“Unbounded Regard”: Frederick Douglass and Adventists 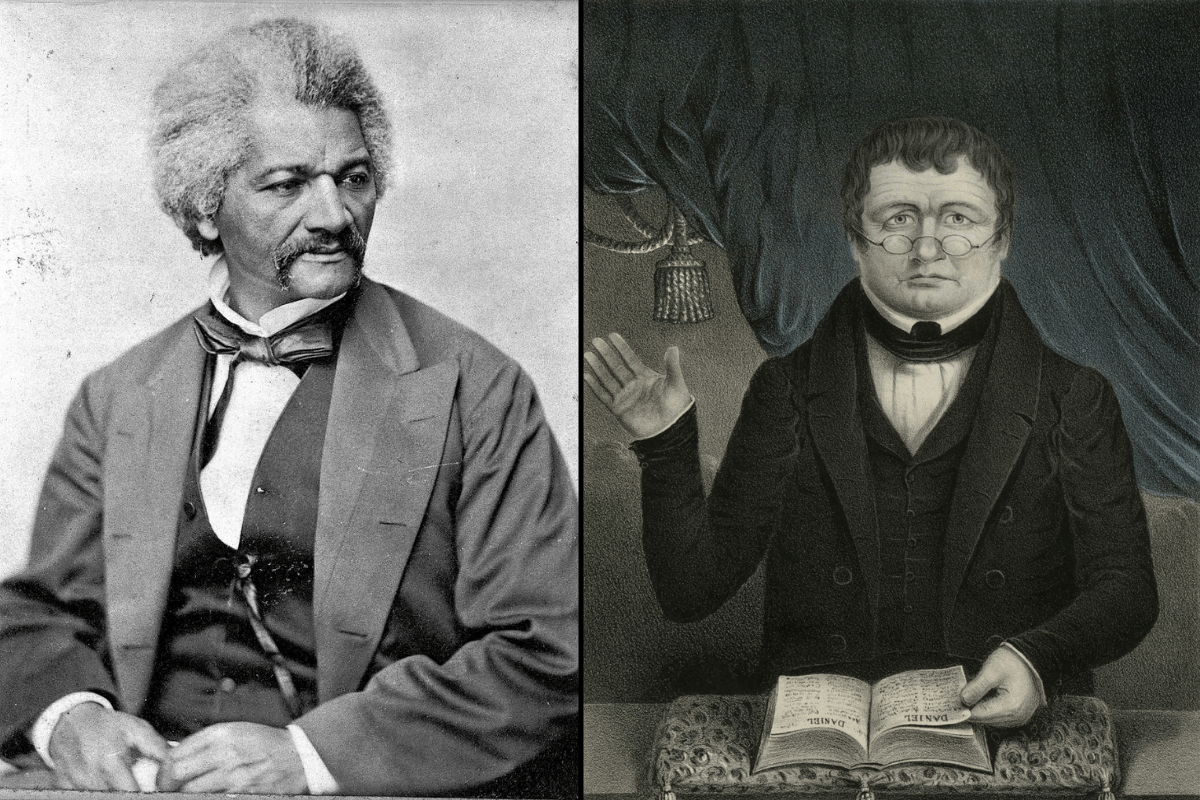 Note: This article was written after a discovery by Kevin Burton of a Frederick Douglass statement on William Miller in an 1883 speech. The following article is a summary of what we know of Douglass’ relationship with Millerites and Seventh-day Adventists.

The great American Frederick Douglass maintained a close relationship with Adventists throughout his fascinating and eventful life.

Although enslaved from birth in Talbot County, Maryland, early in life Douglass learned of the second coming of Christ. Here are his memories as a 15-year-old witnessing the Leonid meteor shower in 1833:

I witnessed this gorgeous spectacle, and was awe-struck. The air seemed filled with bright, descending messengers from the sky. It was about daybreak when I saw this sublime scene. I was not without the suggestion, at the moment, that it might be the harbinger of the coming of the Son of Man; and, in my then state of mind, I was prepared to hail Him as my friend and deliverer. I had read, that the “stars shall fall from heaven;” and they were now falling. I was suffering much in my mind. It did seem that every time the young tendrils of my affection became attached, they were rudely broken by some unnatural outside power; and I was beginning to look away to heaven for the rest denied me on earth.[1]

Douglass included this reminiscence in his autobiography, and it was quoted in the Adventist Review.[2]

After he escaped from slavery, Douglass became a powerful abolitionist. As an antislavery speaker and activist, he often worked beside Millerites in defeating the peculiar institution and systemic racism in the nation. Douglass spoke at Chardon Street Chapel, where Joshua V. Himes pastored and Millerites held meetings, and there denounced racial segregation in Christian churches.[3] Himes and Douglass both attended the Evangelical Alliance in England in 1846, and Douglass publicly praised Himes for his speech opposing the admission of slaveholders to the Alliance. At a later event Himes would lecture after Douglass.[4] Douglass also attended an antislavery society meeting with Charles Fitch, making remarks after Fitch opened the meeting with prayer. Notably, Douglass and Fitch both denounced racial segregation on public transportation at that meeting.[5] In 1842 Douglass founded a reform society with at least four Millerites.

Frederick Douglass expressed great respect for several Millerites. He called Black Millerite leader John W. Lewis  “one of the oldest and ablest advocates for human freedom ever raised up among the colored people of the United States.”[6] William Watkins, Jr., a member of the leading Black Millerite family in Baltimore, Maryland, served as an apprentice to Douglass in the 1850s. Luther Boutelle, a prominent Millerite from Groton, Massachusetts, was a friend of Douglass, although Douglass did grow upset with Boutelle and others from Groton, believing that their zeal for the end of the world had dampened their enthusiasm to reform the present world. Nevertheless, he spoke to a group of Millerites at Groton and declared “unbounded regard” for the second advent believers who “have maintained their ground amidst storms of ridicule, floods of abuse, and flames of malicious persecution, and are certainly entitled to all the credit attaching to deep and abiding sincerity of heart.”[7]

In the early 1850s James and Ellen White's Review and Herald office was just across the bridge from Frederick Douglass' workplace in Rochester, New York. They were almost certainly acquainted with each other. In fact, the paper which the Whites published in Rochester, the Adventist Review, would consistently update its readers on Douglass’ exploits throughout his life.

Douglass would speak of Adventists to his audience, as well. In a speech delivered on April 16, 1883, he fondly referred to William Miller and his movement:

When father Miller proved by the Bible, from whose pages so many things have been proved, that the world would come to an end in 1843, and proved it so clearly that many began to make their robes in which they were to soar aloft above this burning world, he was asked by a doubting Thomas, “But father Miller, what if it does not come?” “Well,” said the good old man, “then we shall wait till it does come.”

The colored people of the United States should imitate the wisdom of father Miller, and, wait. But we should also work while we wait. For after all, our destiny is largely in our own hands….[8]

When Frederick Douglass died in 1895, he was eulogized in the Adventist Review. Review Assistant Editor M. E. Kellogg perhaps echoed the sentiments of many Adventists when he wrote of Douglass:

His eloquence was his greatest gift, and he used that wonderful gift with which God had endowed him to voice the wrongs of his race, and he was regarded by his people almost as a Moses who had been commissioned of God to lead them from bondage to liberty. He had a kindly heart, and often of late years he has gone back to the old plantation where he was a slave, and with the sons of his former master, who were his friends, has revisited the old scenes, and renewed, as far as he could, the acquaintances of his early life. He will ever stand out in bold relief as a great and unique specimen of American manhood and greatness, and besides being honored by fitting monuments in marble and bronze, a grateful people will hold him in loving remembrance.[10]

Editor's Note: The article has been updated to better reflect the location of the Review and Herald office in the 1850's.

Douglas Morgan is a graduate of Union College in Lincoln, Nebraska, and the University of Chicago (PhD, History of Christianity with an emphasis in American religious and social movements). His current projects include serving as an assistant editor of the Encyclopedia of Seventh-day Adventists and his recently published book from Oak & Acorn Publishing, Change Agents: The Lay Movement that Challenged the System and Turned Adventism Toward Racial Justice.

Kevin M. Burton (MA Andrews University, 2015), is a PhD student in the American Religious History program at Florida State University. His research concentrates on Seventh-day Adventist history, with particular interest in the issue of authority.