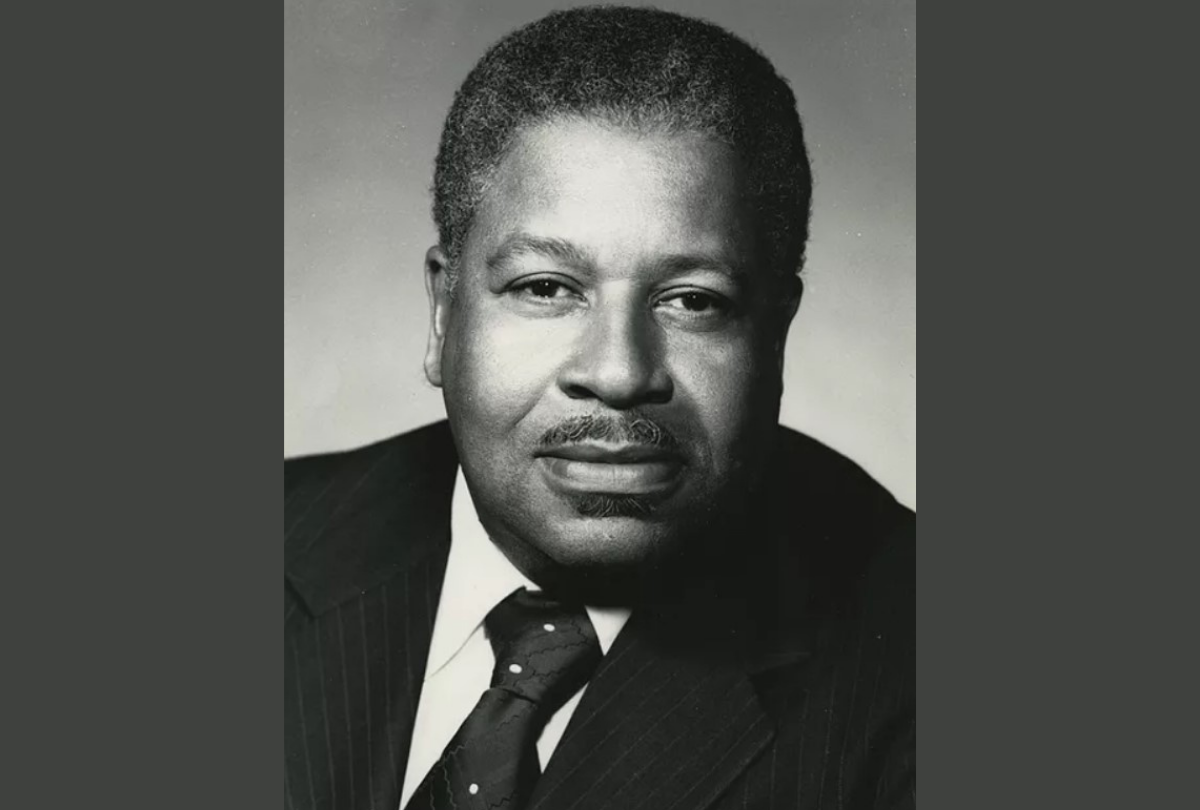 On September 9, 2021, Elder Charles Bradford, known affectionately as “Brad,” passed to his rest. He was a giant of Adventism, certainly one of the church’s most important figures of the 20th century. This is blacksdahistory.org’s memorial to him.

Editor's note: You can watch the video below, which includes images from throughout Bradford's life, or continue on for a text version.

Charles Edward Bradford was born in Washington, DC, on July 12, 1925, to Etta and Robert Bradford. Etta Elizabeth Littlejohn was born in Vicksburg, Mississippi, in 1883, and she became an Adventist from Bible studies on the Morning Star boat. She was one of the first 16 students to attend Oakwood at its opening in late 1896. From there Etta attended Melrose Sanitarium near Boston and for a while was a part of the caregiving staff for an elderly Ellen G. White. Brad stated, “My mother exerted the greatest influence on my life.”

Etta met her spouse Robert Lee Bradford at Oakwood. Robert was born in Athens, Alabama, in 1882. He was a part of a corps of early Black Adventist ministers who laid a solid foundation for Adventism among African Americans. Robert pastored and did evangelism in Kansas City, Little Rock, Omaha, Houston, Philadelphia, Cleveland, Washington, D.C., Richmond, Roanoke, and greater New York.

Etta and Robert’s son, Charles Edward Bradford, was one of eight children. He attended Oakwood University, where he decided to study for the ministry. In fact, when an interviewer asked him, “What made you decide to go into the ministry?” his reply was quick and simple: “Oakwood College.”

On May 23, 1948, Brad married Ethel McKenzie, who at the time was an administrative assistant for the South Atlantic Conference, a charter staff member for the conference when it began in 1946. Brad said of Ethel, “She is the great joy of my life. … I can’t say enough about Ethel.” The couple had three children, Sharon Louise Lewis, Charles, Jr., and Dwight. They had been married for more than 73 years when Brad recently passed.

Bradford began pastoring in 1946, and for 15 years ministered in Monroe and Baton Rouge, Louisiana, St. Louis, and New York City. During this period, he began perfecting a folksy yet highly intellectual oratorical style that would become his trademark.

As a pastor-evangelist, Bradford had great success leading churches and winning souls. He was one of hundreds of pastors who made regional conferences not only viable but exemplary in a time of considerable uncertainty about the fate of the separate conferences plan, and really, the fate of the world—with nuclear proliferation, wars, independence revolutions, and the American civil rights movement.

For Brad, the Seventh-day Adventist Church would always be about the local congregation, the people coming together to worship, fellowship, and minister. He would explain that rainforests are vital to the ecosystem, the jewels of the earth and the world’s largest pharmacy. They are responsible for 28% of the world’s oxygen turnover and have been called the earth’s lungs. More than half of the world’s species of plants and animals are found in the rainforest.

And Brad called the local congregation the rainforest of the Seventh-day Adventist movement.

He stated repeatedly: “No church member is a second-class citizen or a minor.”

The church member keeps the church running. “I love it when a little old lady comes to the General Conference complex and looks around and says, “I’m just looking to see how you are taking care of my property,” Brad would say.

Whatever his position in leadership, Brad remained a pastor of the local fellowship at heart.

At 36 years old, Brad became the fourth president of the Lake Region Conference and held the position for nine years. Under his leadership the conference saw unprecedented growth, increasing in membership by 80%. In this decade of racial upheaval in the United States, as president Bradford directed Lake Region’s churches—most in urban areas with large Black populations—to meet the needs of their communities in practical ways, with a special focus on strengthening the Black family.

Within the church, Bradford privately and publicly prodded church members to address the racial crisis. In 1966 he wrote a paper to the General Conference session on the great need for the Adventist Church to engage in improving the condition of Blacks in America. Among other things, he stated: “The Negro Seventh-day Adventist is perforce affected by the tension and the drama of his people’s struggle for justice and equal rights. Half measures and token gestures do not satisfy now.” Bradford set out an 8-part program for Blacks for the church to carry out.

Bradford was a Black Adventist leader that seemed to transcend race, as unlikely as that sounds, and whose rise showed that the “Blacks-are-only-fit-to-lead-Blacks” notion was being challenged in the church. His ability as a leader was undeniable, his oratorical and communication skills impeccable, and his commitment to the church’s mission unassailable. In his latest book reflecting on more than 70 years of ministry, Brad states, “I have a lifelong romance with the Seventh-day Adventist movement. Right or wrong, my church. I am a ‘company man.’”

In 1979 he shattered the glass ceiling by being elected president of North American Division (NAD), the birthplace of the Seventh-day Adventist Church and its most influential division. Yes, Bradford was the first Black president of the NAD, but technically he was the first president, as until 1980 the NAD was a part of the General Conference and not a separate division.

In his 11-years as NAD president, Bradford would lead the NAD into autonomy. In truth, his appointment was one of the most significant developments in Adventist race relations. Only 35 years earlier, Blacks had no leadership positions other than among their own race, and the church was systematically segregated well into the 1960s. This may be the point when it can be argued that the church was finally making genuine attempts to be racially inclusive, by putting a Black man into the most powerful position in the church (after the General Conference executive officer).

Brad was an effective NAD president. His pastoral manner and servant-leadership style were well tuned for a division that was transitioning and coming into its own. Despite the relative prosperity of the United States, the church in North America faced significant challenges. Brad guided the NAD to remarkable growth in membership, focusing on neglected and previously marginalized groups, reclaiming inactive members, supporting global missions, empowering local congregations through lay involvement, increasing the role of women in ministry, developing lay and humanitarian ministries, addressing challenges in Adventist education, making improvement in race relations, and navigating doctrinal crises.

At the GC session in 1990, Brad retired a beloved figure, a figure who influenced, mentored, and blessed hundreds of thousands around the world.

Brad had a long and active retirement. In 1992 he was inducted into the Martin Luther King Jr. Board of preachers at Morehouse College. Always a popular author, he published five books in retirement and was the subject of a biography.

One of his most enduring contributions, for me, is his vision for the Sabbath in Africa Study Group. As NAD president, Brad had spoken to missionaries who served in Africa of encountering African peoples who already knew of the seventh-day Sabbath. Brad had also read the portions of the Great Controversy in which Ellen White spoke of the kingdom of Ethiopia that had the light of the Sabbath while Europe was in darkness in the Dark Ages. He saw that Christianity was again shifting to Africa as its center, and he wanted to show that this was a reiteration of the past instead of a novel thing. In 1999 Brad published Sabbath Roots in which he highlighted the preservation of the seventh-day Sabbath and the faithfulness to God of African Christians. This work preceded the works of many evangelical scholars who later picked up on the topic. With others, Bradford formed the Sabbath in Africa Study Group—distinguished scholars who have published original research on African Christianity and given seminars around the world sharing their findings.

In honor of Charles Bradford and two other Adventist legends, C.D. Brooks and E.E. Cleveland, Oakwood University established the Bradford Cleveland Brooks Leadership Center on the campus of Oakwood in 2007. The BCBLC’s mission has been to provide servant leadership training for future and key leaders, continuing the legacy of its three namesakes.

In his retirement, Bradford continued to speak around the world and share his vast knowledge with the Church’s current and future leaders, and to connect with the heart of the Church—its members.

Brad’s tenure as NAD president did so much for the Church and its leadership. One aspect of that is race relations. Although not everything is directly related, after Brad became president in 1979 there have been 12 Black presidents of unions in the NAD. In 1990, George Brown, a Black man, was nominated president of the General Conference. And, just recently, G. Alexander Bryant was elected president of the NAD, the second Black president.

Already considered one of the church’s premier ecclesiologists, in 2017 the 92-year-old churchman Brad published a book laying out his vision for the church going forward. It is a clarion call for the church to be about its mission more than ever in today’s turbulent world. Here are some more memorable excerpts:

“The most urgent theological task before us today is to understand what the church is all about and model it—make it visible.”

“At the center of our theology is a God who suffers with His children.”

“We are long on proclamation and short on relationships … For all of our history we have done a great job in defining doctrine and defending the faith, and ordering church life … But I cannot bring to mind any extended prime time given to the study of the church as a relational, end-time community. Why not now?”

The book shares the thoughts of a man in love with his church, who wants it to fulfill its God-given mission of loving proclamation in relationships so that Jesus can come at last.