The State of the Pacific Union The election of Sandra E. Roberts as executive secretary by the delegates at the 31st quinquennial constituency session of the Pacific Union Conference makes her the first ordained woman to hold this position in the Seventh-day Adventist Church.* On August 16, she received 57 "no" votes and 275 "yes" votes to join newly elected President Bradford C. Newton, Treasurer Stephen V. Mayer, and Vice President Leon B. Brown, Sr., along with the newly renamed vice presidents for Specialized Ministries and Education. They are, as North American Division President G. Alexander Bryant said, "the most diverse group of officers in the history of the Pacific Union." In his farewell address the night before, retiring President Ricardo Graham, who served in the role since 2007, set the tone for Monday’s historic vote by reminding the constituents of how God had led them successfully beyond the tense 2012 vote on women’s ordination. With his usual relaxed speaking style and wry sense of humor, Graham noted four out of the seven conferences in the Union have chosen to ordain and “we all still get along.” Then speaking with conviction, he stated: “Ministry has not ceased because women have been at the table. It has been enhanced.” During a concise speech that included some tender anecdotes and a call for biblical social justice, Graham received several rounds of applause and an opening standing ovation that visibly moved him. Graham also led a round of congregational singing with Bradford Newton on the piano, a representation of their close relationship and the coming transfer of power—an astute understanding of symbols in Adventism. The outgoing president noted that the hymn, “We Have This Hope,” was first sung inside the Pacific Union at the 1962 San Francisco General Conference Session. 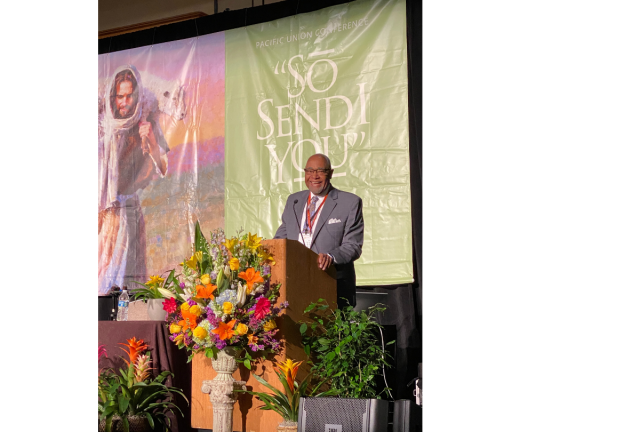 On Monday, after the Union officer votes, Newton turned over his presidential role of chairing the meeting to Roberts so that he could “wear his other hat” and explain various changes to the bylaws now up for a vote. The first was an amendment that focused on changing the term “ethnic coordinators” to Vice Presidents for Specialized Ministries. This is when formal debate heated up, specifically around the traditional term “Regional Ministries.” With some impish elan, Northern California Conference President Marc Woodson led a delegate debate to change the term due to perceptions of datedness and lack of ethnic specificity. The first alternate wording offered, “African-American,” was then critiqued for being too specific. Two “Regional Ministries” leaders spoke-up, including Virgil Childs from the Union, arguing that keeping the current terminology aligns with the rest of the North American Division and had been maintained to be more inclusive. But they were lone voices, and when a final vote was called, a new title, Black Ministries, overwhelmingly won. Bradford Newton indicated that he plans to create a new president’s cabinet in which the respective vice presidents of Black, Hispanic, and Asian Pacific ministries, along with the also elevated vice president for Education, will join the executive officers in leading the Pacific Union.

While most of the session can feel like the delegates are present merely to rubber stamp (accept, reject, or refer back) the nominating or bylaws committees’ report or motions, actions like this demonstrate the power that lies at a constituency’s disposal. With a few two-minute speeches and a vote, a majority of delegates changed, against a vice president’s will, his department name and title. The top four officers stayed out of the debate, signaling they were going to follow the will of the assembly. 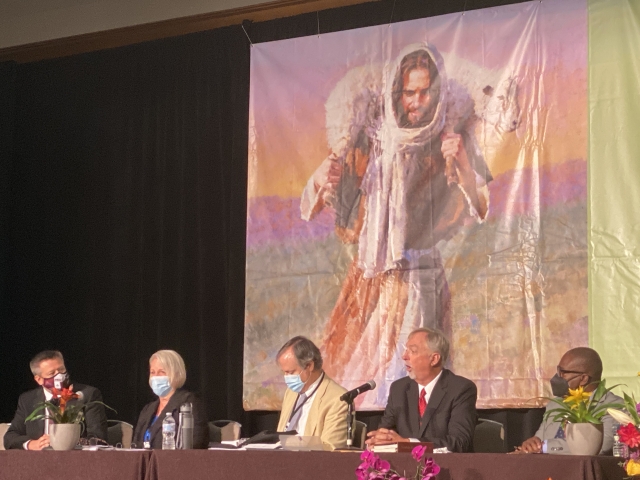 This two-day meeting in Tucson, Arizona, continues the progressive diversity narrative of the Pacific Union as the constituency marches forward in its pioneering support for women in leadership. But evidence of the challenges in being united appeared throughout the time together, often in smaller settings, as questions of ethnic identity and leadership representation clearly occupied the minds of many delegates. During an information session on education, several attendees expressed shock that no demographic data is collected on enrolled students, as per NAD policy. In a pre-meeting about the bylaws, a conference leader wondered aloud if there will soon come a day when so few white Adventists will be in his territory that a White Ministries coordinator, with a mission emphasis on anti-racism, might be warranted.

Another group that called for change were some delegates in their twenties and thirties. One spoke at the microphone to call for more representation. Another pointed out the dramatic decline in enrollment in Adventist schools. She said maybe something radical is needed and asked what would happen if Adventist schools were tuition-free. This was answered with a few bemused-parent-like tight-lipped head nods and dismissive language. But an academy principal sent over a text: “Education seems to consistently be unsuccessful based on numbers but the Union continues to try the same strategies and are not open to outside the box ideas.” Another person involved in education indicated excitement, in part, because an open conversation almost happened. “I get that Constituency sessions aren’t times for major discussion and decisions with hundreds in the room. But, I am struck by the agenda and how irrelevant it really is to what is happening at the local level.”

The Financial Report was detailed and clearly showed that the Union’s financial standing is “very solid” thanks in part to a ten-year trend of consistent tithe growth, including during the pandemic. But after that a concerning downward spiral of disrespect for everyone’s time happened in the last hour. The institutional reports went from good to bad to nil. Principal Pedro Ojeda shared personally about the Holbrook Indian School and had a short video that was very moving about how they use equestrian facilitated learning to help students who have suffered abuse. Dr. Joy Fehr, president of La Sierra University, briefly introduced a well-produced video detailing the school’s many successes. Pacific Union College was represented by two administrators who explained that the brand-new president, Dr. Ralph R. Trecartin, was busy moving and couldn’t come. They said things are looking up, and student enrollment appears promising (it’s lost about 40% in the last six years). A video introducing the president was screened, but some of the mise-en-scène was askew and it felt like a mockumentary version of the institution-PR genre. Finally, no senior leaders from Adventist Health came due to a pandemic-related travel ban. What would have been the fourth film had been sent. Mindful of the delegates’ time—the meeting had run into the lunch hour—Bradford Newton suggested that everyone watch it later online. An idea for institutional leaders: this meeting occurs once every five years. In this room you have hundreds of alumni and family members of your employees. The constituency through its leaders appropriates millions each year. Email everyone your videos. Be present. Share your vision. Take some questions. Be real.

Perhaps the minority interest group most muted were those representing the fundamentalist leanings of current General Conference President Ted Wilson. No one spoke to oppose anyone from the nominating committee report. Conservative comments came instead during a vote on an amendment to fix some legal language required by the State of California in case of organizational dissolution. One angle taken was that because Adventism is the remnant church it’s therefore doctrinally impossible to entertain the idea of what should happen to the Union’s assets if the organization were to end. Another concern was expressed because of a language change that sent any remaining assets to the next highest organization, the NAD, instead of the GC. Was this a sign of something politically sinister? It took a few explanations but the fact that the NAD is a division of the GC finally sunk in. Although only anecdotal, this focus on textual slippery slopes possibly reveals the threadbare hermeneutical approaches that remain for fundamentalist Adventists who tied themselves to opposing women’s ordination. Ministry continues. They were wrong. The meeting worked. Another transfer of power was approved by the delegates, and a representative of its largest group, women, is in executive leadership for the first time. Even so, issues of identity and representation swirl among the seven conferences that make up the Adventist church in the American Pacific Southwest. Yet against many challenges, the state of the Union appears strong—not despite its diversity but as it strategically incorporates varying constituent voices in more than a hopeful congregational song.

*Audrey Andersson, current secretary of the Trans-European Division, was previously the secretary of the Swedish Union, but unlike her, Sandra Roberts, who has been president of the Southeastern California Conference since 2013, holds her administrative position as an ordained minister due to the 2012 Pacific Union constituency vote.