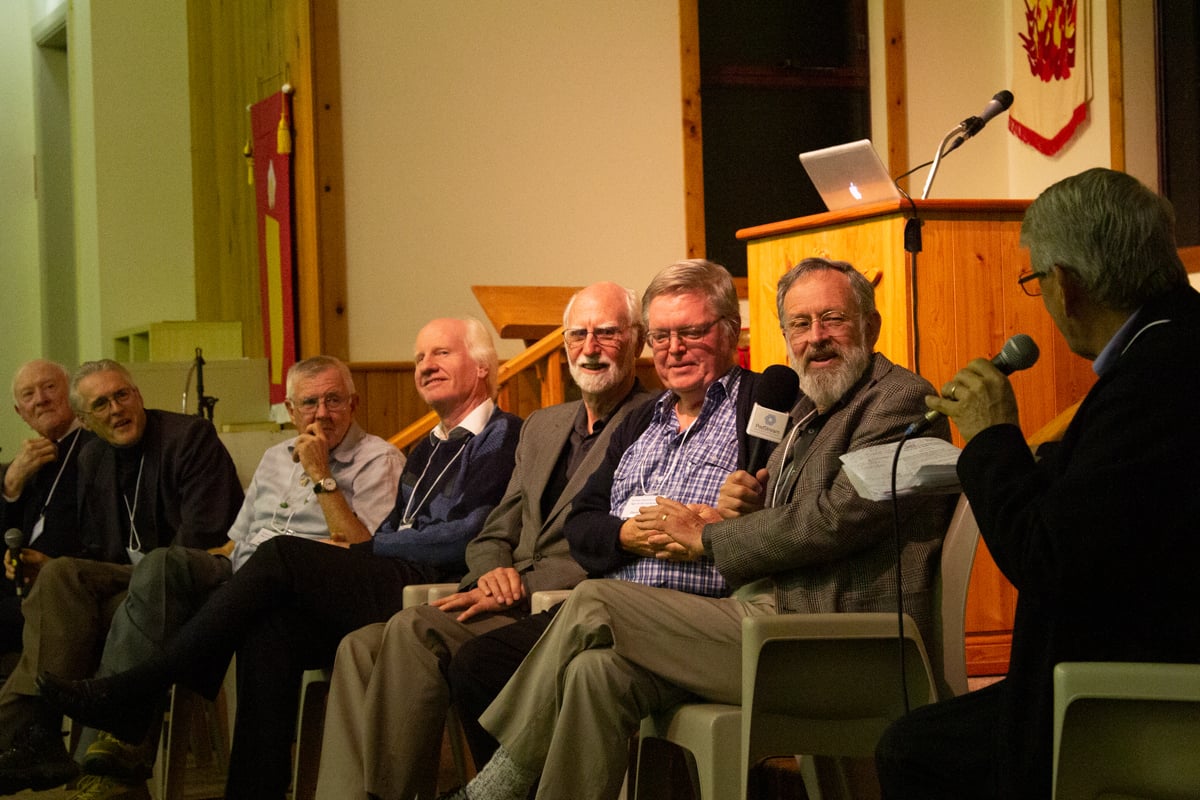 In addressing questions around its topic, Sydney Adventist Forum’s “Age of Life on Earth” Conference acknowledged the tensions between key theological assertions and apparent scientific conclusions. “But we have to live with these tensions,” reflected conference convenor Dr. Lynden Rogers, “rather than resolve them cheaply.”

As such, the various papers presented at the conference addressed the three key questions of how best to read the biblical accounts of the creation of life on earth, how best to understand current scientific understandings that might support or challenge these readings, and how to hold these two streams of knowledge.

“We are honestly trying to be fair to data and give every case the best possible utterance,” explained Rogers, a recently retired lecturer in physics and president of Sydney Adventist Forum. “Not everyone will agree, but Forum puts up ideas and if people don’t like them that is okay.”

Hosted at The Church in the Trees in Morisset, in the Lake Macquarie region north of Sydney, on June 11 and 12, the conference attracted about 90 participants onsite with a further 50 registered to participate from around the world via the livestream of the sessions. Because of COVID-19 restrictions and limited venue availability, the conference was condensed from its original three-day format into two days, with three major presentations and papers made available to participants in the week leading up to the conference.

“We were desperately trying to host an event that would be inclusive and foster dialogue,” said Rogers. “And many of the participants have responded positively to us in the conference’s immediate aftermath.”

The papers from the “Age of Life on Earth” conference—with extended treatments of the presentation topics—are planned for publication in book form within an anticipated 12-month time frame. “The book will allow us to shape some rough edges and to improve the presentation of some of the topics from the conference,” Rogers added.

This and a following report offer a summary of the key presentations, first from the pre-conference papers:

“Arguments in Favour of a Recent Age for Life on Earth” — Dr. Lynden Rogers

Rogers invited a number of academic defenders of more traditional Adventist approaches to contribute papers or presentations to the conference, without positive response. Wanting to represent these perspectives in the collective thinking of the conference, he prepared and circulated an overview paper that presented the theological assumptions, geological arguments that might support a young earth and thus a recent age of life, and biological objections to an older age of life. “Individually and in combination,” Rogers’ paper concluded, “these considerations suggest to many Seventh-day Adventists, among other evangelical Christians, that life on Earth is young by conventional scientific timescales, and is likely to be less than 20,000 years.” Having prepared these arguments, he again sought and received some input from key scholars—and repeated his invitation for these thought leaders to participate in the conference, even if only by attendance.

The conference’s keynote speaker recorded his presentations, being unable to attend in person because of COVID-19 travel restrictions. Professor Rudy Van Moere is emeritus professor of Old Testament and Biblical Hebrew of the Faculty of Protestant Theology at Brussels University, and emeritus pastor of the Adventist churches in the Netherlands and Belgium–Luxembourg.

He focused on the creation narrative of Genesis 1:1–2:4a, pointing out that the authors were not historians or journalists but storytellers, pastors, and educators. “It is necessary and indispensable to read biblical narratives accurately, defining their genre and the context in which they were written,” he urged, before proceeding to do this in remarkable detail. His first presentation highlighted repetition in Genesis’ narrative text but also the key instances that break the cycles of repetition. He pointed out the many patterns of sevens in the narrative and also in the literary structure of these texts. This emphasizes the centrality of the Sabbath motif and the centrality of the creation of humanity in the image of God. 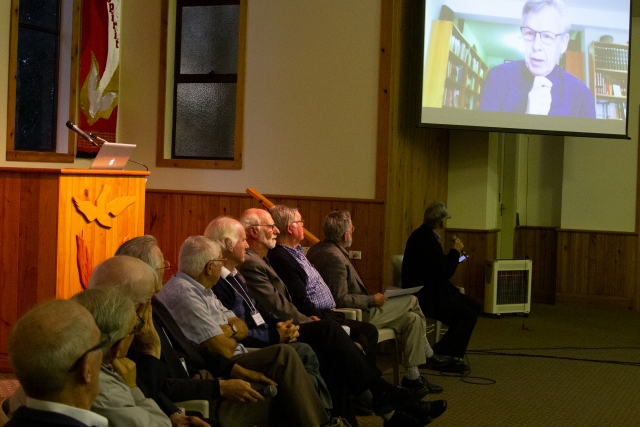 Van Moere summarised the agenda of the creation narrative as three dimensional: to glorify God as creator, instruct humanity as to their identity as created in the image of God, and to assign man and woman their roles to procreate and take care of nature. He also drew attention to the “remarkable” literary parallels between the Creation narrative and the Abram narrative later in Genesis. He concluded the first part of his presentation by describing the Creation narrative as a “begetting” narrative that echoed the claims of the Hebrew people being a special work of God, a blueprint for understanding Israel’s origins and existence.

Van Moere began his second presentation by seeking to place the Hebrew creation narrative among the literature of the ancient Near Eastern world, referencing and comparing Egyptian and Mesopotamian creation narratives, which he argued would have been known by the notional writer of the Genesis narrative. Such a comparison “teaches the readers how completely different Israel’s God is from the gods of the Egyptians and the Babylonians.” It is not defensive or apologetic in nature but encourages Hebrew readers in their belief in the God of Israel, strengthening them in their identity and urging them to trust in their God. This offers “a completely different view of the world, God and humanity.”

Turning then to the larger literary structure of the Hebrew scriptures, Van Moere’s analysis identified the “Enneateuch” that includes the five books of the Pentateuch plus the books of Joshua, Judges, Samuel, and Kings in a larger literary narrative of Israel’s history that might have been composed by either one author or a group of scholars or editors. If we accept this larger structure, the books would have been composed or compiled after the fall of Jerusalem in 586 BCE, which fits at the end of this large narrative. This gives an insight into the context and concerns of the authors and audience of these narratives. It was an experience of great national loss and faith trauma, giving rise to urgent questions about the God they claimed and the future of their people. As such, these nine scrolls provide answers, comfort, and hope in re-telling these narratives.

Reading these texts with an understanding of this context and hearing it in the voice of a pastor and educator, the narratives affirm the power and trustworthiness of their God and their special role as God’s people. Van Moere urged that reading the Creation narrative in isolation from this larger literary context can lead to “an inadequate and even contrary interpretation of the first Creation narrative.”

Van Moere concluded that the Creation account of Genesis 1:1–2:4a should not be read literally or as a religious myth; instead, it is narrative theology. It should be understood as an affirmation of faith in God, without detailed or scientific information of the how and when of Creation. It also assigns specific roles to human beings in this created world. Van Moere argued that approaching this text with scientific questions several thousand years later is inappropriate, and that using this text as a basis for debate between proponents of young-earth creationism and older-earth creationism—or even a debate between creation and evolution—is pointless.

More than 11 hours of videos of the presentations from the “Age of Life on Earth” Conference can be accessed (at the cost of online participation in the conference) by clicking here.

Click here to read part two of this report.

Nathan Brown is an author and journalist, as well as a book editor at Signs Publishing Company, based in Melbourne, Victoria. He attended the "Age of Life on Earth" Conference as a guest of Sydney Adventist Forum, although via livestream because of COVID-19 travel restrictions, and reports on the event in the capacity of an independent journalist.