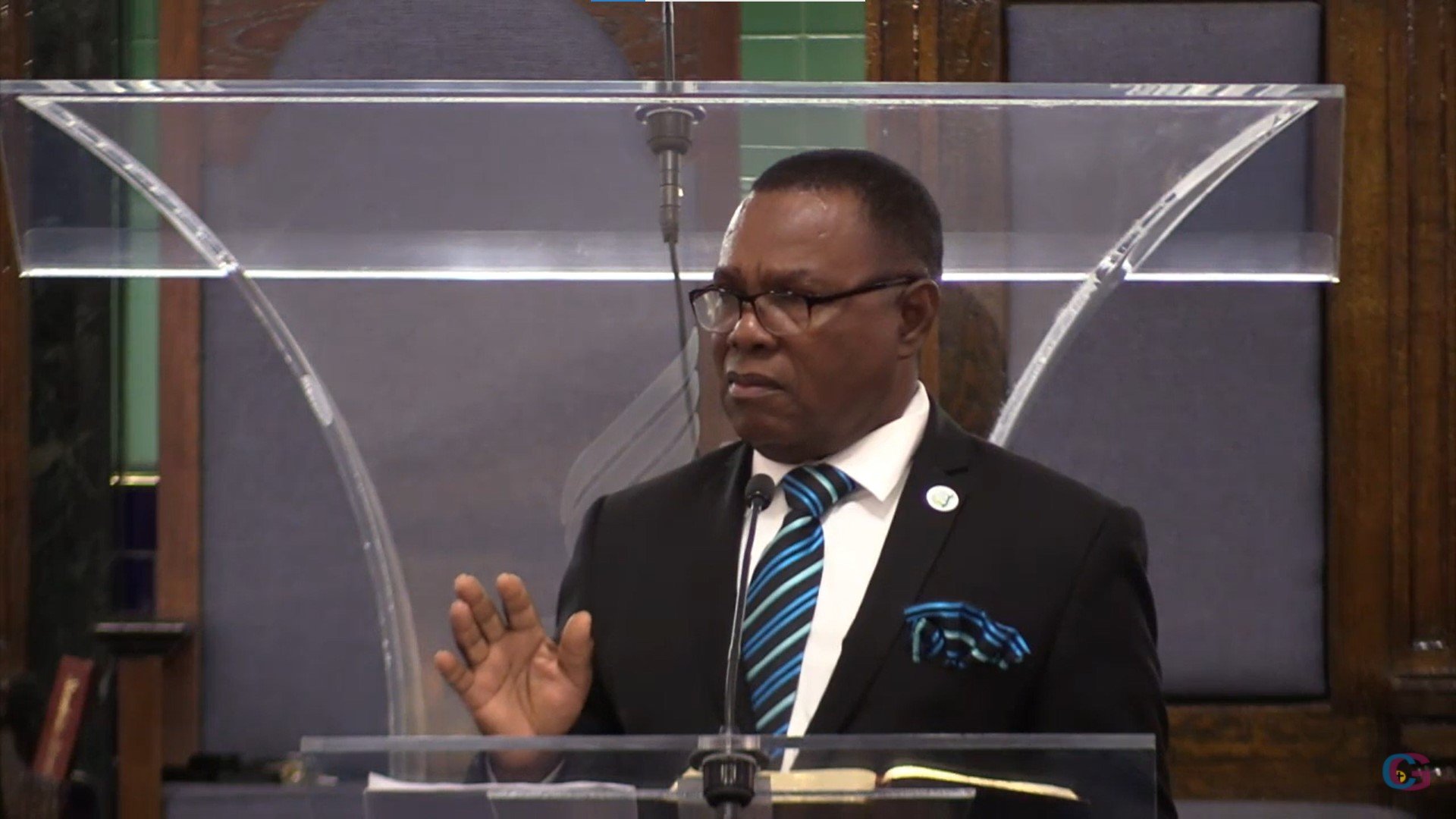 Dr. Burnett L. Robinson, former senior pastor of the Grand Concourse Seventh-day Adventist Church, resigned on November 24. Robinson had been put on leave after telling his congregation that “the best person to rape is your wife” during a sermon preached on November 13. In the sermon, Robinson said that married women belong to their husbands and falsely suggested that raping one’s spouse is legal.

“The Greater New York Conference of Seventh-day Adventists recognizes many have been deeply harmed by the sentiments expressed by Robinson,” the local church organization that had employed him said in a statement on Wednesday. “The views he expressed are wrong and not accepted by our church. Rape and sexual assault of women are crimes and should always be treated as such.”

The conference went on to express contrition, saying, “We humbly apologize and ask for forgiveness.”

Although Robinson made the statements on November 13, it wasn’t until a week later that they brought widespread condemnation, after a clip of the video began to circulate on social media.

According to a spokesperson, leadership of the Greater New York Conference was unaware of Robinson’s statements until they were alerted via an email sent on Saturday, November 20, and opened the next day. Conference leadership then scheduled a meeting for Monday morning, and by the end of the day, Robinson had been placed on leave.

Clips from Robinson’s original sermon were saved online, allowing the remarks to gain widespread coverage and condemnation. The sermon was originally broadcast on the Grand Concourse Church’s YouTube page, but at some point was removed.

Sarah McDugal was one of the people who saw Robinson’s comments and was outraged. McDugal is an abuse recovery coach for women in faith communities through her organization Wilderness to WILD and is the author of Safe Churches: Responding to Abuse in the Faith Community. On Sunday, November 22, someone posted a clip of Robinson’s sermon in a group that McDugal was a part of. Disturbed by the violent message, McDugal shared the clip on her Facebook page to her 32,000 followers. Later, she also published it on her own YouTube Channel.

“It was very concerning to me that it seemed that there had been no action to address it,” McDugal said in an interview on Wednesday. The clip, less than a minute and a half long, went viral on multiple social media platforms. Someone else also started a petition on change.org calling for Robinson’s resignation.

Three days later, the resignation came. While Robinson is no longer employed as an Adventist pastor, court records and another statement made in a past sermon raise further concerns about his conduct.

Robinson joined the Grand Concourse church in 2013, according to the church’s website. Several years prior to that, he lived in Florida, where he also worked as a pastor.

According to court records from Broward County, Florida, on February 23, 2011, a woman filed a petition for an “Injunction for Protection Against Repeat Violence” against Robinson. According to Florida law, the petition can be filed if someone accuses another person of committing repeat violence against them or an immediate family member, defined as two or more incidents that include one in the previous six months.

The relationship between Robinson and his accuser is unclear; the accuser was not Robinson’s wife. The woman could not be reached for comment and Robinson did not respond to calls or text messages.

The judge in the case granted a temporary injunction against Robinson, which was later extended. However, in June 2011 the case was dismissed after the petitioner appeared at a hearing and expressed the desire to “voluntarily dismiss the action.” Public records do not show the content of the allegations.

There are no further records in Broward or neighboring counties of other allegations, and Robinson was never charged with a crime.

When asked on Wednesday if the Greater New York Conference knew about the violence accusation, a spokesperson said that the conference was looking into it.

On August 24, 2019, Robinson gave a sermon titled “In Light of the MeToo Movement.” While the bulk of the sermon addressed the biblical story of David and Bathsheba and condemned David’s actions as those of a rapist, Robinson’s introduction also gave a concerning commentary.

Robinson remarked about the case of Jeffrey Epstein, who had died by suicide a few days prior while awaiting trial for child sex trafficking.

“And all the women are lining up to benefit from his what’s left,” Robinson said, seeming to refer to Epstein’s estate. “I thought about it. In light of the MeToo movement, I need to bring this sensitivity to the church. Because not only are they hounding the rich, they’re hounding the powerful. And they’re hounding the church. Pastor Case and I are not immune to allegations. One hateful, spiteful woman can bring us down, just by looking at them too long.”

The bulk of Robinson’s sermon was about the need for assault to be dealt with, but his short and seemingly extemporaneous remarks about women accusers perpetrate views known to harm victims of sexual assault.

Will There Be Further Repercussions?

Though Robinson has been forced out of his position as a pastor, to Sarah McDugal the focus now needs to be on preventing his employment elsewhere in the church.

“The fact that nothing has been said about removing his membership in good standing according to church policy or about revoking his credentials to make sure that he is never able to work again—it’s appalling,” McDugal said.

Within the Seventh-day Adventist employment system, removal of credentials is a complicated process. According to the General Conference Working Policy, it is the Union Executive Committee that “grants and withdraws credentials and licenses” upon the recommendation from the employing conference. Withdrawing credentials requires a 2/3 vote of the members of the union executive committee. However, some unions have been known to pull credentials pending the recommended action by the union executive committee.

Although the initial statement released by the Greater New York Conference said that Robinson “deeply regrets his statement and knows it caused injury and has given an unqualified apology,” he has also appeared to resist showing contrition. On his personal Facebook page on November 24, Robinson reposted an aphorism that has been widely circulated on social media.

“The world will never appreciate the good you do a million times, but will criticize the one wrong thing you do … don’t get discouraged. ALWAYS RISE ABOVE ALL THE LAUGHTER AND CRITICISM. STAY STRONG.”

Updated 11/25 to clarify the original wording meant to explain that the Greater New York Conference is a local conference in the Atlantic Union, not a Regional Conference. We regret any confusion.

Alex Aamodt is interim managing editor of SpectrumMagazine.org and the Roy Branson Investigative Reporter for Spectrum. You can contact him here.