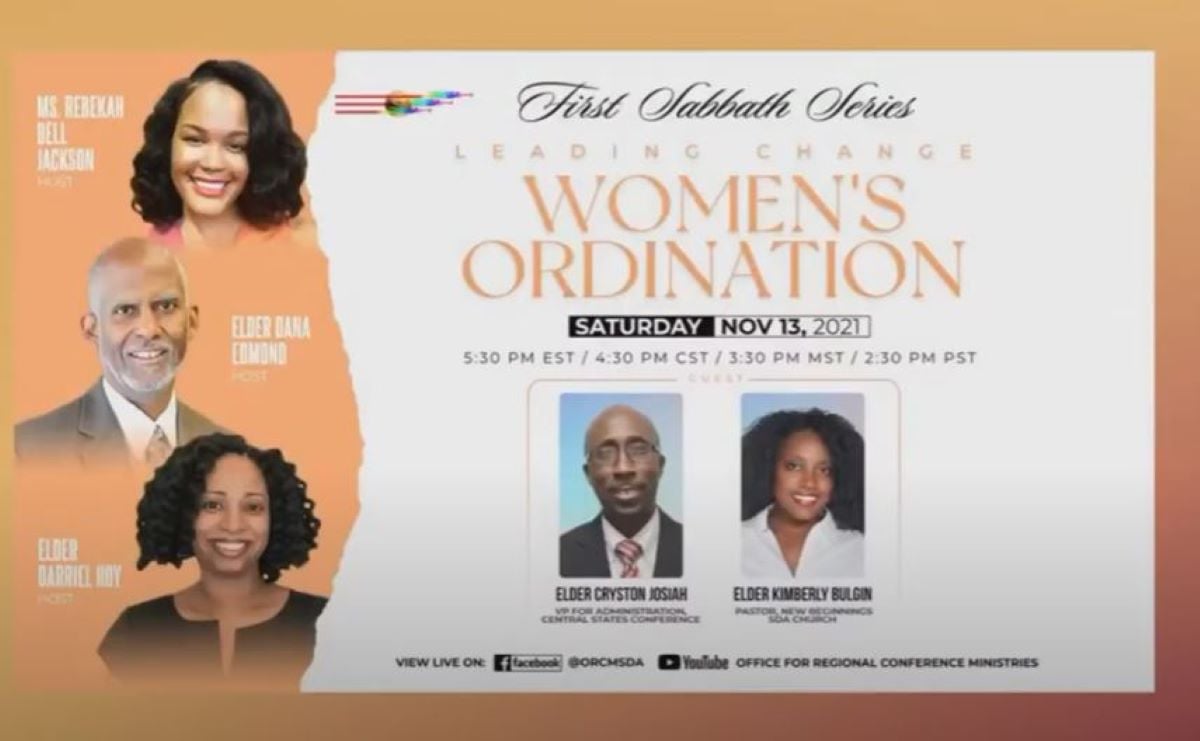 The Office for Regional Conference Ministries’ (ORCM) Executive Director, Elder D. C. Edmond, and Communication Director, Elder Darriel Hoy, both stated with confidence that all Regional Conferences in the North America Division (NAD) are in support of women in ministry and women’s ordination. This was at the ORCM’s monthly First Sabbath livestream series on November 13, 2021, entitled Leading Change: Women's Ordination.

Elder Edmond said, “The leadership in all of our regional conferences across the board is supportive of women's ordination.” He went further, saying “I believe all across North America the overwhelming sentiment, at least in the circles where I’ve been, is where you (Central States Conference in Mid-America Union) are (ordaining without respect to gender). We just need you all to give them the opportunity to start at their own pace.”

On July 3, 2020, Allegheny East Conference ordained two women pastors, Elder Marleena Debrough and Elder Novella D. Smith. This was not shocking as they are within the Columbia Union Conference which already supported ordination without respect to gender and this conference had ordained women prior to 2015. However, Elder Henry J Fordham III, then conference president, reportedly faced considerable opposition for doing so according to his sons, Elder Shawn Fordham of the Mizpah Seventh-day Adventist Church of Philadelphia and Henry J Fordham IV.

On September 12 of this year, Mid-America Union Conference voted to ordain—not commission—women pastors, in part because of pressure from constituents of the Central States Conference. The constituency vote in both the conference and Union was above 80% in favor of equally ordaining qualified pastors irrespective of gender. Elder Kimberly Bulgin of the Wichita, Kansas, New Beginnings Church in the Central States Conference was the first woman ordained on October 23, 2021.

Perhaps as a foreshadow, Elder Darriel Hoy is listed as an ordained minister of the church on the ORCM website despite the fact that the organization’s offices are in Huntsville, Alabama, in the Southern Union Conference, which does not recognize ordinations of women that take place in other Unions. Elder Hoy was originally commissioned, but later her credentials were changed to ordained.

Vice-president of Central States Conference, a Regional Conference of Mid-America Union, Elder Cryston Josiah was interviewed in the November 13 episode of the OCRM First Sabbath livestream event. He shared his thoughts as to why it was not enough for the conference administrators to make an executive decision to ordain women, even when they believe it is Biblically correct. He said he spent considerable time educating his constituency using a 40-slide summary of the NAD’s theological study of ordination and took a constituency meeting vote. (See the slide presentation and Theology of Ordination Study Committee Report ) He thought it was worth the risk of rejection to have the people feel listened to and represented. Elder Josiah said, “When you become a leader you’ve got to lead…I’m not trying to push other unions too hard, but at least you’ve got to have the conversation—begin the process. I think we have to be courageous.”

Elder Hoy supported the inclusion of the constituency saying, “I was very excited to hear that during our president's roundtable in August each of the presidents voiced their support for women's ordination. I also think constituents have a role to play. If it's something that you believe in, constituents have the opportunity to speak with their leaders and say, ‘This is something that we would like to see happen in our conference.’”

The mechanisms of change were also supported by Elder Edmond, “I think we want to be fair and allow (conferences) to work through the same process, because all of our conferences are different. There is a different dynamic in all of them and so we don't want to make it sound like there's a lack of courage, or they are afraid of political consequences.”

Not surprisingly, Elder Kimberly Bulgin, former youth leader was the most passionate. “I just saw another flyer somewhere about an ORDINATION and Commissioning (font size an intentional interpretation of hand gestures). It was just glaringly showing the inequality and the disrespectful nature of having men ordained and women commissioned.

“There needs to be a level of urgency as well; (like there is) around other types of injustice. It’s unethical, it’s immoral, it’s not of God. What’s happening or not happening, that’s allowing this process to take so long?” added Bulgin.

At this Elder Darriel Hoy jumped in, “I want to just add, I’ve been a youth director in two conferences, and when I talk to our youth and our young adults, women's ordination is something that they care about. And people vote with their feet.”

Elder Edmond redirected the conversation to reality by saying, “Just so everybody will know, I am a thousand percent in favor of women’s ordination. What I would want to caution my younger friends is that words matter. Just because you feel strongly about something doesn't make saying something in a disrespectful or accusatory manner helpful.

“It’s easy to assume that people don’t have urgency, they don’t have courage, when you are not fully apprised of the process. And sometimes we can make it harder for people to do what it is they are trying to do,” Elder Edmond added.

It was important to both Elders Edmond and Hoy that they had seen acceptance of women pastors in Africa and been reassured by highly placed African church administrators that they had no problem with women pastors being ordained in the North American Division.

The Office of Regional Conference Ministries support, especially coupled with the fact that Mid-America Union Conference has changed their stance, is the most hopeful movement towards consecrating women pastors to Adventist ministry in a culturally appropriate and equitable manner. It comes from a regionally diverse swath of the United States and suggests significant changes will be requested in the near future. It is significant that Regional Conferences, who are calling for the resolution of racial injustices, have taken these courageous steps, despite inevitable criticism, towards righting injustice for female pastors.

Nerida Taylor Bates is the current president of the Association of Adventist Women. https://www.associationofadventistwomen.com/mission-and-goals