Shortly after the New Jersey Conference shared its women’s convention announcement to Facebook, the backlash began.

“It’s Better If they Say it” declared the convention poster, the bright pink and blue floral background in stark contrast to the neutral tones of the suits worn by the all-male lineup of speakers pictured.

Three of the five listed speakers had topic titles related to the Adventist Church’s official “I Will Go!” strategic plan:

• Dr. Gamaliel Feliciano, “I Will Go, Chosen and Loved”

• Dr. Jorge Aguero, “I Will Go, Listening to His Voice”

Meanwhile, Dr. Claudio Consuegra’s chosen topic was listed as “What Husbands Want Their Wives to Know?” and Dr. Alanzo Smith was slated to discuss, “Healthy Relationship.” 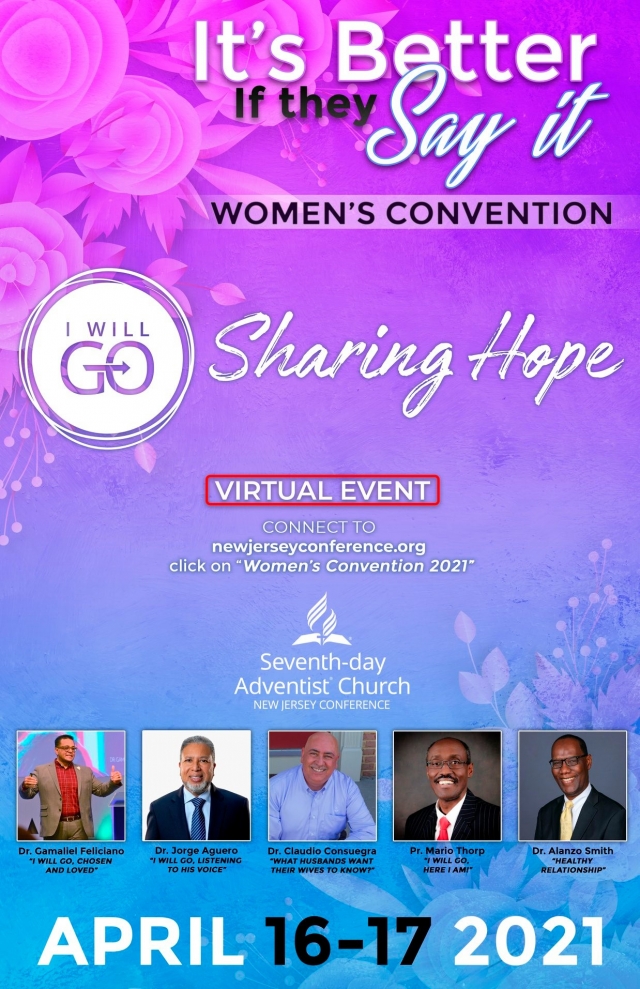 The “It’s Better If they Say it” Women’s Convention poster.

In the brief promotional video advertising the conference, Olgath Thorp, Women’s Ministry Assistant Director, shared that the all-male lineup was intentional: “Our speakers are a group of scholars, all men, who will give their perspective on women.”

News of the convention, originally scheduled for April 16–17, quickly spread far beyond the New Jersey Conference’s territory and constituents.

The original Facebook post and promotional video, which were both published on March 30, didn’t pick up steam until Saturday, April 10, when comments began flooding in. “So this seemed like a good idea to who exactly?!” asked one Facebook user. “Cancel this event, apologize to the people and regroup…. How can you use tithe/offerings to plan an event with a lineup that promotes gender discrimination,” said someone else. “This is a MAJOR fail and totally tone deaf not to mention insulting,” wrote another person.

The Facebook posts quickly amassed almost 300 combined comments, the vast majority negative. One individual, who identified herself as a volunteer Master Guide Coordinator for the New Jersey Conference, posted a lengthy defense of the conference, while admitting the convention could have been advertised differently. “It should have been advertised as a package deal,” she said, going on to note that there would be a Men’s Convention with an all-female speaker lineup in August, though this information had not been publicly advertised by the New Jersey Conference.

A couple commenters on Facebook and Twitter shared screenshots of the Women’s Ministry page on the New Jersey Conference website, where a man, Carlos Torres, was listed as Women’s Ministry Director. This led to further questions and speculation. Patricia Monteiro was listed as Administrative Assistant, and Olgath Thorp and Lilia Torres (Carlos Torres’ wife) were both listed as Coordinators for the department. Both Thorp's and Torres' first names were spelled incorrectly and have since been corrected on the conference website. 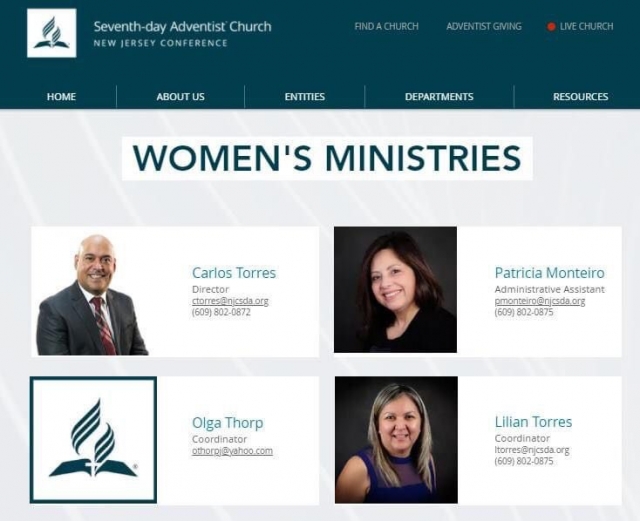 The Women’s Ministry page as it looked on April 10.

On Sunday, April 11, the New Jersey Conference released an apology from Conference President Jorge Aguero, Executive Secretary Mario Thorp, and Treasurer Karen Senecal. “Thank you for reaching out to us regarding the planned Women’s Ministry Convention. We apologize,” began the statement, adding:

“We are saddened by the hurtful impact of our announcement and acknowledge that our plans and communication were not appropriate and very disappointing.

We offer our most sincere apology to all our members and friends for the distress caused by the announcement. Rest assured that this kind of message does not portray who we are or what we believe about the role of women in our denomination, nor was it our intention to denigrate women in any way.” 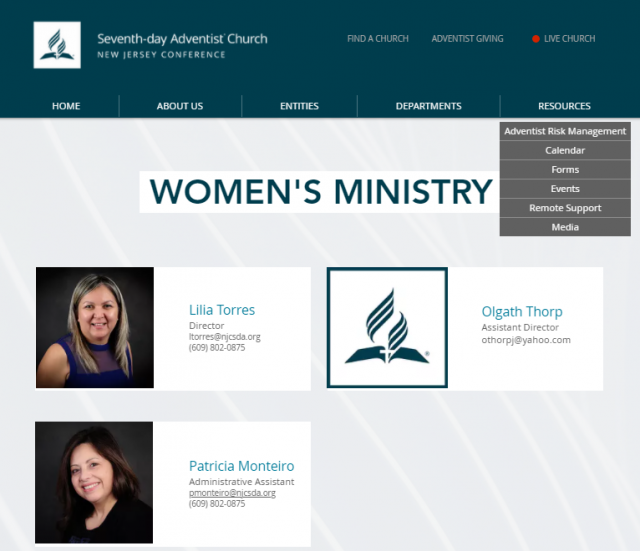 The updated Women’s Ministry page as of April 11.

The statement ended with the announcement that the convention has been postponed as the conference works “to plan a more inclusive event that better represents the needs of our members and friends” and affirmation that “We deeply value the contributions of all women who are helping to fulfill the mission and ministries of the New Jersey Conference and beyond.”

The April 11 statement from the New Jersey Conference.

The statement did not address the rumored Men’s Convention with female speakers, but in a request for comment, Communication & Media Director Anthony Baffi stated that originally a three-part series of virtual events had been planned that “would allow for a healthy exchange of ideas.” He added,

Baffi acknowledged that “advertising simultaneously would have been a good idea, but the initial focus was on coordinating and promoting the first event.” The other conventions are several months down the line, with the Men’s Convention slated for August and the Couples’ Retreat for September.

Baffi said that after the negative response to the Women’s Convention, the New Jersey Conference recognized the need to apologize “because we realize that the idea and theme, as advertised, came across as derogatory and offensive to many people, and we wanted to acknowledge, address and rectify it without delay.” He also stated that all three conventions have been placed on hold while the “approach, theme and topics are being reviewed for obvious reason[s].”

The overwhelming response to the apology has been positive on social media, with many thanking the conference leadership for their quick action and thoughtful statement. Others have been offering their suggestions for female speakers. The New Jersey Conference has been actively responding to both positive and negative comments, thanking individuals for taking the time to offer suggestions and stating they will take them all into consideration. Baffi confirmed that the convention organizers are “giving consideration to all the feedback received.”

All images are screenshots from the New Jersey Conference website and social media accounts.