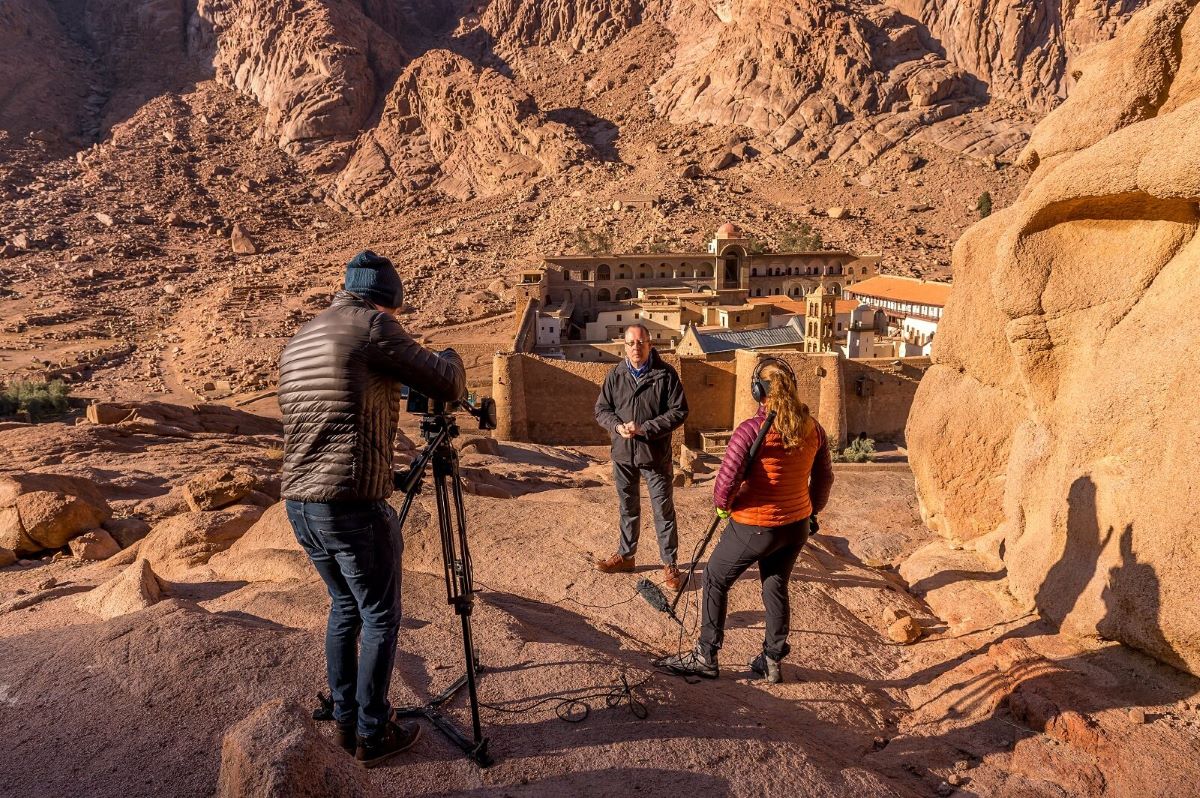 Situated in a remote valley on the Sinai Peninsula stands a small Christian monastery that has withstood the ravages of time and history since 565 AD. It is one of the oldest working monasteries in the world—and is filled with hidden treasures.

Pilgrims and tourists flock there from around the world to visit St Catherine’s Monastery and some will climb nearby Jebel Musa, the traditional Mt Sinai. Few get to visit the vast collection of ancient manuscripts hidden in the monastery library.

The documentary, ‘Codex Sinaiticus: A journey in Biblical discovery’, takes viewers for a rare visit inside St Catherine’s Monastery to meet with Father Justin, chief librarian to a collection of over 2,300 ancient manuscripts. As Father Justin shares the history of the ancient Bible texts discovered there, he states, “These are not just historical texts, these are living texts,” noting how understanding the story makes a significant difference for trust and faith today.

A combined production of Hope Channel Norway and the Trans-European Division, Tor Tjeransen and Victor Hulbert take you on an inspiring journey, not just inside the monastery, but, with a series of shorter video clips, reliving the biblical accounts of Moses and the children of Israel, bringing modern insights to their inspiring—and sometimes distressing—story.

Filming
This was not easy filming. With meticulous preparation, prayer, and perseverance, Hope Channel Norway worked hard to gain all the necessary permissions to visit and film in this historically important but high security region. Even with those permissions it was an answer to prayer to gain entrance past the Egyptian security forces who only recently had turned away a film crew from a major international broadcaster.

Silja Leknes and Sindre Hammersbøen worked tirelessly with camera and sound to give viewers access to such rarely seen footage. They also had the joy of carrying equipment to the top of Mt Sinai. In one of the clips an out-of-breath Tjeransen jokes that he could understand why Moses stayed there 40 days and 40 nights after the effort of making the climb.

“My delight,” states Hulbert, “is that HC-Norway and TED Communication working together means that we were able to produce the series in two languages at reduced cost and easily make it available to other language groups for their translation and use.”

It was an experiment working together bilingually, but as both hosts learnt from each other and blended their skills together, they believe that they have a format that could easily be repeated in the future and used by other teams.

Positive Witness
The documentary and the accompanying short videos, Moments from Sinai are more than just a travelogue or historical journey. Watching a spectacular sunset from the mountain top, Hulbert and Tjeransen found themselves sharing the story of Moses and God’s faithfulness to a young Australian couple who had climbed the mountain but knew absolutely nothing about the Bible. The lively conversation during the descent led the couple to want to explore the story further. That is the purpose of the series. Exploration and discovery leading to faith development, helping people to develop a great trust in Scripture and, more importantly, the God that Scripture reveals.

Thank you
Moments from Sinai will be followed later in the year with a second series filmed in Jordan. For both series our thanks go to the General Conference Communication department whose organization of a GAiN conference in Jordan two years ago made the filming possible. Massive thanks go to the Egyptian and Jordanian authorities for their permissions and to the Egyptian Bible Society for their assistance.

‘Codex Sinaiticus: A journey in Biblical discovery’ released the first week in September on the TED YouTube channel, and a variety of other platforms with the Moments from Sinai then being released on a weekly basis until the end of October. The Norwegian version of the documentary is already available on Hope Channel Norway.

This article was written by Victor Hulbert & Tor Tjeransen and originally appeared on the TEDnews network® website.