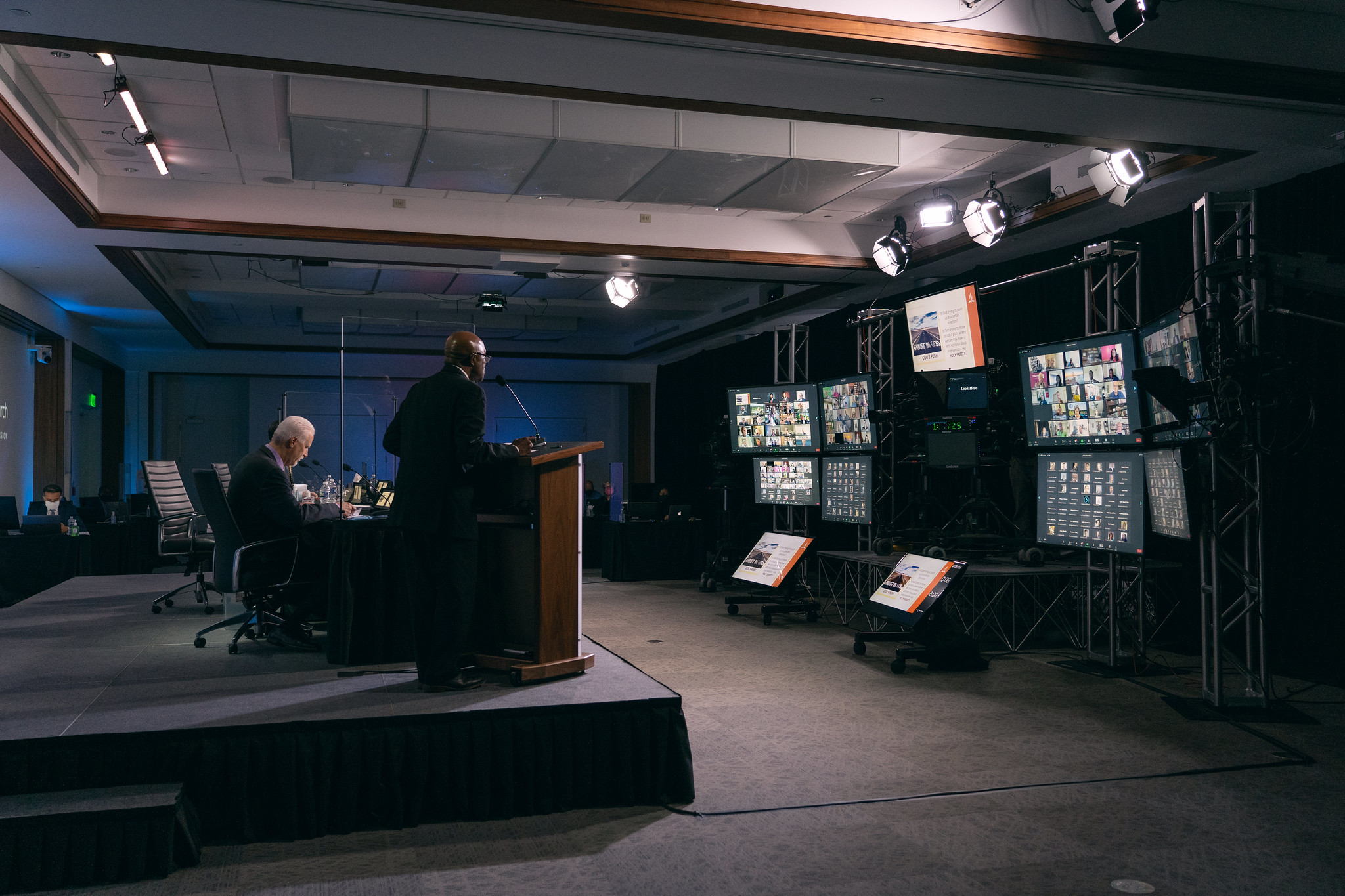 The North American Division wrapped up its year-end meetings this week. Like the annual council meetings held by the General Conference a few weeks prior, the year-end meetings allow the division to present a summary of the past year to its executive committee and lay out plans for the coming year.

Some key moments were learning that tithe numbers are up, the church member growth rate has continued to decline over the past four years, and the Adventist Church ranks lower than many religions and denominations in public favorability.

On Thursday afternoon, the meetings began by dealing with the necessary technical items to hold a virtual session. Like last year, only a few division leaders were present at the NAD headquarters in Columbia, Maryland, with most executive committee members joining over Zoom. Todd McFarland, General Conference associate general counsel, was appointed parliamentarian by common consent. Kyoshin Ahn, NAD secretary, explained how committee members would vote on items using Zoom’s built-in polling. Members were assured multiple times that the polling was both completely secure and anonymous.

Although the executive committee has nearly 300 members, only around half were logged on and present when the meeting began—a pattern also seen at the General Conference meetings.

The focal point of Thursday’s business meeting was the President’s Report. Chosen for the position in 2020, G. Alexander Bryant’s entire presidency has been during the COVID-19 pandemic. And in many ways, the problems of 2021 look similar to those of 2020.

Bryant’s agenda is summarized by the NAD’s three areas of strategic emphasis, voted in February: the alliterative media, multiply, and mentorship. A summary of the day by the NAD’s Kimberly Luste Maran records Bryant’s thoughts on media:

Bryant then broadened the net, saying that many have Facebook and other social media accounts, but that “we spend a lot of time sending pictures of what we ate yesterday. What if we could leverage that—all of those social media posts—into making an impact together for Christ? We would like to train and equip 10,000 digital missionaries to be part of this … to help maximize the strength of the network that we have.”

Multiply touches on a theme that Bryant also expressed at last year’s event.

He stated that the division has 1.2 million members on the books, while between 50 and 65 percent are actively attending and participating. “That's around 500,000 to 750,000 people, depending on what number is used,” he said, as he began to reiterate the notion of exponential growth—a goal Bryant first shared as president in 2020.

Exponential growth sounds wonderful, of course, but time will tell whether it’s a realistic goal.

While trying to increase growth might feel comfortable within Adventism’s well-honed evangelistic mindset, mentorship has perhaps not been such a strong suit. It will, however, be imperative in the coming years—especially if the desired growth numbers can’t be reached.

Mentorship was the final focus of Bryant’s presentation. He shared details about the church’s aging leadership. Of the administrators who are eligible for retirement now—presidents, secretaries, and treasurers—40 percent currently serving are eligible for retirement, he shared. When one looks at the next five years, those figures shift dramatically with 61 percent becoming eligible to retire; specifically, 78 percent of presidents will become retirement eligible. 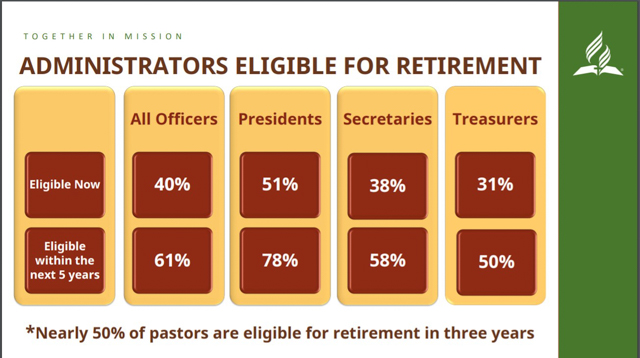 The aging of the pastoral workforce is also dramatic, with 50% of pastors at or near retirement age.

Bryant spoke for an hour, often with a preacher’s energy and delivery. So far, his term has been defined by the church trying to survive the pandemic. The next year should be pivotal in seeing where his agenda might lead.

Membership growth in 2020 saw a dramatic decline. Kyoshin Ahn, executive secretary for the division, shared multiple membership metrics during his report. The number of new members added per 100 church members fell from 2.73 in 2019 to 1.44 in 2020. Slowing growth has been a trend over the past decade—the number of new members added per 100 was 3.63 a decade ago. A note for optimism is that the NAD lost only about half the number of members as the year prior, 5,896 versus 11,572. 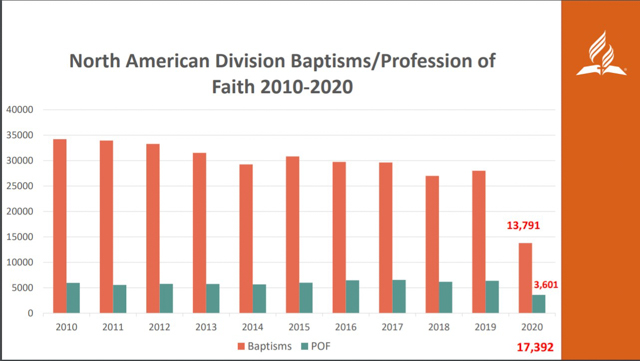 Ahn also shared that only 20% of baptized church members are under 30 years of age. The median age of NAD church members is also a decade older than US citizens, 48 years compared to 38.4.

Brian Ford, director of the eAdventist Membership Services, presented how that tool gives churches a better way to keep track of information and connect with members. Data from the service also gives 2021 membership numbers, which show that growth has picked back up compared to 2020. NAD leadership hopes that 2020’s large decline was due to the pandemic and that numbers will be better going forward.

Another interesting point from the secretary’s report were the preliminary findings from a survey on the Adventist Church’s favorability metrics across the United States. Commissioned from Gallup Research with backing from AdventHealth, the survey asked respondents to rank the Adventist Church compared to other religions and denominations. It averaged 13th out of 17. 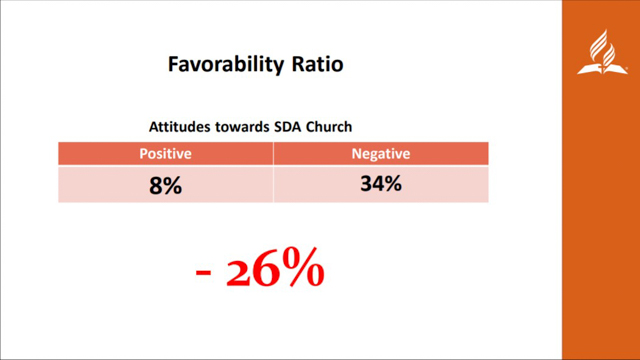 The full survey results will be shared in December.

While much time is justifiably spent talking about mission at church meetings, the church organization is also fundamentally a business, and NAD Treasurer Randy Robinson presented audited financial numbers from 2019-2020, and year-to-date numbers for 2021.

“I look at 2020 in the context of really a miracle. Miraculous 2020,” Robinson said. Early in the pandemic, church treasurers warned of a potential financial calamity.

It didn’t happen. The NAD saw a 2% tithe gain overall in 2020, and 2021 year-to-date shows a 12% gain. Some of this result might be explained by how the negative financial impacts of the pandemic have largely fallen on lower-income earners in the United States, and gains in the stock market and investments likely have benefited large tithe contributors.

Whatever the cause, the end result is a strong financial position for the division. One metric cited by Robinson as a key indicator—days cash on hand (or the number of days an organization can pay its expenses without additional revenue)—has grown steadily over the past four years, rising to 272 days for 2020.

And what should be done with the budget surplus, which is projected to be $15 million for 2021? Robinson emphasized that financial stability is crucial for the organization, and the surplus allows the NAD to exceed the minimum requirements for a financial cushion. However, there should also be opportunities for investing more in mission. He turned to G. Alexander Bryant to elaborate.

Echoing his President’s Report, Bryant brought up the large cities in North America, where the majority of people live but Adventists make up far less than 1% of the population. “This is a conversation that we will continue to have as we move forward, but it is our thought and our plan that in some way [the surplus] will come back to help in the front-line missions in our large cities,” Bryant said.

Later in the meeting, Judy Glass, NAD undertreasurer, presented the budget for 2022. Expenses are expected to be up $10 million for the next year due to several factors. A 7% cost of living increase will go into effect for employees, travel budgets—cut during covid—will be restored to 85%, and project funding will be restored to 100% of pre-COVID levels. However, the strong tithe numbers mean increased expenses shouldn’t be an issue.

“We worked very diligently to be good stewards and plan with our funds, and we think that we’ve got a very conservative budget,” Glass said.

The final day included reports from several ministries, then a move into executive session to vote on edits to the NAD Working Policy. Policy edits are worked on by a policy review committee but can only be finalized by a vote at the year-end meetings.

Proposed changes to the L policy section resulted in a rare close vote.

Elden Ramirez, NAD undersecretary, presented the changes, many of which involve the requirements for pastors. Some terms were updated, such as putting the name of the Seventh-day Adventist Theological Seminary (located at Andrews University) in its current form. Like before, the policy says that pastors should attend the official seminary, but changed the wording from completing “the nine quarter program” to saying “master of divinity” program.

While attending the official seminary has been standard policy, conferences can make exceptions when hiring pastors. Previously, exceptions were called “alternate plans” but the proposed change would say “unusual circumstances.” The old policy said that a union would need to grant an exception, such as a pastor doing an MDiv program at a non-Adventist seminary. The new policy would take the union out of that equation.

Multiple executive committee members had issues with the L policy changes. Several objected to the language saying that pastors shall attend the Seventh-day Adventist Theological Seminary—though G. Alexander Bryant pointed out that requirement had already existed.

Velino Salazar, president of the Southern California Conference, spoke to point out that La Sierra University has an MDiv program, and wondered if it is out of standard compliance to hire pastors with that degree. “Here in the Pacific Union, we don’t want to continue adding things to be out of compliance,” he said with some intended irony.

Sensing significant opposition to the policy changes, Bryant called to separate the L policy from some other sections for the vote—that way, if people objected they wouldn’t also take down the other parts. Bryant said he didn’t want to try and edit policy on the floor, and if committee members had issues with the wording they should vote the changes down.

The vote was called and the changes passed with a 54% majority. Afterward, some committee members expressed that they had been confused about what exactly was being voted on.

Undersecretary Ramirez assured that policy is always a living document and that the policy review committee would consider comments, potentially making further edits that could be voted on next year.

After four days of business sessions, the year-end meetings were closed with remarks from President Bryant.

The North American Division is a large ship that doesn’t change direction quickly. For now, the Adventist church in North America appears to be in a relatively strong position. The solid finances should carry it on for some time, but questions about an aging membership and slow growth will be serious challenges for leadership in the coming years.