A devastating wildfire in Northern California swept through Leoni Meadows, a summer camp owned and operated by the Northern California Conference of Seventh-day Adventists. The fire damaged or destroyed some buildings, but many of the key structures survived, initial reports from the scene indicate.

On Saturday evening, August 14, the Caldor Fire ignited approximately four miles south of Grizzly Flats, a small community in the mountains east of Sacramento, California. Less than 2.5 miles away from the initial point of origin given by the Forest Service sits Leoni Meadows, nestled on 1,000 acres of land surrounded by the El Dorado National Forest.

On August 15, officials ordered evacuations for a 1.5 mile radius surrounding the fire, and warned that Leoni Meadows should be “on alert and prepared to evacuate.” The next day, an inversion layer lifted that had helped reduce the fire intensity, causing it to make “aggressive runs,” according to the Forest Service. Leoni Meadows was ordered to evacuate. Hot, dry conditions that have caused perilous and tragic conditions throughout California this summer fanned what officials would term “extreme fire behavior” throughout the night of August 16 and into the early morning of August 17.

Craig Heinrich, the camp director for Leoni Meadows, posted on Facebook the night of August 16 that he had evacuated, but that he had left a pre-arranged note for the sheriff with the names of four staff members who were staying behind.

The fire would come directly through the camp. It remains unclear how long staff were able to stay on the property, or whether fire personnel were able to remain on the scene continuously; it appears at some point the remaining staff were forced to flee.

On August 17, the question remained of what was left of the property.

That evening around 8:00 PM, Craig Philpott, an independent photojournalist who specializes in wildfire reporting, arrived on the scene.

“The fire damage from the top of the hill of Grizzly Flats continues for several miles of road without interruption, down through the community and then down the last curvy bit of road to Leoni Meadows Camp,” he said in a phone interview.

After passing through almost complete destruction, Philpott arrived to the camp entrance to find the welcome sign intact. “[There were] burning stumps here and there, but not nearly the damage that I had just driven through to get there,” he said. The historic Leoni House Museum, the restored residence of the property’s original homesteaders from 1887, was still standing. So was the main lodge and the Mountain View Inn, which contains dormitories and hotel-style rooms. 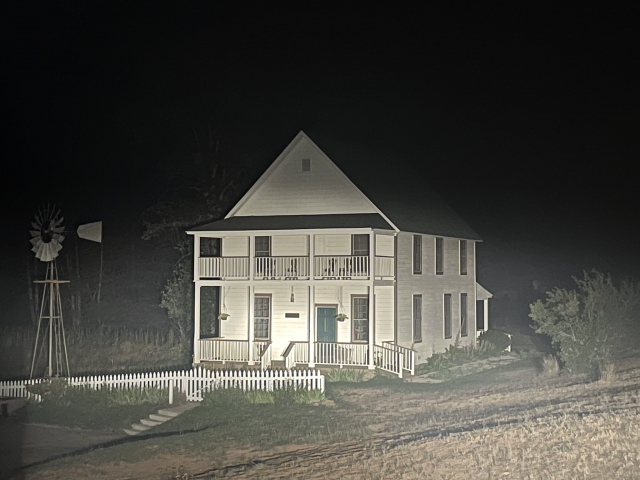 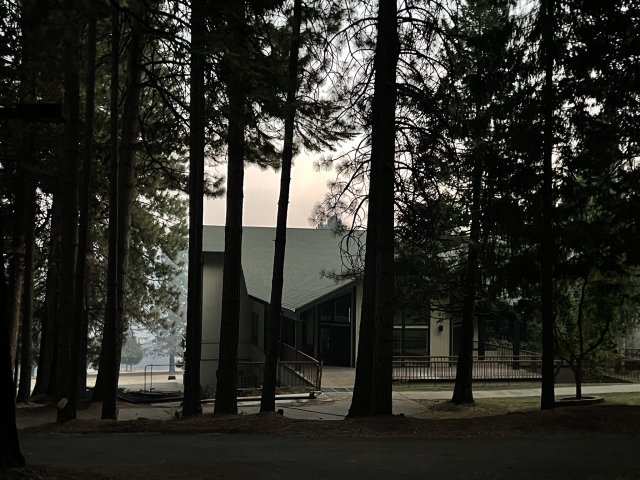 “The core properties of the conference/retreat center are there and intact,” Philpott said, though some, such as the Nature Center, were completely destroyed. Some of the smaller residence cabins survived; some were burned.

Later in the evening of the 17th, Craig Heinrich posted an initial accounting of the buildings to social media, saying that two of the staff members had also been able to return and survey the damage.

The Leoni House is standing.

The Leoni Lodge is standing.

The Meadow View Inn is standing.

The Tri-plex is standing.

The Woodshop is standing.

The Go-Cart Shed is standing.

Terry's and Charlie's House is damaged but standing.

The shop is standing with minimal damage.

The Director's House is standing.

Buildings that did not fare as well:

Although significant rebuilding and cleanup will inevitably be necessary, Philpott, who has been on the scene of many wildfires, did find it remarkable how much survived.

“The ground around virtually every building of Leoni Meadows is blacked up to the foundations of most of the buildings,” he said. “The bulldozer work throughout the property . . . to save the place is extensive and will likely need some restoration work. But the amount of fire that spread through the buildings under the forest canopy, and considering how few buildings were destroyed, is stunning.” The remains of one unidentified building on the Leoni Meadows campus. Photo: Craig Philpott 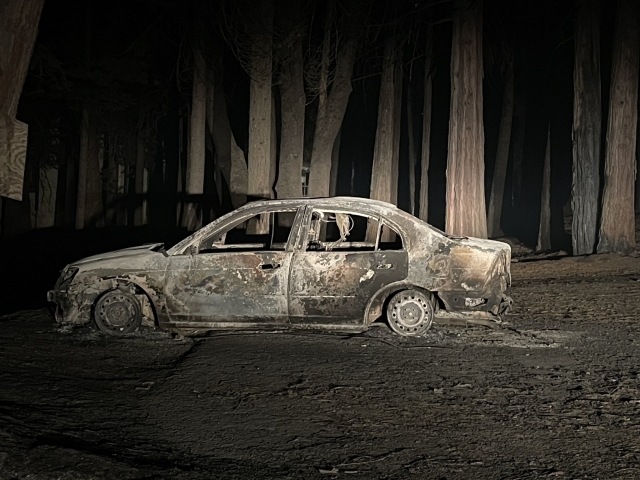 There was significant damage to the motor pool. Photos: Craig Philpott

Philpott has personal connections to Leoni Meadows and has been familiar with the site for some time.

“I think Leoni Meadows has done a very good job over the years thinning their forest and preparing for such a time as this,” he said. “The design of Leoni Meadows, with the meadow out in front of the primary lodges with a massive open space . . . protecting the property in the direction that is most at risk . . . All of those things worked—all of the forest re-thinning, all of the things that have been done over the years.”

Amid the celebration that much of the property survived, however, remains the shadow of the devastation to the surrounding community. As of the morning of August 18, the fire is sized at 53,000 acres with 0% containment. 16,000 area residents are under evacuation orders, and the total number of homes and structures destroyed remains unknown.

The damage to Grizzly Flats appears devastating, and two civilians were hospitalized with significant injuries. Reporters for the Sacramento Bee observed that “many homes, a post office, an elementary school, and a church all burned to the ground.”

“The tragedy in Grizzly Flats is significant, with a significant portion of the community damaged,” Philpott said.

For both Leoni Meadows and the greater community, the damage assessment and rebuilding will continue.

Update: More photos of Leoni Meadows posted by the Northern California Conference of Seventh-day Adventists to Instagram on August 18.

More of Craig Philpott's work can be seen at his website.

Alex Aamodt is the interim managing editor of SpectrumMagazine.org and the Roy Branson Investigative Reporter for Spectrum.

Title Photo: The plume from the Caldor Fire on August 17, by Craig Philpott