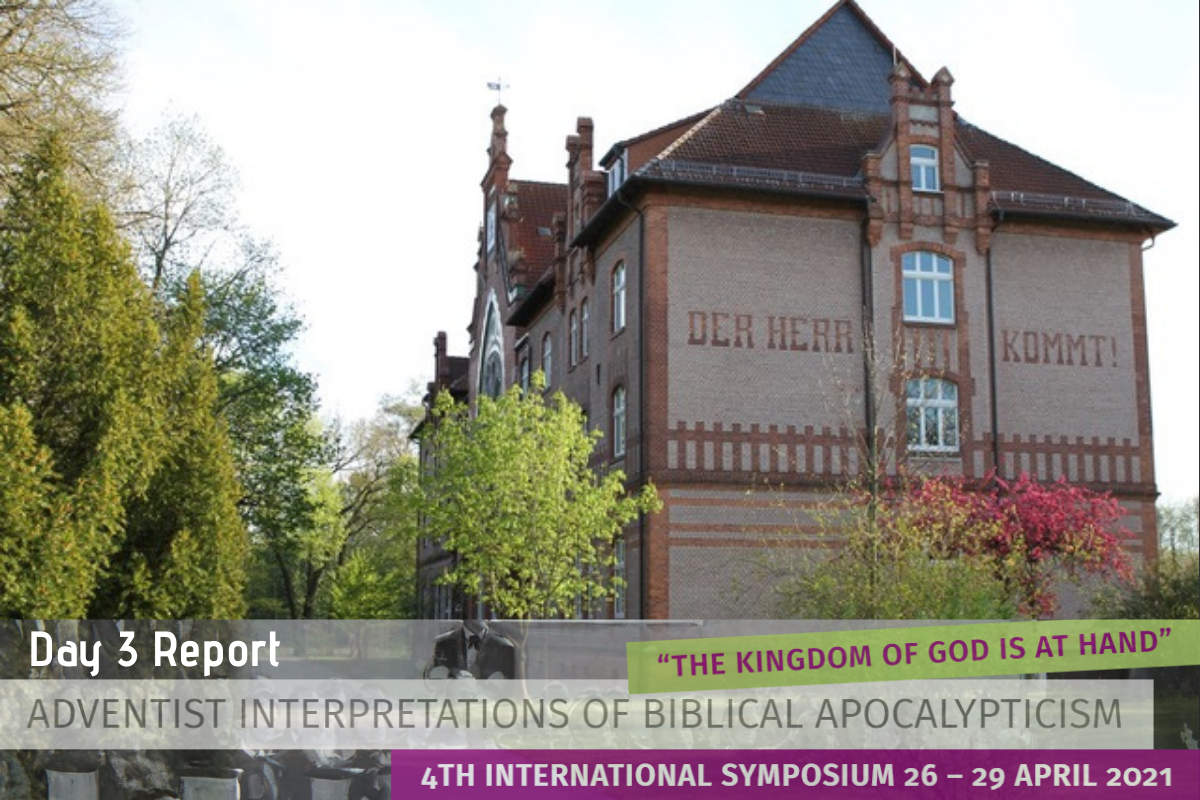 Living and believing at the end of time.

Dr. Kendra Haloviak Valentine of La Sierra University once again started the day off with a short spiritual message. On this third day of the symposium her remarks focused on “Apocalypse and Ecology,” and specifically on the way “the empire” has treated God’s creation. She pointed to the way the Roman Empire already “devastated the earth,” as “empire” has done ever since. Christians must resist the empire’s system of environmental plunder!

The common thread that ran through the six lectures on day three of the symposium was how God’s people must live at the end of time, as they expectantly wait for the return of their Lord. The first speaker, Clansi Rogers, connected with the audience on Zoom and YouTube from her home in Australia. She is currently working on her PhD. A little googling reveals that she often preaches on apocalyptic themes. This morning she spoke about a topic that many Adventist believers can easily relate to. Thousands of church members have read the books she discussed in her lecture, which she had entitled: “Fear versus Hope: Fictional Adaptations of Adventist Eschatology.” She examined three books, published by the denomination in the 1960s and 1980s, in which the eschatological expectations are presented in the form of fiction: Merikay McLeod’s Now (1964); June Strong’s Project Sunlight (1980); and Too Late to Hide by L. Winsome Speck (1983). All three narratives take their cues from Ellen G. White’s Great Controversy and mention a final crisis which is “centered on death-penalties for Sabbath keeping,” and all three “pulsate with the language of fear.” This has far-reaching consequences, as “the readers are expected to soon live out what they are reading.” And thus, they will “look forward to the eschaton with fear, rather than hopefully awaiting the return of Jesus.”

Denis Kaiser was the second speaker of the day. Kaiser teaches at Andrews University and is a specialist in Adventist history. Recently he succeeded George R. Knight as the general editor of the series of Adventist biographies, now published by the Pacific Press. In his paper entitled “The Power of Story,” Kaiser dealt with “Ellen G. White’s and M. L. Andreasen’s Conflicting Great Controversy Narratives.” He showed how these two narratives contain many similarities, but also differ significantly. Unfortunately, many read and interpret the scattered statements by Ellen White, about aspects of the last generation scenario, through the lens of Andreasen’s narrative. They differ with regard to their perception of sin and perfection, and their view of the full efficacy of Christ’s death on the cross for our salvation. They also do not agree on the way in which God is vindicated in the end-time climax of history. Whereas Andreasen insisted that Christ took post-Fall human nature, and being perfect in that state, He could become a role model that we can and must perfectly emulate. By contrast in many of her statements Ellen White underlined the uniqueness of Christ’s nature. These are some of the main areas that are important to adherents of the so-called “last generation theology.”

The name of Milan Lauritz Andreasen also figured prominently in the next presentation. Here I (Reinder Bruinsma) exchanged my role as the Spectrum reporter for being one of the presenters. Fortunately, it was my turn to speak at a “decent” time, namely at 5:00 p.m. Dutch time on the clock in my study. Like most of the other presenters I faced the challenge to limit my talk to about 25 minutes, which meant reducing my original manuscript from over twenty double-spaced pages to just eleven pages. I had submitted a topic that I feel is of great concern to the church: “The Scope of Last Generation Theology — Theologically and Historically.” My treatment of the theological aspect overlapped somewhat with Kaiser’s paper. In my judgment, LGT (as Last Generation Theology is usually abbreviated) is “built on a rather biblicist (“plain reading”) approach to the Scriptures and an eclectic use of Bible texts, and (even more so) on a very selective use of quotations from the writings of Ellen G. White.”

As far as the historical aspect was concerned, I went beyond Andreasen to others before him, who had espoused several important elements of LGT, and also traced the history of LGT since Andreasen, concluding with a short overview of the influence of LGT in current Adventism.

Following the 75-minute break for breakfast, lunch, or supper (for me and others on Central European time), we were privileged to listen to the recently retired Dr. Michael Pearson, who spent his entire life as a valued ethicist at Newbold College of Higher Education, but whose influence has extended far beyond the UK because of his frequent lecturing elsewhere. His paper about “The Ethics of the End—the End of Ethics?” succeeded in fitting a host of material in three sections, which, respectively dealt with a) ten moments from the ethics of domestic life among early Adventists, in particular in the family of E. G. White, “while the hope of an imminent Advent was still burning bright,” b) some observations on the relationship of ethics and apocalyptic, and c) some related ethical issues that deserve further exploration.

Ethical decisions in the face of the fast approaching end, e.g., in the realm of sexuality, varied considerably and were often primarily pragmatic. Since its beginning, the Adventist Church has struggled with how to regulate the domestic life of its members. This did not result in “the end of ethics but [rather in] the multiplication of ethical responsibilities.”

Two of the subjects that stood out in the final section of Pearson’s lecture are, firstly, the Adventist ethical response toward environment and climate change, and, secondly, the lack of Adventist concern for matters of justice. As I listened to my friend Mike, I secretly hoped that he would consider developing this fascinating paper into a book-length treatment for a broad public!

The next paper, by Dr. Stefan Höschele, was closely related to that of Dr. Pearson. After having taught six years at what is now called the Adventist University of Arusha in Tanzania, Professor Höschele moved to Friedensau University in 2013, where he currently serves as Professor of Systematic Theology and Adventist Studies. He earned his PhD in 2005 at the University of Malawi, and recently achieved his “habilitation” (a kind of second doctorate, which qualifies for a professorship at a German university) at the Protestant Theological Faculty of the Charles University in Prague.

In his lecture about “Apocalyptic Eschatology and Adventist Ethics,” Höschele explored the question of how the role of moral thinking in apocalyptic literature impacts Adventism, and opined that the most important contribution of Adventist theology is “great controversy thinking, which has the potential to inform moral reflection in a unique manner.” After a brief summary of different views about the relationship of morality and apocalyptic consciousness among Christian opinion leaders of the past, Höschele zoomed in on Adventism and wondered how important the ethical dimension of apocalypticism was (and is) for Adventists. In early Adventism, the ethical aspect was all-important for a number of different reasons, among them the strong emphasis on obedience to God’s moral law. By contrast, the items regarding eschatology in the 28 Fundamental Beliefs of the Seventh-day Adventist Church hardly mention the ethical implications of our end-time beliefs, and although Adventist official statements and publications underline the need for seriousness and loyalty to God, there is but little attempt to support this with a profound ethical theory. However, in the Adventist theological tradition a definite bond between apocalyptics and ethics is found in the teachings about the kingdom of God and the overarching great controversy worldview.

The final lecture of day three provided a unique perspective. It owed this uniqueness to the geographical, cultural, and economic context of the speaker, Theodore U. Dickson, a senior lecturer in Old Testament and Family Studies at Babcock University in Nigeria — presently one of the largest universities in the Adventist educational system. The full title of his contribution to the symposium reflects the trajectory of his lecture: “How long, O Lord? Eschatological Hope amidst Suffering in Job 19:25-27: Echoes of Eschatology from Below among Seventh-day Adventists in Nigeria.” Unfortunately, the internet connection with Nigeria was very unstable, but as Dr. Dickson had sent his manuscript ahead of the symposium, the text could be read by Dr. Rolf Pöhler when the connection was lost.

The famous passage in Job 19 about Job’s conviction that his Redeemer lives and that eventually he will see God in his flesh, has been interpreted in different ways. Some scholars have argued that this refers to Job’s belief in a bodily resurrection. Others have postulated that the passage is about a postmortem encounter with God in a disembodied state. Others again have suggested that the words must be viewed as describing an existential encounter, or simply as a heartfelt wish of the suffering Job. Dickson opted for the first interpretation: Job is convinced God will be his Go’el, his Redeemer, even if he dies. He provided a linguistic analysis of the passage in Job 19, which supports this eschatological view.

In his lecture, Dickson called this progression, from a life of misery to the emergence of hope, an “eschatology ‘from below.’” He explained why this perspective is especially meaningful for Africans, and, in particular, for Seventh-day Adventists in Nigeria. He cited four very specific, and moving, cases of intense suffering by Nigerian church members, which are representative of what many experience, and emphasized how the words of Job 19 have provided an “eschatology from below” for those who, like Job, have been confronted with great suffering.

On this meaningful note, that not only affects people in Africa but touches all of us, the formal part of day three ended. Today I also continued for about an hour in one of the “break-out rooms,” where not only the lecturers but also the numerous auditors have the opportunity to interact with a speaker of the day of their choice. It made my day a little longer, but by 10:30 p.m. (my time) I could begin putting the finishing touches on this report, and soon thereafter start with a physical rest, in preparation for the final day of the symposium.

Reinder Bruinsma (PhD, University of London, UK). Retired since 2008. Bruinsma served the Adventist Church in various assignments, in pastoral, educational and publishing work, and subsequently as a church administrator. His last assignments were executive secretary of the Trans-European Division, followed by a term as president of the Netherlands Union. After he retired, he served for 18 months as the interim president of the Belgian-Luxembourg Conference.

Since then, Bruinsma continues to be active as a speaker and writer. He has written numerous articles, translated a number of major scholarly theological works, and authored ca. 30 books, either in English or Dutch. A number of these are translated in several languages. Among his most recent books are In All Humility: Saying ‘No’ to Last Generation Theology (2018), and I Have a Future: Christ’s Resurrection and Mine (2019).