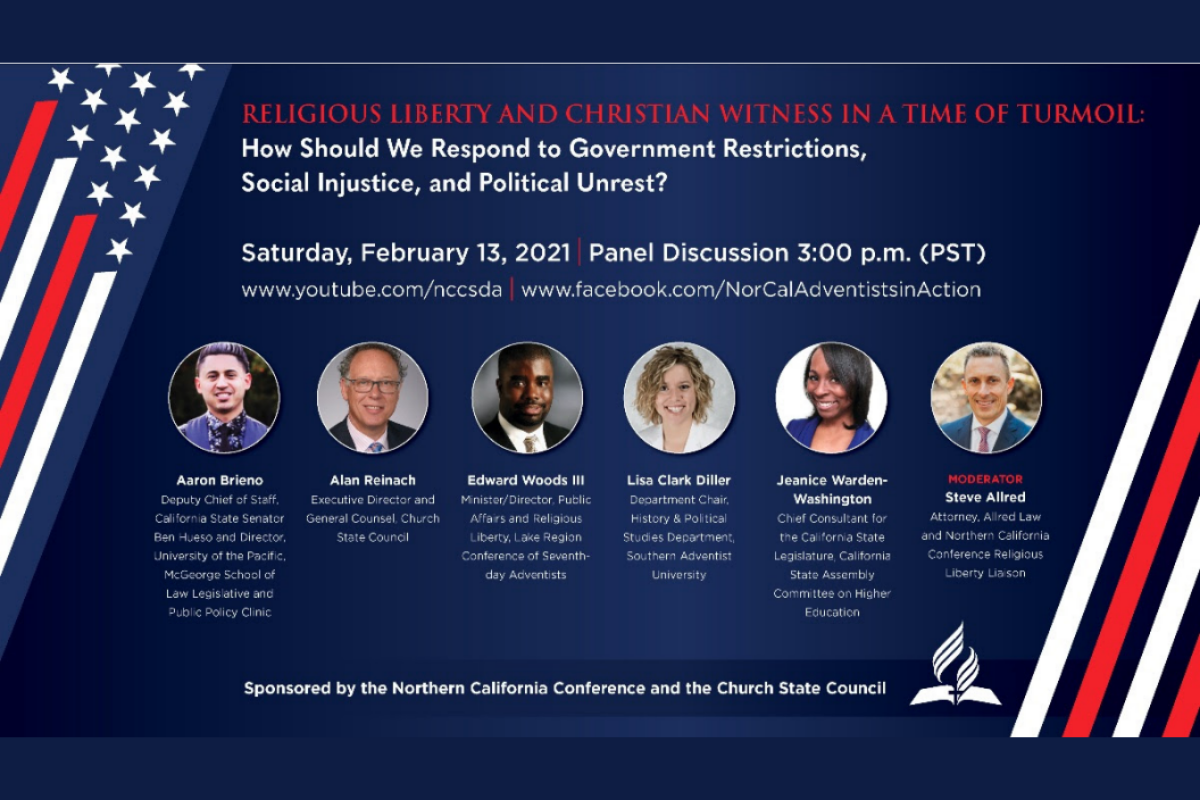 A panel of Seventh-day Adventist ­attorneys, church and government officials, and a historian on Saturday, February 13, 2021, discussed how Christians should act during times of crisis, such as the current pandemic, when fears are raised of possible incursions on religious freedoms. The webinar, titled “Religious Liberty and Christian Witness in a Time of Turmoil,” was livestreamed by its sponsor, the Northern California Conference.

“While the world reels from the latest breaking news, how should we as followers of Jesus respond to everything that’s going on?” said moderator Steve Allred, attorney and religious liberty liaison for the Northern California Conference, in opening remarks.

A panel of five shared their expertise on questions of religious liberty brought about by almost a year of various public health mandates in different parts of the country, often including suspending religious services or limiting attendance.

By conversation’s end, the panelists together roused an ardent call inviting church members to prioritize community service and cooperative engagement in public affairs over physically sitting in the pews during a public health crisis. The panel comprised:

• Aaron Brieno, deputy chief of staff for California State Senator Ben Hueso and director of the University of the Pacific McGeorge School of Law’s Legislative and Public Policy Clinic

Moderator Allred directed his first question to Edward Woods III, asking “How do we respond to these restrictions in a way that engages our communities with compassion and shares Jesus with them?”

Woods fronted his remarks proclaiming that the church has never truly closed.

“The church facility was closed, but you and I are the church. We weren’t closed,” Woods said. He shared for consideration a strategy the Lake Region Conference has employed during the pandemic — COPE, standing for Census, Outreach, Pastors, and Engagement — to maximize this downtime and double down on meeting the needs of church members, first responders, pastors, the vulnerable, and the community. Restrictions on physical gatherings have allowed the conference’s churches to exceed usual amounts of community outreach, he said.

“This was a public health crisis. This is not a religious liberty issue,” Woods said.

Harkening back to the 1918 influenza pandemic, Lisa Clark Diller shared how the Seventh-day Adventist Church reacted to public health measures at that time.

Adventists have a long history of prioritizing the public’s health as “part of our mission, part of our evangelism, the right arm of the Gospel,” Diller said. During the 1918 pandemic, church members made themselves and their resources available to government agencies, including the military, to assist in stemming the rampant influenza spread, she said.

“The illness attacked our own institutions, and so we also had to do the social distancing. We shut down our houses of worship when asked to do so… to help with the public health crisis,” she said.

Not that Seventh-day Adventists in that era had no fears regarding their free exercise of religion; the concerns just weren’t pandemic-related, Diller explained. Instead, fear surrounded military service requirements during World War I, when, she said, the FBI surveilled the Adventist Church due to members’ passivism stance as well as the denomination’s high number of immigrants — many from Germany.

Returning to present, Allred asked the panelists if current restrictions on religious gatherings amount to persecution: are churches being targeted because they are churches?

Alan Reinach said, “From the beginning of this pandemic, my own position was that we should be working with government to solve the public health problem, not fighting with local government where we think that the restrictions are unduly harsh at times.”

His worries lie at the other end of the spectrum. In its ruling on lawsuits challenging government restrictions on religious gatherings, “… the court has drawn the rules of comparison so broadly that some legal scholars are calling this approach granting religion ‘most favored nation status,’” Reinach said. “In other words, if any secular interests are treated better than religion, it doesn’t matter whether it’s a fair comparison for purposes of public health.”

Allred steered the conversation to civil disobedience, stating it has its time and place. He referenced a passage by Ellen G. White from Testimonies for the Church, Volume 6: “There will come a time when, because of our advocacy of Bible truth, we shall be treated as traitors; but let not this time be hastened by unadvised movements that stir up animosity and strife.”

So how do we know when to act? Allred noted that some people really believe in a behind-the-scenes conspiracy — motivated by hatred of Christians — to discriminate against churches. He asked Aaron Brieno and Jeanice Warden-Washington, both of whom work in government positions interacting with California’s legislators, whether they have witnessed such discrimination.

Warden-Washington shared, “I know unequivocally, working day in day out with government officials on a consistent basis, that at their core, they have a desire to impact change, and most are not corrupt. We also have to realize, and this has come up again, COVID-19 is a global public health crisis, and government officials have a responsibility to make sure that their constituents are kept safe.”

Through virtual means, Warden-Washington said, corporate worship is still possible. She posed fodder for self-reflection: Prior to COVID-19, how did we behave at church? Were we cliquey? Were we pew warmers?

Brieno said he echoed many of Warden-Washington’s remarks. “And I’ll go a step further,” he noted, “to say that the vast majority of elected officials, and at least I’ll speak for the California Legislature, are people just like you and I, representing their communities — teachers, doctors, small business owners, things of that nature — individuals who had a concern for their community and wanted to make a significant impact.”

The group members became their most animated and verbose as the conversation later moved toward how Christians should respond to civil authorities, what to do when earthly law conflicts with God’s law, and where to draw that line. Scripture was referenced several times, and it was a short bridge to panelists noting copious passages and stories in the Bible mandating believers to act as agents of justice. An adjacent and often thorny term of today, social justice, was also discussed, with aim placed toward transcending divisive ideological connotations to instead work together on areas of agreement in service of the community.

Among many passionate comments from the group was an appeal from Edward Woods that it is time for the Adventist Church to deal with systems, not just symptoms, of the world’s ills and wounds. In order to be serious about evangelism, proselytization, and reaching young people, he said we would do well to follow a statement he quoted from Signs of the Times in 1901: “The life of the church depends on the interest its members manifest in those outside of the church.”

That might look like adopting a systemic approach to reduce the causes of hunger, rather than counting how much food we give away, Woods posited as one example.

Doing so would be truly evangelistic, he noted, tying it all back to freely exercised religion: “Public affairs is the avenue to bring people to our church so that we can support their religious freedom,” Woods said.

The full discussion, spanning an hour and 45 minutes, was recorded and can be viewed on YouTube, or Facebook, or below:

Heather Reifsnyder is a freelance writer and editor with a love of poetry, forests, and the Oxford English Dictionary. She lives in inland Southern California.