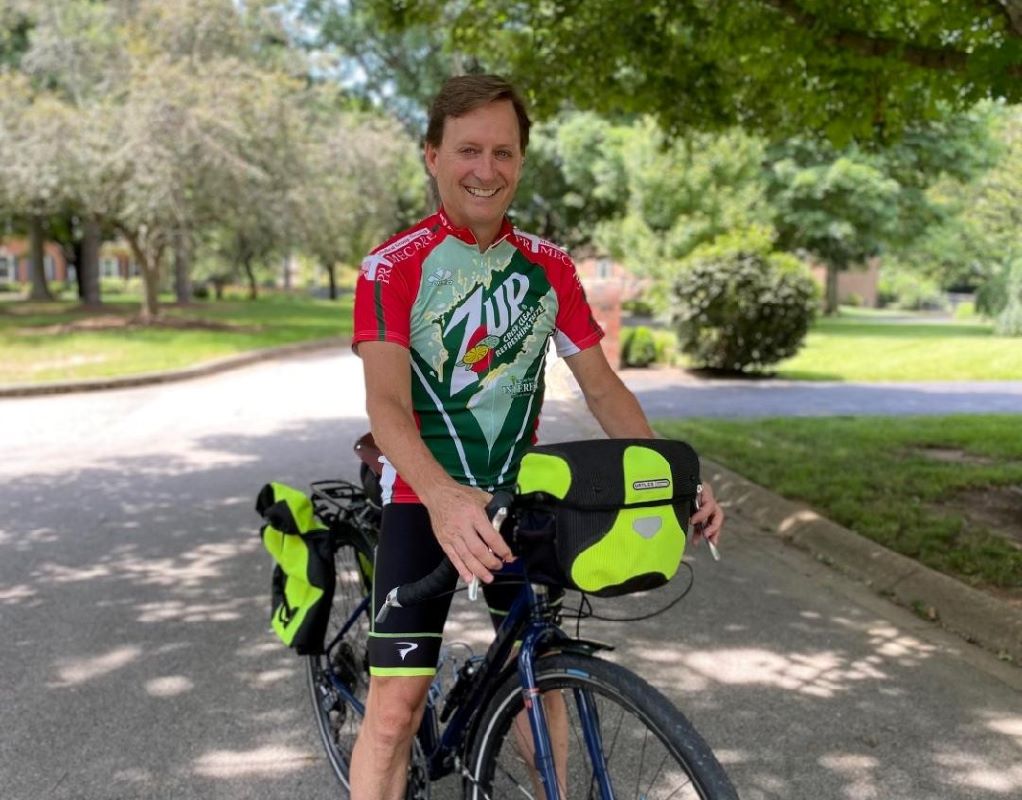 Back in 2001, Dr. Randy Schell’s coast-to-coast bike ride across the northern reaches of the country was intended as a journey of contemplation. It ended up as an opportunity to help those with limited income who suffer life’s darkest moment, the loss of a child.

During the 48-day, 4,100-mile ride 20 years ago, Schell at age 40 raised more than $25,000 for The Unforgettables Foundation, a nonprofit 501I3 based in Redlands, Calif. Through its chapters in Nevada, Ohio, Tennessee and Canada, the organization helps low-income and cash-strapped families whose children have died pay for proper burials. On Aug. 20, Schell, now 60, set out on a 2,400-mile 20-year anniversary ride, a second fundraising trek christened ‘Dr. Randy’s Unforgettable Ride 2.0,’ to once again bring in donations for The Unforgettables, established in 1999-2000 by Schell’s college friend and former chaplain Tim Evans.

The Unforgettables has funded more than 7,500 cases since it began actively aiding families and parents in 2001. It is reliant on grants from private and corporate foundations such as the Versacare Foundation, San Manuel Band of Mission Indians, Davita Dialysis, Wescom Credit Union and the H.N. Frances C. Berger Foundation. In 2018 the California State Senate designated the nonprofit its Charity of the Year and in 2019 the San Bernardino County Medical Society recognized Evans as its Outstanding Citizen of the Year.

Schell is a cardiac anesthesiologist and serves as a professor and interim chair of the Department of Anesthesiology at the University of Kentucky College of Medicine. Beginning July 1 he entered phased retirement allowing him more time to pursue his cycling activities and prepare for the late-summer ride.

An avid cyclist, he was influenced to participate in the first ride in 2001 in part due to the empathy he feels with those who suffer shattering losses—his first wife and their baby died in 1992. “It was a devastating time in my life where I just basically rode my bike, went to church and read and tried to get my life back in line,” he said. “And I realized [there’s] a lot of good that I could do to share with others and attempt to raise money for The Unforgettables,” he said.

Schell’s second fund-raising expedition is a north-to-south adventure from Washington State near the Canadian border to a California town straddling the Mexico border. The route parallels and crisscrosses the famed Pacific Crest Trail, “which means that you get to see some of the most wonderful places like, Mt. Rainier, and Crater Lake, Yosemite National Park, Sequoia National Park, Lake Tahoe and Truckee,” he said. The route, which began in Blaine, Wash. Will take him through Washington, Oregon, and California. He will pass through Southern California’s San Bernardino Mountain range, cycling past Big Bear Lake and down into Yucaipa near Highland and Redlands, into the San Gorgonio Pass and up Mt. San Jacinto into Idyllwild and from there through the Anza-Borrego Desert to finally come to a stop at Tecate, Calif. On the border of Mexico.

Schell will cycle to elevations of almost 10,000 feet in some passes. “That’s gonna’ be a challenge to climb with your food, your clothes, your sleeping bag and a heavy bike up through there, but I actually enjoy climbing and seeing what’s around the next bend, and it’s fun for me,” he said.

The journey is expected to take approximately six weeks, concluding on Oct. 2, give or take, just two days prior to Schell’s 61st birthday on Oct. 4. A reception celebrating the bike ride fundraiser will be held in Riverside on Sept. 25.

Cyclists are encouraged to ride along with Schell as he passes through their communities. The trip will involve at least two ‘special guest’ cyclists during the first 1,200 miles or more of his journey, Dr. David Materno, noted cardiologist and adventure cyclist will join Schell—in part to make up for a ride the two had planned in Southeast Asia that was sidelined by the Covid-19 pandemic. In Southern California’s Yucaipa, former La Sierra University student Spencer Sherwin, son of Evans’ and Schell’s long-time friend and pediatric emergency medicine physician Dr. Tom Sherwin, will join Schell for a distance using an adaptive bike. Spencer Sherwin continues to recover from a car accident that occurred in June 2020 during which he suffered a debilitating spinal nerve injury.

During Schell’s first bike ride fundraiser for The Unforgettables in 2001, Schell’s second wife whom he married in 1994 and their seven-month-old son, Connor, now a pre-medical student at Southern Adventist University, rode along with him in a rented RV which served as his nightly shelter. For this summer’s expedition, Schell’s shelter consists of a backpacking tent strapped inside a waterproof bag attached to the back of the seat of his steel, 28-pound Kona Sutra bike along with a sleeping pad and down sleeping bag. In side-panniers he carries a blowup pillow, two changes of lightweight clothes, a full set of rain gear, a tiny backpacking stove, dehydrated food, and in a small front pouch maps, phone and credit cards. Loaded down, he is moving nearly 50 pounds along the roadways and mountain passes.

Schell took up riding during the late 1980s at the end of medical school at Loma Linda University to get back into good physical condition following years focused on academics. His passion for cycling led him to long trips around the United States and through the Alps of France and Italy. While such riding keeps him fit, for weeks-long treks such as the Unforgettables fundraising ride Schell aimed for peak fitness.

This involved workouts with weights, and longer and harder rides, upwards of 35–40 miles a day or more, with rainy days spent on a stationary bike in his house outfitted with a video screen that simulates the mountainous roads and trails of Europe. He expects to average 65–80 miles per day or more on his fundraising ride.

Schell and Evans have known each other since their days studying at Andrews University in Michigan during the early 1980s when they met through mutual friend Tom Sherwin, Schell’s academy and college roommate. Schell, Sherwin and Evans attended Seventh-day Adventist academies in Michigan, respectively Cedar Lake and Adelphian situated a couple of hours apart from each other. After Andrews, all three ended up in Southern California, Schell and Sherwin to attend medical school at Loma Linda University. Evans served as founding chaplain for the Loma Linda University Children’s Hospital prior to establishing The Unforgettables with Sherwin as its first board chair. The notion of a second bike ride benefitting The Unforgettables took shape during conversations roughly three years ago between Schell and Evans when the two joined an Alaska cruise for their academy graduating classes.

“Everything kind of came together from about six or seven months ago when I decided to do a phased retirement starting July 1 of this year,” Schell said in a June interview. “Tim and I started talking and I said I want to do this year a Cascade [Range] ride, because it’s so beautiful. And he said ‘well why don’t you do it for The Unforgettables,’ and I said that sounds great 20 years afterwards, therefore the 2.0.”

The Unforgettables is establishing additional chapters in Colorado, New Mexico, Florida and Maine with sites targeted in Kentucky and Michigan, “in honor of Schell and the three amigos, Evans, Sherwin and Schell,” Evans said. “The ride is to raise money for these and hopefully other locations.”

He added, “Drs. Randy and Tom know first-hand as caring physicians dealing with the operating room suite and the pediatric emergency room areas what it is like to try to support and encourage and comfort a family that has just lost a child. It is the hardest thing I as a chaplain and they as doctors have to do in the scope of clinical care for sure. To be there to be able to help with very real funds for a dignified funeral on their darkest day when a family is grief-stricken and cash-strapped is a sacred privilege and God-given responsibility that the three of us share.”

Schell plans to post photos and updates during his 2,400-mile ride. To follow along, visit https://unforgettables.org and https://www.facebook.com/theunforgettablesfoundation/.

This article was provided by The Unforgettables Foundation.

Photo: Dr. Schell this past June, wearing the riding jersey he wore during the first fundraising cycling trip in 2001, courtesy of The Unforgettables Foundation.