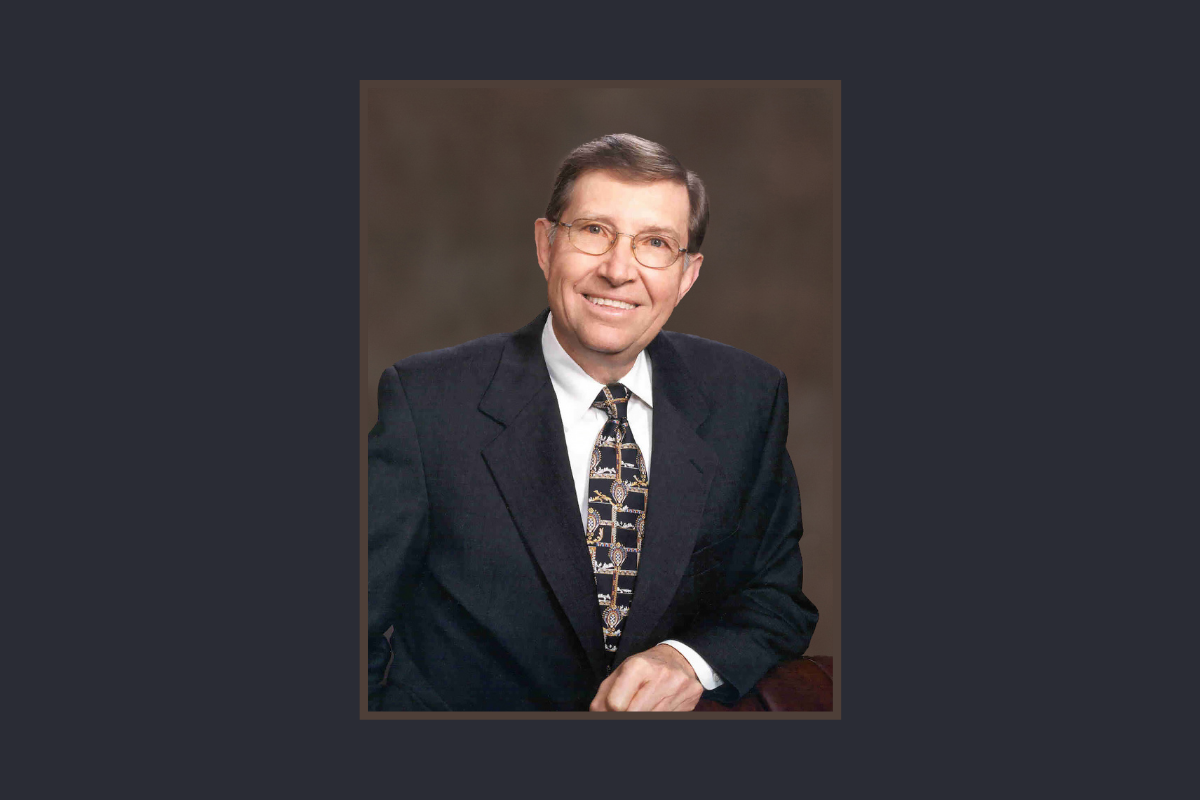 ROSEVILLE – Healthcare lost a larger-than-life figure when Frank F. Dupper passed away December 31, 2020 — 22 years to the day after he retired as president of Adventist Health — culminating a storied, three-decade career with the West Coast health system.

One of the founders of Adventist Health, Dupper left a legacy that inspires the organization today, said Adventist Health CEO Scott Reiner. “While I never had a chance to work directly with Frank, he affected me deeply. Frank had a profound impact on our organization’s culture, and the private conversations we shared were always so encouraging and centered on the focus of our work: our mission.”

Dupper was born January 20, 1933, at a farmhouse in Beebe Draw, Colorado, to a German-speaking immigrant couple, Henry and Caroline Dupper. One of seven siblings, he recalled not having electricity at the farm until he was 10 or 12 and milking cows by hand. He would be served well professionally by that grit and work ethic, as well as by dealing with polio, which he referred to as a “blessing from God.” Succeeding against the odds would be a recurrent theme in Dupper’s life as a leader, where he faced formidable challenges with resourcefulness and faith.

Dupper attended high school at Campion Academy in Loveland, Colorado, and graduated with his bachelor’s degree from Union College in Lincoln, Nebraska, with high honors in 1954. The first decade of his career was spent teaching accounting and working as a treasurer for church schools. While at Fresno Union Academy, he met his future wife, Norma Eder, and the couple married on June 24, 1956.

While working at Newbury Park Academy in Southern California in 1964, Dupper was recruited to be controller at Glendale Sanitarium & Hospital (now Adventist Health Glendale), where he advanced to vice president of finance. In the early 1970s, the Seventh-day Adventist Church’s hospitals were a very loose association. With other like-minded administrators, Dupper helped frame a bold, seemingly impossible vision: Create a healthcare system with economies of scale and centralized services to drive cost savings, operational efficiencies and shared mission. In July 1974, Dupper became the first vice president of what was then known as Adventist Health Services. When reminiscing about those early days, Dupper was quick to invoke the name of his mentor and boss, Erwin Remboldt, whom he affectionately called “Chief.” In 1980, Dupper would succeed Erwin as president of Adventist Health System/West, a forerunner of the $4 billion integrated health system Adventist Health is today.

A tireless and innovative leader, Dupper played a direct role in many early organizational milestones that showcased both his ingenuity and strategic mindset. One of his first accomplishments in 1974 was self-insuring the system for hospital professional liability/general liability. Two years later, he facilitated a systemwide group purchasing program. He also established an internal auditing department enabling legions of young people to achieve their CPAs and become future finance officers. Home health agencies were added, and, thanks to his business acumen, many alliances as well as joint ventures formed. In the mid-1980s, Dupper and his senior team moved the system’s headquarters to Roseville, California. This abbreviated list of notable achievements doesn’t come close to capturing how Dupper’s staff, executive team or industry colleagues best remember him.

Dupper was an embodiment of integrity and servant leadership who also set a high bar. More than one person confessed that no boss ever got as much from them as Dupper did, because nobody wanted to disappoint him! His handwritten notes are treasured still today. His signature line, “Big Thanks, Frank,” was often penned in the first page of a book sent as a gift to his management team and even competitors. Those books were most often spiritual in nature, which reflected Dupper’s Christian faith.

Dupper was a man of prayer who more than once knelt in his corner office imploring God to guide him while leading the organization in chaotic times. No single incident better captures his fervent pleas for divine intervention than in 1989 when a draft of California Senate Bill 855 was shared with Dupper. It established funds for hospitals that provide a high percentage of charity care (free or reduced-cost care) and serve a disproportionately high number of Medi-Cal patients. Dupper would tearfully recount how prayer coupled with a few word changes at the midnight hour miraculously meant that select Adventist Health hospitals would qualify for funds from that bill, enabling them to serve needy communities.

Dupper’s impact on the health system that he loved so much as well as those he encountered day to day is too vast to quantify. His contributions were large and small; spiritual and cultural; technical and philosophical; professional; and — to so many individuals — very personal. When paying tribute to Dupper at his retirement events, speakers applauded him as someone who truly made a difference in the lives he touched. That distinctive characteristic earned him extraordinary admiration and respect from people of all walks of life.

Upon Dupper’s retirement, Adventist Health established the Dupper Internship Program. To date, approximately 200 young professionals have benefited from the opportunity to learn and grow while working within the healthcare system. The program continues Dupper’s long legacy of mentoring and cultivating young leaders for service to others.

While he worked hard, Dupper played hard, too! He was a practical joker who impishly added salt to the water glasses of his table mates at some of the finer restaurants they frequented. Planting fake bugs on salads and dinner plates was another favorite prank, much to the horror and amusement of his victims. He was a kid at heart with an easy laugh who enjoyed a good joke even at his own expense.

While sometimes characterized as a workaholic, Dupper also was a devoted husband to Norma, his wife of 64 years, and father to Debbie (Mark) Ashlock and Brent (Sylvia) Dupper. He was the family pancake-maker and bargain-hunter. Dupper loved gardening in the yard of his Granite Bay home and tending to his fruit trees. He was beloved as “Pops” to four grandchildren and three great grandchildren. His legacy of service continues in that his children, their spouses and even grandchildren have worked or are working in healthcare today.

One of Dupper’s most frequently recited quotes was, “They don’t care how much you know, until they know how much you care.” To his family, throngs of friends, fellow church members and colleagues Dupper remains a hero for whom we cared very much. Big thanks, Frank!

Memorial gifts in Dupper’s honor may be directed to the Frank Dupper Memorial Fund at AdventistHealth.org/giving in the “How to donate” section or mailed to Philanthropy Department, Adventist Health, ONE Adventist Health Way, Roseville, CA 95661. Those with questions are invited to call 916-406-0688 or send an email to giving@ah.org.

Adventist Health is a faith-based, nonprofit integrated health system serving more than 80 communities on the West Coast and Hawaii as well as others across the U.S. through its Blue Zones company, a pioneer in taking a systemic and environmental approach to improving the health of entire cities and communities. Through this work, Adventist Health is leading a 21st century well-being transformation movement. Founded on Seventh-day Adventist heritage and values, Adventist Health provides care in hospitals, clinics, its innovative Adventist Health Hospital@Home program that provides virtual in-patient care at home, home care agencies, hospice agencies and joint-venture retirement centers in both rural and urban communities. Our compassionate and talented team of 37,000 includes associates, medical staff physicians, allied health professionals and volunteers driven in pursuit of one mission: living God's love by inspiring health, wholeness and hope. Together, we are transforming the American healthcare experience with an innovative, yet timeless, whole-person focus on physical, mental, spiritual and social healing to support community well-being.

This life sketch was written by Rita Waterman and provided by Adventist Health for distribution.