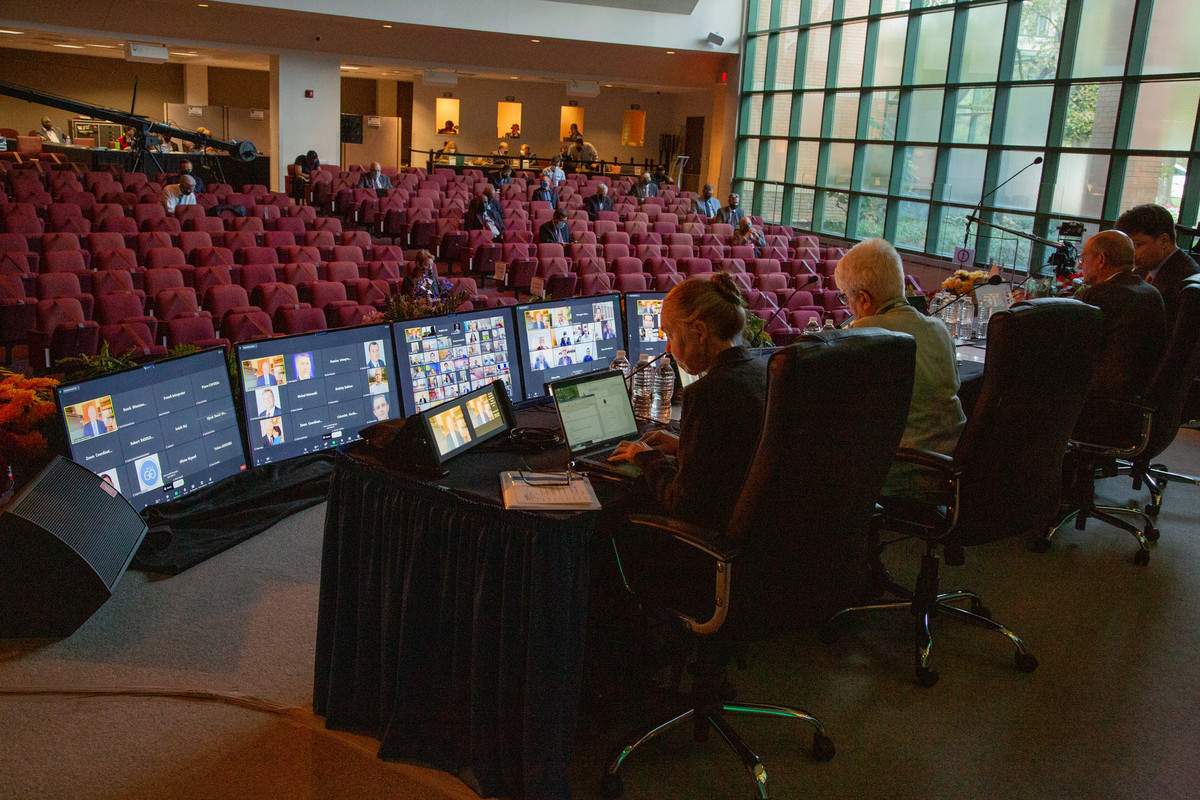 To begin the day on Tuesday, President Ted Wilson shared more thoughts about his Top Ten Theological Challenges that had been presented on Monday, noting that the Adventist Review had promised to carry the presentations given by Mark Finley, Artur Stele, and Mike Ryan. He encouraged leaders to take matters into their own hands, to preach Bible truth, hold Bible conferences. He neglected to mention having a conversation with college and university theologians who might be able to illuminate the issues.

Then the General Conference Executive Committee turned to its policy agenda. Undersecretary Hensley Moorooven assured the members that policy wasn’t boring and could be fun. Policy is vitally important, the other side of the coin that is mission, he said. To introduce each item, he had quiz questions with prizes for those who answered correctly. When Zoom participants were the lucky winners, staff members quickly volunteered to take the prizes to the winners in international locations.

The most debated policy item pertained to college and university boards. Previously that section of the Working Policy was two sentences long: “Subject to applicable civil laws and regulations, members of the governing board of Seventh-day Adventist colleges and universities shall be members of the Seventh-day Adventist Church in regular standing. Others may serve in advisory capacities.”

To replace that, three pages of new language were introduced, covering not only the membership of the boards but also their purpose and duties. The proposed new paragraph on composition and structure of the Board started as before, requiring that members shall be members of the church. It went on to say:

The basic governance structure of the board includes the positions of board chair, board secretary (usually the college/university president) and board members. These should include division, union, local conference, or local mission/field/section leadership from the college/university territory, and other lay professionals who bring needed expertise in areas such as education, finances, innovation, diversity, fundraising, healthcare, etc. Board actions require a majority vote (or super majority for certain types of votes such as changes to bylaws or removal of officers, trustees, or members of the local governing council). The board performs due diligence through its committee structure and by trustees attending and being prepared for meetings. Depending on their expertise, most require trustees to chair or to serve on at least one committee of the board. . .

But this wording was not specific enough for Mike Ryan, assistant to the General Conference president. He and several others came to the microphone during the discussion of the item. Neither was the paragraph on the board’s Duty of Good Faith considered complete. The paragraph reads:

To act honestly and in good faith in the best interests of the institution; to ensure that the institution complies with applicable laws and regulations, its own bylaws, denominational working policy, and accreditation standards; to ensure adherence to the institution’s stated mission, strategic goals and objective; to establish a policy-based governance system and approve policies related to programs and services in alignment with the mission of the Seventh-day Adventist Church; to receive annual reports regarding fulfillment of Accreditation Association of Seventh-day Adventist Schools, Colleges, and Universities (AAA) accreditation recommendations.

Ryan felt that the policy should require specifically that presidents of unions and conferences serve on the boards and hopefully chair them. Others wanted the duty section to include something more than just alignment with the mission of the Seventh-day Adventist Church, the Fundamental Beliefs needed to be mentioned.

Wilson, who was chairing the meeting, wanted to simply take these recommendations under advisement rather than referring the section back to committee. He was intent on getting the vote completed. And it did pass, along with all the other policy items, when the policy agenda was voted as a block.

After the policy agenda was approved, there were constituency meetings and reports. The Executive Committee serves as the constituency for International Religious Liberty Association, Adventist Development and Relief Agency, Adventist World Radio, and Hope Channel. Video reports from these entities were presented before votes of acceptance.

In the Religious Liberty conversation, Director Ganoune Diop also introduced the newest member of their team, attorney Jennifer Woods, who previously served in the Office of General Counsel. She will represent the denomination at American government entities in Washington, D.C.

A slew of evangelistic project reports filled Wednesday, beginning with the Strategic Plan—I Will Go—plus reports from the Three Angels Messages Committee, the Great Controversy Project 2.0, and Digital Evangelism. Each department of the General Conference has been enlisted to prepare materials to share as part of the I Will Go plan. For children, the Three Angels Messages Committee, in conjunction with the Children’s Ministries Department, created animated videos and comic-style storybooks. To facilitate local I Will Go Projects, the Communication Department has digital resources available: social media images for Instagram and Facebook, presentation templates, an explainer video, zoom backgrounds, and a QR code can all be downloaded at iwillgo2020.org.

With a completed agenda, the meeting closed, as usual, with a reading from The Spirit of Prophecy, this time, selections from Welfare Ministry, chapter 3, including this passage on p. 32: “Much more than mere sermonizing is included in preaching the gospel. The ignorant are to be enlightened, the discouraged are to be uplifted the sick are to be healed. The human voice is to act its part in God’s work. Words of tenderness, sympathy, and love are to witness to the truth. Earnest, heartfelt prayers are to bring the angels near.”

Watching the meeting on Zoom, I felt like it was a wonderful technological success. The staff member who cheerily volunteered to deliver Audrey Anderson’s policy quiz prize to her home in England was the only hint that without travel budgets, the GC personnel are restless. No one actually complained about the international travel restrictions, but certainly they were the elephant in the room, the reason why a hybrid meeting was necessary. Yes, the technology brought people from around the world together, but gone were the camaraderie and animated conversations that usually highlight the meeting and build bonds across geographical boundaries. In addition to the desire to go and make disciples, there is a desire to go and see friends—and make new ones.