Annual Council Business Session Day 1 — What Shall Be Done?

Annual Council Business Session Day 1 — What Shall Be Done? 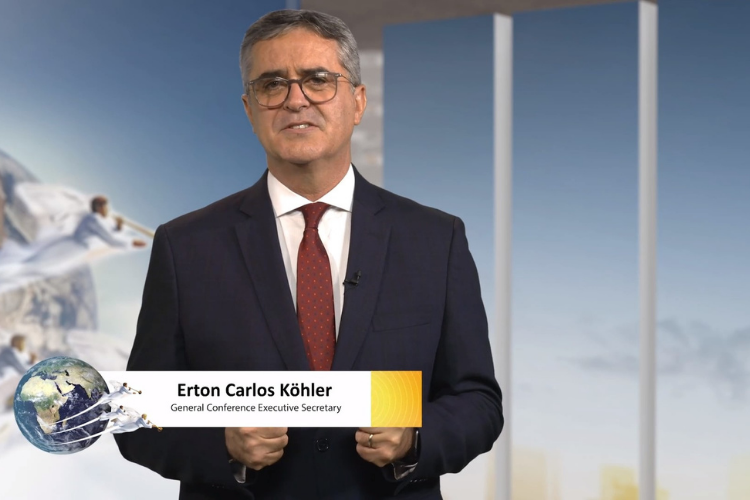 On Sunday, Oct. 10, precisely at 8 a.m. (Eastern Time), President Ted NC Wilson opened the business meeting of the General Conference Executive Committee. The historical precedence for Sunday business meetings at Annual Council comes from the pre-COVID era, when an effort was made to make the best use of time for the Executive Committee members who were traveling internationally. This year, when those international participants were Zooming in for the meeting instead, the Sunday session proved not to be as convenient. For whatever reason, there was only about 50% participation by the Committee members who total 342 in number. Early in the day, there were 198 who voted in the Election Buddy system test. Four hours later, 30 or so had slipped away. Included in that 342 number were 40 new members, primarily newly elected leaders from unions and divisions around the world.

Congratulations were in order, and thanks given by Wilson, for the work of the technical team that pulled off this hybrid event that included livestreaming in five languages, Zoom participants from around the world, and an in-person audience of about 70. The mix of pre-recorded videos, in-person presentations, electronic voting, and commenting kept the technical director busy. Even the Zoom people acknowledged this was an unprecedented setup, according to Hensley Moorooven, associate secretary of the General Conference.

Newly elected General Conference Secretary Erton Kohler, who is awaiting a visa to move to the US from Brazil, gave his report via Zoom. COVID impacted all parts of his report, but the Church is bigger than this crisis, he said, and it has reinvented itself during the pandemic, particularly through creative use of the internet and social media. He paid tribute to his predecessor GT Ng, who retired earlier this year, and to Cheryl Doss, who led the International Mission Institute for over 20 years.

Statistics punctuated each of the departmental reports from within the Secretariat (see membership numbers here), but Kohler also used them effectively. According to studies by Pew Research and Barna Studies, he said that from 2% to 28% of people surveyed said their religious faith became stronger during the pandemic. Only 3-9% say it is weaker. He lamented the 17,000 Adventist members lost during the pandemic, including 773 pastors, teachers, administrators, and church workers who died. He noted the resilience of the church as members continued serving God and being blessed, noting that 1,736 new churches were planted and there were 781,389 baptisms. He acknowledged that the greatest challenge during COVID was worship services but noted how quickly and significantly worship moved online. He said the average person spends seven hours a day on the internet, and that 42% of daily life is now online. Technology has come to stay, he said, but it should not replace the life of the church. This topic needs to be on the agenda of division, union, and conference meetings, he suggested, and people need to be our focus. Media can support Christ’s method of person-to-person evangelism, but cannot replace it. He closed with six points:

1. The church is a miracle from God. It wins because God is our leader and we need to depend more on him and less on ourselves.

2. Committed members carry the church. Nothing is accomplished without them.

3. Dedicated pastors that support members emotionally and spiritually, even when they fear virus contamination and death, plus continue to provide relevant messages in these times, these are the real heroes among us.

6. A clear mission carries us forward.

Kohler’s crisp Secretary’s report with its videos from the various Secretariat departments followed an agenda item for a “Special Coordinated Prayer Initiative for the 2022 General Conference Session and the Latter Rain of the Holy Spirit” that sprawled over two hours. Introduced at length by GC President Ted NC Wilson, there were videotaped testimonies by Kohler, Treasurer Paul Douglas, Committee Member Samuel Saw, Ministerial Director Jerry Page, Children’s Ministries Director Linda Koh, and newly baptized member Ed Incle, followed by an interview of Incle by Derek Morris and prayer for him by Wilson. Then Mark Finlay read an “Earnest Appeal” letter written by Ellen G. White to 1888 General Conference Delegates. “We could talk about this all day,” Wilson said after the Finley reading and before asking for a motion to ratify the item. Receiving a first and second on the motion, he opened it for discussion, saying he would allow two comments from the auditorium and two from Zoom. Merlin Bert, director of the White Estate, and Mario Ceballos, director of Adventist Chaplaincy Ministries, spoke affirmatively to the motion, but there were no Zoom responses. Wilson asked the auditorium audience to stand in affirmation of the motion and then enlisted prayers of support in five languages.

Approval for a change in status for the Northern Ghana Union Mission to the Ghana Union in the West Central Africa Division was the major policy agenda item addressed.

In summary of the day, Elder Wilson referred to the poem that Justin Kim had presented during the LEAD Conference titled “What Shall Be Done?” “Let us earnestly pray for God’s spirit to be present between now and GC Session, and at the Session, and in our own lives until the Lord comes. We’re coming to the end of time, let us plead with the Lord for his presence,” he said before reading his favorite text, Joel 2:21, about God doing great things. “Thank you for committing yourself to revival, reformation, repentance, and humility,” he said.

His list of commitments led me to wonder what might be coming up in the next couple of days. Prayer and Bible study, key components for revival and reformation, have been thoroughly addressed. But not much was said about repentance, particularly corporate repentance. Will organizational repentance be placed on the agenda? Would corporate repentance lead to the forgiveness, acceptance, and love necessary for unity and revival within the membership? The meeting resumes on Monday, again at 8 a.m. (Eastern Time).