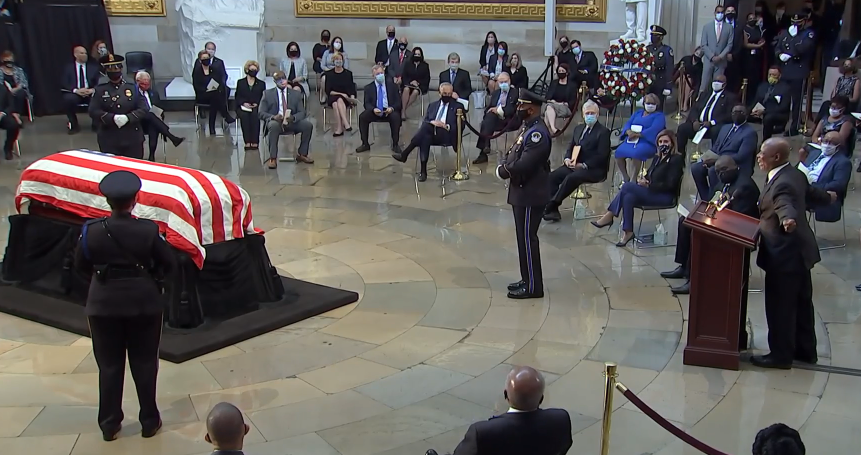 Wintley Phipps Sings at Congressman John Lewis’ Memorial. Wintley Phipps paid an emotional tribute to Congressman John Lewis, singing “Amazing Grace” and “Be Still My Soul” during a memorial ceremony at the U.S. Capitol Rotunda on July 27, 2020 in Washington, D.C. A civil-rights icon, Lewis died at the age of 80 on July 17th following a battle with pancreatic cancer. A Seventh-day Adventist, Phipps is a pastor, vocal artist, and the founder of the mentoring program U.S. Dream Academy. Over the last 20 years, Phipps has supported thousands of children, especially those of incarcerated parents, work on their goals and help them succeed personally and professionally. He holds a BA degree in Theology from Oakwood College (now University) as well as a Master of Divinity degree from Andrews University. Phipps has recorded more than 25 albums and performed for several U.S. presidents, including Barack Obama, Jimmy Carter, and Bill Clinton. From HITC, “Who Sang at John Lewis’s Funeral? Dr. Wintley Phipps Pays Emotional Tribute to Congressman!”

Oceanside SDA Pastor Creates Popular TikTok Videos about Chai. Pastor Kevin Wilson, an associate pastor who heads the youth ministry at Oceanside Seventh-day Adventist Church, expresses his love for spiced milk tea, or “chai,” through bite-size videos on TikTok. And the social media platform, wildly popular among teens and best known for its goofy dance videos, has loved him back. Wilson comes from a part of the world where a cup of tea — chai — evokes the gravitas of a religious experience. It was in childhood that the 29-year-old Sri Lankan native first developed his love for a good cup of chai. But he never thought to share his passion with the world until he discovered TikTok. In just about three months, Wilson’s chai videos have racked up millions of views and won him more than 106,000 followers. But underneath that patina of social media fame lies something more meaningful.

“I seem to have made a connection with people through chai,” Wilson said. “My [direct messages] are packed with people who say they wouldn’t have left church if I were their pastor. I have people telling me that in an age of outrage, your brand of Christianity is great. It’s really caught me by surprise that this content resonated so deeply with people.” From Daily Bulletin, “Pastor builds huge TikTok following by sharing passion for chai and spiritual conversation.”

South Africa-based Gospel Music Duo with Adventist Roots Brings Comfort to Sorrowing. South Africa-based gospel music duo Wilson Dlamini and Sabelo Mabhena believe they were brought together to spread the Word of God and bring comfort to those in sorrow through their music. “We chose Gospel music because we want to spread the Word of God and comfort those who are in sorrow. We recorded the album Impilo Yami in February, and it is about praising and worshipping God for what he has done,” said Dlamini.

Mabhena started his music career in 2009 when he was part of a singing group from his local Seventh-day Adventist church. The group called Sing Male recorded an album called Why Me. From Chronicle, “Duo seeks to give comfort through gospel music.”

Tad Worku’s Music Offers Hope during the COVID-19 Pandemic. Seventh-day Adventist Tad Worku, musician and emergency/trauma nurse at Loma Linda University Medical Center, writes music to offer hope to those impacted by the COVID-19 pandemic. Worku’s music comes from the perspective of someone who sees hope through the suffering and the healing nature of music and the impact of the pandemic from his perspective on the front lines. "Until we can be close to each other again, I'm hopeful my music will bring a little light and love into this situation."

In his recent song "Love Remains," Worku describes the strength needed to overcome adversity during difficult times. "I had no idea how applicable the music would be to what the world would be facing just months after I wrote the song," he said. "Music became part of my healing process when facing tragedies, and it's incredible to see it touch so many others in this time of crisis."

Worku, the son of Ethiopian immigrants, is no stranger to music or medicine. He has toured and performed with Grammy Award-winning musicians and producers who created hits for Beyoncé, Jennifer Hudson and more. To hear Worku's latest album, Love Is All, visit tadworku.com. From Cision PR Newswire, “Frontline Healthcare Worker Builds Hope Through Music.”

Listen to a Spectrum-exclusive interview with Tad Worku by clicking here.

Former Adventist Pens Sunday Law Worries in New Novel. For author Samuel David Steiner, writing Bipolar Winter, a fiction novel based on historical facts, crosses boundaries and looks into the history of Christianity. Steiner says he has always been intrigued by history and has done extensive research in the area of religion. "I wrote the book to share possible explanations for various events in the history of Christianity. As you read my novel, you may have questions about the historical content. I provide supporting information so you can make your own conclusions."

Steiner was raised in the heart of the Seventh-day Adventist Church and culture. From early childhood, he became aware that the current church was not teaching what the founders of the church had taught for over sixty years, heightening his concern that the church was indoctrinating children with the teaching that one day soon, the United States government would deny worship on Sunday instead of Saturday. Steiner says, "I decided to make my stance and put my knowledge into a fiction book to entertain and raise awareness." From Digital Journal, “Author Samuel David Steiner Releases “Bipolar Winter,” a Fiction Novel Based on Historical Facts.”