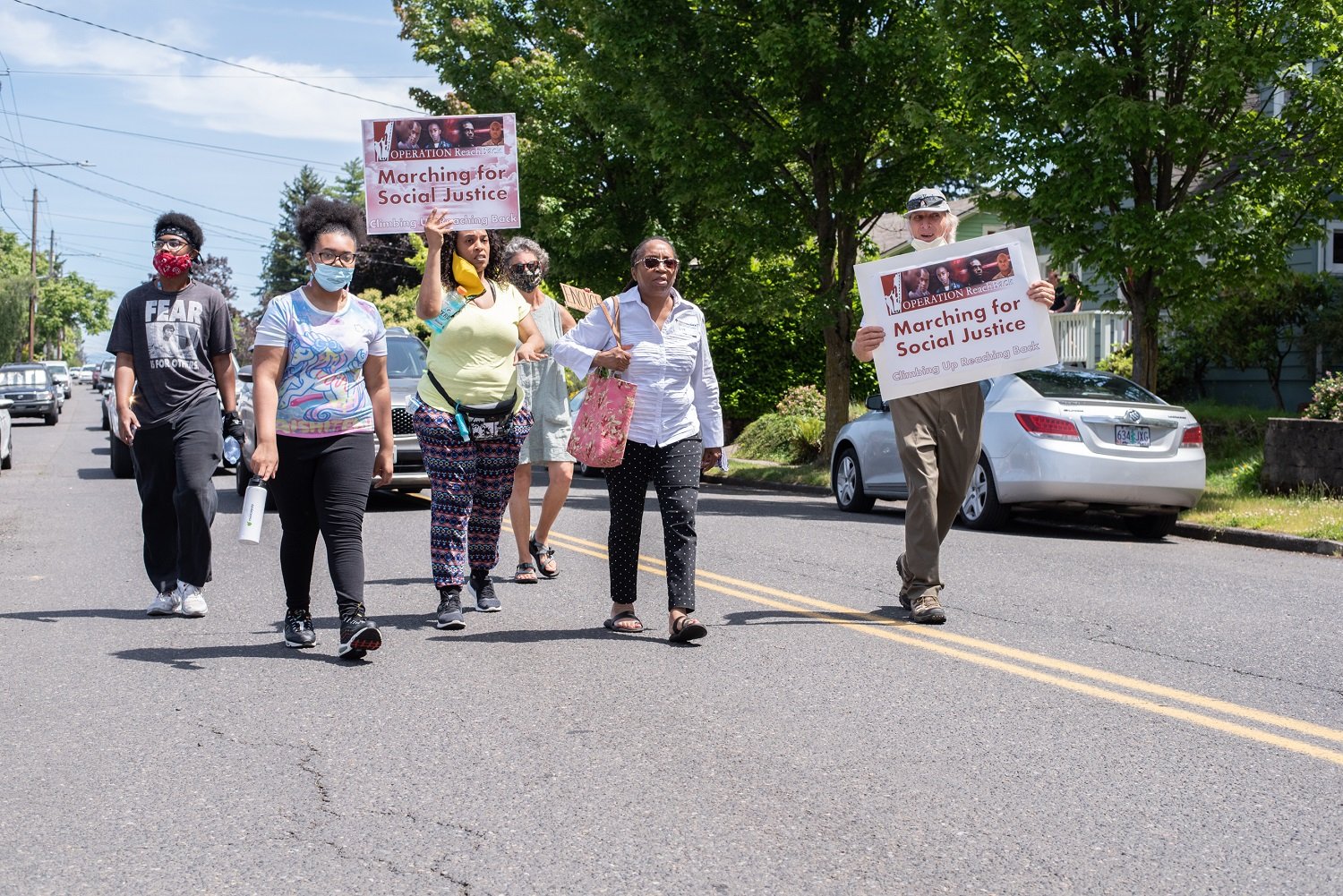 In locations across the country last Friday, Adventist pastors and church members took part in—and in some cases organized—marches and celebrations, both to protest racial injustice and to celebrate Juneteenth, the holiday memorializing emancipation. In Portland, Oregon, an event titled “Remembering Justice: An Adventist March for Social Justice” took place in the afternoon.

At 1:00PM, a crowd of approximately 120 gathered in front of Your Bible Speaks Community SDA Church in NE Portland. The plan was to march just over 2 miles to the Sharon SDA Church, through what had been Portland’s historically Black district that in recent decades has been severely impacted by gentrification. Several speakers readied the crowd, and a church elder addressed what the stakes of the afternoon would be.

The majority of attendees were from the Portland Metro area, though one Adventist pastor had driven from 5 hours away; others had come from the state capital of Salem. Pastors from many area churches were present.

Pastor Reginald Richardson Jr. spoke about the history of the neighborhoods that the group would be walking through. Richardson is the pastor of Your Bible Speaks, which along with Sharon are the only two historically African-American churches in the entire state of Oregon. Richardson assumed the role at the end of May, after graduating from Oakwood University, and just in time to coincide with America beginning a racial reckoning more widespread than any seen in recent memory. He is new in the role but familiar with the Portland community, having interned at the Sharon church while in college. 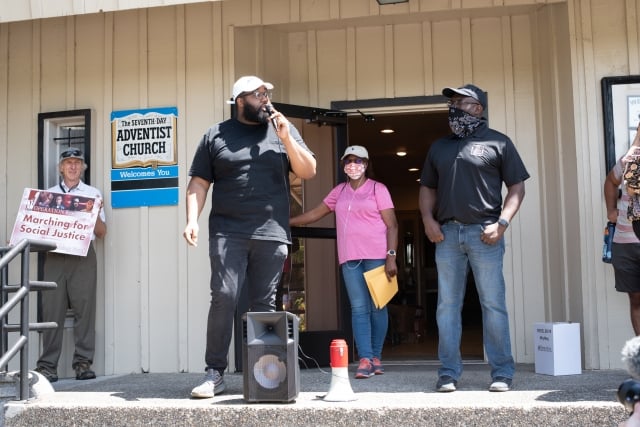 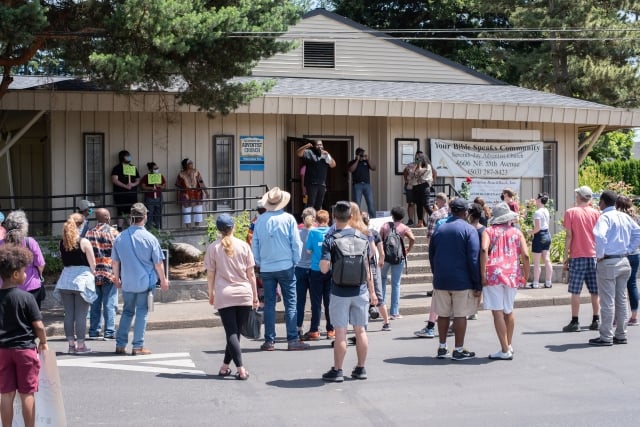 Pastor Garth Dottin, who has been the pastor of Sharon for three years, spoke as well. “Today we’re marching to celebrate freedom,” he said. “We’re marching for Juneteenth. We’re also marching for justice.” Both Dottin and Richardson had been involved in organizing several protests bringing together Adventists during the previous weeks, but this was the first focusing on the neighborhoods of their churches.

In the street, two pickup trucks lined up to lead the way, and three cars fanned out in a protective trailing formation. The crowd moved out onto the main road, and Richardson and Dottin took turns leading the crowd in call and response. 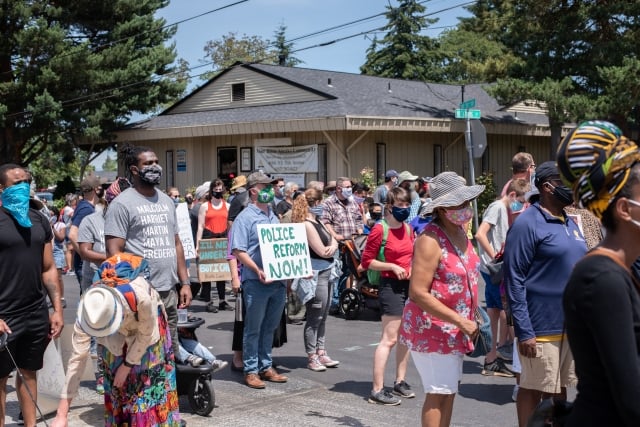 Attendees grouped together in the street in front of Your Bible Speaks Community SDA Church to prepare to march.

The day was one of the hottest of the year, and the sun on the asphalt made the air feel even warmer than the thermometer’s 90 degrees. Water bottles were passed around from the accompanying cars.

As the march moved through neighborhoods, people came out onto their porches or into their yards, sometimes raising a fist in solidarity, sometimes joining in the chants, sometimes banging pots and pans. Whoever had the megaphone at the front would at times call for passersby to join in marching—and some did. Cars honked, their drivers waving in support. Despite Dottin and Richardson warning the marchers that they might encounter people in opposition, reactions of motorists and other bystanders were overwhelmingly positive. 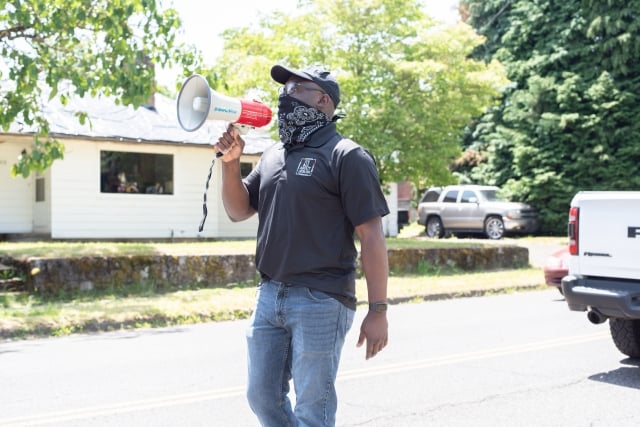 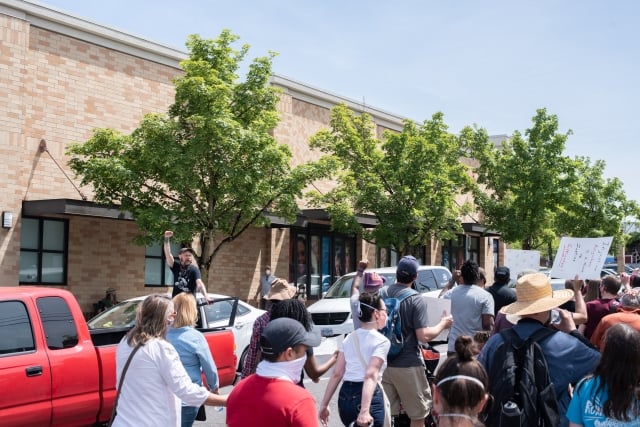 Some motorists got out of their cars to express their solidarity.

“We’re out here to advocate,” one young marcher, who identified himself only as James, said as to why he was there. “We’re out here to peacefully protest and to let our voices be heard, to try and invoke some change.” James attends Your Bible Speaks, and he carried a sign advertising Operation Reach Back, a program for giving assistance to community members in the form of clothes, or food that they grow in their own garden. “It means a lot to know we stand for the same things,” James said, referring to the sight of church members marching together. “We’re fighting for what the Lord wants us to do. And we’re doing it peacefully. There’s a part of me that feels really proud about that.” 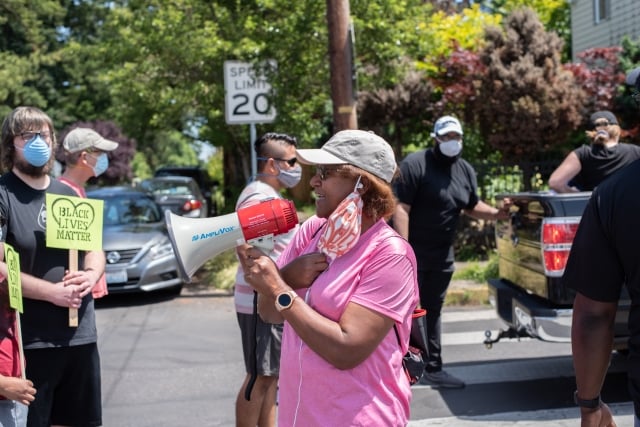 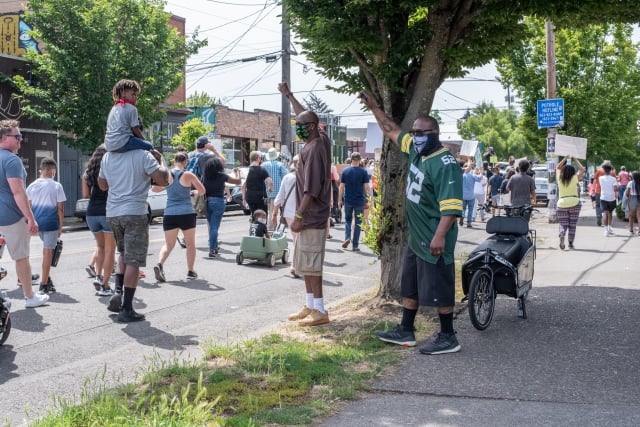 When the marchers pulled into the parking lot of the Sharon Church—people looking slightly sun-weary but otherwise in good spirits—a circle formed to hear more words from community leaders. Dr. Terry Johnsson, VP of Mission Integration for Adventist Health PNW Region, grew up in Portland, and he shared how his mother had been disfellowshipped from her church for going to hear Martin Luther King Jr., who was deemed a “trouble maker,” speak in 1961 when he came to town. “But she looks back now, 50 years later, and says that ‘the best thing I ever did was to be on the right side of history,’” Johnsson said. “So all of you who have come out, we’re doing this together, and I just want to thank you so much.”

Richardson was pleased with how the afternoon went.

“I think we had engagement from the community,” he said, after all of the speeches and prayers had finished and people were packing up. “There were non-Adventists [here]. There were Adventists here.”

“We used this moment to really show God’s love to others, and people are saying it’s great to see other Adventist pastors come,” he said. “I think it went as well as we could anticipate.” 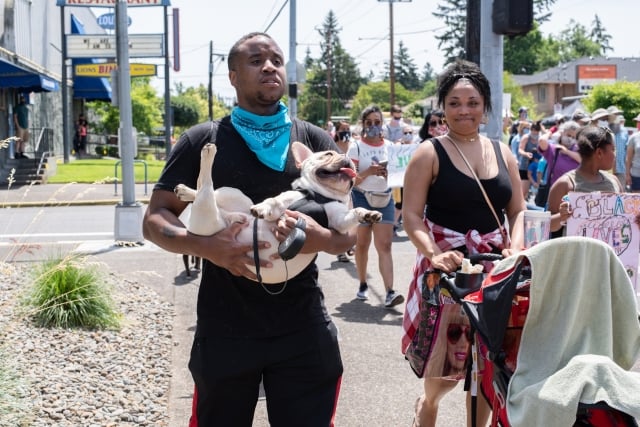 One dog, perhaps feeling the heat, got a lift. 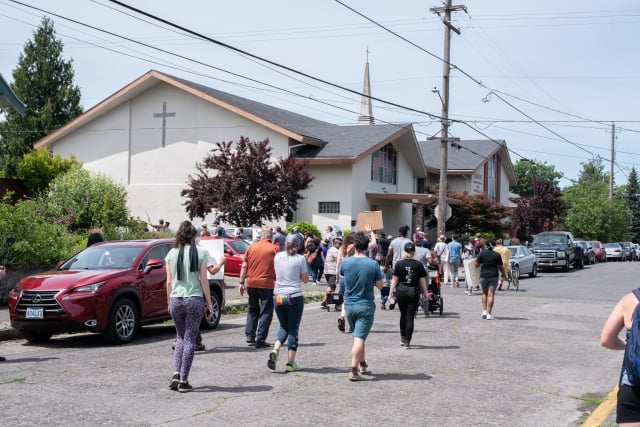 The march ended at the Sharon SDA Church.

Dottin and Richardson are excited about all the work they have done over the last several busy and chaotic weeks, but also are mindful of the many challenges that remain. Portland is the whitest large city in America, and it is still working to come to terms with the effects brought about by years of racist housing and other public policies. The Seventh-day Adventist church itself is also trying to reckon with its own history of segregation that continues to the present day.

“Now we need to do racial holistic healing for our church,” Richardson said. “The Adventist Church has to come together and realize that we have some issues and we have to address them.”

Earlier in the day, Richardson announced that a local chapter of Adventists for Social Justice would be forming to advance those aims. The work of bettering both church and community is nothing new to the Sharon and Your Bible Speaks churches, and that work will go on.

Alex Aamodt is the Roy Branson Investigative Reporter for Spectrum.

Photographs by the author.