New Life from an Old Grave 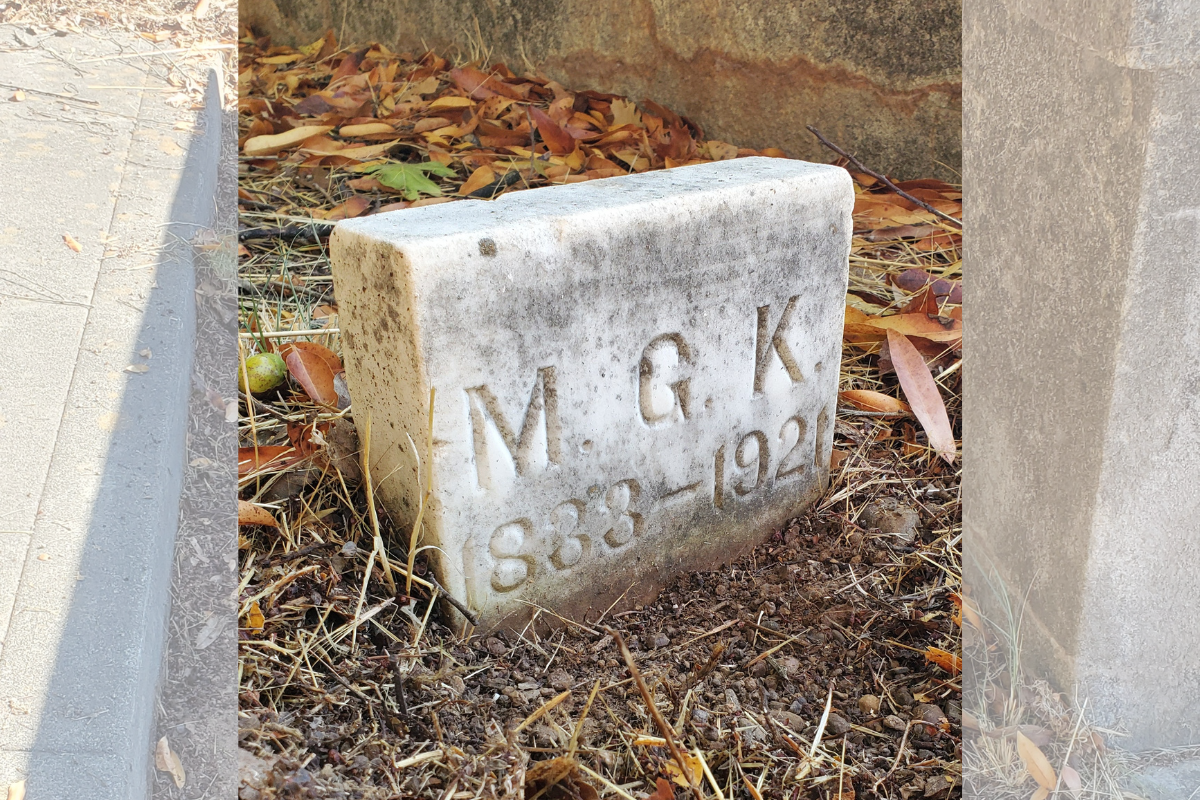 The grave of the man who brought Adventism to California, Merritt G. Kellogg, has been rediscovered. After almost three years of research, on November 14, 2020, brothers Jim and Lonnie Wibberding, along with Jim’s daughter Kara, found his grave at the Oak Mound Cemetery in Healdsburg, California. Besides being the first to preach Adventism in California, M. G. Kellogg founded what are now the St. Helena Hospital and the Sydney Adventist Hospital, planted several churches, served as a missionary on the Pitcairn, and more — investing half a century to build the Adventist mission.

My shoe strikes something hard and flat in the ashen dirt. I kick aside the crushed leaves and dust, then bend down to brush it clean with my hands. It reads, “Henry Louis Guerne.” That’s not him. A family of deer watch us through the mid-morning chill as we disrupt their tranquil cemetery, unearthing fallen headstones and inspecting those that still stand. “W. S. Kellogg.” Much closer. Maybe he is buried in a family plot. “Francis Elizabeth Kellogg.” Further down the hill, I saw a “Chester Kellogg.” But no “Merritt Gardner Kellogg.” I round the next plot.

I have been asking after this grave for three years now. No one seems to know where it is. Some historians say it is lost to history. Some say it could be in Australia. A year ago, I found an obituary that placed his burial at Oak Mound Cemetery, Healdsburg, California.[i] I thought that was the big find but an optimistic family outing was met with “no card on file for a Merritt Kellogg.”

Why does Merritt G. Kellogg matter to me? It is not his link to the Corn Flakes King, though W. K. Kellogg was his kid brother.[ii] It is not about his brother John Harvey Kellogg of medical fame,[iii] who developed treatments and built sanitariums around the world.[iv] It is not even some delusion that he was a flawless hero. No, he matters to me because Merritt’s gritty voice was the first to speak the Adventist Message in California[v] — and he spent the next half century expanding its reach across the State and beyond.[vi] He was a pioneer. We need pioneers. We could use a new band of pioneers about now.

The tale begins with a twenty-six-year-old farmer packing his wife and three kids into a wagon aimed west.[vii] He needed work. Before they left Jackson, Michigan, Merritt bought two pairs of new shoes. As he walked beside his oxen, the wooden pegs that held the soles to his feet fell out, one by one. He would walk hundreds of miles barefoot before a Native American man sold him a buffalo hide and set his squaw to sewing moccasins.[viii]

The pioneering spirit that swept Merritt across the continent was in the air of his boyhood home. His father, John P. Kellogg, ran a station on the Underground Railroad[ix] — a risky act of civil disobedience perpetrated to guide escaped slaves to freedom in Canada. His stepmother, Ann Stanley, who took on five stepchildren at age eighteen, was the consummate domestic innovator.[x] The resulting family culture might partly explain the can-do pioneering of Merritt and his brothers.

In 1859, Merritt, Louisa, and their three kids landed within reach of San Francisco.[xi] There, in the fading glint of the Gold Rush, he shared his faith.

It feels personal to me. He was the first to preach my precious Adventist faith in the space[xii] where I now train the newest generation of Adventist preachers. That stirs me at a deep level. It’s a big part of my drive to find his grave.

I look up from my work to check in with my daughter, Kara, and brother, Lonnie. They offered to help me give this search another try, which is why we are here this Sabbath morning — even though my wife, Laura, and I had canvassed this graveyard already and came up empty. Laura teaches a class on the History of Adventism in California and I teach an Adventist history class called Intro to Adventism at Pacific Union College — cementing our partnership as hobbyists in Adventist History. It feels good to share the hobby with Lonnie and Kara today.

I call to them, “Find anything yet?” They shake their heads. I climb over a fallen oak and try to make out the words on stones through its gnarled branches. No Kellogg that I can see. So, I clamber deeper into the woods, where I spot more collapsed monuments. Our thinking is that his faith in the Second Coming might have led him to buy a plot on the hilltop, so I scramble that direction. Another thought is that early Adventist frugality might mean he or his widow bought the cheapest spot with a simple stone. I steady myself on the uneven hillside to peel back the layers on another buried headstone.

When they came west, Merritt’s small family was part of a developing movement. It was so new that it hadn’t really been named yet. It would be two years before the group chose the name Seventh-day Adventist.[xiii] Although Merritt was a farmer turned carpenter, when he preached, fourteen people accepted the Adventist message.[xiv]

For the next seven years, he agitated for the leaders in Battle Creek to send evangelists to expand his solo work in California. Eventually, John Loughborough and Daniel Bourdeau came to help.[xv] With relief on hand, Merritt didn’t slow down; he redoubled his mission work. The next five decades saw him start churches, build hospitals, serve as doctor on the missionary ship Pitcairn, and plenty more.[xvi] Merritt Kellogg and John Loughborough formed a duo that built California into the second great center of Adventism.

He outlived, or almost outlived, most of the other first-generation pioneers. In his final years, hearing and vision loss further isolated him.[xvii] When he died, there were few friends left to remember him. But I want to remember him.

I stoop over another hidden grave.

“Hey guys, I found something,” Lonnie calls. Kara and I abandon our posts and head his way.

I feel a surge of hope but tamp down my response. “What is it?”

Lonnie looks up from the small stone he is studying. “Did you say his initials were M. G. K.?”

“What were his birth and death years?” he asks.

Could this be the big moment? We begin to debate the possibilities. Either his birth year is wrong on the headstone or the other information we have is wrong. Or maybe it’s not his grave. I pull up some vital records on my phone as we debate theories. Our hopes are growing. His death certificate has a mistake in the birth year box, listing both the year of birth and the year of death as 1921.[xviii] Could that explain it? Maybe the person calculating his birth year from his age got it wrong. 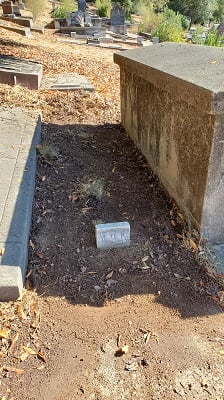 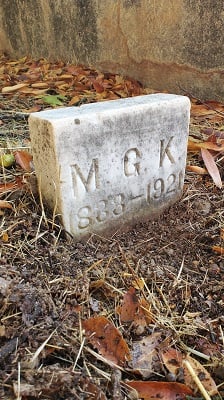 The analysis and research drags out over the next day and a half, until I get through to the curator at the cemetery (Sarah) on Monday morning. She asks what surrounds the grave we found. I tell her the names on the stones on both sides of M. G. K. 1833 – 1921. “Let me look this up and call you back,” she says.

I wait and wonder, bracing for disappointment. Then, my phone begins to buzz. Sarah’s voice rings with excitement, “You found it!” Her first words.

“Really?” I ask in disbelief.

“Yes, I was able to find the grave number by the information you gave me. In the old folder for that grave number, there is a record that says, ‘Merritt Gardner Kellogg.’ It’s him. You found it.”

As my grin widens, I quickly rehearse why Merritt matters to me, and to others in our Adventist community. Then, she asks, “How in the world did you find it?” It was a needle in a haystack. It had no name on it (just initials), had the wrong birth year, was tiny and hidden between bigger monuments, was not in a family plot, and had no card on file to find it by. On top of that, the cemetery, state, and country of his burial were not known for decades.

How in the world did we find it? Frankly, I am not sure how we found it. I prayed that God would help us. Lonnie says he prayed, too. Maybe it is as simple as that. Or maybe God wants us to remember Merritt’s story at this time in history. Maybe, in our time of crisis, we could use a good story to remind us that we are still on a mission and, as missional pioneers, we are called to pioneer new ways to share Jesus. Maybe, if we take a moment for reflection, this concrete reminder of a good old story can bring new life from an old grave.

If you are ever in Healdsburg, California, you might stop at the Oak Mound Cemetery and ask Sarah where to find Merritt Kellogg’s grave. There’s a card in the catalog now. It could be a chance to refresh your own missional tenacity. Better yet, take a moment where you are and ask God what he plans for the mission and you. It could be time for new life from an old grave. 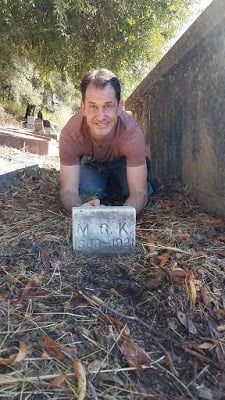 Jim Wibberding, DMin, teaches in the Theology Department at Pacific Union College. His hobbies are building musical instruments, restoring his classic cars, and exploring Adventist history. Jim is happily married to Laura and, together, they enjoy parenting three kids.

Photos courtesy of the author.