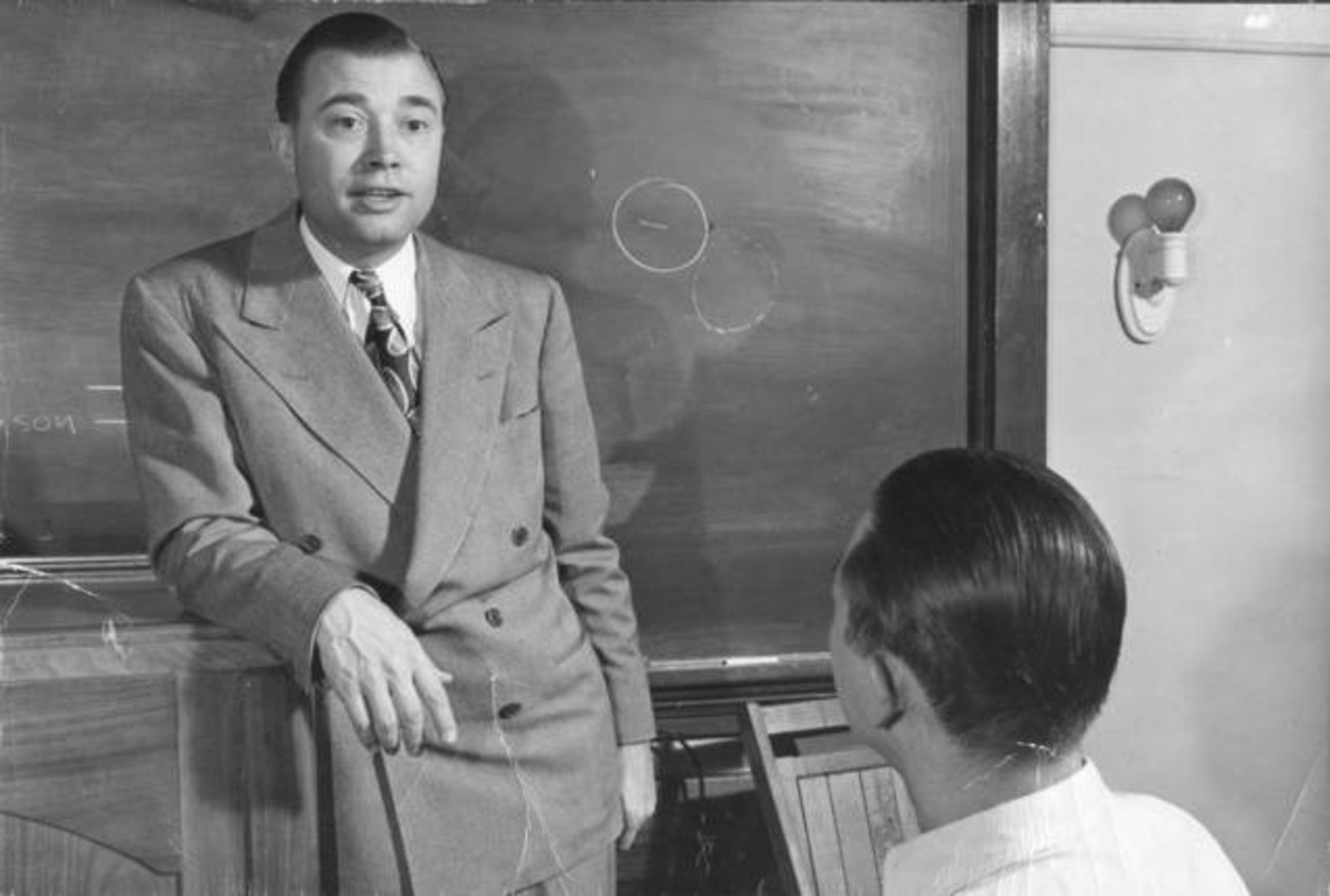 Editor’s Note: This profile of Molleurus Couperus, founding editor of Spectrum, was written by James L. Hayward for the Encyclopedia of Seventh-day Adventists (ESDA). It is reprinted here with permission from the ESDA.

Molleurus Couperus was a professor of dermatology at Loma Linda University during the mid-twentieth century. He enjoyed broad interests, especially those involving issues related to science and faith. He served as the founding editor of the independent Adventist journal Spectrum.

Molleurus Couperus was born in Essen, Germany on January 17, 1906, although he spent most of his childhood years in the Netherlands. When he reached college age, he immigrated to the United States to attend Emmanuel Missionary College (now Andrews University). After completing a Bachelor of Arts degree with a “Literary” major in 1927, he served for one year as a missionary in the Dutch East Indies (now Indonesia). Upon finishing his year in Southeast Asia, he returned to the United States to continue his education at the College of Medical Evangelists (now Loma Linda University), graduating with an MD in 1934.1

Over the next several years Couperus studied at Edinburgh University, Scotland, took three years of specialty training in dermatology at Columbia University, New York City, and began teaching at Loma Linda University in 1942, after earning board certification in dermatology. He taught dermatology at Loma Linda until granted emeritus status in 1981; from 1973 to 1977 he served as chief of the Dermatology Section of the Department of Medicine. He was described by colleagues as unfailingly cheerful, courteous, affable, capable, intelligent, polite, and caring.2

Couperus enjoyed broad interests and traveled widely. In addition to his professional teaching and clinical practice, Couperus studied theology, translated works from English to other languages, and took special interest in issues related to science and religion. Aside from his responsibilities at the medical school, the relationship between science and religion attracted most of his attention. He developed expertise in physical anthropology, particularly paleoanthropology, and he taught a course in physical anthropology for many years at the University of California, Los Angeles. His extensive international travels provided him with many adventures. During one trip to the Middle East, he was asked to treat the ailing grandson of Jordan’s King Abdullah I, Hussein. Years later, having ascended to the throne, King Hussein thanked Couperus for saving his life.3

Participation with Issues Related to Science and Faith

As a young man, Couperus defended traditional views of Seventh-day Adventist creationism, similar to those of his contemporary, George McCready Price. In a 1942 article in Ministry magazine, Couperus, still in his dermatological residency at Columbia University, praised Price, writing that “it is gratifying to know that the ceaseless toil and labor of many years of research and writing by Professor Price have not been in vain, and are bearing a rich fruitage.” Couperus challenged fellow Adventists to continue to “take a leading part in the fight against the theory of evolution… since we find few outside the ranks of Seventh-day Adventists defending the account of creation as written in Genesis.”4 As a means of educating himself about the issues involved, he attended lectures at Columbia delivered by Theodosius Dobzhansky, the Russian émigré who played a major role in the “modern synthesis” of evolutionary theory. Couperus also developed a keen interest in radiometric dating, believing that the truth or falsity of the entire theory of evolution was based on the age of the rock layers and the fossils they contained.5

After moving to southern California in the early 1940s, Couperus became an active member of the Society for the Study of Creation, the Deluge, and Related Science, also known as the Deluge Geology Society (DGS). The DGS was the brainchild of Price and like-minded friends, mostly Seventh-day Adventists, who defended the view that creation of both earth and life occurred a few thousand years ago, thus negating the possibility there was sufficient time for organic evolution to have taken place. In this view the great flood described in Genesis was responsible for most fossils and the rock layers in which they are preserved.6

Beginning about 1943, a controversy developed among DGS members involving the question of when the material of the earth was created. Some members were adamant that both the substance of the earth and the life it supports were created ex nihilo only a few thousand years ago. Given his understanding of radiometric dating, however, Couperus was not so sure. He believed there was ample time for the billions of years demanded by radiometric dating between the “In the beginning” described in Genesis 1:1 and the creation of life. George McCready Price himself temporarily became convinced by Couperus’s logic and evidence, stating that “the body of the earth had existed long before Creation Week,” and estimating the universe to be “about 2,000 million years” old. But Couperus’s defense of this “gap theory” perspective greatly stressed some of his more conservative colleagues in DGS.7

Fallout from the DGS controversy led to reorganization of the society under a different name, the Natural Science Society, which published a new, short-lived journal, the Forum for the Correlation of Science with the Bible, to which Couperus was appointed editor in 1946. Only two volumes, 1946–1948, were published, both of which featured articles addressing the age of the earth. “Young earth” and “old earth” advocates contributed articles and rebuttals, including a piece from Couperus. Much of his article was a discussion of the meaning of various Hebrew words used in Genesis predicated on the assumption that “there was some reason in the mind of God why certain words were used to express the inspired thought instead of some other word.” From his word study, Couperus concluded that “‘in the beginning’ refers to a time which preceded the six days of creation, and that the Bible gives us no information as to when this beginning was.”8

In the 1950s Couperus began attending professional meetings for anthropologists, and he took coursework in physical anthropology at the University of California, Los Angeles. In the 1960s he developed a friendship with Louis B. Leakey (1903–1972), the internationally known paleoanthropologist from Kenya, and spent significant time with Leakey studying fossil hominins in East Africa. As Couperus immersed himself more deeply in professional anthropology his views diverged from the positions of his former DGS colleagues. He quietly shifted to the view that God had used natural processes over a long period of time to create the diversity of life we see today.9

In 1967 a group of graduate students and church leaders developed plans for an organization that would serve the intellectual needs of Adventist graduate students. They took the name the Association of Adventist Forums and christened its journal Spectrum. Couperus served as the journal’s first editor from 1969 to 1975, a role he considered to be his most important contribution to the Seventh-day Adventist Church. Many of the articles he solicited and published during those first years reflected his long-standing interest in theology and the history of the earth and life.10

In 1980, a year before earning emeritus professorship at Loma Linda University, Couperus authored a retrospective entitled “Tensions between Science and Religion” for the journal Spectrum. After suggesting that the “apparent fixation [of Adventists] on the issue of time invites comment,” he went on to ask, “Was it overblown and unnecessary? Many Adventists would say ‘yes.’ Surely time is intrinsically of limited importance to our understanding of God’s nature and character. Are not 1,000 years as a day for God?” He concluded by contemplating the impact the concept of extended time would have on Adventist perspectives:

This exemplifies Couperus’s prose style, which was vigorous, erudite, often eloquent, and clear. He could be quite persuasive, yet the positions he propounded are still held only by a minority of Seventh-day Adventists; he had, indeed, helped to give rise to the “tensions over origins” that he wrote about in 1980. Nevertheless, in contributing to important conversations about Creation and the relationship between faith and science, Couperus did a service to the Church, even though he generated considerable controversy.

Molleurus Couperus died in Loma Linda, California on January 31, 1998 at age 92, having participated in Adventism’s science-faith discussions for more than a half century. He was not as widely known as other Adventist science-faith apologists. Most of his written work was directed toward fellow academics rather than the lay public. His influence in shaping the views of Adventist scholars on issues related to earth history was significant.12 He also, however, helped to stimulate scholarly debate about a range of other issues, giving a voice to the increasing number of Adventist professionals. The career of Molleurus Couperus in a number of ways exemplifies some trends in late twentieth-century Adventist scholarship, especially in North America. James L. Hayward is Professor Emeritus of Biology at Andrews University. He is the author of The Creation-Evolution Controversy: An Annotated Bibliography (1998), selected as an Outstanding Academic Title by Choice, and the memoir Dinosaurs, Volcanoes, and Holy Writ: A Boy-Turned-Scientist Journeys from Fundamentalism to Faith.