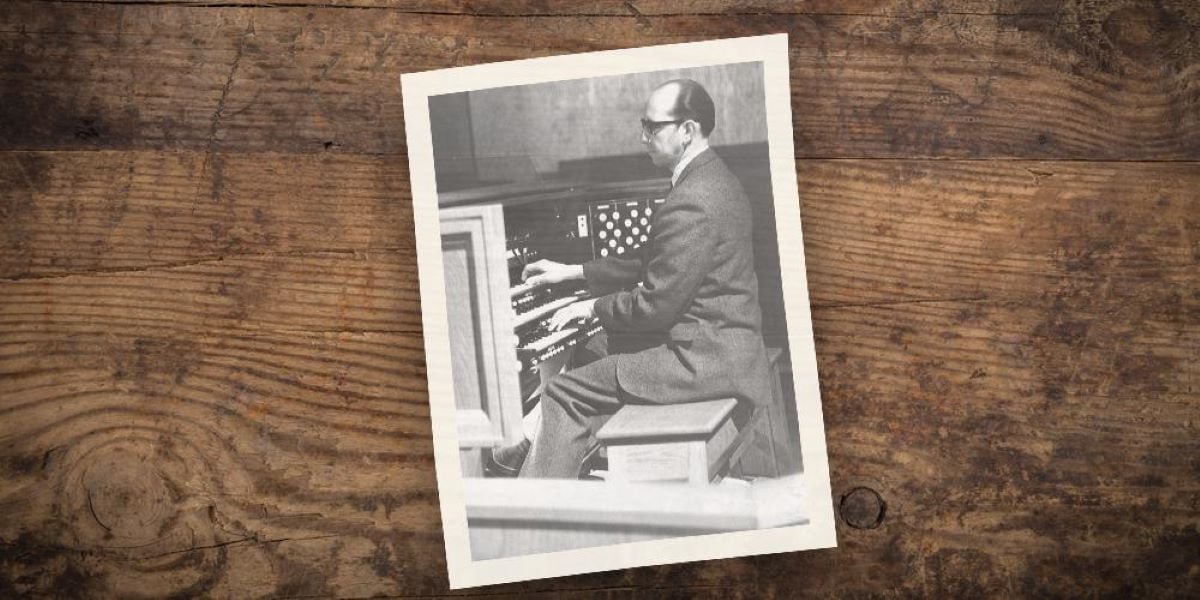 As the teenager from British Columbia took his seat at the organ at the Green Lake Seventh-day Adventist Church in Seattle, Washington, a number of years ago, Kraig Scott, now a music professor at Walla Walla University, was scared.

Scott knew the work assigned him by Melvin K. West, head of the music department at what is now Walla Walla University and a fellow of the American Guild of Organists, was beyond his capabilities at that moment, yet the young man pressed on, doing his best.

“I knew I had absolutely bombed and was terrified,” Scott recalled. “I don’t remember his exact words, but first thing he said was not just encouraging, but pointing out something he liked that I had done. It was such a gracious moment. He won me over in that one sentence and taught me about how to teach a student.”

Such graciousness was a hallmark of Melvin West’s life, which reached its end on December 27, 2019, in Portland, Oregon. West was 89 years old, a family spokesperson reported. A cause of death was not disclosed.

West, who served Seventh-day Adventist institutions for more than 65 years, chaired the Tunes Committee and was an associate editor of the Seventh-day Adventist Hymnal, published in 1985 and still in use by the 21-million-member movement today. He contributed more than 30 arrangements and hymn tunes, said to be “the largest contribution by any one person in those areas,” according to a biography online at the International Adventist Musicians Association.

James Bingham, a veteran Seventh-day Adventist musician, educator, and a Tunes Committee colleague, noted West’s skill at managing the process. “He was a very capable committee chair, going the extra mile to find either compromises or appropriate tunes to lend to hymns,” Bingham said.

“When it came to Mel, with all the many, many years of being on committees, few committees that he got on as well as the hymnal committee. I think the product that was produced from it is proof of how positive it was,” Bingham added.

Dan Shultz, an oboist and educator who followed West as music department chair at Walla Walla, said the educator was “a pivot point in my life.” Shultz had met West, who was teaching at Atlantic Union College, in 1958. West told the young man, “You should be in music,” and, according to Shultz, his life’s direction changed.

West taught at Atlantic Union College from 1953 to 1959 and then began an 18-year career at what is now Walla Walla University in College Place, Washington, with 15 of those years as chair of the school’s music department. During the 1962-63 school year, West began an evensong program at the school as a way to conclude the Sabbath, which continues to the present. The school named its Fine Arts Center—a building West had helped design—after the educator in 1996.

In 1977, West left College Place to become the church’s first full-time minister of music, serving at the Seventh-day Adventist Church in Kettering, Ohio. In 1981, he went to Union College in Lincoln, Nebraska, as a music teacher and director of development and alumni affairs. He also served the College View Seventh-day Adventist Church in Lincoln as its minister of music, leaving in 1982 to become director of music at the Westminster Presbyterian Church in Lincoln, serving there until his retirement in 1988, when he relocated to the Pacific Northwest.

Melvin K. West was born in St. Paul, Minnesota, a child of Laurence and Thelma West. The family relocated to Lodi, California, when he was young, and during his high school years at Lodi Academy, he studied the organ under Allen Bacon of the College of the Pacific. Although he began his undergraduate studies at Union College in 1948, he transferred to what is now Andrews University, from which he received a bachelor’s degree in organ.

West continued his studies at the University of Redlands in California, earning a Master of Music degree there. He received a Doctor of Music Arts degree from Boston University in 1959.

West is survived by his wife, Betty Ann; Lynelle, a daughter; Larry, a son; and three grandchildren. Memorial service arrangements are pending.

This article was written by Mark A. Kellner and originally appeared on the Adventist Review website. It is reprinted here with permission.