The City of Kenosha has been through quite a bit in the past week. As the head pastor of WISEN and the Kenosha SDA Church, and a resident of nearby Racine (only nine miles out from ground zero for Kenosha’s unrest), I’ve kept a pretty close eye on all of the goings on. For the first few days of the crisis, I mostly scoured all of the local news updates so that I could best know how to answer any questions, address any fears, or lift up any prayer requests that my church members might have. I did have a memorial service on Monday, for a member who had recently passed. However, it was cut short due to local fear of outside agitators coming to town. There really wasn’t a whole lot more that I felt I could do in those first couple of days, other than watch and pray.

After those first three nights of unbridled unrest, things settled down enough that one of my board members and I were able to venture downtown and assess the situation ourselves. We saw the torched car lots, the buildings turned to rubble, and the public messages in graffiti. Much more palpable, however, was the expression on people’s faces — as if they were carrying a lot of weight, silently, as they went about their day. A few were chipper and welcomed us in, with all the enthusiasm of rave-going Gen Z volunteers, pioneering the first wave of help. But overall was this feeling of anticipation as another night, sure to be filled with conflict and chaos, quickly approached.

It was after that visit that I knew in my heart that we had to do something different for church. Sticking to the traditional service wasn’t going to cut it, and honestly, I didn’t feel like preaching, well, anything from the pulpit, so far away from the very real needs downtown. So, I called an audible and rallied the local church membership together for a “Service Sabbath” in downtown Kenosha. We met for a short service of singing and a sermonette at 10:00 a.m. on Sabbath morning, and then afterward we split into two groups to address community concerns.

The first group went to uptown. Uptown bore much of the brunt of the destruction and was already an oft-neglected part of town before the riots. In Kenosha, most storefronts have apartments above them, and we know of at least one family that was displaced due to the burning of a shop with an apartment overtop. A man named Bob, who owned the Danish Brotherhood Lodge, had his jaw broken in two places before the crowd burned his building to the ground. We were able to pray specifically with him and I was personally struck with his attitude. “What do I need prayer for?” he asked. “I’ll be fine. I’ll heal. It’s our city that needs prayer. Pray for unity.”

While it was discouraging to see the damage that had been done there, it was also incredibly encouraging to see all of the volunteers there beside us. One church had set up a food pantry, others were going around handing out water bottles, and yet others were organizing painters all over the city to dress up the boarded up windows that now had become the standard on most buildings. As much as there was complete sadness in the air, there was also a shifting, an excitement even. The art on one board summed it up perfectly: “Difficult roads often lead to beautiful destinations.” Even amidst the ashes, the community had begun to experience the joy of new life. 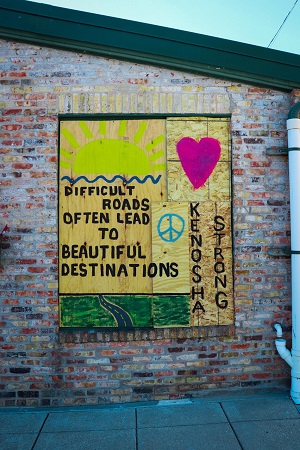 The second group went to pick up trash at 28th Avenue and 40th Street, the neighborhood where Jacob Blake’s family lives and where he was brutally shot seven times in the back by a police officer. We went there at the suggestion of the local Kenosha SDA Church Pastor George Andrews III, who resides in and knows the city well. His group was able to address a neighborhood that likely needed cleanup before all the unrest. The Blake family was out and about for the day (they were organizing a march in the afternoon), but the group was able to connect with some local residents and pray with them, on top of beautifying the neighborhood.

While it takes much more than picking up some trash on the side of the road to change the long traditions of brokenness and injustice in a community, it’s not a bad place to start. The Blake family is going through a lot right now, and we’ll continue to reach out for ways to uplift and support them.

After a couple of hours out and about, we all met back at Library Park for lunch and to discuss our experiences. As we fellowshipped over food, there was a definite feeling of excitement to be a part of the restoration God has in store for Kenosha. Our local churches, as well as some local businesses, pitched in to make a feast possible for volunteers — to the point where we were able to serve a lot of folks, aside from our volunteers, a free lunch. The celebration felt like a sufficient way to end an already spirited day. 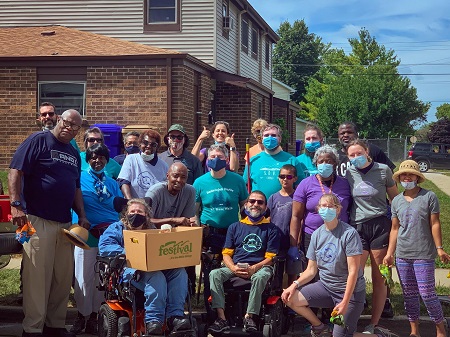 I ended up in downtown Kenosha again the next morning to meet with a family who wanted to come back and do some more painting. I got there a little early, so I walked around and snapped some pictures of artwork down streets I hadn’t been yet. One storefront was graced by an appropriate Bible verse, Jeremiah 29:11, retooled for local context: “For I know the plans I have for you Kenosha, says the Lord. Plans for good and not for disaster, plans to give you a future and a hope.”

Our community has been through a lot. We want justice to reign here. For my church leaders and I, it’s an ongoing effort to educate, to work with the community, and to speak truth to power. But, in the meantime, we got to be part of an effort to keep hope alive this weekend. I’m excited to see the plans God has for Kenosha. 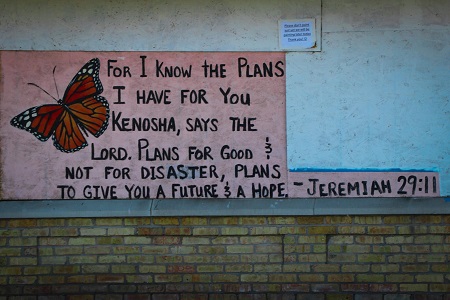 Zack Payne is the pastor of WISEN (Wisconsin’s Southeastern Network), comprising Racine and Kenosha counties. He and his wife, Allison, are raising three young children in the City of Racine. Zack is passionate about bringing the church into the 21st century, and creating healthy, sustainable congregations.

All images courtesy of the author.