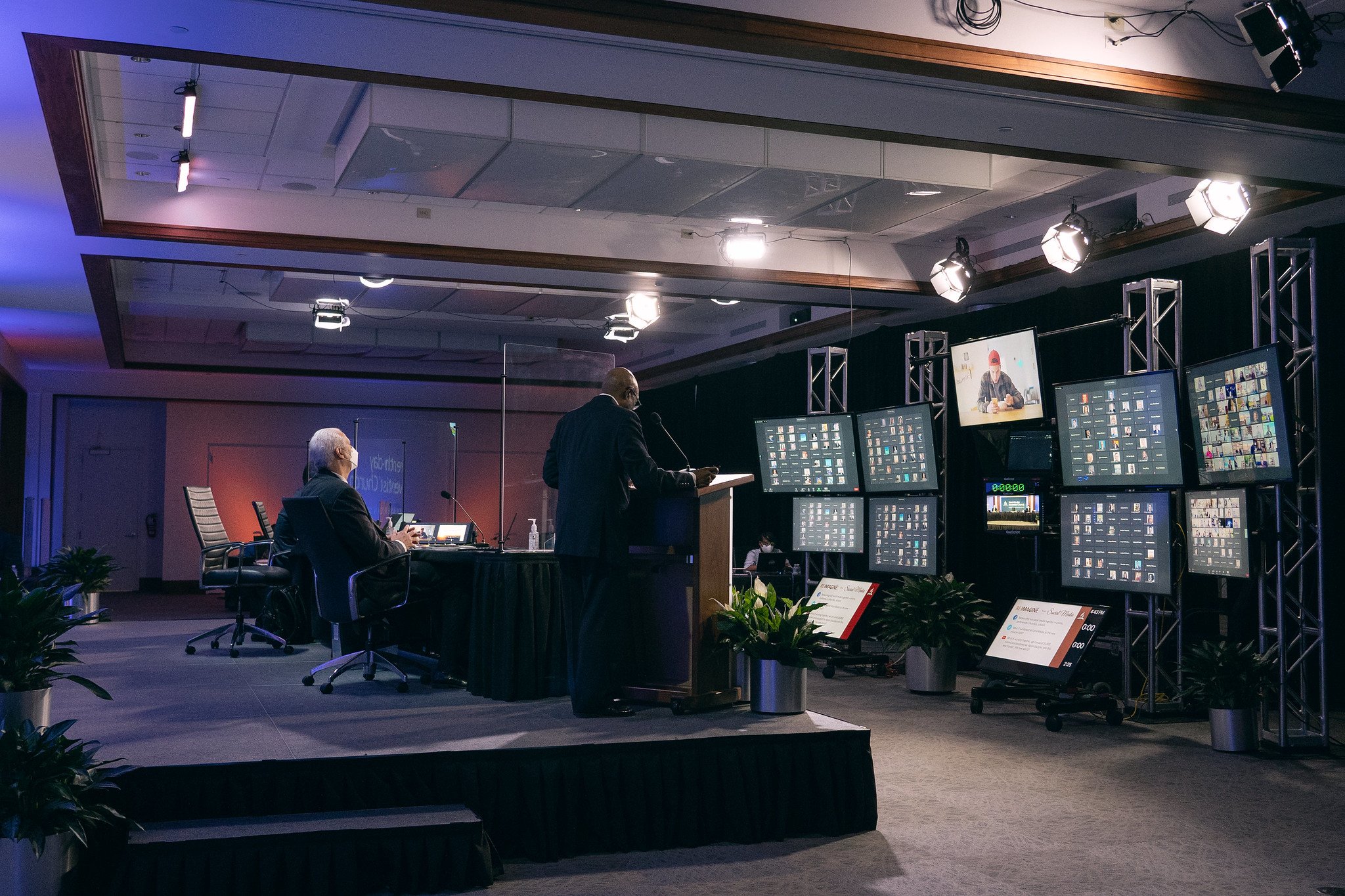 Admonitions to go boldly, dream bigger, and get ready for what comes after the coronavirus flowed through the presentations made to the Zoomed together North American Division (NAD) Executive Committee during its Year-end Meeting (#NADYEM20) on Sunday, November 1, 2020. The Division officers were at the headquarters building in Columbia, Maryland sitting six feet apart on the platform in the regular meeting room with Plexiglas dividers between them. A huge bank of video monitors served as the audience with 12 screens displaying the Zoom mosaic of committee members. General Conference President Ted N. C. Wilson described the scene as looking like a space craft command center.

Wilson, who lives nearby and attended in person, greeted committee members and expressed sympathy to the families who have lost loved ones to COVID, but the virus will not stop the proclamation of the Gospel, he said. He expressed his thanks for the emphasis on evangelism and encouraged people to pray for the latter rain. Focus on the Strategic Plan, he said, contextualize it for North America. The “I Will Go” logo for the plan came from students at the Adventist university in Argentina. “They wanted us to remind people that young people came up with the idea.”

Bonita Joyner Shields, NAD vice president for ministries, set the tone for the day with her devotional message on boldness. She said that boldness comes from spending time with Jesus, spending time in prayer, and assembling together. It takes boldness to love mercy, do justly, and walk humbly with our God.

NAD’s newly elected Secretary Kyoshin Ahn gave credit to and thanked his staff members by name at the beginning of his report on the 2019 membership numbers: 1,262,927 members, 5,621 churches, 880 companies. There was a net increase of 5,734 members from 2018 to 2019. He broke down the membership totals for each union and added that 42% of the members live in the two unions with the highest membership: the Southern Union with 306,088 members and the Pacific Union with 222,694. The two unions that have shown more gains than losses are the Southern Union and the Columbia Union. However, the overall rate of growth is declining. In 2012 it was 1.77%, but has dropped to .04% in 2019. The NAD now accounts for 6% of the global church membership.

Ahn provided contextualization for his numbers with information about church attendance during COVID from the Pew and Barna Research Groups showing that online attendance has been greater than in person church attendance, and that most people say that when the pandemic is over they will go back to their church. “We are not sure what the new normal will be,” he said as he posed the question “What shall we do?” He took his answer from Luke 10:27, “Love your neighbor, that is what God wants us to do.” If we keep loving God and loving our neighbor, then we will be all right, he concluded.

COVID’s effects on church life came up frequently as ten departmental leaders made short crisp presentations. During the Christian Record Services constituency meeting, President Diane Thurber said that contributions were down 8% because of COVID. They had used $80,000 from reserves to balance the budget, but were seeing a rebound of giving in the third quarter and hoping for a strong year-end.

Chaplains have been very busy during COVID, according to Chaplaincy Ministry Director Paul Anderson and his assistants Washington Johnson II and M. Gilda Roddy. They advocated for pastors to be certified as chaplains as a way to serve the community, and they also requested that Chaplaincy Ministry personnel be included in ordination services to demonstrate the variety of ways to serve. “Just Do It,” they concluded.

Health Ministries Director Dr. Angela David Brauer described the many webinars that her department has sponsored, and highlighted the Collegiate Advocates for Better Living, students such as Iamme Price at Oakwood University who has developed a following for her thirty minutes of faith and fitness program.

Erica Jones, assistant director of Women’s Ministries, also emphasized the experience of young women in her presentation on Gorgeous2God, as she shared the kinds of messages that she has heard from young women about dates gone bad, about addictions. Most youth don’t feel like they can ask questions of their parents or their church, she said. Listening to them and valuing their journey, not just their destination is crucial.

Ivan Williams, ministerial director, described dreaming big about evangelism. While 2022 had been planned to be the year of evangelism, after discussions with conference and union officials the suggestion was made to expand that to five years of evangelism and to set a goal of 40,000 baptisms each year or 200,000 for the five-year period.

Thomas Lemon, vice president of the General Conference, informed the participants about the plans for the 2021 General Conference Session now set for May in Indianapolis. He acknowledged the travel restrictions that could potentially prevent delegates from some areas of the world being able to attend in person. For instance, the church in Canada has already informed the General Conference that they will not be able to send delegates to the meeting because of such restrictions in both Canada and the US. The GC Constitution requires that 905 delegates (one third of the total 2710 delegates) must be present to have a quorum to do business. If that quorum is met, the delegates will be able to consider the recommendation that would allow for both in-person and off-site voting if delegates can see and hear what is taking place. He said that the General Conference PREXAD (President’s Executive Administrative Council) Committee will review the situation on January 7, 2021.

The meeting closed with prayer for the country during the upcoming election. “No matter what happens, this country is going to be divided down the middle, and there are going to be some very angry people,” President G. Alexander Bryant said. Help us to be a real hope and encouragement to people, to be an ear, and a helping hand to our communities, he concluded.

Photo by Pieter Damsteegt, courtesy of the NAD on Flickr.