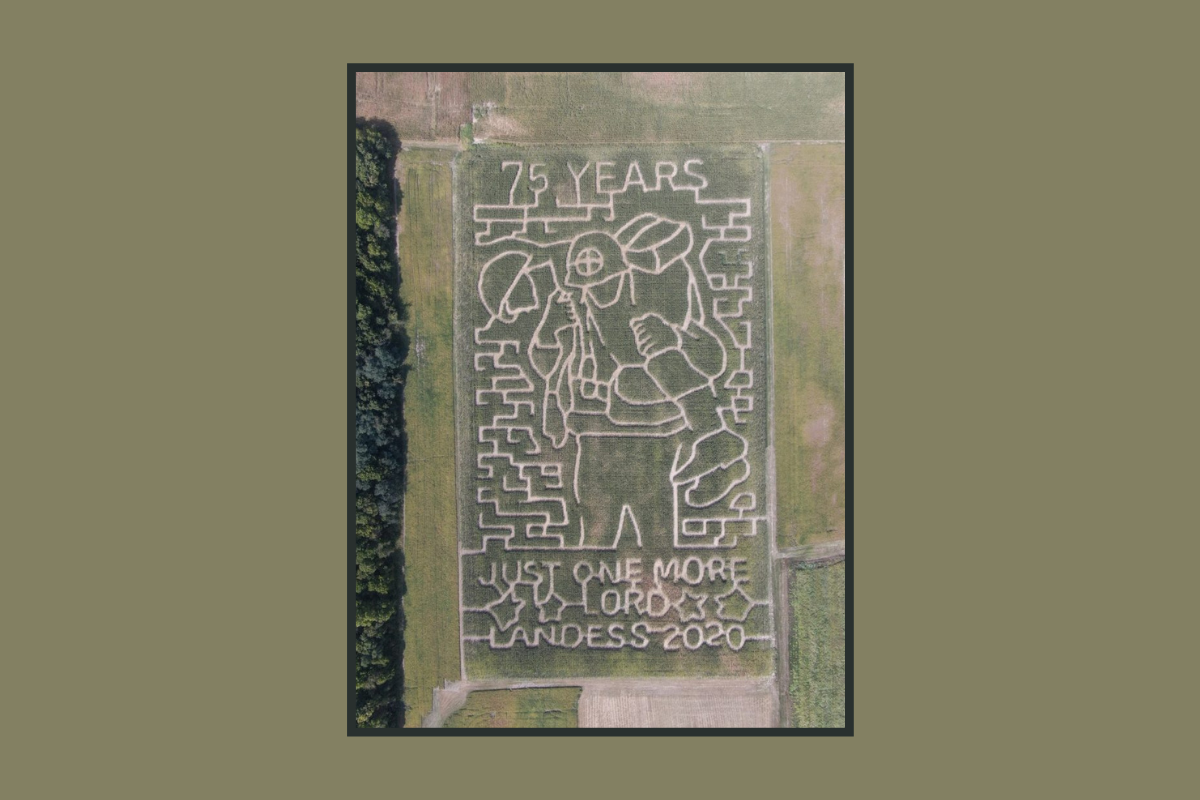 Desmond Doss Will Be Honored in Indiana Corn Maze. Congressional Medal of Honor recipient Desmond Doss will be honored in a corn maze on the Landess Farm located in Daleville, Indiana. The farm will use its annual “Fall Fun on the Farm” event as a tribute to Doss, the United States Army corporal who served as a combat medic during World War II. Because he was a Seventh-day Adventist, he refused to carry a weapon, which caused ridicule from fellow soldiers.

During the Battle of Okinawa, Doss saved 75 men, becoming the only conscientious objector to receive the Medal of Honor for his actions during the war. He was portrayed in the 2016 film Hacksaw Ridge by actor Andrew Garfield. “The courage during a life-threatening situation and his willingness to continue to go back again and again to help more men, despite prior poor treatment from his fellow soldiers due to his status as a conscientious objector, resonated with our family,” Jesse Landess, owner of Landess Farm, said in a release. From Star Press, “Landess Farm corn maze honors Medal of Honor recipient.”

New York Adventists Find Creative Fundraising Opportunity to Restore Historic Church Building. Leaders at the Seventh-day Adventist Church in Brooklyn, New York, are looking for the city’s permission to build a residential development on church property in order to fund the church’s restoration and its religious school. The church plans to partner with developer Hope Street Capital to develop a 180-unit building on the extensive park-like grounds surrounding the landmarked church — if the groups are granted approval by the Landmarks Preservation Commission. Church leaders need the money generated by the housing to continue operating the Hebron Seventh-day Adventist Bilingual School out of the historic structure. The school, which is in danger of closing, is unable to hold in-person classes during the 2020 school year because of the church’s crumbling state, said Dr. Daniel Honore, president of the Northeastern Conference of the Seventh-day Adventists.

The building was completed in 1899. “Over the years, the building has significantly deteriorated,” said Honore. Honore — whose mother was a teacher at the Bilingual School and whose father was the pastor of the Hebron Church — says that issues with the building date back decades, and there has never been enough money to properly repair it. “Back then they were constantly trying to raise funds to renovate,” he said. “You would fix one part of the building, another part went bad.” When Honore met with the church’s leaders to discuss needed repairs, they told him they needed serious resources to fix it and that “a bake sale wasn’t going to do it,” he said.

The planned development would contain rent-regulated units, 30-percent of which would be designated “below market rate,” and a mixture of one, two, three-bedroom apartments and studios, a spokesman for the developer said. A small section of the school building, which the church says was not an original part of the landmarked structure, will be demolished to make way for the apartment building. The proposed development has garnered opposition from some locals who complain that the building would block views of the historic building from Sterling Place and that a seven-story structure is too tall and modern for the historic, residential area. From Brownstoner, “Crown Heights Church Proposes Controversial Mixed-Income Housing in Landmark District.”

Seventh-day Adventists in Ghana Build and Inaugurate New Hospital. The Accra City Conference of the Seventh-day Adventists has inaugurated an ultramodern hospital to serve residents of Mallam-Gbawe, Ghana, and its environs in the Weija-Gbawe Constituency of the Greater Accra Region. The 32-bed facility offers an out-patient department (OPD), admission wards, theatre, laboratory, emergency, and pharmacy units among others and is expected to attend to about 1,000 patients on a daily basis. So far, some eight medical officers and 80 nurses have been stationed at the hospital to provide quality healthcare services to clients.

Deputy Executive Director of the Christian Health Association of Ghana (CHAG), Dr. James Duah, speaking at the inaugural ceremony, commended the church for upgrading the facility from its initial status as a clinic to its present state. According to him, the SDA church is the third largest contributor of health institutions under CHAG which aims at complementing government efforts in providing for the health needs of Ghanaians particularly in deprived areas.

Despite the increasing presence of CHAG across the country, Duah reminded members not to renege on their core mandate of offering quality health care. "CHAG owes it a duty to Ghanaians to safeguard their health. and we must be available and the first port of call in providing quality health care," he said.

"Today, Gbawe SDA Hospital stands tall among the best hospitals in the constituency, providing very high quality health care to our users," Duah stated. The Medical Director of the hospital, Dr. Francis Sey, assured attendees that staff will uphold highest standards and customer care under the new status of a fully-fledged hospital. From AllAfrica, “Ghana: SDA Hospital Inaugurated at Weija-Gbawe.”

Walla Walla University Alums Help Find and Fight Oregon Forest Fires. Walla Walla University alums Matthew Toelke (2009) and Philip Glendrange (2012) spent their summer in the skies helping to find and fight forest fires. Toelke served as an air attack pilot, coordinating aerial and ground support as well as traffic control for the fire environment. Glendrange was an aerial spotter for Butler Aircraft Company assisting the U.S. Forest Services in the Oregon Department of Forestry. The University is grateful for their service and grateful to all WWU alumni helping to save lives and property from the devastating fires. We continue to pray for those who suffered loss or displacement from the fires. From the Walla Walla University Alumni Facebook page, “Support in the Skies.”