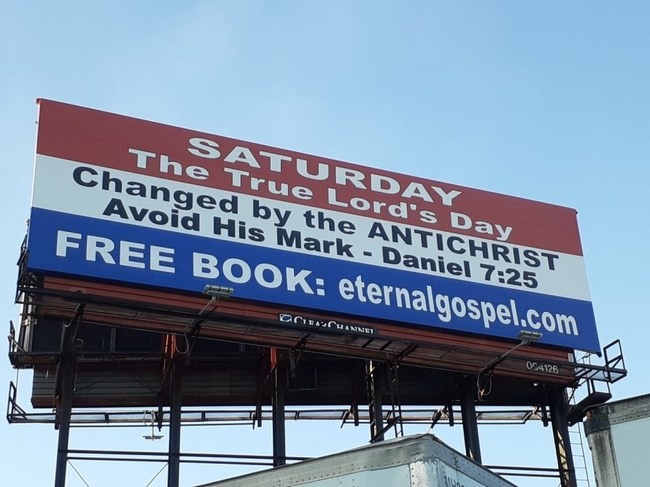 In this week’s news round-up, a church in Florida places billboard ad proclaiming Saturday as the true Sabbath at the entrance of the RNC, West African students boycott school exams scheduled for Sabbath, Michael and Lindy Chamberlain's car displayed at National Museum of Australia, and an Adventist Nigerian governor praises God for his recovery from COVID-19.

“Seventh-day Adventist Believers” from The Eternal Gospel Church in Florida Fund Billboard, Proclaiming Saturday the True Sabbath. On July 20, 2020, The Eternal Gospel Church in West Palm Beach, Florida, placed a large billboard directly in front of the entrance to the planned Republican National Convention in Jacksonville. The website, www.eternalgospel.com, describes the church as founded in 1992 "by Seventh-day Adventist believers."

Senior Pastor, Raphael Perez, explained, "This issue of making a national day of rest on Sunday is being pushed by the mainline denominations… President Trump and the people need to be warned because the violation of God's 4th commandment by forcing worship on Sunday will seriously hurt the nation and the earth according to Isaiah 24:5-6 and Revelation 14:9-12." From Cision PR Newswire, “Huge Billboard in Front of Republican National Convention Center Sparks Interest.”

Three students of the Agona Senior High Technical School recently boycotted the Asante Twi paper in the ongoing West Africa Senior School Certificate Examination (WASSCE). The students said they would rather register and write the paper in the November–December edition of the examination if it is slated for any other day apart from Saturday than flout their religious belief. In a radio interview with Accra based Asempa FM on its Eko Sii Sen talk program, one of the three students who boycotted the exam said he was standing by his faith. He insisted he will never flout his belief in keeping the Sabbath day "holy" and will not kowtow to any other thing apart from keeping Saturday as a holy day.

He said apart from the three of them who boycotted the paper in his school at Agona, other Adventist students in the same school took part in the exam. The timetable, first released by the West African Examination Council (WAEC) in January 2020 for this year's exams, did not have any paper slated for Saturday. However, due to the Coronavirus pandemic, the exams were postponed. When a revised timetable was released on July 6, 2020, it had some papers slated for Saturday. Some members of the SDA Church expressed concern about the development and argued that compelling Adventist students to write some papers on Saturday was wrong. From Graphic Online, “3 SDA students boycott WASSCE twi exam slated for Saturday.”

Michael and Lindy Chamberlain's Car Displayed at National Museum of Australia. Forty years ago, Azaria Chamberlain was taken by a dingo at Uluru in the Northern Territory. What followed was an exhaustive criminal case that divided the nation, and a miscarriage of justice that has echoed through decades of Australian history. Now the Chamberlains' family car, where police had alleged baby Azaria was murdered, is on public display in Canberra for the first time in the National Museum of Australia (NMA). The museum has hundreds of objects relating to the Azaria Chamberlain case, from the family's camping gear and memorabilia, to the car where police had alleged she was murdered. "This car is a really important symbol of the Chamberlain case," National Museum of Australia curator Sophie Jensen said. "During the second inquest… the car was essentially ripped apart in an attempt to prove that it was the location of Azaria's murder.

Michael Chamberlain, who died in 2017, always loved the Torana for its flamboyant color, its speed, and the controversial image it lent his profession as a Seventh-day Adventist minister. Once his family was cleared over Azaria's disappearance, he fought to have his pride and joy returned. It was finally returned in 1990, in pieces, and he was compensated $19,000 to finance its restoration. The finishing touch: a custom number plate that speaks of the car's critical role in a failed police case. "You can see a certain black humor in his choice of personalized number plate with '4ENSIC'," Jensen said. "But for Michael, what this car represented was a symbol of what the family had endured."

In 2014, Michael donated his proudly restored V8 to the museum. "The car represents a gross injustice, and it also symbolizes freedom as the result of the proper and independent revision of forensic science which eventually saw Lindy and I exonerated in 1988," he said at the time. The Chamberlain's Torana will be on show at the NMA for two weeks before returning to storage. "It's a little moment in time where we can all mark and reflect on the significance of this case," Jensen said. From ABC News, “Car at the centre of Azaria Chamberlain case goes on display at National Museum of Australia 40 years on.”

Adventist Nigerian Governor Praises God for His Recovery from COVID-19. Dr. Okezie Ikpeazu, Governor of Abia State in Nigeria, says he has forgiven those who wished him dead while he was receiving medical attention for COVID-19 disease. Ikpeazu who stated this at a thanksgiving service at the Eastern Nigeria Union Conference (ENUC) headquarters of the Seventh-day Adventist Church, explained that the ugly development has strengthened his faith in God. “If not for the faithfulness of God, I would have been a dead man. I thank the team of doctors whom God used to restore my health, the clergy, and the people of Abia State who supported me in prayer.”

He pledged to join hands with his Governor-colleagues from other states in completing the on-going building of the 3,000 capacity auditorium of the Seventh-day Adventist, Hill Top, before the end of the year.

Dr. Bassey Udoh, the President of ENUC described the event as an opportunity to thank God for His healing mercies upon Gov. Ikpeazu, adding that the word of God clearly states that the Lord’s faithfulness remains everlasting. From Vanguard, “COVID-19 Recovery:  I have forgiven those who wished me dead – Ikpeazu.”