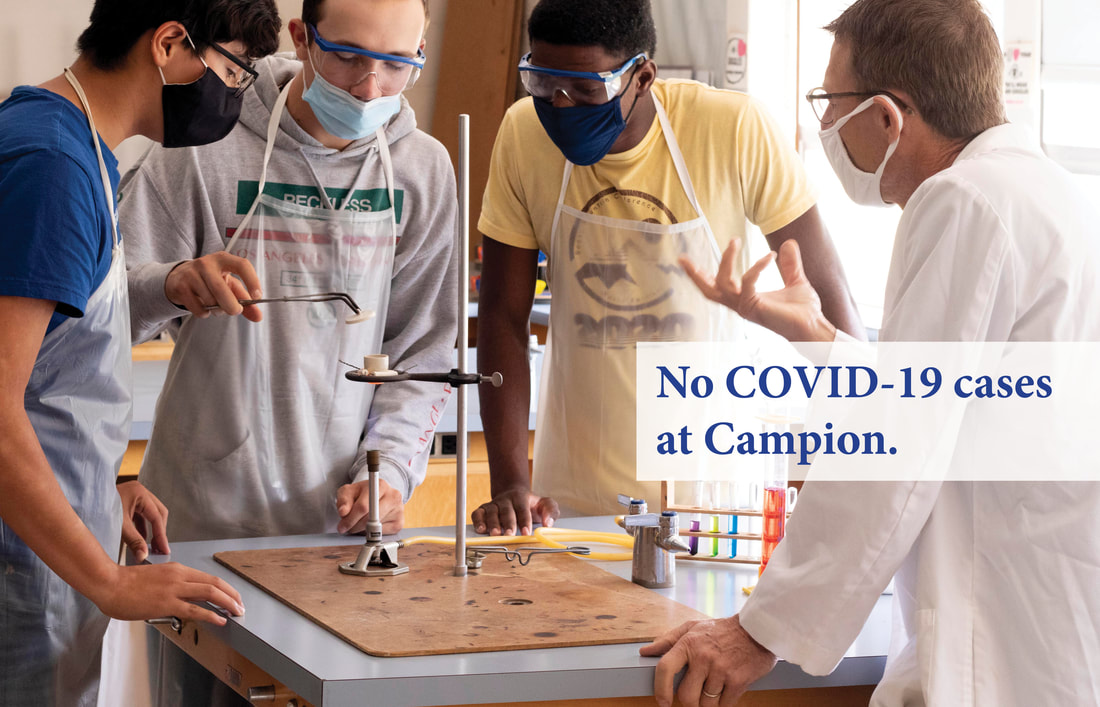 Campion Academy Completes Fall Semester COVID-19 Free. According to the Loveland Reporter-Herald, Campion Academy, a Seventh-day Adventist boarding high school south of Loveland, Colorado, is reporting a full semester of in-person education without a single case of COVID-19 even though most students live on campus in residence halls. The school kicked off its year early, on August 9, to complete the semester before Thanksgiving to reduce the potential spread of the virus on campus from students returning to school after going home for the holiday. The school has 140 students and 40 staff members.

“I am so proud of our staff, students and families,” Principal Donavan Reeder said in a press release. “It has been difficult to navigate all of the restrictions. I am amazed at the creativity of our teachers in delivering education with these challenges. Students and families have been understanding and cooperative.”

The release said school officials, led by nurse Jenny Gann, developed health and safety policies to manage the risk, including requiring masks at all times even outdoors, incorporating online options and requiring students to stay home or in their residence halls, joining classes remotely, if they had any viral symptoms.

Erin Johnson, a literature and geography teacher, said in the release that the challenge was to be creative, finding ways for students to work together without being physically close to one another. But, she added, having in-person education was “definitely” worth all the extra steps this year. “The kids value our spiritual programming and having in-person help from a teacher,” Johnson said. “Just being able to see each other’s eyes face to face is valuable. It’s hard to have that ‘ah-ha’ moment, or connection, through a screen.”

Union College Senior Nursing Students Treat COVID-19 Patients. According to the Fremont Tribune, each year, graduating nurses from Union College learn what it is like to be a working nurse through a preceptorship, during which they care for patients alongside veteran nurses in local hospitals and medical clinics. But a fall surge of the coronavirus threw Union College's senior nursing students into a crucible, giving them a unique view of a health care system under enormous strain and dedicated professionals pushed to their limits.

Lacey Axelson and Kendra Ward, part of a class of 16 who received their nurses' pins at a small, socially distanced ceremony held by the Seventh-day Adventist college last week, said the preceptorship reinforced their calling to become nurses. It also exposed the best friends to what they can expect when they join the health care workforce.

When the preceptorship started in mid-October, about 50 people were hospitalized with COVID-19 in Lincoln hospitals, according to the Lincoln-Lancaster County Health Department. By the time they completed the experience in mid-November, that number had nearly tripled. The health department reported 142 coronavirus-related hospitalizations on November 13.

According to Nicole Orian, a registered nurse and director of Union College's nursing program, this semester's students were immersed in what was essentially a long-term disaster response. "When you respond to a disaster, it's supposed to be short. You can dig deep and get the adrenaline rush to do what you need to do in the moment. But this is a trauma response that has lasted for months and months now."

While both Axelson and Ward described their experiences as being physically, mentally, and emotionally draining, they also said they gleaned valuable lessons they will carry forward with them into the workforce. Axelson said she witnessed "incredible teamwork" put forward by the nursing staff, doctors, therapists, and others assigned to care for those with COVID-19, making each shift feel more manageable.

Orian said the faculty in Union College's nursing program, who are nurses themselves with wide-ranging personal experiences, understood they were sending students directly into the maw of a national health crisis. There's no way to 100% prepare young nurses for a pandemic, she said, but the faculty tried its best to provide context and encourage students to discuss their experiences with one another.

The "small but mighty" class of graduates will be entering the workforce at a time unlike any other, she added, but they are energetic and eager to begin. "I would be lying if I didn't say they are nervous," Orian said. "But they got into this for the right reasons, which are to provide good, high-quality care to patients. They feel called to that life of service."

From Fremont Tribune, “'The reality of nursing': Union College grads preparing to join health care workforce in a pandemic.”

SDA Canadian Lawmaker Raises Election Funds by Supporting Conversion Therapy. According to LGBTQ Nation, Seventh-day Adventist Derek Sloan, the first Seventh-day Adventist ever elected in Canada, is attempting to fundraise money by signaling support for conversion therapy, instead of against it. The conservative lawmaker sent an email to supporters attempting to raise funds for his upcoming reelection bid. Sloan hopes to gather 25,000 Canadian dollars (currently more than 19,000 U.S.), citing a need to bulk up for an unscheduled election that could not happen for another three years. Sloan pleads with supporters, claiming they need him to “protect Canada’s kids” from laws such as the proposed country-wide conversion therapy ban, currently known as Bill C-6.

Without evidence, the MP claims that the law “criminalizes private conversation and — even worse — would contribute to the massive increase we are seeing with little boys and girls who are being chemically transitioned,” and that people against “gender dysphoria” should find this “alarming…. We know that the vast majority of kids who feel this way will grow out of it,” he alleges, “but [Liberals] are saying that if you try to help a child feel happy with the body they were born with, you could be guilty of ‘causing a child to undergo conversion therapy’ and be sentenced to up to 5 years in jail.” Sloan further claims that lawmakers “don’t even want to look into what could possibly be causing a skyrocketing level of gender dysphoria in the first place.”

This is not Sloan’s first anti-LGBTQ instance. He has previously tweeted that “L-G-B-T-Q is a liberal term” and his belief that homosexuality is a choice because sexual orientation remains “scientifically unclear.” Liberals, the party currently with the majority in the Canadian House of Commons, have recently petitioned the Conservative Party leaders to remove Sloan from their caucus – otherwise, they would condone his “racism, misogyny and bigotry.”

Clark had surrendered six years ago on charges of child neglect resulting in injury on top of three other misdemeanors. The school’s custodian was also charged with child abuse. In one instance, the custodian tightly handcuffed a 14-year-old student because he suspected him of “sexual misconduct” and kept him overnight in a “quarantine room.” His wrists were bloody the next day. Clark knew about incidents like this but did nothing to prevent the abuse. Clark pleaded guilty to child neglect, failure to report, and obstruction of justice, and received a six-month jail sentence along with five years of probation.

“Finally, for the first time, these former children were believed, they were heard,” [attorney Guy] D’Andrea said. “Now, they have an opportunity. With this resolution, they will finally have at least an opportunity at a new life.”