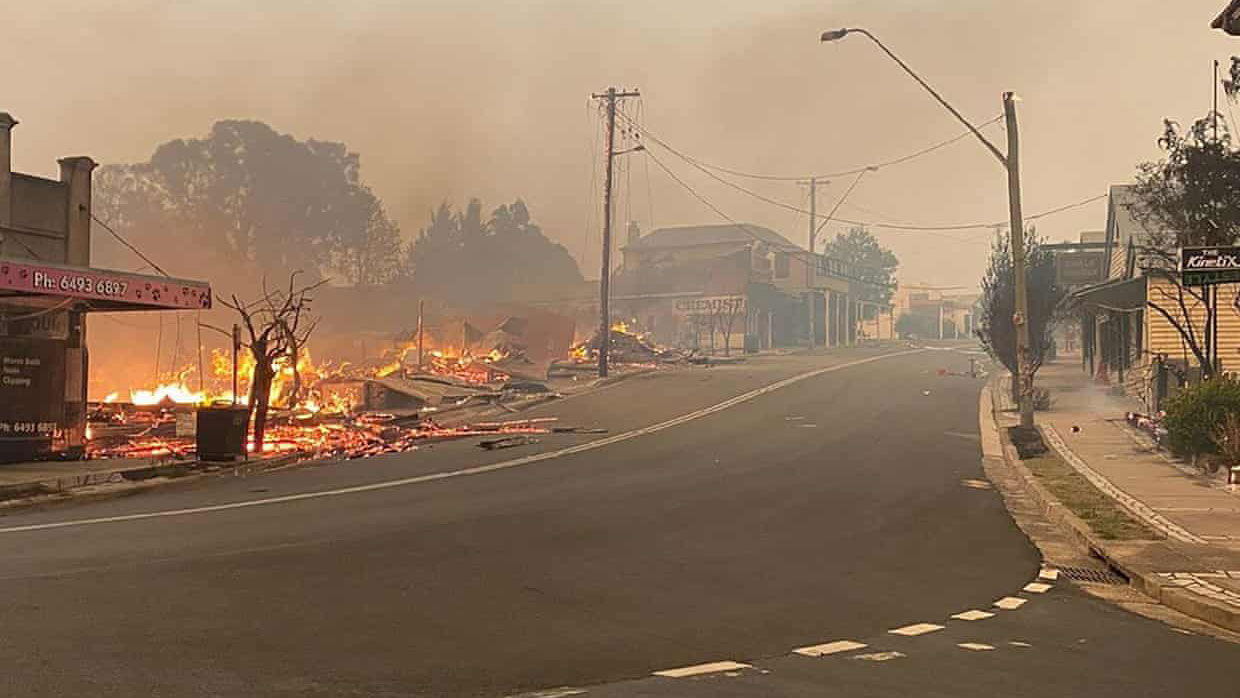 As Australia’s bushfire crisis continues, here’s an update on how Adventists have been impacted and what the Church is doing to support fire-impacted communities.

Cobargo the worst affected in NSW

Cobargo, in south-east New South Wales, has been the worst affected area in the state, with the township engulfed by fire. Seven Adventist families lost their homes, properties and businesses. The house that Cobargo church company — a total of 15 members including children — used to meet in has also been destroyed.

“The house we used to worship in is completely gone,” said Pastor Dragan Kanazir. “Homes have been lost from Wandella to as far north as Batemans Bay.” A car burned in the “fire tornado” which picked it up and dumped it more than 1km away from where it was originally parked. (Credit: Julie Nagle)

To help support the community, Bega Seventh-day Adventist Church opened their doors as an evacuation centre, accommodating more than 35 people and 15 dogs. The church hall was also used for food storage.

“When we noticed that the evacuation centre over the road was becoming overloaded we made the quick decision to open the church and allow people to use the facilities,” Pastor Kanazir said, “At one stage our church looked like Noah’s ark!”

“Other evacuation centres didn’t take pets,” South NSW ADRA director Sarina Taituave added. “We’re anticipating that there will still be people at Bega church for most of this week, but they’re reassessing at midday today.” 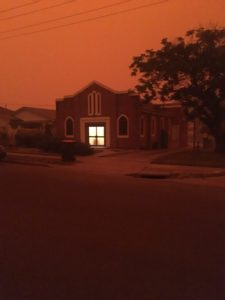 In light of the continuing crisis, ADRA is providing $A500 payments to families in need across the Conference, and $A2000 for churches helping their communities. So far, ADRA has assisted 15 families in the SNSW region.

The SNSW Conference and Australian Union Conference (AUC) are also providing cash funding to members, churches and the community based on needs, with up to $A5000 available for families who have lost their homes.

“Some [families] have lost homes, some properties or part of their properties, some are evacuated and unable to return to work, while others are volunteering for the RFS instead of working and have run out of funds,” Mrs. Taituave said.

Sense of hopelessness, encouraged by prayer

Many members from Tumut, Corryong and Tumburrumba churches (NSW) have lost their homes or have been evacuated due to the fires or smoke, according to Pastor Jeremy Taituave.

“A lot of our members who live in Batlow have lost houses; one lost a house in Tumut, but two fought to save their property and successfully did,” Pastor Taituave said. “In Corryong, [church member and Rural Fire Service volunteer] Shirley Sprenger lost 50 acres, but apparently that’s small compared to everyone else.” 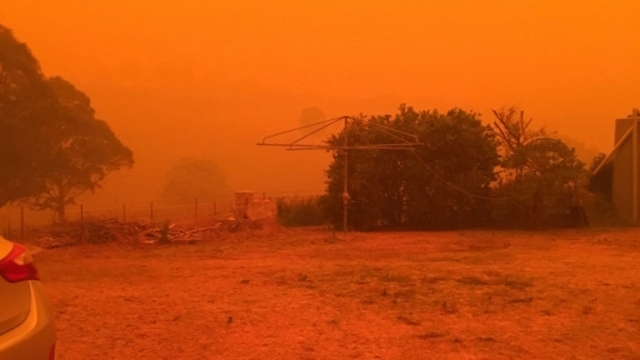 Having spoken to Mrs. Sprenger on the phone, Pastor Taituave said there is a sense of hopelessness among the rural communities and a need for fostering hope, gathering together and encouraging each other.

“We’re going to meet up with our churches, have meetings and talk about how to respond. We need to pick up the pieces emotionally and spiritually, we’re going to open our doors for prayers, and talking to Shirley, we’ve decided to run the Depression and Anxiety Recovery Program (DARP),” he said.

To support drought relief in 2019, ADRA SNSW funded DARP facilitator training for representatives from 18 churches across the Conference. The programs will be run over the months ahead to help struggling families or RFS volunteers who have suffered trauma.

Despite the sense of hopelessness, many volunteers and displaced people have been encouraged by prayer. Volunteering on the front lines, SNSW ATSIM Coordinator, Julie Nagle, has been actively sharing her faith by praying for the firefighters and volunteers who are putting their lives at risk.

“I was driving along and saw a fire truck, and had to pull up,” she said. “I walked up to [the firefighters] and said, ‘This might be a bit crazy, but I feel impressed to come and pray with you guys and your trucks.’ One bloke turned and said ‘yes please!’. I had no idea what I was going to say, but once I laid my hand on that truck, the words came: ‘In Jesus’ name, wherever these wheels travel and wherever these feet walk, may you bless their generosity and compassion.’ I’ve been doing it for each truck and they’ve been really grateful.”

Tumbarumba Adventist Church members Wayne and Sharon Ford, who own two properties in Batlow and Tumbarumba, were in the direct line of fire, twice, but managed to escape with both houses untouched.

“There were two fires. The one on Tuesday (December 31) came right up to the back door of our home, it went all around,” Mrs. Ford said. “We lost a shearing shed and some solar pumping gear. We have a tenant in the other house, and it was saved as well. We are so grateful and thankful.”

Others have not been so lucky. Many of the Fords’ neighbors whose homes escaped the first fire, were destroyed by the second blaze that came through only three days later.

“Our niece lost everything. And a girlfriend down the road survived the first fire and thought they’d be okay because the trees were burnt — but although it burnt the base, it didn’t get the canopy. So it went up in flames too,” said Mrs. Ford.

Having been evacuated from the area on Monday (December 30), it is a very emotional time for those returning to find their homes totally destroyed.

“They can’t stop thinking about what they’ve lost and what they didn’t take,” Mrs. Ford said. “When you’re told to go it’s a very emotional time deciding what to take. You do the obvious: photos, passport and business stuff, and then you walk into the lounge room and realize you can’t take much. You’ve got emotional ties to random little items and it’s hard to say goodbye.”

Despite the stress and devastation all around, Mrs. Ford said her faith has been strengthened as a result of the fires. “It’s been an opportunity to share [Jesus] with others. As a close-knit little town, people are saying ‘God be with you’ and they’re not even God-fearing people. A lot of people are asking for prayers.

“What’s been overwhelming for us are the calls from people we barely know who have offered us beds and accommodation. And even businesses have said not to worry about paying the bill. And I’m so grateful for everyone’s prayers.”

How you can help: donations needed

According to RFS volunteer Shirley Sprenger, although the overwhelming generosity of Australians is much appreciated, evacuation centres are burdened by the volume of physical items. Valuable time that could be spent fighting fires or visiting families is taken up sorting through donated supplies.

“The best way to help is to donate,” said SNSW ADRA director Sarina Taituave. “You can donate to ADRA’s disaster relief fund and the money will go straight to the fires.”

SNSW Conference president, Pastor Cristian Copaceanu, has extended his appreciation for those who have helped so far and has announced the SNSW Conference will be holding a bushfire appeal fundraising concert on January 11 at 7 p.m. in Canberra. Funds will be used for church members who have lost property and also distributed to churches in affected areas to provide to community members as needed.

“We are grateful for the prayers and support of church members around the country and want to especially thank the many local churches who have and continue to support their communities through accommodation, supplies and so much more.”

Today’s cooler temperatures and light rain have brought much-needed relief for some SNSW residents, however people are still asking for prayers.

“All of the fires have been downgraded to advice level [in the area] today,” said Pastor Taituave. “The most dangerous is about 50 kilometres south towards the Victorian border, but for now it’s much better than yesterday and people are going to inspect their houses.”

Church leaders are urging members to continue praying for Australia as the fires continue to burn across NSW and Victoria.

Cloudy with cooler temperatures in the south-east & south of #NSW with some showers. West and north still hot. Possible afternoon storms in parts of the central & north. Smoke haze in many areas reducing visibility and air quality. https://t.co/GbFNRxXk9Y #NSWRFS pic.twitter.com/SRpHEK4l1A

This article was written by Maryellen Fairfax, assistant editor for Adventist Record, and originally appeared on the Record’s website. It is reprinted here with permission.