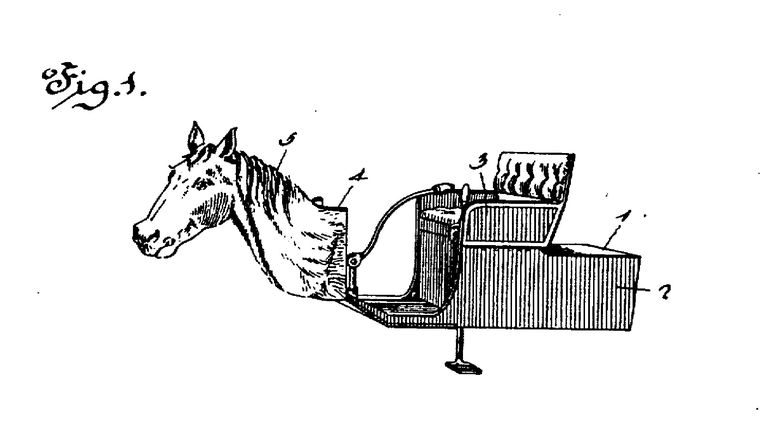 In this week’s Adventist news round-up, Uriah Smith patented drawings of the “Horsey Horseless” in 1899, the apocalyptic connotations of Prince’s “Purple Rain” are explored, Argentinian Adventist Carlos Roa explains he left sports because he thought the world’s end was imminent, and a Utah congregation raises potatoes to counter the pandemic.

SDA Pioneer Uriah Smith Envisioned Motorized Car with Fake Horse Head. On April 11, 1899, Uriah Smith patented drawings for the Horsey Horseless, an early design for an internal combustion-powered car with a fake horse head on the front. The idea was simple enough: Create a car that would not scare horses on the road. It is unclear whether any Horsey Horseless-style vehicles were built; today, it exists only in patent drawings and one vintage rendering. Smith notes, “The leading feature of the design resides in a vehicle-body provided at its front end with aforwardly-projecting figure of a horses head, the neck portion of the figure being curved on lines merging into the outline of the contiguous portion of the body…. The minor features of the design are the rectangular configuration of the body and the parts associated therewith; exclusive of the figure of the horses head…. The figure of the horse’s head is arranged in a life-like attitude and projects a material distance in advance of the dash.”

Smith was apparently something of a jack-of-all-trades; when he was not writing about Revelation, he was cooking up inventions, including an articulated prosthetic leg (Smith lost one of his own to infection). From Autoweek, “This Horse-Shaped Car Is Not (Quite) as Dumb as It Seems.”

Apocalyptic Connotations Possible in Prince’s Song “Purple Rain.” Prince was raised a Seventh-day Adventist, so it is possible that Adventist ideas about the end times influenced the writing of “Purple Rain.” What exactly does purple rain symbolize? Why would you want to see someone “dancing in the purple rain?” Prince felt the color purple symbolized the end of the world. To him, the song “Purple Rain” was about finding divine guidance during Armageddon. According to New Musical Express (NME), he said, “When there’s blood in the sky — red and blue = purple,… purple rain pertains to the end of the world and being with the one you love and letting your faith/god guide you through the purple rain.” Prince would say the apocalyptic connotations of the color purple made it his favorite color.

The apocalypse was on Prince’s mind in the 1980s. According to Alan Light of Spin, these themes became more prominent because of the decade’s arms race. The lyrics to “1999” are also about Armageddon. Prince said “1999” was designed to give people hope at the end of the world. From CheatSheet, “What Prince Said About the Meaning of 'Purple Rain'.”

Argentinian Seventh-day Adventist Carlos Roa Left Sport in 1999 Due to Prediction World Was to End. Former Argentina goalkeeper Carlos Roa has spoken about how he rejected the chance to join Manchester United — because he thought the end of the world was nigh. Roa, a devout Seventh-day Adventist, retired from ­football ­in 1999 because he believed in a prediction that the world was about to end. He told his Spanish club ­Mallorca he was hanging up his boots to ­follow his faith — just as his career was about to peak, aged 30. And although he returned to La Liga action just six months later, he was unable to recapture the form that had almost taken him to ­Manchester. He said: “At that time I was very attached to religion and bible study. It was a difficult decision to make but at the same time thoughtful — and my family agreed with me. Today, I still think that on a spiritual level it was a very good decision. But in sporting terms it wasn’t — because I left football at the best moment of my career. I could have progressed a lot, with great contracts and the ­possibility of playing in England.

Roa, now aged 50, was diagnosed with testicular cancer in 2004 after ­eventually leaving Mallorca to join second division Albacete Balompie. He won his battle for health and is now on the coaching staff of MLS side San Jose Earthquakes.

Roa was the man who knocked ­England out of the 1998 World Cup with saves from Paul Ince and David Batty when a dramatic night in St Etienne was decided by a penalty shoot-out. But he will always be ­remembered by England fans for helping beat Glenn Hoddle’s side in a World Cup last-16 game after David Beckham had been controversially sent off. From Irish Mirror, “Argentina hero Carlos Roa explains why he snubbed transfer to Sir Alex Ferguson's Man Utd.”

Utah SDA Congregations Sponsor Raise Potatoes to Counter Pandemic Effects. The Seventh-day Adventist Church of Moab, Utah, is undertaking a farm project, hoping to support local food security as the effect of the pandemic continues to affect the community, the nation, and the world. The church has procured the use of an approximately 12-acre vacant lot owned by a church member’s business partner on which they plan to grow potatoes to be distributed to anyone in need of food assistance when the crop is ready.

“The church was trying to step back from the immediate circumstances of the coronavirus and look at what sort of side effects or consequences it could have,” said Pastor Nathan James of the Seventh-day Adventist Church, explaining how his congregation came up with the project. They anticipate food supply chains being a possible concern as the pandemic drags on, so they put together a plan to bolster local food security. The project is called “Moab Manna,” named for an Old Testament Bible story in which food is providentially supplied to the Israelites during a 40-year period of wandering in the desert after they are freed from captivity. Church members see a parallel in their effort to feed their community in a time of need.

Church members have already picked up 21,000 pounds of seed potatoes from Idaho to start their crop. The group chose to focus on potatoes for ease of cultivation and their relatively long shelf life after harvest, as well as their high yield per acre. A member of Moab Seventh-day Adventist’s sister church in Castle Valley used to be a commercial potato farmer and is providing expertise on how to grow the crop. Another church member has a connection with the owner of a potato planter who is willing to lend a machine which will greatly reduce the labor of sowing each potato under the ground.

“It’s really a cooperative effort on multiple sides,” said James, expressing appreciation for the loan of land, tools, and time from various donors.

James said there are about 10 core volunteers working on the project, and the church welcomes more, whether they are church members or not. He said some non-church members have already reached out with offers to donate surplus from their personal gardens to be distributed along with the potato crop. There is more work to be done; right now, volunteers are preparing the lot for planting, removing weeds and rocks from the ground. They will soon have to install irrigation infrastructure. “If things stabilize and life resumes something like normalcy at the end of this all, then we would market the harvest to local businesses, the grocery store, restaurants and stuff like that,” James added. “But it seems like all of the indicators lean toward things being a bit more complicated. From Moab Sun News, “Feeding the people.”