The University of Newcastle, NSW, Australia

Dr. Desmond Ford’s friends were very appreciative when the Avondale College Council voted to hold his Memorial Service in the College Church. I for one was elated at this mature spirit of grace. The South Pacific Division’s belated decision to withdraw that permission dismayed many because of its pettiness and narrow mindedness. I personally was shattered at this reversal. However, by general agreement no mention of this unfortunate incident was allowed to mar the spirit of the memorial service. 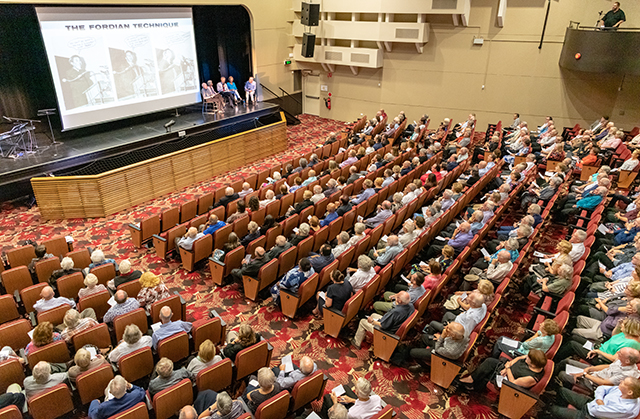 Once I entered the lecture hall and heard the beautiful music of Lyell Heise (keyboard) and Gabriel Ontanu (viola), my troubled soul was soothed. Among their selection was Des’ favorite hymn, Charles Wesley’s “Depth of mercy, can there be (Mercy still reserved for me?).” Then in the service itself the congregation of 500 or more, aided by the superb voice of Marian Moroney, sang “Amazing Grace (My Chains are Gone)” and followed it with “It is Well with My Soul.” Des’ former student, Graham Stacey, led the congregation in prayer.

The only mention of the theological issues that hovered around Des’ person during his long teaching career came in Dr. Milton Hook’s “life sketch.” He concluded that the nub of it was over a Wesleyan form of perfection in contrast to the Reformer’s stress on grace alone as the means of being made right with God. This is also the view of another former student of Des, Gerhard Pfandl, who wrote in the Adventist Review (March 15) that for Ford “Justification…is Christ’s work for us — on the cross. It happens outside of us; it is a change of status. Through justification we become children of God. Sanctification, on the other hand, is Christ’s work in us through the Holy Spirit.” He went on to say that “most Adventist scholars and pastors today have accepted Ford’s definition of righteousness by faith.”

The theme of “grace” permeated the whole service. Professor Ray Roennfeldt (President of Avondale College of Higher Education) commenced “Avondale Remembers Des Ford” with a welcome that combined pathos, humor, and tears. A panel ― moderated by Dr. Lynden Rogers and consisting of former college colleagues, Dr. Laurie Draper and Dr. Trevor Lloyd, his first student secretary, Gwen Maharaj (Ramswarup), and Joan Patrick, former Dean of Women ― gave us personal glimpses of Des during his sixteen years lecturing in the Theology Department of Avondale College [of Higher Education]. Then Dr. David Tasker, another former student and currently lecturer in Avondale Seminary, provided a vivid picture of being a student of Des’ in the 70s. 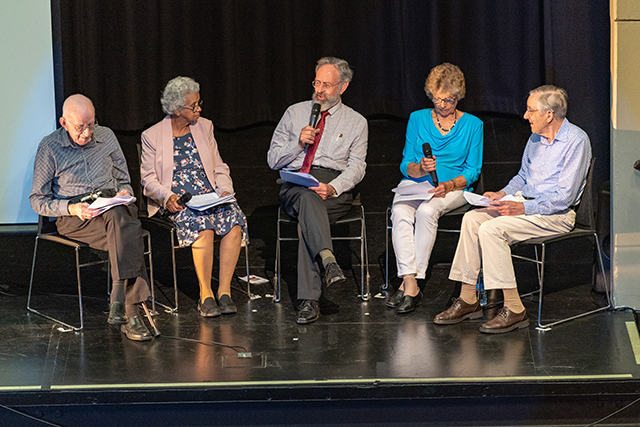 Two moving moments were Gill’s video reflection on her husband’s focus on forgiveness and Elènne’s written thoughts, read by an old friend, Lorellie Bow, about her feelings for her late father. In her conclusion Elènne opened her heart and said: “To his biographer, my father was a reformist theologian and gospel revivalist. To me, he was the sun in my solar system, my mentor, my pastor, my confidante and ‘go to person.’ His unconditional love, compassion, patience, forgiveness and sacrifice showed me Christ. His favorite Scripture was Romans 8:28–39. My father devoted his life to proclaiming the gospel of Jesus Christ, for he saw our crucified Lord and Savior as the key to life and death. I know I will see him and my mother when Christ returns. Come Lord Jesus, come.”

As a former student, colleague, and friend, I offered a homily, which I dedicated to the memory of Des, of whom I said, “though he is dead, he still speaks” (Hebrews 11:4 NASB) through his former students and all those who were overwhelmed by the gospel of the grace of God in his Son, Jesus the Christ. Des emphasized that receiving God’s gift of grace meant one received the Giver and that the resultant relationship impacted on one’s ethical behavior. The relationship was always a gift, unearned and unearnable, but it also always impacted on the values by which one lived. The congregation responded appropriately when I pointed out that the Apostle Paul was not compliant, since he added the plural form “daughters” to his quotation of 2 Samuel 7:14 in 2 Corinthians 6:18.

The theme of the homily was superbly set by Marian Moroney’s prior excellent rendition of John G. Elliott’s “Embrace the Cross,” and beautifully concluded with Dr. Robyn Priestley’s thoughtful benediction. 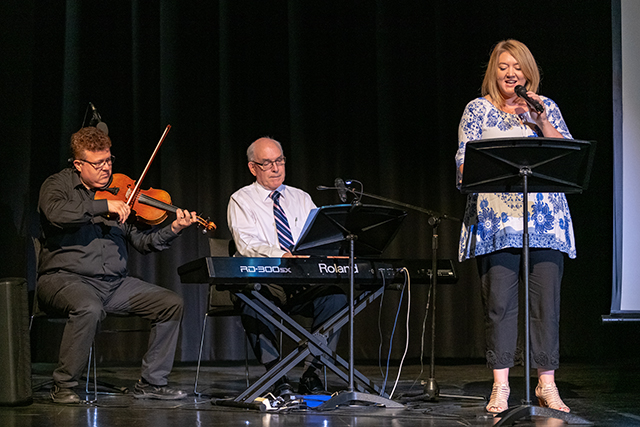 Most of those in attendance felt that Des had been given a warm, fitting, moving, and loving farewell.

Photos by Bevan Craig, courtesy of the author.