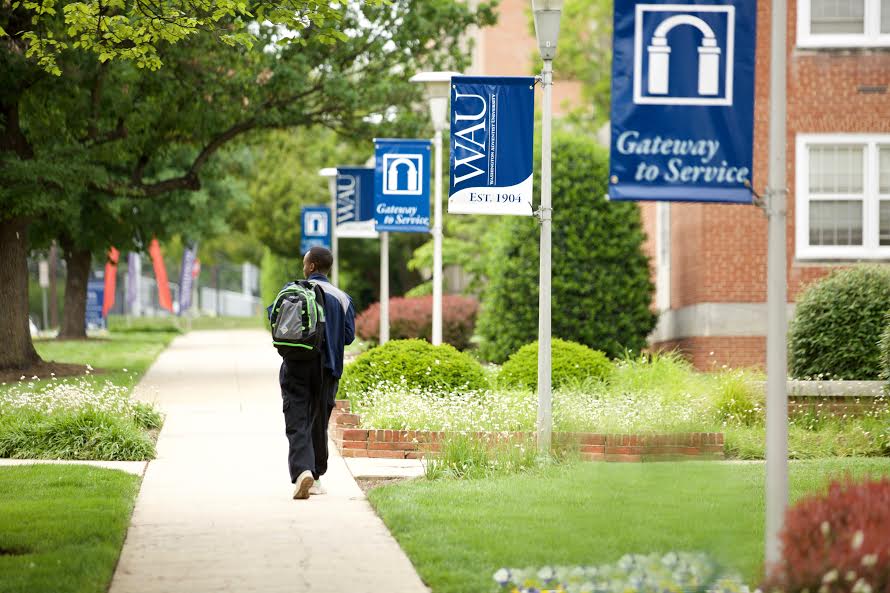 Among the many weighty matters on the agenda for the Washington Adventist University Board of Trustees at its most recent March meeting, the one concerning President Weymouth Spence did not get mentioned in the public report that was sent out following the momentous session. After noting the enrollment gain for the past year and the increase in the school’s assets, the press released announced the plan to put 15 degree programs on hold, and to release two faculty and one staff members, plus reassignment of seven additional budget positions.

The board silence about the future of the president puzzled Bethany Buckingham, who had submitted documents to the Board about alleged plagiarism by Spence, so on Wednesday, April 3, she sent all of the documents to the entire faculty. She told them, “On February 6, I emailed the attached papers to the WAU board of trustees and requested that it address the matters that I discovered and documented. Unfortunately, the board of trustees has not responded in a manner that leads me to believe it will do so. For this reason, I have decided to share my findings with the entire faculty and staff of Washington Adventist University.”

Faculty members are guessing that Bethany Buckingham is a pseudonym, since none of them know this person.

President Spence responded to the faculty immediately on Thursday morning. “I am aware that you have received an email Wednesday evening, April 3, 2019, that questioned the integrity of my doctoral degree and submissions to the Board during my 2017 comprehensive performance review,” he wrote. “Consistent with my commitment to transparent leadership, please note that my Doctorate in Education was confirmed by Nova Southeastern University (Fort Lauderdale, Florida – March 31, 1994) in accordance with the rigor of its integrity standards as essential for conferral of their terminal degrees.

“Furthermore, the documents presented for my 2017 comprehensive performance review are non-scholarly submissions and are evidence of our university’s resilient performance over the previous five years. These formal evaluations are personal, private reviews which are not meant for scholarly analysis.”

He apologized for the distraction the allegation has created for the university and pledged his commitment to fully cooperate with the WAU Board.

In response to the information from Ms. Buckingham, the WAU Board did take action, according to a spokesperson at the Columbia Union. The Board Chair was tasked with investigating the matter, and the suggestion was made to seek the counsel of an academic expert on such matters from outside of Adventism. The Board asked that the Chair provide a report to them at its next meeting May 8.

So, as the school year comes to a close, the campus awaits a report of what comes next. For the President? For their programs? For Washington Adventist University?

Bethany Buckingham’s Letter to the WAU Board of Trustees in February 2019:

Presidential Plagiarism Report Sent to Board of Trustees in February and then to WAU Faculty on April 3, 2019: 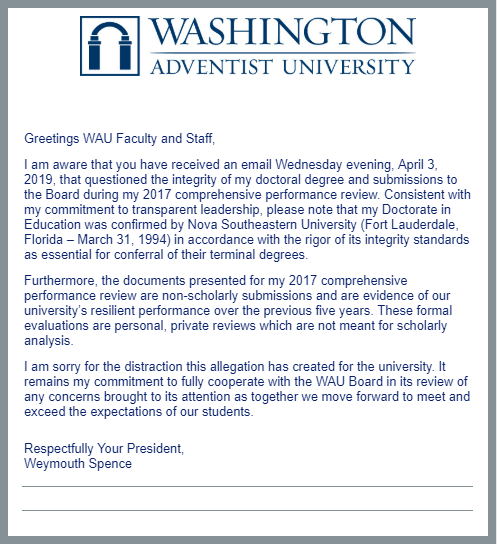