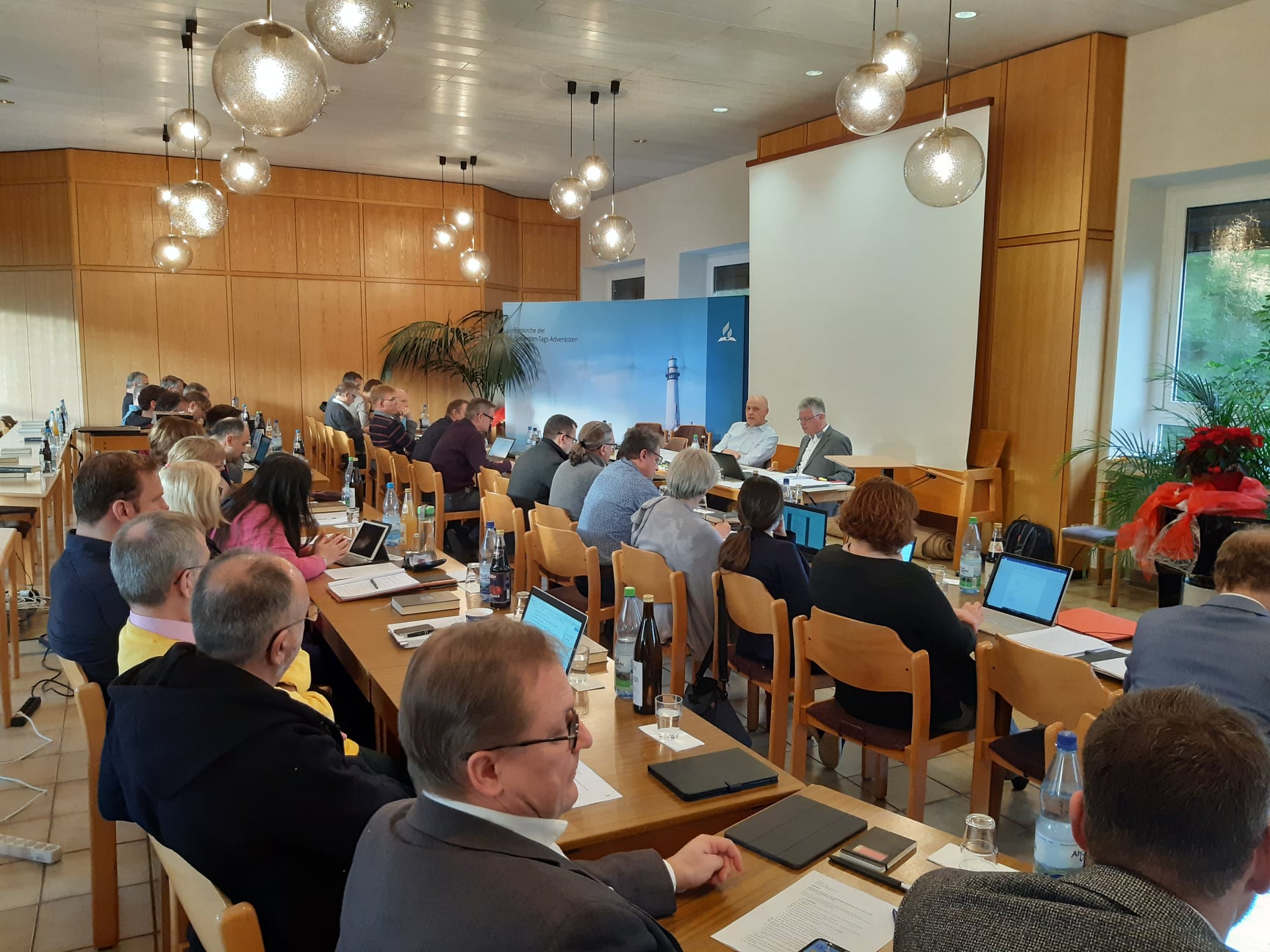 At its year-end meetings, the North German Union (NGU) Conference voted a statement and motion regarding the warning issued by the Executive Committee of the General Conference at the 2019 Annual Council. On October 15, a warning was voted toward this union, along with several others, for taking “actions that are not in harmony with Working Policy and practices on credentials.” Read more about the vote by clicking here.

The NGU leadership released a statement shortly following the vote, on October 18, which stated the Union’s belief that the warning was not justified. Since 2016, the NGU has been commissioning both men and women, rather than ordaining anyone. In its October statement, the NGU leadership said it would examine whether an objection could be raised against the warning, and that along with the Inter-European Division it would analyze the situation and agree on measures to promote unity and development. (Read the October NGU statement here.)

The most recent statement and motion, dated December 2, 2019, officially appeals the Annual Council warning for several reasons, including the fact that Working Policy allows for the commissioning of both men and women, and does not require ordination. The statement goes on to say that it “is our [the NGU Executive Committee’s] feeling that the GC officers exploited the [Annual Council] ExCom for an unjust and unspiritual process in order to demonstrate might and power.”

The full statement originally appeared in both German and English on the Union’s website. The official version in English is provided in full below:

The North German Union Conference gladly belongs to the worldwide Adventist family appearing in cultural and theological richness. We are aware that this causes tensions and, at times, pain. This experience will always be part of a worldwide family of faith. We see ourselves as people redeemed by Jesus Christ, commissioned and enabled by him to bear witness to our faith, living it in our time and place. In this, we are united with many women and men worldwide — brothers and sisters in faith.

In this awareness of solidarity, the North German Union Conference (NGU) lodges an appeal against the warning issued by the Executive Committee of the General Conference (ExCom).

- The practice of commissioning (Segnung) by the NGU moves within the limits of the Working Policy (WP). We perceive no obligation in the WP to issue pastors Ministerial Credentials, i.e., a commission to the worldwide pastoral ministry, referred to as “ordination” (WP E 05-10 [2b)]

- The NGU has obtained no document from the General Conference establishing from the text of the WP a cogent and reasonable argumentation for the necessity of ordination (Ministerial Credentials). During the ExCom session on 10-15-2019, the chair merely stated orally that the WP must be understood as regarding ordination an obligation, not an option.

In our view, the real difficulty here is the procedure and the leadership culture revealed by it, to be accounted for by the officers of the General Conference.

- Since 2012, the GC officers are acquainted with the position of the NGU regarding women’s ordination. In addition, the practice of blessing (Commissioned Minister Credential WP E-05-10 [2a]) applied by the NGU since 2016 has repeatedly been communicated through the EUD.

- The procedure voted by the GC ExCom in 2018 for settling cases of non-compliance has not been followed.2

- Neither the EUD nor the NGU have received minutes, meeting documents or other decisions of the GC Administrative Committee (AdCom) giving reasonable explanations of how and why the NGU has been put on the agenda of the ExCom.

- NGU President Johannes Naether was informed only at the beginning of the ExCom session on October 13, 2019, that a warning of the NGU was to be put on the agenda of the ExCom.

- During the ExCom session of October 15, 2019, the chair (Ted Wilson) repeatedly asserted that, in June 2019, the GC had indicated in a letter to the officers of the EUD a noncompliance of the NGU with regard to the WP. This is not in accordance with the facts, for the NGU is not mentioned in this letter.

- No information or documentation was submitted to the ExCom as basis of decision-making describing the conduct, the motives or the alleged irregularity of the NGU. The document distributed by the GC to the ExCom on October 14, 2019, merely contains one sentence: “The following entities have taken actions that are not in harmony with Working Policy and practices on credentials.”3

- In order for a committee to resolve upon a disciplinary measure against an entity, the passing on of ample and well-founded information is an essential part of a fair process. At least, the NGU document of 20164 could have been circulated at any time by the GC officers to the ExCom. Against this background, the ExCom was unable to reach a knowledgeable decision.

- The voting process also contradicted democratic and spiritual principles of a respectable procedure. There should have been no collective warning; rather, each Union should have been voted on separately.

- It is our feeling that the GC officers exploited the ExCom for an unjust and unspiritual process in order to demonstrate might and power.

- According to our view, what is described here is alarming for the entire world church, causing great harm to it as a whole. The exemplary course of action against six unions begs the question of the culture of interaction and, beyond that, of the spiritual condition of our church. Both are significantly threatened, constituting a crucial test for the church.

For these reasons and observations, the NGU strongly objects to the warning and lodges an appeal against it at the GC.

We request the GC officers to provide insight to the NGU into the process against the NGU and to disclose all relevant documents.

We encourage our world church leadership to enter into an open dialogue with the Divisions and Unions about the understanding of leadership within our worldwide church.

For the time being, the NGU will not change its practice of blessing (Segnung) in accordance with the rules of the Working Policy.

This statement, in both German and English, originally appeared on the North German Union’s website.