"Jesus and Politics" Conference Calls for Reflection and Involvement 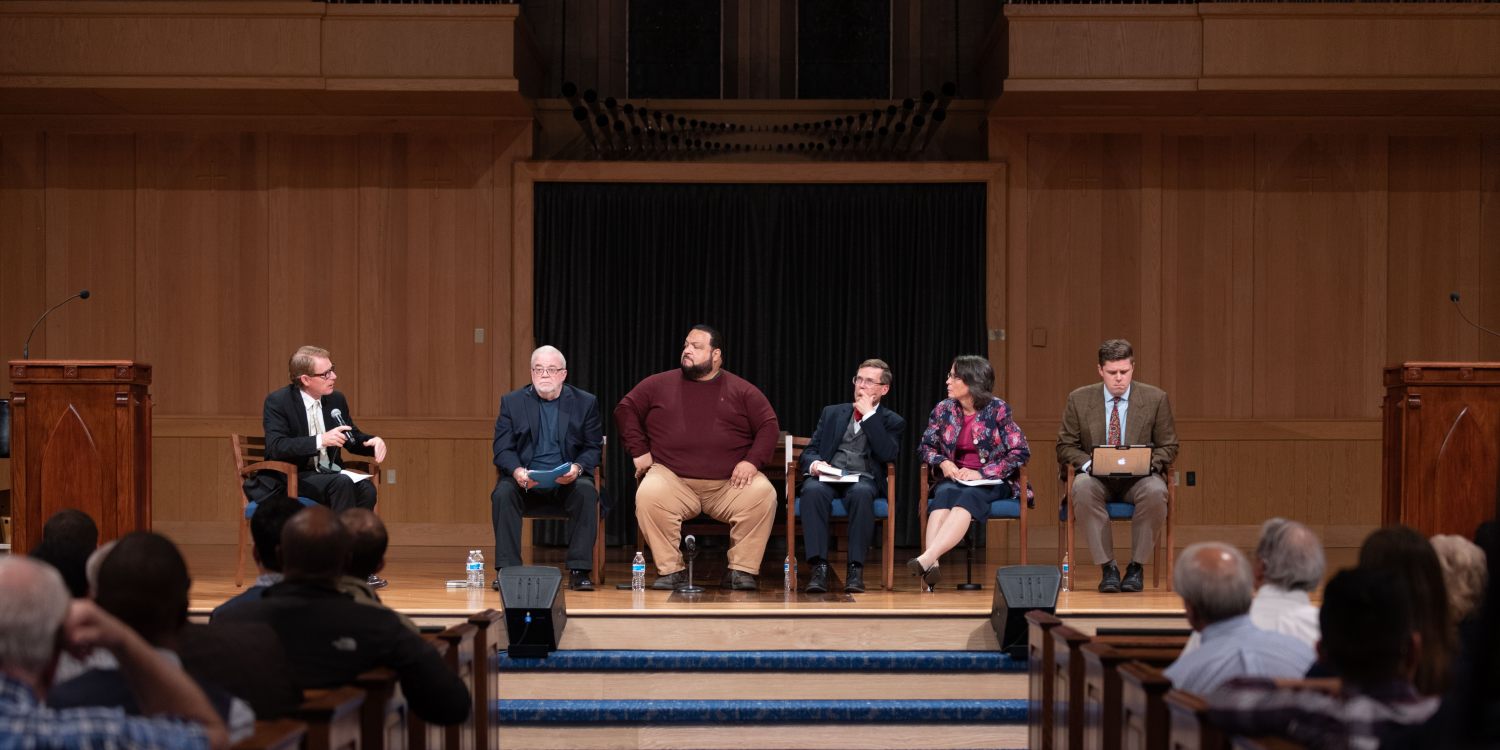 Over 100 people registered to attend the Oct. 17-19, 2019 event (some from as far away as California, Canada and Africa) and a few hundred Andrews University students also attended. The focus of the conference was how Jesus in his time on earth served the less fortunate, and how Adventists tend to avoid an involvement in politics, yet we have a duty to help others. Plenary speakers talked about our need for speaking out on issues, and panelists taught how to help in different key issues.

On Thursday, attorney James Standish spoke for the University Undergraduate Chapel, about how he takes the principles of Jesus with him into his work in law, as a church representative to government and as a government official in protecting religious freedom.

The first plenary session was open to the public and held in Pioneer Memorial Church with a good turnout. Jim Wallis, founder, president and editor-in-chief of Sojourners magazine, spoke about topics in his new book, Christ in Crisis: Why We Need to Reclaim Jesus, specifically chapter seven on the topic of Jesus’ cleansing of the temple, Romans 13, and Christ before Pilate.

Wallis told his own faith story, of growing up in Detroit and the differences between white and black in Detroit. He was told when he raised questions of race, that race was not a religious issue but a political issue and shouldn’t be discussed, so he left the church and worked on these issues (later returning). He emphasized that our religion should shape our politics, but our politics shouldn’t shape our religion. He said that the Bible has 2,000 references of the poor, and if we cut them out, the Bible is full of holes. Wallis also touched on the issues of mass incarceration, migrants and refugees, voter suppression based on race, and the need for the truth.

Friday the plenary sessions continued in the Andrews University Theological Seminary Chapel starting with a presentation by David Trim, director of Archives, Statistics and Research at the General Conference of Seventh-day Adventists, who spoke of early Adventist missionaries and their heritage of social and human rights involvement. They would not only bring the Word of God but would also teach the people trades and how to stand up to oppression.

Timothy Golden, professor of Political Science at Walla Walla University, talked about the failings of the United States on behalf of the slave/African-American through history, the Adventist heritage of engaging social issues in the name of Christ and His teachings, and that we still have more to do.

Claudia Allen, PhD Student at the University of Maryland/Content Manager for Message magazine, spoke on the history of the United States in raising up some people at the expense of people of color (including Native Americans, slaves and African-Americans).

Ronald Sider, professor emeritus at Palmer Theological Seminary, spoke twice, once in a plenary session and once for the University Vespers. He discussed that Christians should think about political issues from a biblical framework, and Jesus’ teaching on peace and violence.

The conference also partnered with Pioneer Memorial Church and One Place, both on the campus of Andrews University, to supply speakers during their services on Saturday. Edward Woods III (reading a sermon by Dr. Calvin Rock), Dr. Alvin Kibble, Dr. Ganoune Diop and Claudia Allen preaching for them.

The afternoon presenters included Michael Nixon, vice president for Diversity and Inclusion at Andrews University, who communicated that we are replaceable. We as Adventists tend to believe that it has to be us and that we can’t collaborate, but we need Christians from the outside, who are truly doing the work of anti-racism to come in and show us the way, because we are not doing it. He encouraged us to wake up, let the façade die, and be born again.

Nicholas Miller, professor of Church History at the Theological Seminary on Andrews University campus and Public Affairs and Religious Liberty director at the Lake Union Conference, talked about the lamb-like beast, having two horns — Religious Freedom & Republicanism (equality, checks and balances, etc.). Adventism can be quick to defend religious freedom but is slow to respond about the other horn.

Our Adventist founders were not silent on social issues, yet the Adventist church in Germany supported Hitler because he didn’t raise red flags about religious freedom for us, and the white members of the Adventist Church didn’t get involved in the Civil Rights Movement because it was viewed as a political movement. Miller suggested how much better it would have been to see these issues for what they were in the present time, than for the Adventist Church to have had to issue apologies years later (as they have).

There were three breakout times with panels on the topics of: 1) Jesus and the #MeToo Movement; 2) Jesus Among the Theologians & Political Scientists; 3) Jesus Among the Social Issue Activists; 4) Jesus Among the Migrant and Refugees; 5) Jesus Among the Religious Liberty Advocates; 6) Jesus Amidst the LGBT/Religious Freedom Conflict; 7) Jesus Among the Faith Activists; 8) Jesus Among the Constitutional Lawyers; 9) Jesus Among the Leaders. These panels consisted of university professors, counselors, lawyers, leaders in other denominations, workers with refugees, and leadership from the Seventh-day Adventist Church at various levels. The point of the panels was to supply more practical information, including actions that attendees could take to make a difference in their topics. We heard from a few people who said they planned to make changes right away based on what they had heard in the panels.

The weekend concluded in a moving concert “With Liberty & Justice For All,” featuring music by the Andrews University Wind Symphony, directed by Byron Graves, and readings both on the topic of the major events in the history of the United States where liberty and justice were fought and forgotten. These included historical events such as the trail of tears, the Civil War, and September 11, 2001, as well as celebrations of religious freedom, and civil rights, to name a few.

The conference was recorded and is viewable at www.jesusandpoliticstoday.org. (Plenary videos are available and breakout videos will be added as they become available.)

Janna Quetz is the Lake Union Public Affairs and Religious Liberty administrative assistant. This article was originally published by Lake Union Herald and is reprinted here with permission.