Helping the World Church to See Clearly: A Report on the Sabbath Sermon by Ella Simmons at the Adventist Society for Religious Studies

Helping the World Church to See Clearly: A Report on the Sabbath Sermon by Ella Simmons at the Adventist Society for Religious Studies 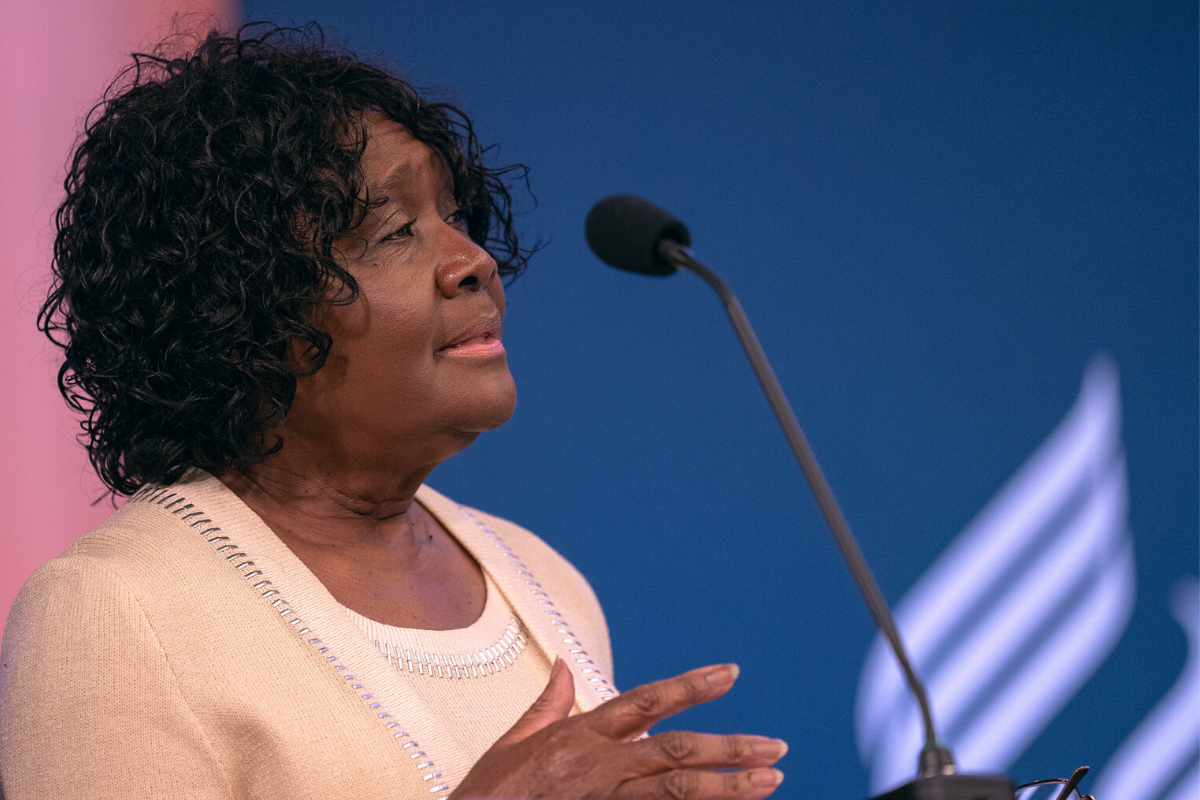 Dr. Ella Simmons, the only woman ever elected to be a vice president of the General Conference of Seventh-day Adventists, spoke to people in a packed room on November 23, 2019 during the worship hour at the Adventist Society for Religious Studies (ASRS) conference in San Diego.

With a nod to the ASRS conference theme, “1919 and Its Impact on a Century of Religious and Social Transformation,” Simmons began with humility. “My words are not inerrant or infallible or the last word on anything.” Then she moved to the proverbial elephant in the room, stating that in her view, “The 1919 Bible Conference has failed the church in many ways. Instead of launching transformational momentum, it showed a lack of courage and faith.” Rhetorically she wondered, if leaders believed God led to the conference, did they trust future Divine leadership?

Simmons made the distinction between locking a manuscript in a vault for confidentiality versus choosing to withhold new knowledge. “Can we hold what is in the back of our heads to ourselves and still be true to faith and to God?” Simmons lamented a present fear of transparent communication and anxiety related to inevitable human differences.

Moving to practical matters, Simmons reminded the audience that while Adventists were deciding what to do with issues discussed at the 1919 Bible Conference, Gandhi was preparing to lead non-violent resistance. “How do we live as religious persons? How do we imitate Christ?” Simmons stated that, for Gandhi, a virtue receives power only in its application and is no use if it serves no purpose in daily life. Simmons likes to say to doctoral students, “So what?”

Word battles back and forth in religious groups, but so what? “Keeping unity is not in the context of a denomination or leader, but of the Spirit — who we are trying to throw out.

When all is said and done, I must answer to God, not to any church.”

Simmons spoke to Adventists saying that many members don’t accept the unique denominational beliefs, and then many of those that do embrace the unique message don’t live out those beliefs. She then referred to the Mission Statement from the website of ASRS and asked, “So what?”

The Adventist Society for Religious Studies (ASRS) is a Seventh-day Adventist scholarly community whose purpose is to provide intellectual and social fellowship among its members and encourage scholarly pursuits in all religious studies disciplines, particularly with reference to the Seventh-day Adventist tradition. It was formally organized in New York City, 1979.

Simmons confessed that as she prepared to speak, an internet search had initially led her to the American Society of Retinal Specialists, and when reading the mission statement of the “other,” more well-known ASRS group, she felt an awakening of instruction from the Holy Spirit.

Simmons characterized the “other” ASRS as a group that sought to promote inclusiveness, education, research, fellowship, and service. The “other” ASRS was about “seeing” clearly. Simmons then presented a potential diagnosis: the condition of the Adventist Church is one of “retinal dysfunction.” She painted the possibility that the ASRS to whom she spoke could be the retina, the thin tissue that lines the back of the inside of the eye — near the optic nerve — that functions to receive the light on which the lens has focused. The retina converts the light to signals. Simmons said, “To Adventist scholars here, you can help the world church see. Is what you are saying worth a man’s risking his life to hear? We need you. God calls you as never before to help this church see the message clearly.”

Simmons urged scholars to guide in a trajectory from theological study to practical application. She said we have too many rules and policies, but the church needs vision and assistance in praxis. Any Adventist study should lead to transformation to a Christlike life. Quoting from Eugene Peterson’s Message Bible paraphrase, she read:

Repeat these basic essentials over and over to God’s people. Warn them before God against pious nitpicking, which chips away at the faith. It just wears everyone out. Concentrate on doing your best for God, work you won’t be ashamed of, laying out the truth plain and simple. Stay clear of pious talk that is only talk. Words are not mere words, you know. If they’re not backed by a godly life, they accumulate as poison in the soul. —2 Timothy 2:14-16

What does God expect from ASRS? Simmons said, “To be eyes to the blind.”

Referring to attrition and conflict, Simmons asked, “Are we shooting our own? Gunning down our own to maintain control? I came to the Seventh-day Adventist Church in search of truth and found it. Now, more than 50 years later, I feel caught in a crossfire in a desert spot.”

Skirting on the issue of inequality in the denomination, Simmons said,

“Words show value. No one says you are inferior but the words chosen can communicate quite clearly… I wonder, I wonder if we are all equal in Christ, how can we treat some members as second class citizens? Psychological slavery is worse than actual slavery. If you convince a person she is second class, she will believe you. If there is no backdoor, she will find one. If each member is to employ a loving ministry for the common good, how can we by ecclesiastical order approve or negate what He has bestowed?”

Simmons finished the sermon with an admonition to use one’s voice and follow one’s convictions. “You cannot be silent. Some say while Gandhi preached national unity, he wanted the rich to be trustees. Capitalists welcomed this. Gandhi neglected to speak against the caste system.” Simmons spoke to Adventist scholars, “You cannot be silent. Read critically, write conscientiously. Speak clearly. Tell your truth.”

Simmons said, “Silence is not about picking your battles, but let them pick you. Feel the tap on your shoulder. Your battle is picking you. You might as well have taken a vow of silence if you do not speak up.”

Giving those present a sense of meaning and affirmation, Simmons said, “It is imperative that you tell the straight truth. It doesn’t matter how many times your words are refuted and doors are slammed. You have been called.”