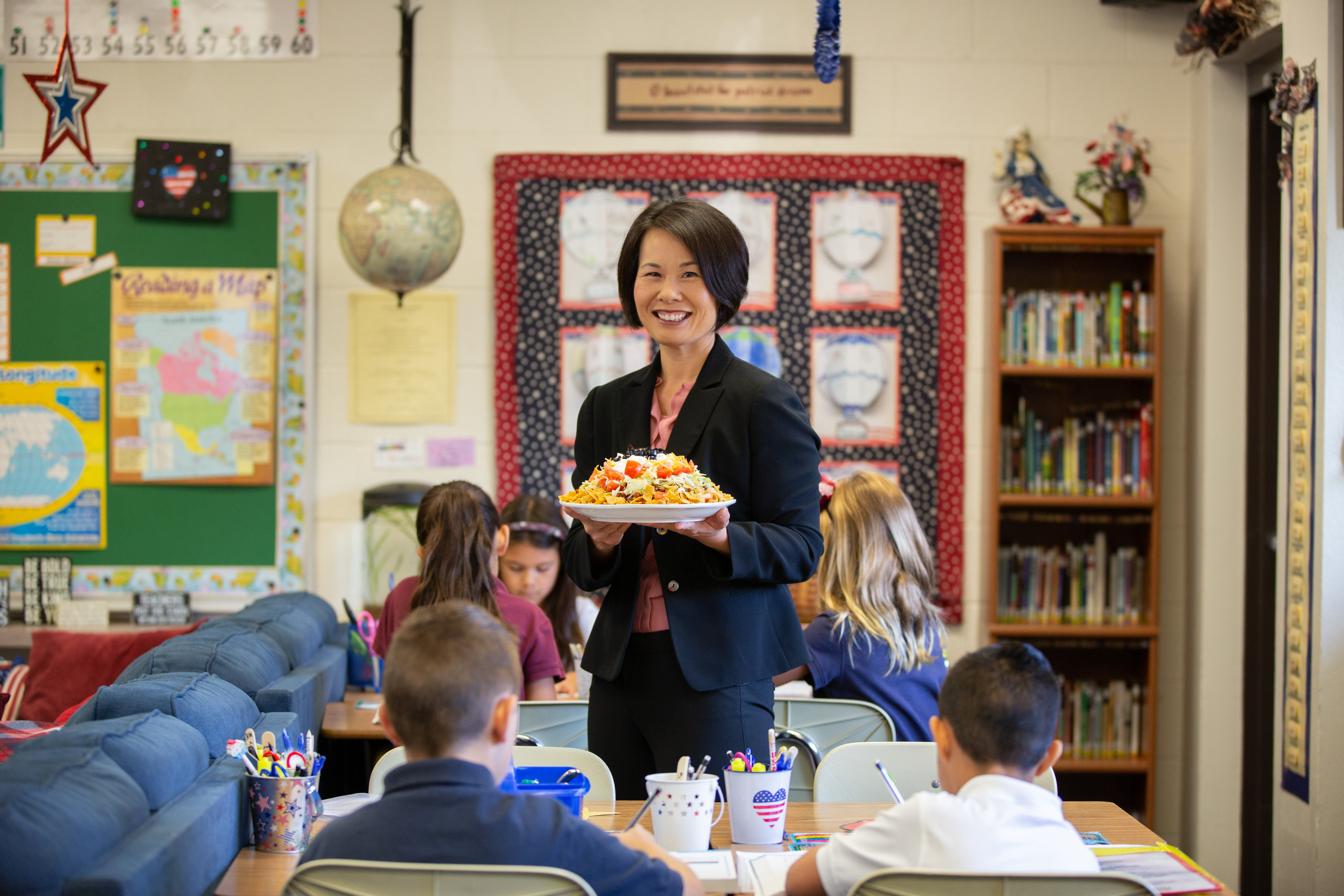 RIVERSIDE, California — Engagement watches, Saturday night Rook games, vegetarian potlucks, debates on proper construction of the “haystack” — for many Seventh-day Adventists these things are instantly familiar. But do anecdotal experiences constitute a denominational culture, and are cultural practices linked to Adventist K-12 school enrollment in America?

A doctoral study by La Sierra University Assistant Professor of Education Dr. Aimee Leukert recently produced intriguing answers to these questions through a mixed-methods approach. Initial research conducted for her dissertation at Claremont Graduate University indicates the presence of a unique Adventist culture existing across subcultural boundaries in America and further analysis based on that research shows that lifelong Seventh-day Adventists who attended Adventist K-12 schools themselves and who are middle-of-the-road traditionalists in their views of diet, dress, Sabbath preparation, and other Adventist activities are often the most willing to invest in Adventist education for their own children.

“It is a very interesting U-shaped curve,” Leukert said. “I think that the population in the middle is getting smaller,” a phenomenon that may be connected to the enrollment drop many academies have experienced over the past 20 years.

Leukert graduated in May from Claremont Graduate University with a Ph.D. She plans to share more detailed analyses and findings of her study in the future.

Leukert also serves as associate director of La Sierra’s Center for Research on Adventist K-12 Education and has worked with the North American Division’s Education Taskforce. Prior to arriving at La Sierra University, she taught at multiple levels within the Adventist K-12 system and served as administrator of a K-8 school.

As school leader she often faced frustrating questions about whether schools were doing enough to stem the ongoing enrollment fallout. The experience influenced the formation of her dissertation topic.

“My context was that we have this decline in enrollment that people have been talking about for at least two decades and I felt that as a school teacher and as a principal often the finger was pointed at the school — ‘what are you guys doing wrong?’ It was a burden on us as principals,” Leukert said. She hypothesized that since the quality and content of Adventist education has remained relatively consistent over the years, something in the Adventist culture may be at the root of parents’ decisions of whether or not to enroll their children in Adventist K-12 schools. She decided to put her theories to the test through her doctoral dissertation. “I wanted to ask them whether or not they swim on Sabbath and where they enroll their kids in school,” she said.

The first step was to determine the existence of a nation-wide, cohesive Adventist culture. She began in March and May 2018 with two sample surveys of a total 124 active church members within the eight denominational unions around the country. The first survey involved personal interviews with 61 people and after consolidation to mitigate redundancy produced 27 core statements on Adventist-centric cultural practices and beliefs such as attendance at church potlucks and game nights; avoidance of harmful drink and food; consuming a vegetarian or vegan diet; engagement of children in Pathfinders or Adventurers; belief in Ellen White as a prophetess; and the preparation for and celebration of the 24-hour Sabbath.

“Regardless of where they lived or were raised or became a baptized member of the Adventist church, the data was overwhelmingly similar,” Leukert said in an article about her research. “…there was a core set of responses that were almost identical from person to person, and to me as a person born and raised in the Adventist church, deeply, deeply familiar.”

The second survey asked another 63 people to rank-order the 27 core statements from most to least important from the perspective of their Adventist community. Leukert noted that each of the 63 participants reacted humorously to the unintended irony that the list of Adventist cultural statements totaled 27 which is the number of publicly-stated fundamental beliefs posited for many years by the Seventh-day Adventist denomination. A 28th belief was added in 2015, a fact also noted by most survey participants. “Seeing the humor in 27 items and 27 fundamental beliefs was not confined to a certain state or gender or age,” wrote Leukert.

A factor analysis of the results produced a ratio of 3.28 indicating a shared set of cultural knowledge within the U.S. population of Seventh-day Adventist church members. “With this magical number in hand, the validation of a cultural domain was confirmed,” Leukert noted in an article about her research.

During the summer of 2018 she continued the study by distributing a three-part survey through various channels around the United States and received more than 1,000 responses from participants who have children in grades K-12. The questionnaire addressed Adventist doctrine, general religiosity, and Adventist culture. The culture portion consisted of the top 14 traits or characteristics of an Adventist as determined by the second survey and turned them into questions. The final results produced the U-shaped results pertaining to school selection and cultural practices.

Adventist K-12 school enrollment figures for the eight American unions were included in the research results. The North Pacific Union Conference ranked the highest for SDA enrollment at 68.2% with 17.2% in homeschool, and 14.6% in non-Adventist schools, and the Atlantic Union Conference scored the lowest at 50% enrolled with an equal split between respondents who homeschool their children and those who send them to non-Adventist schools.

Research results also showed the significance of community — parents whose friends were largely Adventist were twice as likely to send their child to an Adventist K-12 school (64.6%) than to a non-Adventist school (33.1%).

Donna Baerg Entze a lifelong Seventh-day Adventist and vice principal for academic affairs at Monterey Bay Academy participated in the first survey. Growing up in the Monterey Bay area she recalled how her family engaged in Sabbath preparation activities each Friday afternoon by ensuring cooking and baths were done before sundown. Currently her traditional activities involve connecting with her mother and sister via Skype on Friday evening or Sabbath afternoon, and participating each Sabbath in meaningful worship with her Sabbath School class and church. A vegetarian, Entze says she has created a no-pasta zucchini ravioli that is popular at potlucks and is always down for a good Special-K loaf.

She agrees that those who attend SDA schools throughout their education are more likely to send their kids to Adventist academies. “They see that the students are able to get more than just an education,” she said, and if young people observe their parents sacrificing to provide that holistic educational experience, they will do the same with their own children. As an example, she said she is now seeing the children of former MBA students enrolling at the academy, some from Arizona.

In her observation, other factors also may have contributed to declining enrollment at boarding academies which lost students when junior day academies expanded to full high school programs, and as families became more mobile and moved around the country.

She wasn’t entirely surprised by the study outcome confirming the existence of an Adventist culture given her own experiences with Adventists in other areas of the country. “When I encountered other Adventists I just knew there were some similarities,” she said.

Leukert believes her research provides valuable insight into the changing culture of the Adventist church in the North American Division and the implications it may have on Adventist K-12 schools. “For instance, based on this data,” she says, “a better understanding and knowledge of the Adventist community surrounding each school may allow school administrators to develop a more effective marketing strategy.” 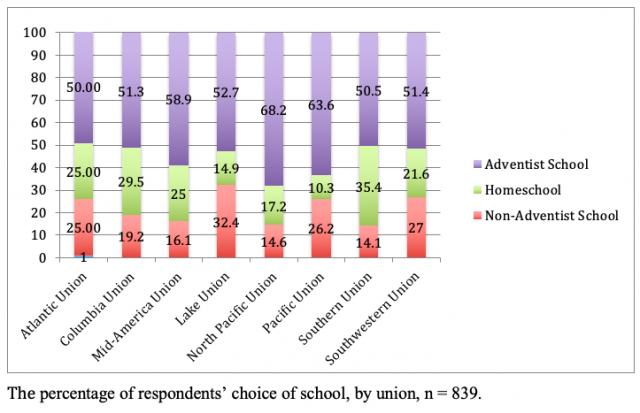 This article was written by Darla Martin Tucker and originally published by La Sierra University.