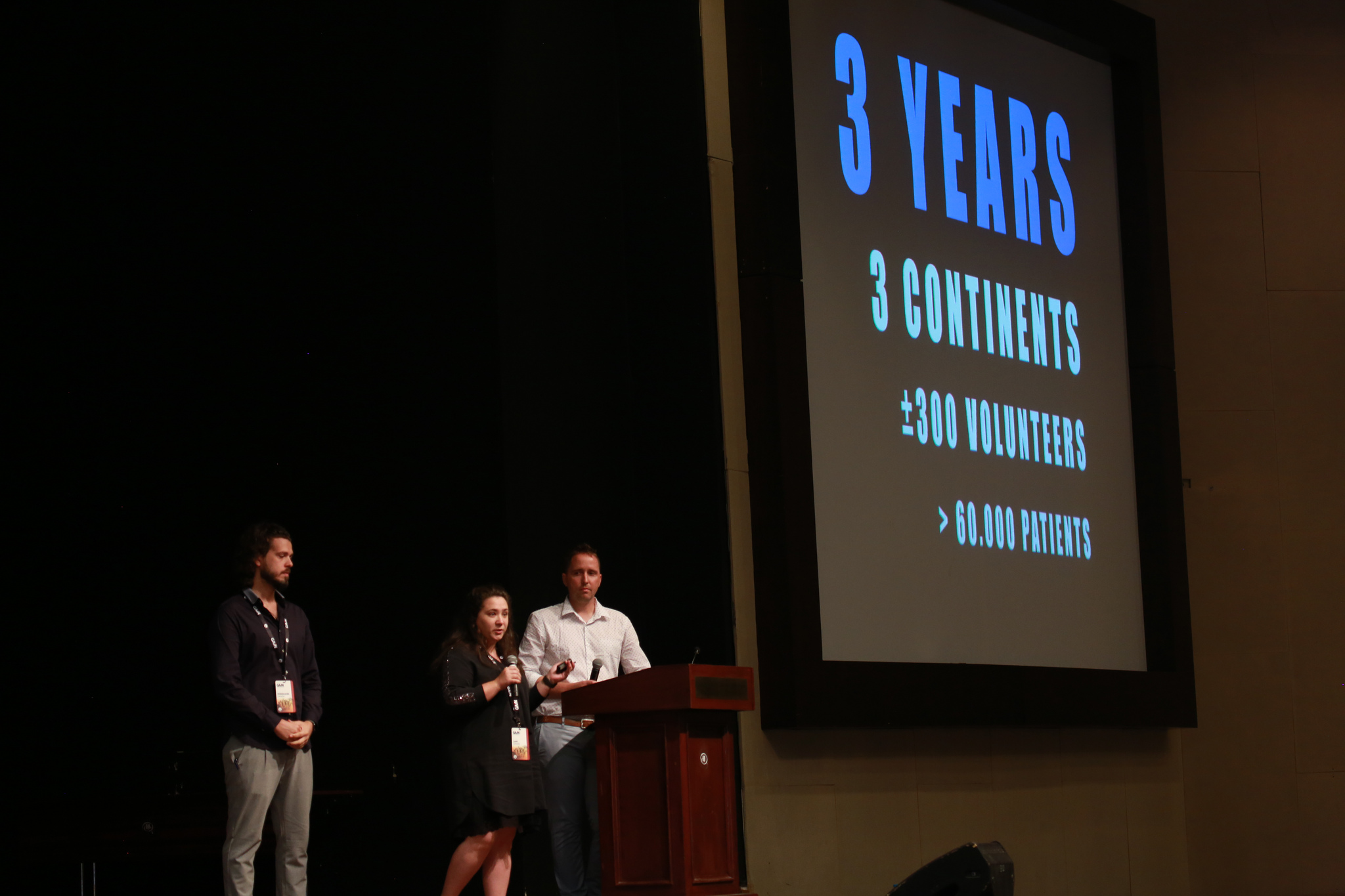 On Day 2 of the Global Adventist Internet Network (GAiN) Conference, February 26, 2019, the approximately 500 attendees learned about several Adventist organizations around the world who are fulfilling mission in a variety of ways, depending on the cultural concerns and needs in each of their areas.

Leaders from Adventist Help, a medical humanitarian initiative that often partners with the Adventist Development and Relief Agency (ADRA), discussed the projects they have been involved with since they were established in 2015. The Adventist Help team, Michael-John Von Hörsten, Hilde De Brando, and Leah De Brando, told the audience that the organization’s first project was in Greece, responding to the Syrian refugee crisis. In 2017, they established a field hospital outside of Mosul, Iraq — the only primary healthcare facility with 24/7 emergency medical care available to serve 100,000 refugees. In 2018, they went to Kyegegwa, Uganda, which is known as the rape capital of the world, to respond to the massacre that occurred, as well as the ongoing ebola crisis. In three years, Adventist Help has worked on three continents, with 300 volunteers, and treated 60,000 patients.

Next, Anees Abdelnour, who is originally from Jordan but now lives in the United States, discussed a couple of outreach activities he’s involved with, including a health expo in Jordan and a refugee ministry through the Sligo Seventh-day Adventist Church in Takoma Park, Maryland.

Raquel Arrais, associate director for Women's Ministries at the General Conference, spoke about the “Scholarshipping Our Sisters” program that is celebrating its 25th anniversary. From 1993 through 2019, $1,271,600 has been given to women through the scholarship fund who are committed to serving the Adventist Church, but can’t afford Christian education. Money is raised for the scholarship through sales of an annual devotional book put out by Women’s Ministries, as well as from direct donations which can be given online via their website.

Trans-European Division (TED) and Inter-European Division (EUD) communication directors Victor Hulbert and Corrado Cozzi shared about how they are working together in their common mission to reach the 42 countries in Europe. Currently, with a total population of 742 million, there is one Adventist per every 2,000 people. Some of the projects the TED and EUD have collaborated on include World Refugee Sabbath, the Fathers project, a documentary film on early Adventism in the British Isles, and more.

Several topics were discussed, but the one that energized the audience was about the importance of transparency in communication. Sometimes, leadership in various organizations, whether in the church or outside it, doesn’t understand this necessity, and so it falls on communication teams to be continually reminding leadership on why transparency matters and how it builds trust with those you’re communicating with. Silence shouldn’t be the default or even an option. Remember, said Jordache, you don’t want to be in a position where “everyone is telling your story except for you.”

Audience members spoke candidly about the challenges they face in balancing a job that is both public relations and journalism. Jordache responded by saying that well done PR is just that — it is a relationship with the public and it is appropriately transparent in a way that builds bridges rather than destroys.

Though there were tense moments as some attendees expressed fears and frustration with advocating for transparency to leadership, overall the mood was positive, with several individuals thanking the organizers for initiating this conversation and allowing for open and constructive dialogue on such an important issue. Jordache concluded the conversation by saying that good, transparent communication will be a benefit to the church we all love very much as we seek to create trusting relationships.

The last topic in the News Summit workshop was on the Global News Repository that the General Conference is creating. Currently they are in the initial stages of development and were seeking feedback from the workshop attendees on what questions and concerns they might have. John Beckett, director of the GC Office of Global Software and Internet, spoke to the tech side of the repository, explaining how all “Yearbook Entities” (official entities that are listed in the Adventist Yearbook) will have access and the ability to place their news stories and articles in the repository, which will then be translated into various languages and made available for other church entities around the world to easily pick up and share with their audiences with just a few clicks. This will increase efficiency for communication teams, as many times there is content that needs to be dropped into multiple locations and this will streamline the process so it only has to be dropped in once to be available to all, explained Beckett.

After the dinner break, attendees gathered for Night 2 of the “Convergence Festival,” with a viewing of the movie Libertos, a medium-length film produced by the South American Division, and partially funded by the GC, that released last year. Beautifully shot on location in the Amazon rainforest, Libertos is a modern-day retelling of Jesus’ crucifixion, and His sacrifice for humanity. In the movie, a character named Emanuel sacrifices his freedom and life to set two young women free from their kidnappers. One kidnapper asks forgiveness before Emanuel dies, while another when given the opportunity, does not. The two women escape, and are later reunited, telling others of Emanuel’s sacrifice for them.

From speaking to several audience members after the film was shown, reaction was mixed. Positives included that it was visually stunning, well-acted, and had a sweeping musical score. More neutral responses were that it was a bit too on-the-nose in terms of dialogue and plot, but was still powerful. Negative reactions included surprise at what some audience members felt was gratuitous violence toward women, as the main plot focused on sex traffickers and three kidnapped women. Though not shown, it was made clear as the plot unfolded that at least one woman was raped by the captors. She gave birth during captivity, and lived long enough to find out her baby had been sold, before she died from infection. (The other two aforementioned women escaped thanks to Emanuel.)

Perhaps unsurprisingly, the ill-fated The Record Keeper, which was officially scrapped after filming for what the Biblical Research Institute felt were creative theological liberties, but now lives again on the TheHaystack.TV, was mentioned by more than one attendee. One person remarked that it was interesting that a film featuring feminine aspects of God (the Holy Spirit was portrayed by a female actor in The Record Keeper) would receive the General Conference’s ire, while one prominently featuring violence against women should receive such praise. It’s certainly possible that some of the nuance of Libertos was lost in translation for audience members who do not speak Portuguese and had to rely on the English subtitles, which could have made the dialogue feel more stilted than it actually was. And cultural barriers should be noted, too — what resonates in Brazil may not resonate in the United States or Zambia or the Philippines, for example.

It should also be noted that as of this writing, Libertos has received almost 1 million views on YouTube, and an overwhelmingly positive response.