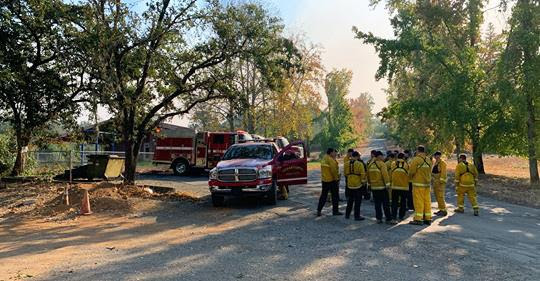 Editor’s Note: These articles appeared in the October 31, 2019 edition of Northern Lights, the weekly newsletter of the Northern California Conference of Seventh-day Adventists. They are reprinted here with permission.

People from across the country and beyond have been praying for the safety of Rio Lindo Adventist Academy as the campus was threatened by the Kincaid fire. [On October 30, 2019] Principal Victor Anderson reported: “The school is intact, and as far as we know, there was no fire damage to the school itself.” He has heard that some people will be allowed to return to the campus [October 31 or November 1].

[On October 24], although there was no evacuation order, the school sent all of the students home amid reports that the winds would shift. Over the weekend, as the fire headed toward the school, several strike teams of firefighters were stationed on the campus because it is a flat area with good visibility — a great place to mount a defense. “The fire burned within a couple of miles, but they beat it back,” said Anderson.

The school still has no power, and new safety standards require a significant amount of work to be done before electricity can be restored. If an appropriate generator can be found, Anderson hopes Rio will be able to open in the near future. “We’re thankful that the school did not suffer any fire damage, we’re thankful that everyone is safe, and we’re thankful that we know that God is going to take care of us,” he said.

[On] Sabbath, [October 26], the Healdsburg congregation was prepared to celebrate their 150th anniversary — when the Kincaid fire changed their plans.

The program for the day included a sermon by North American Division President Dan Jackson, a special lunch, and a concert by musician Tad Worku. However, during Sabbath School, members received an evacuation order on their phones. Pastor Jimmy Painter called everyone into the sanctuary, and someone suggested that the program be moved to the Santa Rosa church.

After receiving an invitation from Don Smith, Santa Rosa senior pastor, the members went home to prepare for evacuation. At noon, a number of members came to the Santa Rosa church for the celebration — complete with sermon, lunch, and concert.

The Healdsburg church was organized in early December, 1869 — “literally six years after the Adventist church itself was born,” said Painter. Healdsburg and Santa Rosa were the first Adventist churches founded west of the Rocky Mountains.

﻿Amidst the fire and stress, church members were determined to celebrate the Lord’s leading in their congregation. “Healdsburg has had a history of being faithful,” said Painter. “We were trying to maintain that legacy for the day.”

Image courtesy of the NCC.