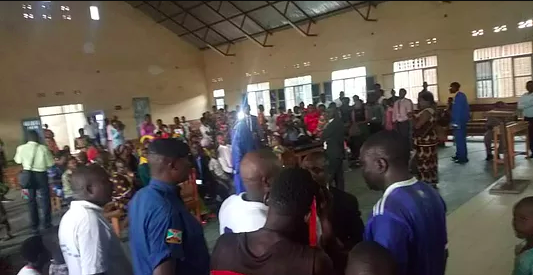 Editor’s Note: On October 17, 2019, the East-Central Africa Division of the Seventh-day Adventist Church issued an official statement on the situation in Burundi. It follows in full below:

The Bravery of a Resistant and Resilient Seventh-day Adventist Community

With the complicity of local authorities, there seems to be a systematic wave of intimidation, harassment, and even imprisonment of Seventh-day Adventists. This initiative is an attempt to coerce Seventh-day Adventists in Burundi to accept a former leader who was removed from his position.

The horrific sight of a woman being dragged on the floor of a church has gone viral on the Internet, leaving no doubt as to the intent of these oppressors and their inhumane and evil treatment of human beings created in the image of God.

These recent actions show the world the level of moral degradation fostered by government interference in the internal affairs of the Seventh-day Adventist church and the support of the prerogatives embraced by an illegitimate leader and his associates. Selected churches have been targeted for weekly raids in an effort to intimidate members. The perpetrators of this emotional and physical abuse have invalidated any claim to acting justly due to their unfair and illegal behavior.

The contravention of biblical norms has led to the the theft of church resources and the violation of the international rights of the Seventh-day Adventist members who loyally support the global Church and the decisions of a duly-assigned administrative body comprised of members from 11 countries.

While the former leader and his supporters show no restraint, church members have chosen to remain loyal to God and His legitimate Church. They have refused to surrender to the whims of an illegitimate leader who acts with impunity in an attempt to force his way into leading God’s people. Moreover, no government granted immunity can provide the legitimacy or spiritual authority required to lead God’s church. The current usurpation of prerogatives in Burundi will not succeed. Loyal Seventh-day Adventist members are determined to remain faithful to God in the face of rampant intimidation and persecution.

The Convention against Torture and other Cruel, Inhumane and Degrading Treatment or Punishment was adopted by the UN General Assembly in 1987.

In spite of this important convention, 32 years later many countries and societies still struggle to implement its provisions. While designed to produce cruelty-free environments, in too many places violence remains the rule of the day.

We hope and pray that officials entrusted with the care of the people of Burundi will act to change the course of actions perpetrated against peaceful Seventh-day Adventists believers. What is being done to men and women seeking to exercise freedom of conscience and religion is preposterous and unjustifiable.

All Seventh-day Adventist believers, and all people of good will, are called to pray in opposition to the coercion and violation of the religious freedom preventing those in Burundi from worshipping according to the dictates of their conscience. No one should suffer because of his or her choice to support the decisions of the global Seventh-day Adventist Church.

May God continue to give courage to Seventh-day Adventists who resist intimidation, threats, harassment, humiliation, beatings, and imprisonment for the cause of God.

We do hope the evil actions perpetrated by these low-level officials who have lost their way because of corruption come to a swift end. We therefore call on the national governmental authorities to address these wrongs and restore the rule of law, protecting all citizens of Burundi. We request that no individual be empowered or permitted to use the police or the authority of the state as a private force to carry out unlawful actions against peaceful, law-abiding citizens who seek to worship freely.

This statement originally appeared on the East-Central Africa Division website. Image courtesy of the ECD.