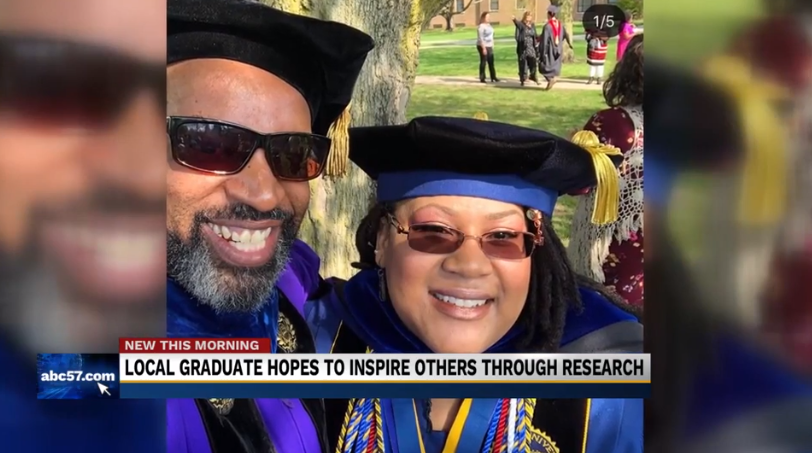 In this week’s news round-up, Andrews alumna Dr. Vivian Laughlin wins Fulbright award for her archaeology research in Israel, Papua New Guinea Adventists serve the community, an Idaho Adventist is honored for her volunteer service, a St. Louis Adventist teen organizes an event to reduce gun violence, and an Adventist Church in Utah hosts Habitat for Humanity International Day of Prayer and Action.

Andrews University Graduate Wins Prestigious Fulbright Award. Dr. Vivian Laughlin just received a prestigious Fulbright U.S. Scholar Program award from the U.S. Department of State and the J. William Fulbright Foreign Scholarship Board. She is one of eight Fulbright post-doctoral fellows in Israel. For the next two years, she’ll study the cultural appropriation of the ancient Egyptian cults of Serapis and Isis and its impact on Judea and Palestine. Laughlin earned her PhD from Andrews University in Berrien Springs in May. Each year the Fulbright program selects hundreds of U.S. citizens to teach, research, and provide expertise abroad. Recipients are chosen based on their academic and professional success and leadership skills.

“Everything comes full circle when you get the Fulbright,” said Laughlin. “Everything that you ever went through in your PhD program, from every slip and fall on a dig, from every broken wrist, for every swollen ankle, everything that has ever happened to you. It’s like it’s worth it because now you have that Fulbright.”

Laughlin is the first African-American PhD graduate from Andrews’ archaeology department and the only one to get a Fulbright. She hopes her research leaves a worldwide impact. From abc57, “Recent Andrews University graduate wins Fulbright award.”

Invited by the Sapa community, more than 180 mothers including youths and men from the Papua New Guinea Apatiko SDA church at Kamkumung and other local churches, Pilgrim, Asigusele, and Busu, spent a weekend with the Sapa villagers. They brought gifts through the church community outreach program. Apatiko Adventist Community Services assistant secretary Tonea Wagi said they did not go there as local tourists but as missionaries to help the people and share the love of God with them. “This is our outreach camp, and we traveled with our two facilitators, one is from ADRA PNG and [the] other from the Adventist Hope FM. “The Hope FM speaker gave motivational talks while an ADRA PNG representative conducted [a] survey for their water,” Kia said. She said mothers taught the villagers how to make herbal oil from moringa, baking, jam making, printings, and other income-generating activities.

“We also brought two [oil storage] tanks, one for the Toyare Primary and one for Sapa villagers, as well as cooking utensils, bush knives, and other things that we thought they needed,” she said. Kia said authorities from Morobe LLG were aware of their visit and Lae disaster office assisted with a boat. The group also received help from Huon Gulf MP Ross Seymour and is ready to fund a water supply project for the village based on a report to be provided by the mothers. From Papua New Guinea Post-Courier, “SDA Church Mothers Reach Out To Villagers.”

Idaho Adventist Honored for Giving Over 120 Volunteer Hours Every Month. Seventh-day Adventist Ronda Cheatham has officially joined the roster of hometown heroes in Blackfoot, Idaho. Cheatham is the director for the Blackfoot Community Pantry and is heavily involved in Blackfoot’s Community Dinner Table (CDT). She was honored for spending more than 120 hours of volunteer time each month making sure families and individuals with various needs in the community get healthy food through the pantry and through the CDT. “I felt blessed to represent the CDT, showing how God has blessed us and led us,” she said of the community effort, which will be starting its 12th season the last Tuesday of October. Cheatham said the community has been drawn together through the CDT, with church groups representing various denominations working together that were not working together before.

Cheatham’s deep faith is a part of what drives her to do the volunteer work that she does. She worships with fellow Adventists at the Bible Discovery Center, a short distance away from the pantry. “With the CDT, we define need in many ways because there are many kinds of need,” Chetham said. “There’s the need of time. When both parents are working, the mother might get tired of fixing meals, so it gives them a break. There are people who are all alone, so one night a week they can come and sit and visit. There’s a monetary need; there are just so many different types of need.”

“One of my main focuses over the last five years has been healthy food,” she said. “I’ve learned from my own experience that diet makes a difference in how you feel. It’s a real passion for me… I always make sure there’s fresh produce year-round at the pantry. This year, we’ve seen more people taking fresh produce. My goal is to help people be healthier.”

The Blackfoot pantry works very closely with the Idaho Food Bank, and a recent addition in reaching out to help the community has come in working with the Idaho Diaper Bank to help provide diapers to families who need them, a service which started two weeks ago. Cheatham feels she is rewarded by seeing people who have a need get the help they need to live better lives. From Bingham County Chronicle, “Ronda Cheatham joins roster of local heroes.”

St. Louis Eighteen-year-old SDA Organizes Event to Reduce Gun Violence. Skylar Robinson, an 18-year-old senior at Hazelwood West High School in Spanish Lake, Missouri, is asking other teens to join her in taking a stand against what she calls a culture of gun violence. She is spearheading an event at her church, the Tabernacle of Praise Seventh-day Adventist Church, on Saturday, September 28. “It’s called ‘Stop Talking About It and Be About It,’” Robinson said. “We have to do something about gun violence. We’re losing too many youth.” To date, 24 children in the St. Louis area have been killed by gunfire this year. “Stop Talking About It and Be About It” is designed to get teens to talk about the problem, Robinson said. While she does not have all the answers, she says one idea might be a good start. “Spread positivity. That’s all we can do because we have each other. Spread positivity. I feel like positivity is the main key of preventing all of this,” she said. The event is free and open to the public. From Fox 2 Now, “Local teen organizes event to address gun violence.”

Utah Adventist Church Hosts Habitat for Humanity International Day of Prayer and Action. Habitat for Humanity builds homes, but their members also build faith by hosting an International Day of Prayer and Action. The Habitat for Humanity event, which took place at the Provo Seventh-day Adventist Church, was planned to inspire the community to take action and to make a difference in the lives of others. Provo Seventh-day Adventist Chaplin Linda Walton said, “We work with all of the interfaith groups because we are in this together. Things like freedom of religion and freedom of speech and freedom of assembly — all those things in the Constitution are very important. If we didn’t have those, it’d be hard to do church.”

Habitat for Humanity organized this event 36 years ago to bring all faiths in the community together for an evening program of united prayer. This event specifically focused on praying for those in need of shelter, including the 2,000 homeless individuals in Utah Valley, Walton said. This event differs from previous years as it will feature the announcement of a new faith-building program called Faith Builders, partners to Utah Valley’s Habitat for Humanity.

Nancy Mickiewicz, the donor relations and development manager for the Utah Valley Habitat for Humanity, expressed her excitement and enthusiasm for this new faith-building group and said it could have a powerful impact on the lives of individuals.

She said one of the homeowners who benefitted from their work told her, “Your program restored my faith in humanity. I was ready to give up my kids to my ex and just give up.”

Mickiewicz said, “She was just crying when she told me she is just extremely grateful and so blessed. She said that her children have a better life. We changed generations for their family, and their children are now in college…and excelling. They have opportunities they would not have had, and it was all because we gave a hand up, not a handout.” From The Daily Universe, “Habitat for Humanity’s International Day of Prayer and Action inspires community to serve.”