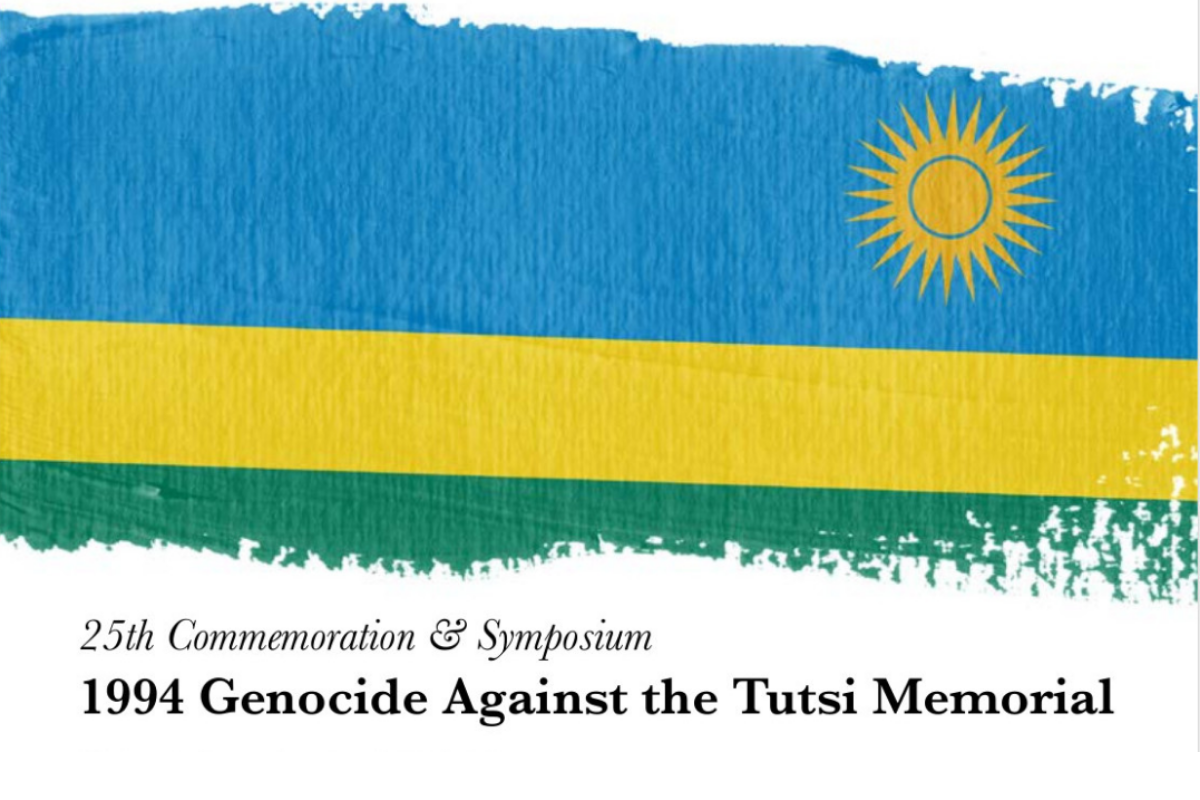 The Rwandan-American Community of the Midwest and the Peace Center for Forgiveness and Reconciliation hosted a Symposium on Genocide at the University of Notre Dame in Indiana on April 26 and 27, 2019. This year’s commemoration marks the 25th anniversary of the Genocide against the Tutsi in Rwanda when an estimated 1 million people were killed over a 100-day period from April to July 1994. Articles about Session I, “Genocide Awareness and Prevention,” and Session II, “Genocide as a Tool of Rape,” can be found here and here.

The third session of the Symposium on Genocide on Friday, April 26, dealt with the topic of “Genocide Ideology and Denial.” The first speaker, Dr. Usta Kaitesi, CEO of the Rwanda Governance Board and commissioner at the Rwanda Law Reform Commission, gave an overarching look at the topic, explaining that sometimes genocide deniers point to the fact that the specific number of deaths is unknown and say this proves it didn’t happen. This is not the case, though. “Genocide is not a crime of numbers, it is a crime of intention,” she said, reiterating the definition of genocide that was given in Session I.

Marcus Steiner, program coordinator at the Candles Holocaust Museum and Education Center in Terre Haute, Indiana, spoke next on the stages of genocide ideology. He described how the differentiations that exist in every society can lead to dichotomization and persecution. Symbols such as the Star of David or a head scarf can be used to identify classified groups and then to discriminate against them through denial of rights. These denials can be in the form of laws, customs, and/or political clout. He used the 1982 Burmese Citizenship Law that stripped the Rohingya of their citizenship in Myanmar and the Nuremberg Laws of Nazi Germany as examples.

Dr. Jean-Marie Kamatali, who also spoke during Session I, spoke to the role of scholars in genocide prevention. He began with a quote from Father Hesburgh, who served as president at the University of Notre Dame for 35 years (1952-1987):

“If our lives in education have any meaning or significance, it will be in our reading the signs of the times and in educating the young of our times in the visions and values that will civilize and make for reasonable human progress and lasting peace on earth.” —The Hesburgh Papers: Higher Values in Higher Education

When you look at the way history was taught in schools in Rwanda, said Kamatali, you can see how discrimination was indoctrinated even for young children. It was taught that the Hutu ancestors were from Chad and the Tutsi came from Ethiopia, so the idea of colonization and who was here first, created the idea of who has a right to be in Rwanda, and who has a right to rule.

Scholars can cause both harm and help in these situations, continued Kamatali. After all, it was scholars who promoted the idea of nose length as a way to classify people and differentiate between Hutu and Tutsi.

What are solutions to genocide ideology and denial? The United States is a marketplace of ideas, said Kamatali. The idea that Nazis can walk around and hold marches in public is a very American idea. Outside of the United States hate speech is punishable, genocide denial is punishable. Governments in other nations have taken these steps to prevent atrocities like the Holocaust and the Genocide from occurring again, he concluded.

The last speaker for Session III was Kelley Szany who is vice president of education and exhibitions at the Illinois Holocaust Museum & Education Center and author of the articles “Teaching the 1994 Rwandan Genocide Through Stanton’s 8 Stages” and “The Power of Story: Teaching About Genocide Through Literature Circles” in the recently released book Teaching about Genocide: Insights and Advice from Secondary Teachers and Professors, Volume I and Volume 2.

The history we teach is an awesome responsibility, began Szany. Education is the most important tool we have in making sure history is not repeated. There are two essential components in genocide education: 1) The power of story and 2) The need for the critical imagination.

Of the six million Jews and one million Tutsi killed in the genocide, each one is a story filled with the same elements, but with their own unique twists and turns, said Szany. As we move away from the genocides in Rwanda, Darfur, Myanmar, etc., we need to preserve these stories. “We need education that teaches the common humanness of the other.” We need to teach why ordinary people become perpetrators and why ordinary people resist through extraordinary acts of bravery. We must roll up our sleeves and ask challenging questions, have uncomfortable conversations.

During the Q&A that concluded Session III, a man from the US said we as Americans like our soundbites; we don’t do well with paying attention to complex stories. He asked how we can do a better job of explaining these stories as they’re happening, how we can be better educated and informed.

Kamatali responded that when human beings are being killed, our first responsibility is to protect the victims. It’s easy to see who is killing who. Protect the victims first and stop the killing. Then secondly you can begin to figure out what is happening, what caused it, how to create lasting peace.

Kaitesi added that we need to ask the real human questions. In politics, you see name calling that dehumanizes. But politics is not about death. The way politics and the media present things sometimes, the terminology they use, is as if it’s okay for some people to die. But we need to start saying no, it is never okay for someone to die a premature death. Whether we act or not, we judge. And sometimes we judge some people as not being as important as others, and this is not okay.

Steiner responded by saying that we have a responsibility to educate ourselves. We as Americans aren’t as engaged in worldly events as people in other countries are, and we as individuals need to take responsibility for our own knowledge.

Session IV looked at “Forgiveness and Unity for Sustainable Peace,” and featured three presenters who spoke briefly on this topic. Kizito Kalima, a survivor of the genocide and founder of the Peace Center for Forgiveness and Reconciliation, told the audience that forgiveness is personal, it is individual. “Why did I forgive? I forgave so I could live,” he said simply, then added, “The importance of forgiveness is the idea of freeing a prisoner and then realizing that prisoner is you.”

Amber Maze, the Holocaust education and program coordinator for the Jewish Federation of Greater Indianapolis and Candles Holocaust Museum and Education Center, spoke on strategic peacebuilding. This type of peacebuilding requires cooperation between all levels of society, and it aims to manage, mitigate, resolve, and transform central aspects of conflict. It addresses the root causes of violence and fosters reconciliation. It takes leaders from all aspects of society: governmental institutions, local authorities, civil society organizations, and the private sector.

Marcus Steiner, who also spoke during Session III, spent his time profiling several current peacemakers from different ages, backgrounds, and scopes. As long as everyone does what they can based on their unique skill sets and spheres of influence, we can build a more peaceful world, he stated.

During the Q&A that followed, the question was raised of whether you need both peacebuilding and forgiveness, or if you can have one without the other. Kalima answered that physical peace (no one shooting at each other) is very possible without forgiveness, but inner peace for individuals isn’t possible unless you forgive. Maze added that she would never tell a survivor they have to forgive; that’s an individual choice. But as a collective, if we hold onto anger, then we will continue to perpetuate harm. “Sustaining strategic peace requires an element of collective forgiveness.”

Session V was titled “Message of Hope.” Originally, Phodidas Ndamyumugabe, genocide survivor, theology professor at Weimar Institute and Adventist University of Africa, and author of the book Rwanda, Beyond Wildest Imagination, was supposed to present, but it was announced at the start of the session that he had been unable to obtain his visa in time and so could not make it.

Instead, Pastor Francois Bayingana, who was introduced as a local faith leader and educator, spoke on the topic of hope. He discussed four aspects you need for hope: faith, forgiveness, inner peace, and love. On the subject of forgiveness he said that it can be very difficult and can take a long time. After a weekend like this, and hearing testimonies, it transports you back to 1994, and you have to ask the Lord to fill you again with forgiveness. We have to go back and honor our loved ones, but we also have to move forward.