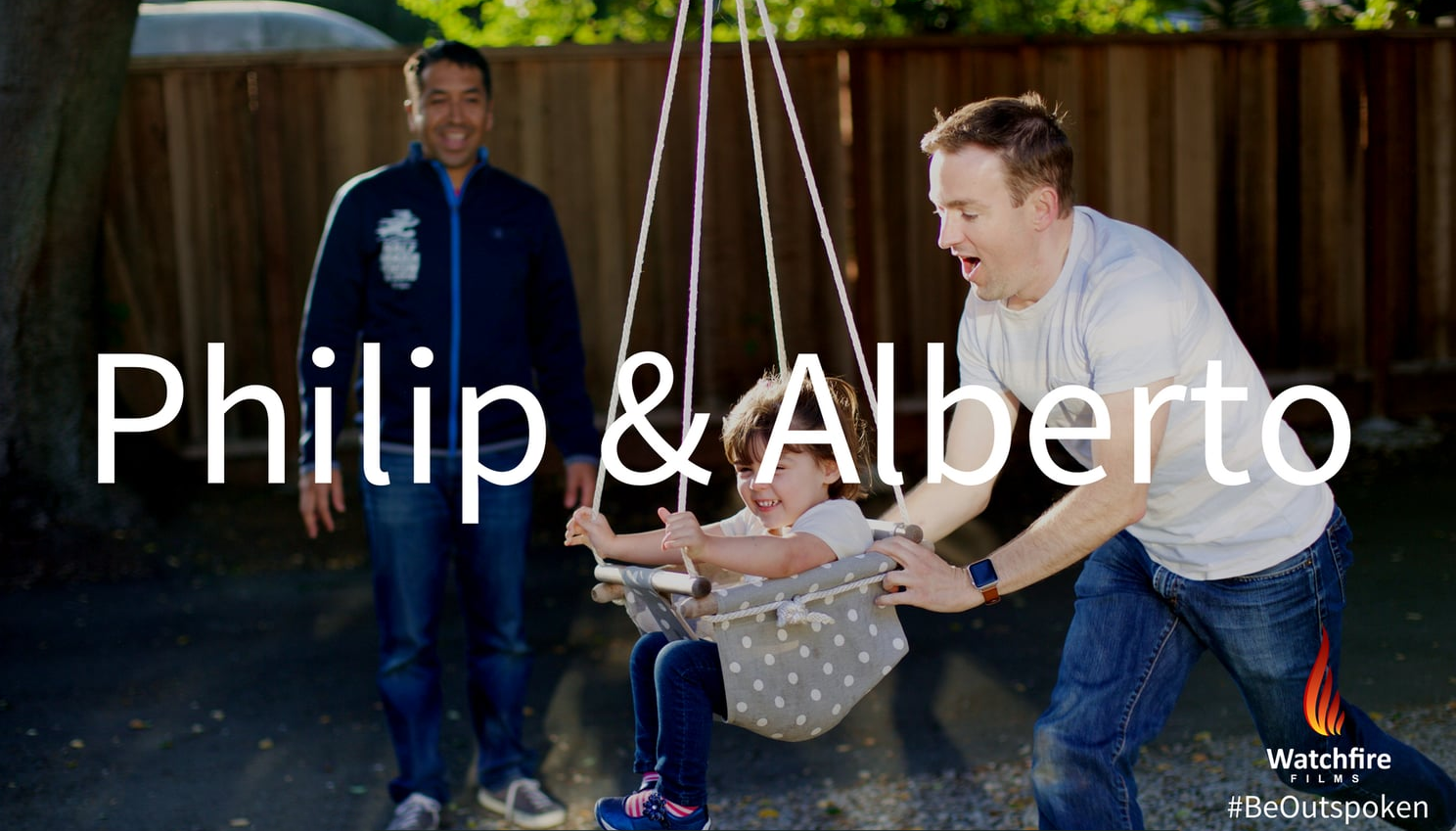 Film “Philip & Alberto” Selected for the UnLonely Project Film Festival. Stephen Eyer and Daneen Akers are pleased to announce that their film “Philip & Alberto” has been selected for the UnLonely Project film festival, sponsored by the Foundation for Art and Healing. The short film, part of the seven-part Outspoken short documentary film series, tells the story of Philip and Alberto, who are deeply committed to their faith, their church, and their daughter Dalia, whom they are raising Adventist (in the same local church that Philip grew up in) even though that is not always easy. For the past 10 years, Eyer and Akers have focused on LGBTQ rights, creating multiple films that helped mitigate homophobia in religious communities. One of those films, a feature documentary called Seventh-Gay Adventists, was an official selection at the 2013 Frameline37 San Francisco Int’l LGBT Film Festival at the Roxie Theater where the film also was asked back as part of the Frameline Encore series. From The Foundation for Art & Healing, “Philip and Alberto — Outspoken” and the Seventh-Gay Adventists Facebook page. See also: “Second Installment in Adventist LGBT+ Short Film Series ‘Outspoken’ Released Today”

Community Bikers Help Maintain Pacific Union College Bike Trails. Members of the Redwood Empire Mountain Bike Alliance (REMBA), a nonprofit composed of 350 mountain bikers from Lake, Napa, and Sonoma counties, and the St. Helena Thunderbirds, a local team of teens training in mountain bike racing, meet every second Sunday at the PUC Forest to clear debris, rebuild the trails, and share lunch afterwards. The forest has about 15 biking trails descending from the ridgeline. Debbie Bloomquist, executive director of REMBA, said her organization provides the tools for the maintenance. Bloomquist said REMBA encourages all of its members to engage in trail maintenance on a regular basis in areas in which they ride. “Trail maintenance allows riders and members of the community to see the whole of our sport rather than just mountain bikers using the trails,” said Bloomquist. She added trail maintenance teaches kids ownership over entitlement. “The kids are our future advocates. They really need and enjoy learning what it takes to make a trail work in the community.”

Briana Forgie, assistant coach and team director for the St. Helena Thunderbirds, said the group is participating because this trail network is the one where the team rides most often. In addition, giving back to the trails is an important part of the team’s philosophy. “The kids are very attached to these trails (in the PUC forest). We’ve had a great turnout from our members, and they’ve come out with positive attitudes. It’s been a great way to foster a sense of community,” said Forgie. From Napa Valley Register, “Mountain bikers clear, repair Pacific Union College forest trails.”

Australian Adventist to Serve Four-year Sentence for Sex Acts with Minor Boys. Lester Keegan, 66, former teacher in Bunbury, Australia, and member of the Seventh-day Adventist Church in the late 1970s and early 1980s, has been jailed for four years, after admitting to sexually abusing two boys — one a student and one a member of his church. Keegan was so trusted that boys would regularly attend his home for “fellowship.” But during one of those visits, between 1979 and 1983, a boy aged between five and ten years was molested as he showered, taking years to tell anyone what had happened. Several years later, after Keegan had moved to Perth, another boy, aged 13, was permitted by his parents to stay at his house on several occasions due to their shared faith. Keegan’s lawyer Seamus Rafferty said the former teacher had accepted he needed to be “punished for the sins of the past.” Judge Gillan jailed Keegan for a total of four years for indecent dealing with one boy, and acts of gross indecency on the other. He will be eligible for parole in two years. From The West Australian, “Former Bunbury teacher, church leader Lester Keegan jailed for sexually abusing boys.”