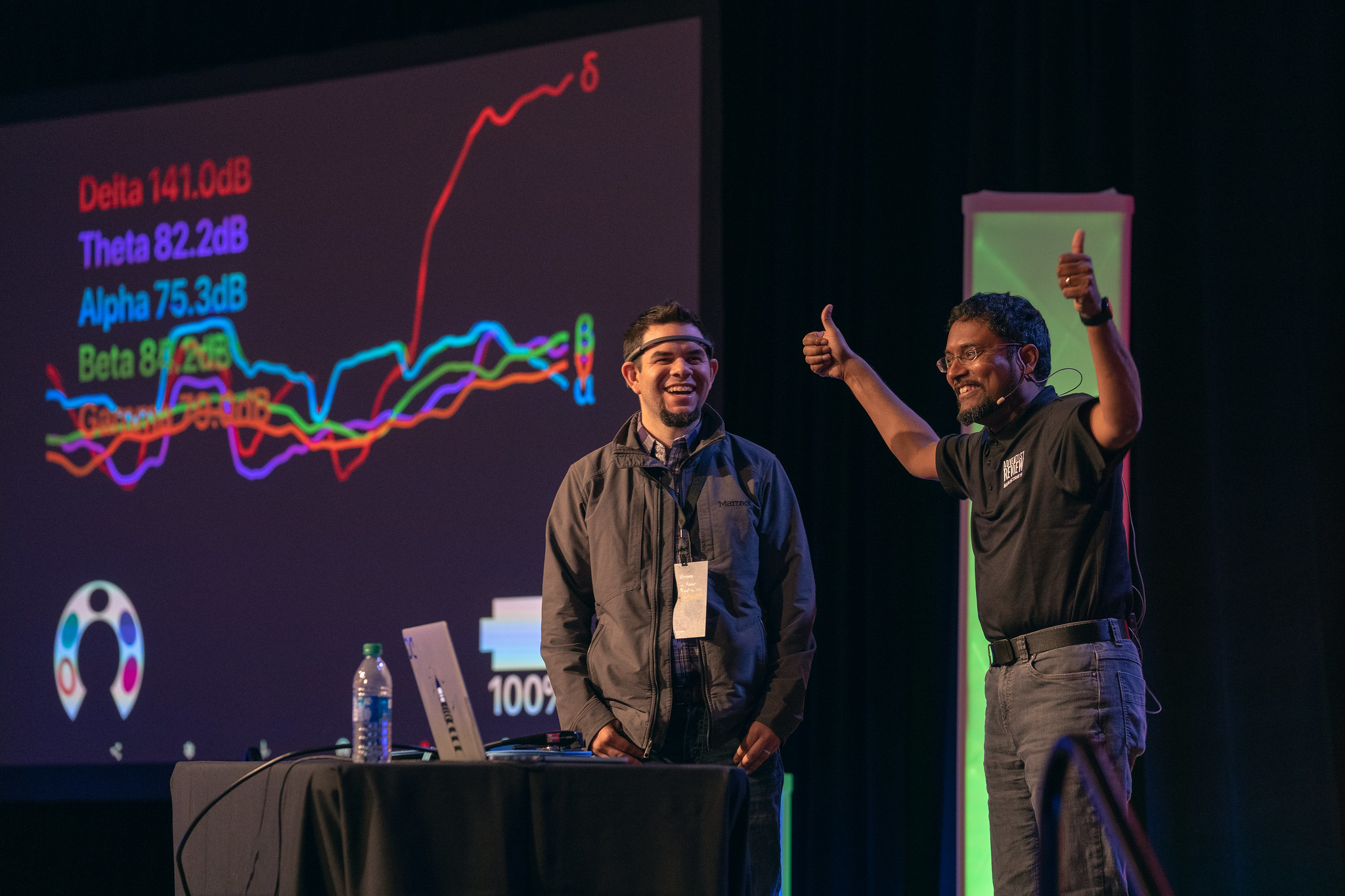 The event concluded with a communication awards banquet. At the close of the awards ceremony, Dan Weber, executive director of SAC and communication director for the North American Division (NAD), announced that the 2020 convention will be held near Chicago, Illinois.

Araya Moss, communication specialist for the communication department in the Southern California Conference, and first-time attendee, said, “Sometimes we get so focused on our own conference, and our own territory and everything, that we forget there are other people out there doing similar things in their territory. It’s nice to have this experience where we can come together, and meet different people, and see what they’re doing, and get different ideas.” Recognizing the value of the convention, Moss, who joined the conference in March after working at a public relations agency, continued, “I’ve enjoyed my first SAC experience; I look forward to going in the years to come.”

Kristen Reid, an Oakwood University sophomore from the Cayman Islands, concurred. “I really like the conference,” said the film and television major, political science and theater minor. “My expectations weren’t that high, but experiencing how the North American Division does things — this is really good — and coming out to see all these people who think like me, are in the same career as me, older and my age, and being able to connect and talk with them is a beautiful experience.”

Reid, who recently started a podcast and attended the SAC podcasting workshops and panels at the convention, added, “Communicating is telling stories, and if you can tell the stories of people around you, they can relate to that, and I think that’s beautiful.” Newmyer, whose presentation was titled “Community Response to AdventHealth Rebranding,” said, “We have three areas of focus in our plan this year, and that is sharing our story, strengthening our culture, and elevating our brand.” Newmyer focused on how the health system is using a variety of ways to elevate the AdventHealth brand, including employee training and a multi-media approach for external audiences.

“When we look to tell stories and relay stories, what are our criteria? We actually look at things like we consider our mission, vision, and values,” explained Newmyer as he shared about management and service standards for those who work for AdventHealth.

Newmyer added, “We need to be telling stories in five categories: faith-based care, clinical excellence and quality, caring for our communities, connected care, how we’re connected to each other, and whole person care. That’s what we focus on.”

Several presentations on day two of the SAC convention, starting with TechTalk with Bryant Taylor, worship and media pastor for the Azure Hills Seventh-day Adventist Church, centered around the current trending approach of DIY (Do It Yourself) communication. Taylor, along with cohost Courtney Herod, associate communication director of the Carolina Conference, showcased tech advances including Pivo turntable smartphone mount, Osmo gimbal stabilizer, and Mikme smartphone microphone. 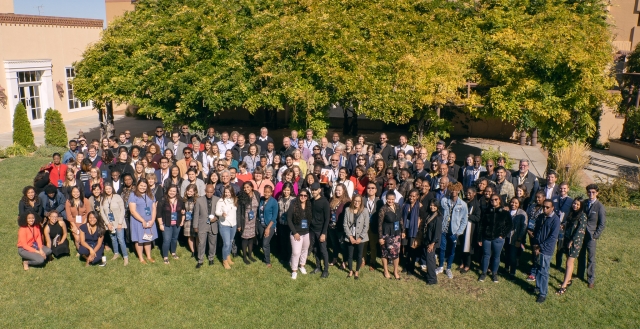 The 2019 Society of Adventist Communicators attendees pose for a photo at the Hotel Albuquerque in New Mexico. Photo by Pieter Damsteegt.

After TechTalk, Daryl Gungadoo, Adventist Review Ministries Media Lab director, launched into Friday’s keynote: “A Biblical Perspective of Innovations in Communications.” During his address, Gungadoo highlighted key innovations to help spread the Bible’s gospel message through cutting edge technology via economical means. He encouraged attendees to think creatively — and beyond the obvious. “If you’re in an industry of making curtains, do you want to define yourself as a curtain-maker; or do you want to define yourself as a light control company where, as the technology moves on, [you’re] putting liquid crystals inside glass and having a remote that turns clear glass into dark, opaque class?” he asked. “If you define yourself as just a curtain-maker, you are stuck with just making curtains, and when curtains are not in fashion anymore you’re [finished]. It’s extremely important to rebrand yourself into something much longer term… Be future-proof.”

Matthew J. Lucio, host of the Adventist History Podcast and pastor of the Peoria Seventh-day Adventist Church in Illinois, acknowledged this innovator spirit during a panel workshop on podcasting with Ryan Becker, host of the Absurdity podcast and employee of Southern Adventist University, and Kendra Arsenault, director of program operations for the Advent Next podcast. But he tempered this with advocating a team approach. “It’s too much for one person to do, but together we can hold this thing together. What I think Adventism has to say to the world is really beautiful, and there are so many ways to say it.”

The day wrapped up with a Q&A with Ken Denslow, assistant to the president of the NAD, followed by music and devotional thought by Tiago Arrais, pastor of the Santa Fe English Seventh-day Adventist Church in New Mexico.

In answer to a question about younger generations communicating our church’s message, Denslow shared that the challenge presents itself when a younger generation sees things differently than the generation that is in charge. “But that’s been true ever since this church was founded,” he said.

Denslow added, “The Holy Spirit has as much access to every other generation as it has to my generation, and to the extent that we let God be God, and lead this church, we don’t need to be so concerned about generations coming along. At the end of the day it’s not necessarily about a generation building upon what the previous generation did. It’s about every generation doing what God is calling them to do in their time.” After a Sabbath school Q&A and screening of two episodes of the NAD-sponsored Sonscreen Films production “Arnion,” and sermon by Denslow, attendees visited the Sandia Peak Tramway, climbing 10,000 feet above sea level in cable cars holding up to 45 people in each trip up and down.

“It was a real blessing to fellowship with fellow communicators in such a beautiful setting,” said Weber. “The Sabbath afternoon tour of Sandia Peak, and opportunity to make new friends and acquaintances, was a wonderful way to spend the afternoon.” 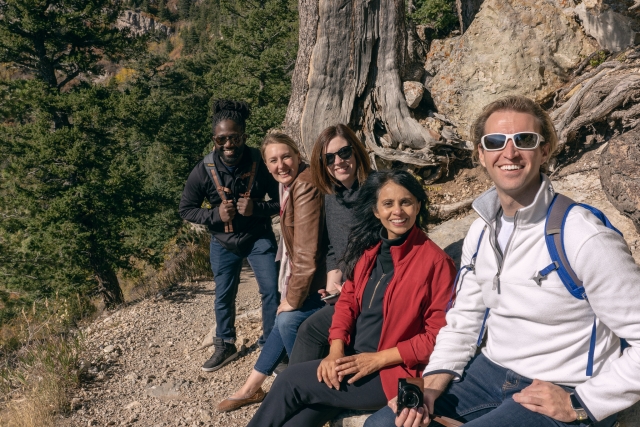 SAC convention attendees take a break after hiking a trail on Sandia Peak in New Mexico. Photo by Pieter Damsteegt.

The three-day event culminated with an awards banquet where 131 communication projects were submitted for critique. Thirty-one award certificates were distributed to both professionals and students for communication projects in several disciplines: written word/print media; spoken word (radio/podcast); video (broadcast and web); design; and campaign (advertising and promotions).

Kyle Morrison’s “Go Ye: The Board Game,” out of the North New South Wales Conference in Australia, earned the SAC Award of Excellence; the Roots magazine prototype project by Mark Baker-Sanchez and Taunyana Baker-Sanchez received the Reger Smith Cutting Edge Award. These award recipients were chosen from the best in class from each category. 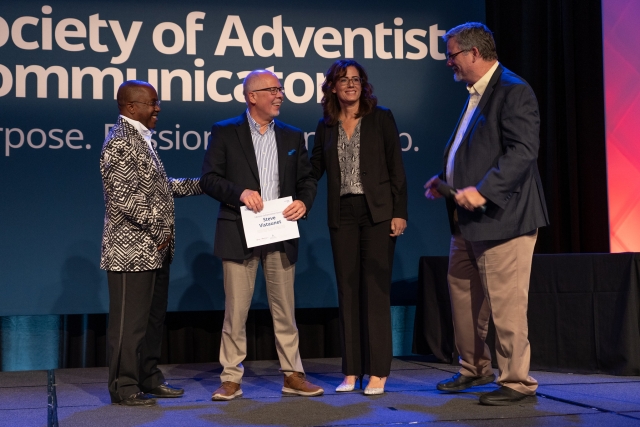 Vistaunet, who has served the church in various communication roles since the 1980s — and was once president of SAC — later described what receiving the award means to him. “I’m honored and humbled to receive this recognition, but truly this is God’s award. His blessings are at the core of every good thing that has come during my nearly 40 years of communicating the mission of our church,” said Vistaunet.

“I was especially encouraged this year to see the level of passionate excellence from young, creative entrepreneurs,” he added. “They’re going way past status quo to forge new pathways and new methods for sharing the values of Jesus beyond the walls of our church. May their tribe increase!”

Photos of the event are available on the NAD Flickr site.

This article was written by Kimberly Luste Maran and originally appeared on the North American Division website. It is reprinted here with permission.