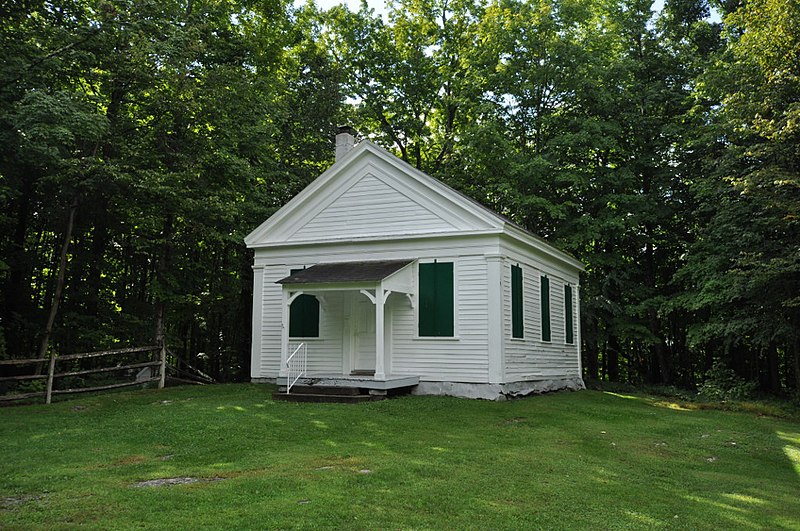 The day began cold and rainy. The beautiful New England fall colors were muted by the heavy cloud cover as the 175th anniversary celebration of the Great Disappointment, held October 17-19, 2019, began in a long white tent that stood just behind the William Miller home. Ascension Rock sat in the wet darkness just a few hundred feet away. My Doc Martens splashed in the standing water in the main aisle as I walked into the long tent, and took my seat behind the sound board. Despite the boots, my feet were soaking wet from working all day in the wet weather with the other volunteers in preparation for the event. Volunteers and participants traveled to this event, right on the border between New York and Vermont, from Maryland, Tennessee, Mississippi, and other locations across the country.

The evening program was led by Jim Nix, director of the Ellen G. White Estate, and Dr. Merlin Burt, director of the Center for Adventist Research, who alternated in regaling us with stories about old advent hymns, after each of which they led the meager assembly who had come out in the bad weather in singing them, with Rachel Kenny accompanying on the piano. I learned from Nix that the song "Heavenly Music" doesn’t just contain a message in the words, but also in the music! Each verse, ending with the words "Resounding through the air!," doesn't end on a resolving note. Instead, the way the song ends points toward a future finale with Jesus in Heaven.

By Friday morning, the sun had come out and the road back the William Miller Farm from my hotel looked completely different than it had the previous day. The reds and golds of the trees were now visible. That is, where the storm had not blown the leaves from the trees. Participants could go on a bus tour of early Adventist sites, including the Miller Graveyard, the West Haven Baptist Church, the Fair Haven Baptist Church, a Congregational Church, and the Horace Greeley House; participate in Communion in William Miller's chapel, on the property; or attend seminars on Miller and early Adventism by Dr. Burt or Dr. Jud Lake, professor of homiletics and Adventist studies and director of the Institute for the Study of Ellen White and Adventist Heritage at Southern Adventist University.

Dr. Lake spent some of the time in his seminar going through the main critics of Adventism and the Sanctuary doctrine, listing their books, and then showing the books that best defend this unique Adventist doctrine. He said that the best book on the Sanctuary is A Song for the Sanctuary by Richard M. Davidson, the J. N. Andrews Professor of Old Testament Interpretation at the Seventh-day Adventist Theological Seminary on the campus of Andrews University. At one point during the first half of his presentation, Dr. Lake leaned heavily on the pulpit and it nearly tipped forward. Catching himself, he remarked "Woah, that was Ellen White's pulpit, I almost knocked it over." It was indeed Ellen White's pulpit. Later in her life it traveled with her, and it was brought specially to this event.

Dr. Burt talked about how the Three Angels’ Messages should always be used to present the gospel and how the Sabbath has Eschatological (End Time) importance. He went on to say that "The Sabbath itself is not the Seal of God, the Holy Spirit is the Seal of God."

On Friday night, Nix and Burt again presented early Adventist hymns and the stories behind them. Dan Jackson, North American Division President, gave the homily. Since I was working sound, I placed a microphone in the audience so that the recording wouldn't just be them singing solos, but the people saw me placing the mic, and those around it just wouldn't sing! Finally, in frustration, I took the microphone back to the sound desk and sang involuntary duets with Nix and Burt so that in the recording it wouldn't sound like they were just singing solos by themselves! When I got back to my hotel room, I found myself sharing an elevator with General Conference President Ted Wilson and his wife, Nancy. As soon as I got back to my room I quickly changed into my swimsuit and rushed to the pool before it closed. In a hotel full of Adventists on a Friday night, I had the pool all to myself!

Sabbath morning began very cold. I waited until we had to leave to finish getting dressed, as I knew I would be sweltering in my long johns under my dress clothes if I wasn't able to get outside right away. Even though it was only October, I was outside on a Sabbath morning at 7:30 a.m. scraping off the rental car's windshield with a room key so that I could arrive in time to do all the necessary setup at the Miller Farm.

Sabbath school was led by Gerald Klingbeil, associate editor of Adventist Review, and his wife Chantal Klingbeil, an associate director of the Ellen G. White Estate. They each told stories about the Lord leading in their lives that went along perfectly with the sermon by Dwain Esmond, former Insight Magazine editor and an associate director of the Ellen G. White Estate. Esmond told a story to the packed tent about how a house he was trying to sell was taken over by squatters who trashed it. But miraculously, once they were out, he was able to rent it at twice his mortgage payment! His main point: "When God disappoints, it is always in the service of something great!"

On the short drive to lunch, I spotted the back of a lone robe-wearing protester at the edge of the property holding two large poster "tablets." After having a boxed lunch in the Apple Barn with the rest of the video production crew from Network 7 Media Productions, with student volunteers from Heritage Academy in Monterey Tennessee, I headed back to the main tent, to do a third sound check with Zariah Wilbur, Ambrosee Piresson, and the rest of the musical group. They lead music and provided special music for Friday night and Sabbath services. Zariah Wilbur works at the Pulse Cafe in Hadley, Massachusetts, a 100% plant-based restaurant that took over their location from a restaurant that served fresh Buffalo meat! Everyone in the group sings, but all the members also play instruments: violin, viola, and piano. While this was happening, I unfortunately missed a talk that Ted Wilson gave at Ascension Rock, without amplification.

The afternoon program featured the charismatic Kyle Allen from Adventist World Radio. He talked about projects around the world, including a mass baptism of nearly 18,000 people at one time, and about a doctor in India that can do 30 cataract surgeries per hour! He also told a heart-wrenching story about Kim, a woman who died for her faith in North Korea, and about another woman who liked to listen to Adventist World Radio while gardening. A bar was located right next to her garden, in which the bar-goers could not help but listen to the radio broadcasts loudly coming from her garden. After some time, the bar customers decided that they wanted to hear the sermons and other programming better, so they bought their own radio and listened to it in the bar! After further listening, the bar-goers decided that they needed to stop drinking, so then the bar was just for listening to Adventist World Radio, and was later simply converted into a Church! The program also highlighted many mission projects that people could become involved in.

After only a very short break, the final program of the day began, with the headline event, an inspirational sermon by GC President Ted Wilson who spoke without notes for just over an hour during which he reminded us that "everyone has talents that God intends to use." Elder Wilson lamented the need for this anniversary, saying that "I hope we don't have anymore anniversaries at the William Miller Farm!" He wrapped up by asking everyone to "join me in praying for the latter rain of the Holy Spirit" to finish the work that began with the 1844 message.

Participants left excited and encouraged, returning to their homes as far away as Austria and Tasmania. The volunteer food crew very kindly saved plates of food for us that we finally were able to eat after the three hours we spent tearing down the equipment and stage. Video recordings were made of all the programs in the main tent and should be available soon. For more information, contact Christy at Network 7 Media Productions via email at [email protected] or call 423-855-4877.

Lonny Byrd, a graduate of Southern Adventist University, lives in East Tennessee with his lovely wife and three children. When he is not working as a volunteer Audio Engineer or Musician, he does freelance Software Development.