Society of Adventist Communicators Focuses on Young Adults and Professionals

Society of Adventist Communicators Focuses on Young Adults and Professionals It’s not often I attend an Adventist conference and find myself surrounded by people my own age (and younger!), but as I looked around at the nearly 300 people in attendance at the 2018 Society of Adventist Communicators Conference, GenZ and Millennials (people in their 20s and 30s) clearly made up the vast majority. And it wasn’t just the attendees — the keynote speakers were all young adults, too.

But let me back up. The Society of Adventist Communicators (SAC) is “an organization for the professional development, continuing education, recognition, networking, and nurturing of Christians with careers in communication.”1 The conference is geared toward both college students and communication professionals, who spend three days learning about the ins and outs of the communications world, networking, and gaining/enhancing their skill set.

The 2018 SAC Conference, held this year at the North American Division headquarters in Columbia, Maryland from October 18-20, 2018, kicked off on Thursday with media tours of a Baltimore TV station, an NPR station, Newseum, and the National Geographic museum.

David Banks, Chief Strategy Officer of Adventist Health System gave the opening remarks Thursday evening, followed by a special address from NAD President Dan Jackson, who discussed the recent Annual Council vote on the compliance document. Unfortunately, my flight schedule prevented me from attending this first day, but Jackson’s remarks were all anyone could talk about when I arrived Friday morning.

For many of the college-age students in the room, this was their first time interacting with President Jackson, who is known for his “dad jokes,” candor, and good humor. Several attendees expressed appreciation for Jackson’s willingness to discuss the vote with frankness and honesty, and his engagement with attendees’ questions. Many of the questions focused on their disappointment with how the vote had gone and asked, “what happens now?” Jackson told the audience that “the North American Division is absolutely undeterred to see its goal of 1,000 women pastors serving in North America. We will not stop.”3 (This sentiment reiterated the official statement released by the NAD following the Annual Council vote.)

General Conference President Ted Wilson’s Annual Council Sabbath sermon, which set off a firestorm on social media, was also a topic of discussion. Wilson, who had railed against several things, included becoming “distracted” by social justice issues in his list of don’ts, which didn’t sit well with many young people. Wilson did end up walking back his statements a few days later after a meeting with regional conference leadership who expressed their disappointment in his remarks,2 but discussions surrounding his sermon continue.

President Jackson reaffirmed the NAD’s commitment to social justice, telling the SAC audience, “social justice IS the gospel” and to “touch your world for God.” 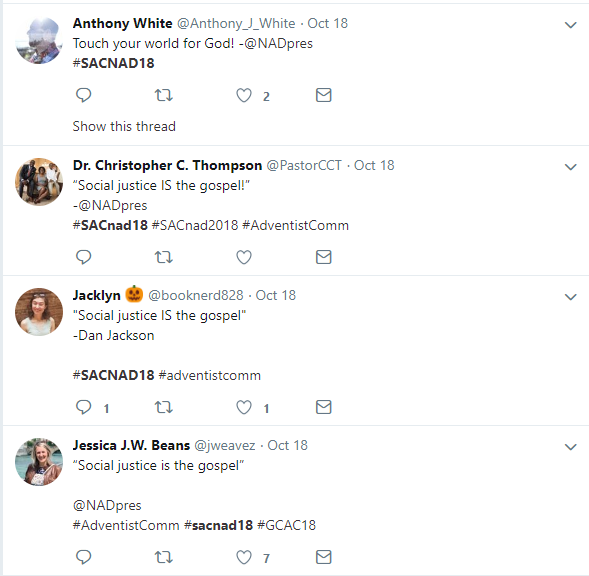 In addition to listening to the buzz surrounding Jackson’s Thursday evening address, I spent Friday attending a “TechTalk,” the keynote addresses, and several afternoon workshops. Dan Weber, NAD communications director and SAC executive director, told the audience that they usually bring in a well-known speaker for the keynote but decided to try something different this time. Instead of a presentation by a big name, attendees were treated to four back-to-back 15-minute presentations by young people doing big things in the church:

Kaleb Eisele who runs Humans of Adventism, which “seeks to explore and showcase the variety of people sharing the Adventist faith.”4 Inspired by the wildly successful “Humans of New York” Facebook page, Humans of Adventism launched less than two years ago and now has over 4,000 followers.

Erica Jones, who is assistant director of women’s ministries for the NAD and started the blog Gorgeous2God, which launched in 2017 and answers questions from girls and young women on real life issues including faith, dating and relationships, abuse, mental health, bullying, and more.

Justin Khoe, whose YouTube channel That Christian Vlogger has almost 70,000 followers. Khoe describes himself as a “digital missionary,” and along with cohost and wife Emily, “aim to equip young adults to have a stronger and deeper relationship with God and to help them discover who God has created them to be.”5 New videos are posted each week.

Emily Long, who founded 71.5, a youth culture magazine funded by the Georgia-Cumberland Conference.

Sabbath began with a morning church service, and then attendees grabbed box lunches and headed out to the Museum of the Bible for the afternoon. I’ve been curious about the museum ever since writing about the controversy surrounding its acquisition process.6 The $500 million, eight-story, 430,000 square foot museum is centrally located in Washington D.C., just a few blocks away from the Capitol Building. Funded by the Green family, who is best known for their chain of Hobby Lobby stores, the museum was charged with illegally importing artifacts back in 2017. There were also questions on the provenance of its 13 Dead Sea Scroll fragments, which museum officials originally claimed were all authentic, but left experts dubious. A couple days after my visit, CNN reported that the museum now admits at least five of the 13 are fake and will no longer be displayed.7 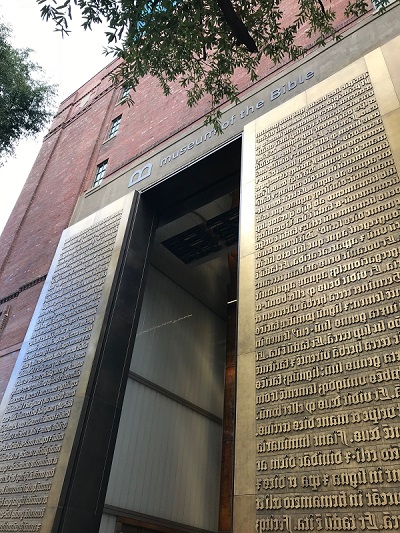 During my visit, I found the museum architecturally stunning, rather overwhelming, and an interesting mishmash of exhibits ranging from Old and New Testament exhibits, the Bible’s influence on fashion and literature, prison ministries, Civil Rights, Puritan persecution in Europe and settling in America, and much, much more. The small “Literature” exhibit — which discussed various books that have taken their titles from the Bible — was my favorite, and gave me a few new books to add to my reading list. I thought the exhibit about the Civil Rights era made a solid attempt at showing how biblical truths were abused and manipulated by slave owners and defenders, while also highlighting its use by abolitionists to defend the equality of all humanity. I wasn’t as impressed with the mural in another section which depicted a white pilgrim sharing the Good News with a group of eager-eyed Native Americans, which seemed disingenuous without an accompanying section to reference the atrocities brought against indigenous populations around the world at the hands of well-meaning Christians. But perhaps I simply missed that section. We were told by the docents who greeted our group that the museum would take 72 hours to explore in full. We were given three hours, but by the end I felt I’d seen everything I could (some sections cost extra and I did not visit those, nor did I visit the aptly-named “Manna” restaurant). Overall I was glad I got to see the museum in person. My uncomfortableness with the commercialization of Christianity (the museum gift shop was bigger than many of the exhibits) was juxtaposed with awe at seeing the hundreds (thousands?) of other visitors with whom I shared a common faith background.

The SAC conference wrapped up with an awards banquet for those who had submitted projects. Awards were given out for such areas as design, writing, video, spoken word, and campaigns.

It was a whirlwind of a conference, but I think its impact will have long-lasting effects on attendees. The college students present got to see what boots-on-the-ground journalism looks like from some of the best in the business and network with potential future employees, the communication professionals who attended learned about cutting-edge technology and latest best practices, but the biggest impact (at least for me) was seeing so many fellow young people excited about using their talents for the Church. I’m already looking forward to next year’s 30th annual convention in Albuquerque, New Mexico.

To watch select presentations from the 2018 SAC conference, visit the NAD vimeo page here or read more on the NAD website here.

1. Society of Adventist Communicators “About” page.

3. In true Millennial/GenZ fashion, attendees spent the weekend tweeting about the event, including quotes from presenters like President Dan Jackson. See #SACnad18.

4. Humans of Adventism “About” section.

5. That Christian Vlogger “About” section.

6. See “Museum of the Bible Opens Amid Controversy and Concern.”