The penultimate day of the 2018 North American Division Year-end Meetings on Monday, November 5, slowly built to a crescendo that ended in a motion to reduce the amount of tithe the NAD gives to the General Conference to parity with other divisions, and a personal appeal from NAD President Dan Jackson (read the full transcript of Jackson’s speech here).

The day began with the Treasurer’s Report from G. Thomas Evans, retiring NAD treasurer. The bulk of the report and subsequent discussion focused on tithe: what the NAD receives, how much is returned to the conferences/unions, and how much is given to the GC for use in other divisions around the world. 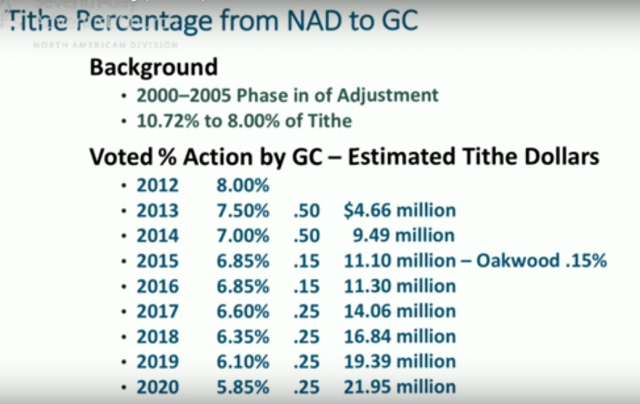 The amount left for use by the NAD is approximately three cents per gross tithe dollar, which is then spent as follows: 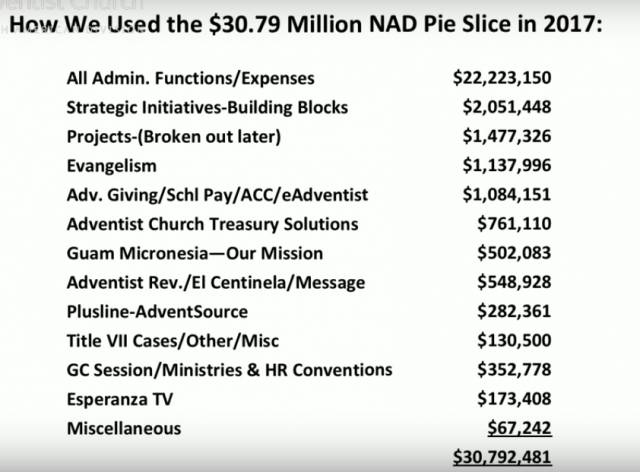 After the report, several delegates appealed to the NAD for more money allocated to helping immigrants and refugees within the United States. We need to let them know we know they’re here and we need to support them, said Dean Coridan, president of the Iowa-Missouri Conference. He continued saying that this needs to be addressed with the GC — they need to understand that North America IS a mission field, and serving, for example, the Karen immigrants here in the United States is just as important as supporting the Karen people in refugee camps across the world.

Debbie Jackson, a lay member from Colorado, spoke to the fact that there are children born right here in America who don’t have access to food or water. "North America IS a mission field...there is a mission field here with our children and I don't see us reaching out to them, and it hurts my heart."

The Treasurer’s Report was accepted unanimously by the body, and then Juan Prestol-Puesan, GC treasurer, appealed to the delegates saying the GC has needs, too. It has ministries it hasn’t even touched, not because of lack of heart, but because of funding limitations. “This is not our money, it is God’s money,” he said, and God will provide for needs. No division has enough money for its needs, but we trust God to provide. Prestol seemed well-aware of where the conversation of the day was headed — toward a discussion and ultimately a vote on tithe parity.

A few more financial reports, including ones from the Adventist Retirement department and the General Conference Auditing Services (GCAS), finished out the morning. The average mortality of an Adventist employee is actually less than that of the general population, retirement director Ray Jimenez told the audience. Robin Kajiura from GCAS told the audience that there are 321 entities within the NAD that are evaluated by GCAS. Of these, 73% were evaluated in 2017, and 90% of these received a standard (compliant) report. "That's a really good percentage," she said.

After lunch, a slew of additional reports were presented, including Christian Record Services, Adventist Media Ministries, and Oakwood University, before the discussion turned back to finance and Jackson opened the floor for discussion.

Terry Shaw, president of Adventist Health System, was first at the mic and immediately made a motion: “Recommend the NAD Administration to discuss with General Conference the issue of financial parity.”

Ohio Conference President Ron Halvorsen spoke in favor of the motion, saying that despite the fact tithe has increased in his territory, because so much of it goes to other divisions, there simply isn’t enough left to fund their mission here. The church in the NAD is aging, the faithful NAD tithe givers who are funding mission are dying. "I want us to be the giving-est division in the world," concluded Halvorsen, but if we don't do something now to support our NAD churches and schools, everyone, every division all over the world, will be hurt.

Calvin Watkins, president of the Southwest Regional Conference, said "We may fund a great majority of the world church, but when you look at our numbers of what we're baptizing, THIS is the new mission field."

Jackson asked Prestol-Puesan to come to the mic and explain how the GC would be affected by the proposed change. Prestol said that he wanted to interject some intelligence into the discussion. You are voting with emotion, he told the delegates, to murmurs of protest. He then continued, saying that to vote tithe parity is actually out of compliance, because only the GC can decide tithe policy.

"Tithe percentages are in the black book [Working Policy] as policy. If you say you want to change tithe percentages, you're saying you want to change policy.” It can be done, he continued, but it takes time and can’t be done this quickly, and even with these discussions, the NAD still wouldn’t be granted parity because the money from the NAD is necessary to fund mission. He said there are 500 families here serving the GC who would have to turn around and go home if this tithe parity motion is voted, because what is received from the NAD funds their salaries.

In conclusion, Prestol said the motion on the floor was out of compliance and world budgets have already been decided based on NAD tithe and cannot be changed now. We can't go back to the other divisions and say they won't have the money they were promised, he said. Jackson had to ask the room to maintain respect several times, as there were murmurs of dissent throughout Prestol’s remarks.

The responses to the amended motion were mixed, with some saying the NAD has a responsibility to the rest of the world to fund mission in less prosperous areas. Several said that to move to reduce tithe now sends the wrong message and seems retaliatory after what happened at Annual Council. But others spoke to the specific, urgent needs within the NAD. One delegate pointed out that we have the equivalent of third world countries right here in the United States.

A delegate called question, which was voted through, thereby ceasing discussion and moving directly to voting the amendment on the motion. The amended motion of adding “two to three years” to the motion was then voted and passed: 119 yes, 114 no, and 1 abstention. Only a simple majority was needed to pass the amendment.

The floor then opened for discussion on the amended motion. Mike Hewitt from the Mountain View Conference, after identifying his conference as the smallest in the United States, said, "We have real challenges, our people are faithful, they believe in mission...but I can tell you we have churches who won't be here in five years...How are we supposed to help other parts of the world when we can’t help ourselves?"

Carlton Byrd, director of Breath of Life, said the cost of doing ministry is rising faster and higher than what current tithe allocations can fund. “Salvation is free, but ministry takes money."

Keith Bowman, who founded the young adult ministry, “The Haystack,” said it is impossible to find money to fund youth and young adult missions and meet them where they’re at, which is online. He spoke to digital missionaries such as himself and Justin Khoe who runs “That Christian Vlogger.” Though The Haystack is now under the NAD’s purview, other great ministries are not because there is no funding to help them. But digital missionaries are the future and they need funding, concluded Bowman.

Dean Coridan, Iowa-Missouri Conference president, said he doesn't appreciate accusations of being in rebellion. If the GC recognizes the NAD is giving more than other divisions, but sees there's need here, they should have offered a solution themselves. But they didn't. And because they didn't offer a solution, they shouldn't kick or threaten the people on the ground when they are asking for a solution today. "In compliance, out of compliance, we are going to do mission," concluded Coridan.

Ron Carlson, Kansas-Nebraska Conference president said we can't keep kicking this can down the road. We've known about the needs for decades and our hands have been tied, but our members are saying enough is enough. We need to do something.

Todd Pascoe, lay member, stood in opposition to the motion. He said we have abundance in this country. "God is delaying the second coming so none are lost...and there are unintended consequences when we try to move this much money around.”

After many responses, some in favor, some against, and several conflicted, a delegate moved to end the discussion and take the vote immediately. That motion passed, and so the vote on the motion then occurred. The motion passed with 121 yes and 90 no (0 abstentions) and was worded as follows: "Recommend the NAD Administration to discuss with General Conference the issue of financial parity, with parity to be accomplished in two to three years."

With the vote out of the way, Jackson seemed to feel the time was right to share his personal opinion on the actions of the GC. In what appeared to be an off-the-cuff appeal, Jackson spoke for 20 minutes on the way the Church has mistreated women and the NAD’s dedication to women pastors. Read the full transcription of Jackson’s sermon here (watch the video at this link, too).

Lastly, the writing committee’s proposed document was passed out to delegates to study overnight and to discuss the next day. Alex Bryant, NAD executive secretary, made an appeal from the dais that no one share the document with anyone outside the room. Media outlets were asked not to post it until Tuesday, after the discussion was underway. (The document has since been voted and officially released. Read it here.)

Though the NAD officials are now tasked with beginning conversations with the GC regarding tithe parity, only time will tell whether the GC is willing to acquiesce to the request. If Prestol’s comments earlier in the day are any indication, the GC may simply say “no,” claiming such a request is out of compliance.

Editor's Note: This article was updated on Nov. 7, 2018 (9:20 a.m. ET) to correct the exact wording of the motion. The original article incorrectly stated the final motion read: "Recommend the NAD Administration to discuss with General Conference the issue of financial parity to be accomplished in two to three years." The final wording voted included the words "with parity," as noted in the corrected article above. We apologize for our error.