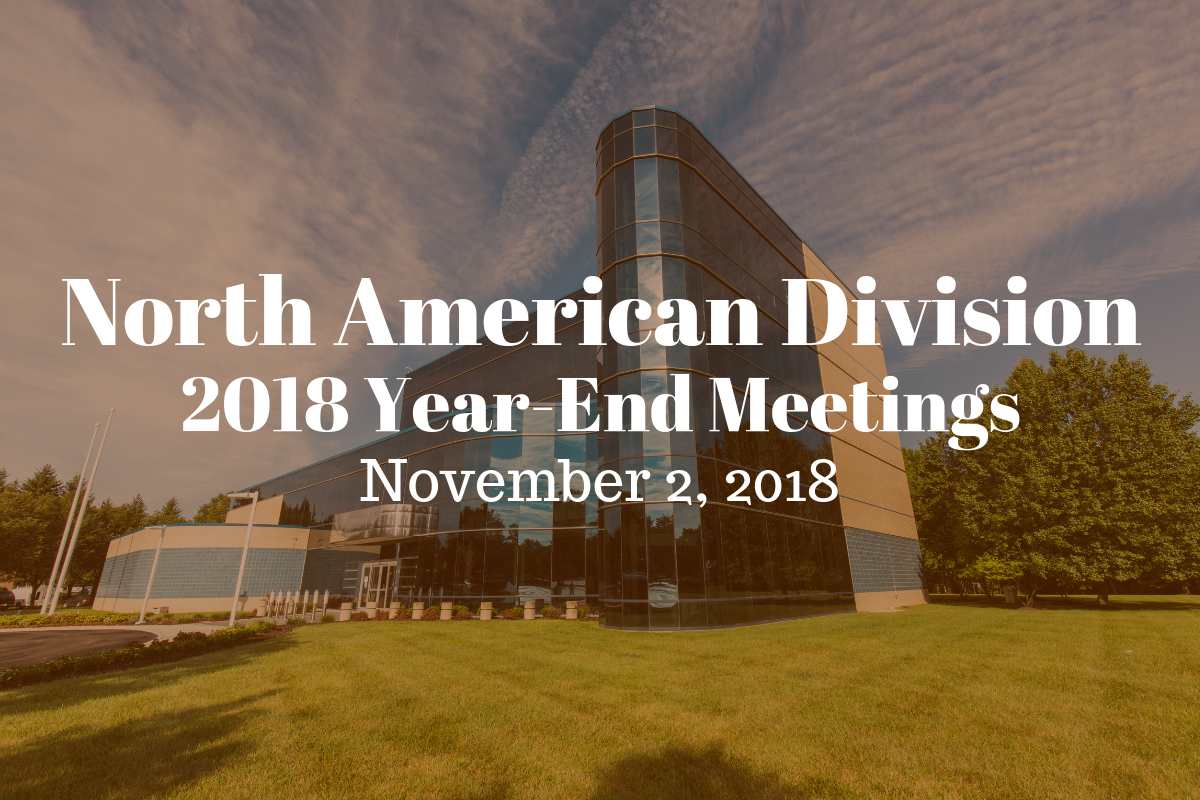 The topic of the day was strategy and cohesive vision as the second business session of the North American Division Year-end Meetings got underway on Friday, November 2, 2018, and the speakers came prepared with a rallying cry: “North America IS a Mission Field!”

This steadfast message built on Dan Jackson’s President’s Report yesterday which outlined the accomplishments and goals of the NAD from 2011 through 2020, and emphasized the need for more money to fulfill the mission here at home.

The first order of business was testing the electronic voting devices the NAD uses. Returning delegates are already familiar with these, having used them in years past. "If you cannot operate these things properly, give us your name and you will automatically become a delegate for the next General Conference,” Jackson said in mock seriousness, referencing GC Session 2015 where the electronic voting devices were scrapped on day one and paper ballots were used instead. (The GC has continued its use of paper ballots at meetings ever since.)

Next the nominating committee — which met last night to consider names for five positions — reported its recommendations to the body. Some of the positions are currently open, while other appointments will begin on January 1, 2019 when the current individuals in those roles retire. All five recommendations passed as follows:

3. Literature Ministry Director: Carl McRoy, who currently serves as publishing director for the South Atlantic Conference and has extensive experience in literature work. This is an open position that Jackson said they have been trying to fill for seven years. Vote passed: 209 yes, 7 no, and 8 abstentions.

4. Volunteer Ministry Director: Ernest Hernandez, who has been in that department for 11 years, and serving as acting director for one year. Vote passed: 181 yes, 5 no, and 2 abstentions.

5. Stewardship Ministry Director: Bonita Shields, who has served as associate director for Stewardship for two years, and Adventist Review editor/assistant director for nine years before that. Vote passed: 195 yes, 4 no, and 1 abstention.

After the new positions had been filled, G. Alexander Bryant gave his Secretary’s Report. He included a broad sweep of NAD statistics, from growth over the years, to missing and deceased members, and tithe dollars in the door. As of December 31, 2017, the NAD stands at 1,249,715 members, 5,561 churches, and 852 companies.

Bryant discussed the NAD membership numbers by unions, and by conferences within their respective unions. As has been true for many years now, the Southern Union continues to lead in the number of baptisms and accessions, thanks in large part to the number of retirees gracing the Florida Conference. The Southwestern Union saw the highest percentage growth over the past year, while the Pacific Union — and most specifically the Southeastern California Conference — continue to experience extremely high numbers.

A topic of concern that Bryant said pierces straight to his heart is the number of members who have left, as well as the number of “missing.” As is true throughout the world church, almost half of those baptized into the church end up leaving. Bryant said this is a topic of great concern that the NAD is taking seriously, and they are working on strategies to help prevent this loss, and to bring those who have left back into the fold. "If we focused on keeping those we baptized, it would fill every church pew in North America," he said.

Newly appointed Volunteer Ministry Director, Ernest Hernandez, gave a brief presentation on the number of missionaries. The NAD sends out over 50,000 people on short-term mission trips throughout the year, and about 1,000 on long-term mission trips. There is a great need for more individuals able to serve long-term, said Hernandez. In addition to sending these missionaries to over 80 countries around the world, there are also missionaries serving right here in the NAD. Hernandez discussed the number of migrants, refugees, and indigenous populations who all need the gospel. "The NAD has become a mission field. The world is coming to us,” he concluded.

A moving video of just a handful of the NAD missionaries serving throughout the world was then shown:

Doug Venn, director of the Global Mission Urban Center which focuses on mission work in the inner cities, explained how they use big data to look for under-served areas that are in need of the gospel message. He showed the audience a heat map of Los Angeles and surrounding areas that illustrated where Adventist churches and centers of influence are located, and where they are still needed.

Finally, in the most recent numbers available (2016-2017), 94% of membership is outside the NAD and is contributing 56% of the church’s total tithe.

Bryant’s report was received unanimously by the body, and then Paul Brantley, NAD vice president for Strategic Planning & Assessment, took the stage to deliver a presentation on “The Great Disappointment.”

Great disappointments for the church occurred in 1844 when Jesus did not return as expected, in 1901 with the church’s organizational crisis that resulted in unions being formed to combat “kingly power,” and most recently, on October 14, 2018, said Brantley. But, the biggest disappointment of all was in AD 31 when Jesus was crucified, he told the audience. Out of all of these disappointments came an opportunity for “a new way of looking at the world.”

An 84-page booklet containing the Strategic Plan for the NAD was then passed out to each delegate. The plan outlines the cohesive vision for the entities under the NAD umbrella. "May God help us as we turn every great disappointment into a GREAT AWAKENING in 2019!" Brantley said at the conclusion of his report.

Pacific Union President Ricardo Graham then made a comment from the floor, calling attention to an error on page 81 of the strategic plan, where the Southeastern California Conference was left off the list of conferences in the Pacific Union. He emphasized that President Sandra Roberts, who was just re-elected in October to another 5-year term, is doing great work leading souls to Christ in her territory.

Jackson acknowledged that this was an error and apologized profusely, telling the audience to get out their pens and add in the SECC right then. “That doesn’t feel good,” he said, and it wasn’t intentional. We don’t approve of names being left off lists, he assured, referencing the fact that Roberts’ name has been intentionally left out of the General Conference’s Adventist Yearbook since her election to the office of President.

Any speculation that the oversight in the NAD’s booklet was intentional was quickly squashed as two more delegates went to the mic to mention two more omissions: the Dakota Conference (Mid-America Union) and the Carolina Conference (Southern Union). Brantley jokingly made a motion that the entirety of page 81 be stricken from the booklet. Jackson said they obviously needed to do a better job proofreading in the future and would get these errors corrected.

The rest of the day’s business session focused on three brief reports:

Dick Hart, president of Loma Linda University Health, discussed the EXSEED program, which provides STEM training and grants to K-12 teachers, at no cost to them. The only cost to attend the EXSEED conference is the plane ticket to Loma Linda, he said. Meals and lodging are covered, and there is no registration fee. Larry Blackmer made a comment from the floor, arguing with Hart about his statement that there is no cost. “There is GREAT cost,” said Blackmer, but it is one that Loma Linda bears itself in its dedication to Adventist teachers and schools.

Ken Denslow, assistant to the president, and Monte Church, NAD Native Ministries director, discussed the outreach initiatives to indigenous populations. Church said the NAD’s “Native New Day” Bible study video series has even been used by non-Adventists to preach the gospel. President Jackson and advisory members of Native Ministries then took part in a Native American blanket ceremony, praying over and honoring Brian and Nina Cladoosby, and two of their grandchildren, from the Washington Conference. Brian just completed two terms as president of the National Congress of American Indians and has been able to give the Adventist message a wider influence through his leadership with this organization.

Ken Norton, president of the Guam-Micronesia Mission, first shared about the devastation from the extreme Category 5 typhoon that hit the territory just last week — the world’s strongest storm of the year, and the worst to hit the U.S. since 1935. Norton said the islands of Saipan and Tinian are not expected to regain electricity for four to five months, and one Adventist church in Saipan was completely lost. Norton encouraged the delegates to contact Adventist Community Services to find out how to help, as they are coordinating relief efforts there. Norton then shared some encouraging news: the Guam-Micronesia Mission now has a boat to reach the 92 islands in the area and spread the gospel to the 400,000 people who live there. Of the 92 islands, 66 currently have no Adventist presence. "The gospel going to the whole world includes the beautiful people of Micronesia,” said Norton.

After the reports today, there can be no doubt that the North American Division is indeed a mission field, and one that could perhaps see “explosive” growth as well, if funds were proportionately aligned with the vision, mission, and needs of the North American territory.

WATCH the 2nd business session of the 2018 NAD Year-end Meetings: