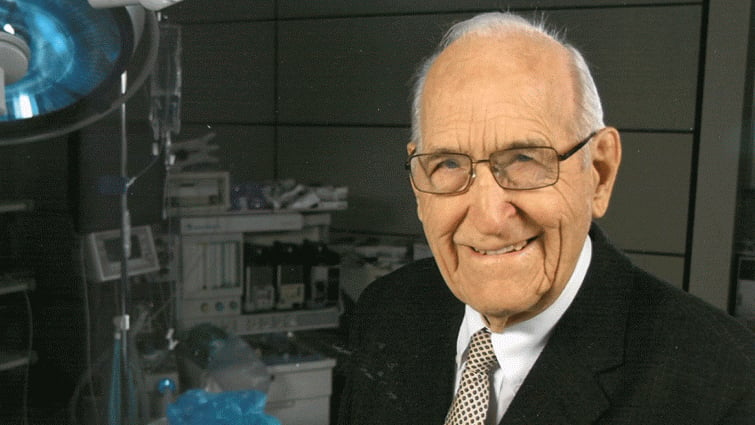 LOMA LINDA, CA — December 18, 2018 — Ellsworth Wareham, MD, known at the end of his life as much for his vegan-supported longevity as his distinguished surgical career that included the first open-heart surgeries in many countries, died Saturday, Dec. 15 at the age of 104.

An ebullient and active centenarian, Wareham — a 1942 surgical graduate of Loma Linda University, then known as the College of Medical Evangelists — gained global fame through numerous media outlets in his later years for being the epitome of a “Blue Zone” resident, someone who lives in one of the healthiest parts of the world.

According to a 2008 article in National Geographic, Wareham epitomized the Seventh-day Adventist lifestyle of a vegan diet, exercise and faith in God, all of which the physician cited as reasons for his longevity.

“I think it's important for an individual to have some security and peace in his life,” Wareham told Dr. Mehmet Oz, at the time a contributor to Oprah Winfrey’s television program, in 2008. “And I get that from believing in a loving, caring God, you see. And so if He's in charge of my life, why sit around and worry? I mean, He takes care of the universe, He can certainly take care of me, so I don't worry.”

During his medical career, Wareham performed more than 12,000 operations and continued to assist and observe younger surgeons until he was in his mid 90s. At 100, he drove and continued to do his own gardening and lawn maintenance, and lived in the two-story house he and his wife of 68 years, Barbara, shared.

Perhaps his greatest medical accomplishment came in the early 1960s, when the American administration of President John F. Kennedy was trying to improve relations with many nations, including Pakistan. A visit there by then-Vice President Lyndon B. Johnson led to a young Pakistani girl being brought to White Memorial Hospital in Los Angeles for open-heart surgery.

In turn, that led to an invitation from Johnson’s office to go to Karachi — also home to an Adventist hospital — and perform surgeries there.

Speaking with Loma Linda University Health historian Richard Schaefer in 2002, Wareham recalled his answer to the vice president’s official request: “‘Well, if you pay our way, pay for shipping our equipment, we'll go.’ There were just six of us. We went. We took our heart-lung machine and all the supplies. [And we] got over there.”

At the time, Wareham recalled, Pakistani “Muslims didn't want to give blood. They equated it with the same thing as sacrificial blood-letting. But we got military people from the U.S. embassy.…We took this machine and primed it with blood and used the same blood on the patient in the morning and in the afternoon if they were the same blood types. First time I'd ever heard that done. That's the way we got started.”

The surgeries did much to enhance the image of the U.S. in those days, and the Loma Linda University Health surgeons, Schaefer noted, went on to do additional work in Asia before their return. “The team performed more surgeries in India and Thailand: Christian Medical College and Hospital in Vellore, South India and at Siriraj University Medical School in Bangkok, Thailand. Altogether they saw 400 patients and performed fifty-five surgeries,” a history of the project recorded.

Such programs are now somewhat matter-of-fact around the globe, but during the 1960s and early 1970s, the procedures were considered new in many parts of the world. Wareham, assisted by cardiologist Joan Coggin, MD — who died last month — was a true goodwill ambassador for Loma Linda University Health, the Seventh-day Adventist Church and even the United States of America.

The early procedures relied on heart-lung machines that pumped blood to a patient while the surgery was being performed. In one instance, blood being used to support a surgical patient was too warm to be used, meaning the procedure would have to be delayed while the machine was paused, cleaned and the process restarted. In an interview, Coggin once recalled Wareham’s own calm demeanor, even under extreme circumstances.

“He was very calm, all the time, and sometimes surgeons, under pressure, will sort of [display emotion],” Coggin said. “No matter what would happen, he would just say ‘well, we have to do this and this’ in a moderate tone instead of getting hysterical.”

She added, “I never saw him, ever, get riled about anything.”

“Dr. Wareham was specially cited as the quintessential example of the Blue Zone by many authors,” said School of Medicine Dean Roger Hadley, MD. “His diet, exercise program, sense of community, sense of humor and spiritually based approach to life clearly contributed to his centenarian status. He will be greatly missed.”

Hadley also noted that Wareham was also a mentor to surgeon Leonard Bailey, MD, who in 1985 performed the first infant heart transplant.

Ellsworth Edwin Wareham was born Oct. 3, 1914, in the east Texas town of Avinger, a waystation en route to the Texas-Louisiana border. He was one of six children born to Dayton Wareham and Goldie Baldwin Wareham. Both parents were Seventh-day Adventists when Ellsworth was born.

Each of the Wareham children ended up in health-related work: three brothers became dentists, two sisters took nursing, with one also being a physical therapist.

The family’s early years, beginning when they relocated to Alberta, Canada when Ellsworth was six years old, were difficult.

“We were a family of very limited means,” he recalled in the 2002 oral history interview. “We were a large family, farmers. At the time when I was a teenager, we were in the middle of the [Great] Depression. And the depression in Canada was a very severe depression, particularly for farmers. Wheat sold for 30 cents a bushel. Oats and barley for 6 or 7 cents a bushel. These were our cash crops. Animals were worth little. It was a very difficult situation to have any plans for achieving an education of any degree. The people in our community…none of my classmates ever got a college degree.”

After his two years at the junior college, Wareham was “out of school for two years,” he recalled, during which time he had the prompting to go into medicine.

“It was when I was out of school that the definite conviction came upon me that I should take [up] medicine,” Wareham said. “I might say that it was as strong as hunger. It wasn't just a vague idea. There was no other option. It wasn't whether I had the money or didn't have the money or how I would accomplish it. I had to accomplish it, no matter what it took to do. My credits were such that I had to take extra [course] work because I didn't have my pre-med sciences in order. So I had to go back and take additional work although it was at the same level. I only had what would be the equivalent of two years of college.”

He served as a surgeon during the end of World War II, working on a ship near the Philippines.

Training in Los Angeles, New York City and Minneapolis followed as Wareham developed his skills in general surgery, thoracic (chest) surgery and, finally, cardiac surgery. During one of his surgical residencies, Wareham met Barbara, then a young nurse, whom he married in 1950. The Warehams had five children.

In that 2008 interview with Dr. Oz, Barbara Wareham admitted she was not anxious for her husband to ever retire: “People ask me that a lot and I just say, ‘Leave him alone. He's happy,’” she said. “I don't think he'd be nearly so happy just sitting at home.”

In 2014, Loma Linda University honored Wareham with a reception noting his 100th birthday, and the creation of the Ellsworth E. Wareham Global Service and Education Fund.

Survivors include his wife Barbara, children John, Martin, Robert and Julie, eight grandchildren and six great-grandchildren. His son Scott preceded him in death in 2015.

Tribute gifts may be made to the Ellsworth E. Wareham Global Service & Education fund.

This article was written by Mark A. Kellner and originally appeared on the Loma Linda University Health website. Image courtesy of LLUH.

Editor's Note: The title of this article has been updated on the LLUH site from the original, "In Memoriam: Ellsworth Wareham, ‘Blue Zone’ pioneer and cardiologist, dies at 104" to "In Memoriam: Ellsworth Wareham, 104, was ‘Blue Zone’ pioneer and cardiothoracic surgeon." We have updated the title on our site to reflect this change as well (Dec. 19, 2018, at 2:50 p.m.).