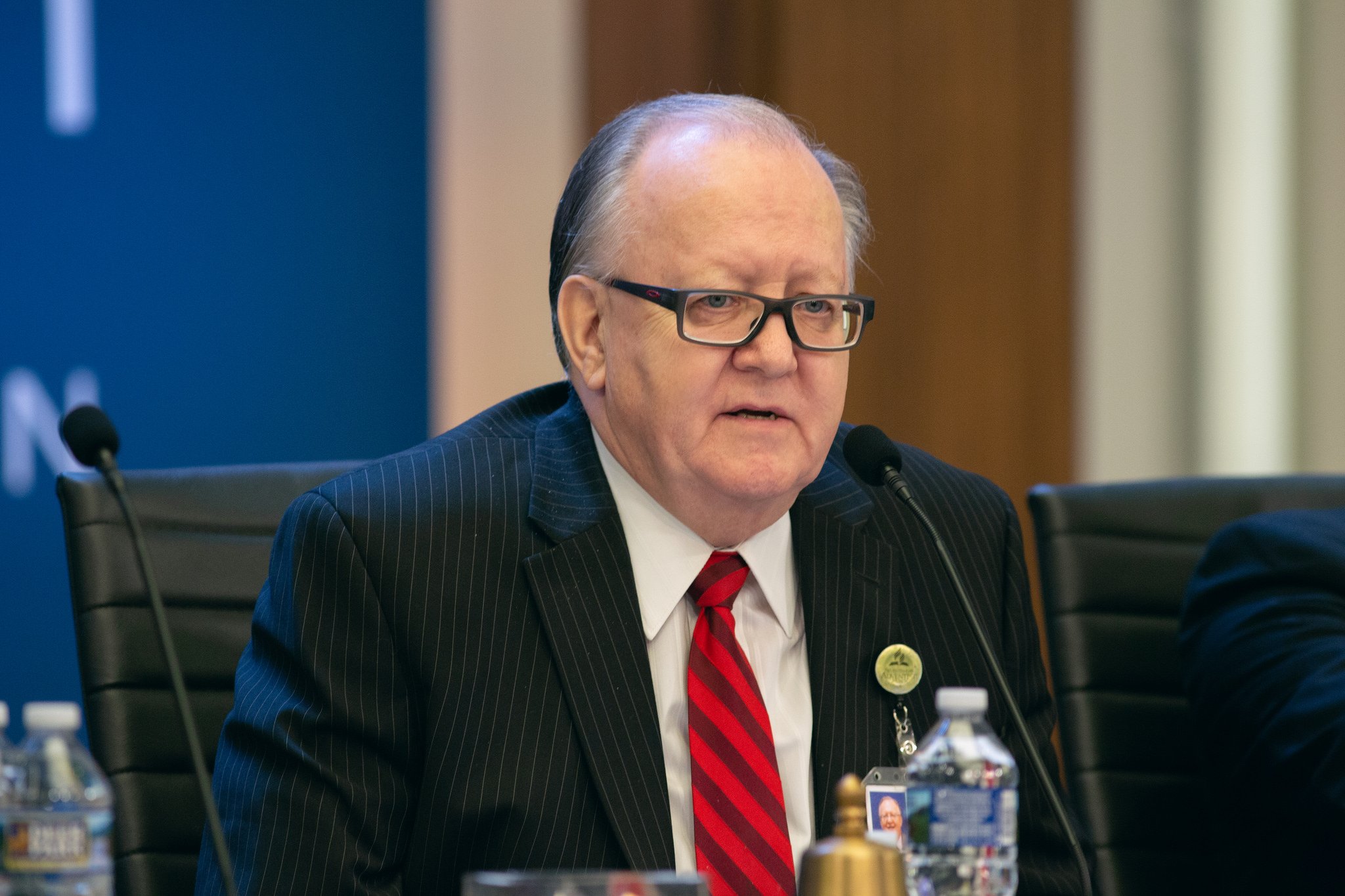 Editor's Note: This is the November 5, 2018 statement from North American Division President Dan Jackson following the discussion and vote to bring the amount of tithe sent by the NAD to the General Conference into parity with the other world divisions within the next three years.

I think we are done for the day. Now please come tomorrow with your running shoes, because we have a lot to accomplish tomorrow. I want to make a statement before you get up.

I want to make a statement that is very sensitive. But I am saying it to you, and I don’t know if we are streaming still. It doesn’t matter if we are, or if we are not. I think the discussion of the last two days demonstrates a malaise in the church. I believe that all of us need to pray that we will overcome that malaise, or at least the spirit of God will overcome that malaise in the church. We must appeal to God to bring us together.

I will say from the perspective of serving as the president of this division for eight years, that I am very tired and probably angry at the way our division is looked at by the world. (Amens from the audience.) We are not rebels. We are Seventh-day Adventists (Amen). There is tremendous loyalty to the church in the North American Division. Once again, I would challenge — and I mean challenge — someone to find any of the divisions that are more loyal to the church, both in terms of policy and finances than the North American Division. I will not sit here and tell you what I know, because it would be embarrassing to the world church. But if we have two unions, or 49 women who have been ordained, these are small matters compared to some of the other matters that exist around the world (Applause).

I don’t know where the discussions will go that we’ve just voted, but I will tell you, there had better be a spirit of reconciliation on the part of all. No condescension. No, we are not your students. We are colleagues together in ministry with our brethren from the General Conference. Period. It will be unacceptable to the three of us, as it is unacceptable to you, that you’re looked down upon. It’s just not acceptable. I will not tolerate it, and I mean that just as I say it. I will walk away so fast it will make anybody’s head spin. This division has not only been the breadbasket, but it has been the source of human resources that have fanned and fueled mission and growth and development in the world church for decades. And I hope and pray it will continue to be. I hope and pray that we can come to an amicable resolution of the financial issue that is pregnant in this division. Because we don’t live in the days (breaks into song) “The days of wine and roses.” We don’t live in that world anymore. We just don’t.

I want Jesus to come (Applause). I expressed some time ago to Elder Wilson, following the 2015 General Conference [Session], these sentiments: “I know that you believe we are on the borders of Canaan. I don’t believe that. I believe we are headed back into the wilderness.”

We all bear a responsibility here. We have got to stop talking about the brethren like they’re scumbags. We must pay respect, give respect, and appeal that we work together. Condescension isn’t pretty on anybody. So, by God’s grace, this has been a serious period of time these last two days. And we still have some territory to cover.

Punishing people is something that God ultimately will do. In my opinion, and I know this steps on toes, I will never agree to that document (Applause). It was voted by the world church. There was a majority vote. And the General Conference will have to apply whatever principles it needs to apply or it thinks to apply. Because you see, you understand, the North American Division has never said we do not think there should be any accountability. We have never said that. As a matter of fact, as I said the other day, we offered a way through by request from the president of the General Conference. We offered a way. It was rejected. So what I’m saying now is that I am praying that God will give us the collective sense to assist us to find that document in the paper shredders (Laughter).

If God is with a movement, it will prosper. If He’s not, it is doomed to failure. I just have a very hard time believing that women are doomed to failure who are guided by the Holy Spirit (Standing Ovation).

I am not talking about — you know, people have different opinions — and I want the folks who think right now that I’m an absolute raving lunatic, to know I support your right to believe women should not be ordained. I support your right. You are a member of God’s church. You are our brothers and sisters, and I’m not talking about that. I am talking about words entrenched in policies that beg credulity. You can’t tell people today, “We love everybody, and everybody can do everything, except those positions that require…” Get that policy out of there. Just come out and say, “We do not believe in ordination of women. Period.” That’s all you have to say. But that nonsense, that hooey (Applause), in the B60 policy that allows us to put a noose around the neck of women is garbage (“Hooeys” from the Audience). It’s a good word. Don’t say three times, “We love everybody, and everybody’s acceptable, and you can do anything, except if there’s an ordination requirement, and then come to the end of the policy and say all of these ‘except’ statements in parentheses do not apply - and do not apply them - to women who have been ordained as elders as it has been voted by the General Conference.” I’m sorry it begs credulity.

There is more hooey — there is hooey in the male headship theology. It was never Seventh-day Adventist, it is not Seventh-day Adventist, and it is not going to become Seventh-day Adventist. So, here’s a story. My good secretary just said, “Calm down.” He’s a good man. You know, we will continue to pray that God’s spirit will lead the church, so that our women will not be held back or limited by glass ceilings that we have created to in order to protect our own positions (Applause).

So, I just wanted to tell you a thing or two at the end of the meeting (Laughter). I know there will be some folks who will be madder than a hornet with me. And my basic statement is that if you are mad as a hornet, “Buzz off.” Because I have to tell you, I have lived through this for eight years and I am tired.

Let us determine by God’s grace that we will work: a) to support our women, that we will work — and this is painful — in harmony with the brethren, because that is part of our role, and the brethren around the world have said, “No.” So the onus is on us to demonstrate that our women are spiritual women of God serving Him, building ministry for Him, and we will not pull back. We are not going to quit a) hiring women pastors. If you feel we’re going to, or you’re going to kick up a fuss about it, too bad. We will not stop. Furthermore, we will continue to agitate for the ordination of women to the Gospel ministry.

Having said all that I have said in the last twenty minutes, I want to say: I have made an issue of this, because of the last two days. But this division, having said that, is not about Women’s Ordination. It’s about evangelizing the world with the Gospel of Jesus. And I don’t remember who it was, I think it was Todd Pascoe, who said we need, no, it was our brother from Columbia Union, we need to find new ways and new methods of evangelizing for Jesus Christ.

Some of us will do that believing in Women’s Ordination, some will do that not believing. I’m appealing to all of us, let’s touch each other, let’s work into each other’s hearts. We are brethren, or we are the bristers, you know? You know what a brister is? That’s a combination of a brother and a sister. We are the bristers (Laughter). And we must work together. We have, and will always have, some impediments, but let us not be deterred. Let us move forward in our mission and with joy in our hearts — not anger — but joy in our hearts because the Lord Jesus, who came as a baby in a manger, is going to come again. And He wants us to live with Him, and with each other, forever.

And you know what I know about heaven? There’s not going to be one argument about women’s ordination. It’s like we used to say when I was a pastor: “There are good things about every period in history, for instance, the time of trouble, there will be no Ingathering.”