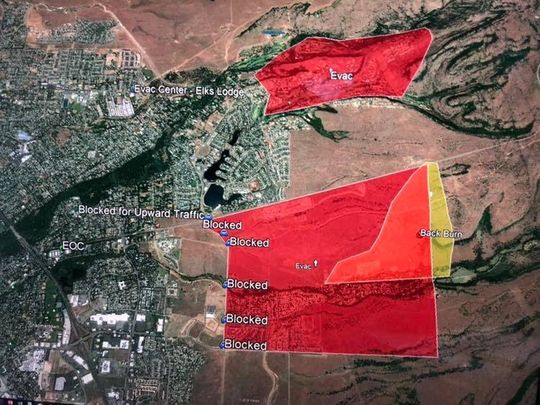 Adventist Health Feather River Hospital Closed, Possibly Destroyed, Due to Camp Fire. According to the California Highway Patrol, reports of a small fire in the canyon came in around 6:30 a.m. on November 8. By 9 a.m., the fire was estimated at 2,500 acres, and by 1 p.m. was at 8,000 acres, but is now estimated at over 20,000 acres according to the California Department of Forestry and Fire Protection. A note on the Adventist Health Feather River website said: “Our thoughts and prayers go out to everyone in our community during this challenging time. Due to the current Camp Fire, Adventist Health Feather River is closed. All patients have been safely evacuated and transported to Oroville Hospital or Enloe Medical Center.” At 3 p.m., hospital spokeswoman Jill Kinney said clinics and other outbuildings were on fire or had been damaged, but the main hospital was untouched. By 4:28 p.m., it was reported that the hospital had been destroyed, but later reports from Butte County Supervisor Doug Teeter said he believed the old portion of Feather River Hospital had burned, but a newer addition was safe.

As of the morning of Friday, November 9, a note on the hospital website said all patients, physicians, and staff were evacuated safely. The statement continued: “Multiple media outlets have reported the destruction of Adventist Health Feather River Medical Center in Paradise, California. While we did sustain damage to some parts of our property, we are unable to confirm the full extent of that damage at this time. Until it is safe for our team to return to the site, we are unable to confirm any reports.” At least 27,000 people in Paradise have been ordered to flee. Winds that have helped fuel the monster fire are expected to ease a bit through the day Friday, but the National Weather Service said another round of gusty winds could whip into the area Saturday night and Sunday. Ron Angle, a long-time former volunteer firefighter, said he hasn't seen a fire in the area as severe as the Camp Fire in his nearly 40 years there. "I suspect the residential and commercial structure loss will be catastrophic," he said. From Record Searchlight, “20,000-acre Camp Fire reaches outskirts of Chico; burning near Skyway” and from Adventist Health Feather River, “Camp Fire Update.”

Loma Linda to Pay $3.2 Million to Fired Muslim Employee. A jury has awarded $3.2 million in damages to a Muslim who claims he was harassed for years by his supervisors at Loma Linda University Medical Center and ultimately fired because of his Islamic beliefs, his lawyer said. The award to Hugo Lizzaraga, 44, who worked 20 years as a warehouse employee at the hospital, capped a six-week-long trial in San Bernardino Superior Court and five days of deliberation. “We are happy this hard-working jury resolved this injustice in his favor,” said Lizarraga’s attorney, Todd Harrison. “He was courageous for many years and stood up to Loma Linda, which is the largest employer in San Bernardino County. This is truly a David-versus-Goliath story.” Loma Linda disagrees with the jury’s verdict, said hospital spokeswoman Kelsey Tyree Culler. “LLU Medical Center did not discharge the employee because of his religious beliefs, but because of his reported threatening conduct,” she said. “LLU Medical Center complies with and honors federal and state law regarding discrimination and harassment and does not tolerate it in the workplace.” It was unclear whether the hospital plans to appeal the jury verdict. From The Press-Enterprise, “Fired Muslim awarded $3.2 million in discrimination suit against Loma Linda University Medical Center.”

SDAs Challenged Nigerian Government over Saturday Voting. Members of Seventh-day Adventist Church have challenged the Nigerian Federal Government, the Attorney General of the Federation, and the Independent National Electoral Commission (INEC) in court over alleged violation of their fundamental rights. The SDA members include Chief Emeka Anyabelem, Elder Asonye, Felix Minikwu, and Chinedu Omesurum. They are seeking a court injunction mandating INEC to stop holding elections on Saturdays. They are demanding that elections should be held on weekdays between Monday and Thursday. The respondents also want the court to award them fifty million naira as general damage for breach of fundamental rights to Freedom of Religion as guaranteed under the Nigerian Constitution and the African Charter on Human and People’s Rights Act. Speaking to newsmen outside the courtroom, Ahamefule Owurre, counsel to the claimants, while highlighting the reasons for challenging the day adopted for the election, said, “Why must they hold election on Saturdays? There are people who worship on that day, but anytime an election is held, they cannot go to their place of worship. For us, we believe it is an infringement and must be corrected.” From Daily Post — Nigeria News, “Election Day: Members of Seventh Day Adventist drag INEC to court over ‘Saturday.’”

Adventist Files U.S. Supreme Court Case Regarding Sabbath Observance. Darrell Patterson, a Seventh-day Adventist, has filed a case with the nation’s highest court, seeking the first court decision in 30 years to address the Sabbath. “A person that has a religious conviction has really been put in a place to make a choice between their religious conviction and bringing home a paycheck and taking care of their families — a really pointed and harsh predicament to put anybody in,” Patterson said. From the time he began his employment with Walgreens in 2005, Patterson said he was clear with his employers that he would be unavailable during the Sabbath period, indicating it in his employment application and via a letter from his pastor. Over the years, Patterson’s job schedule rarely coincided with Saturday, and when it did, Walgreens allowed him to swap schedules with his coworkers. On two instances, he was written up for leaving work on Friday evenings. Patterson was fired from his job at an Orlando Walgreen’s Customer Care Center for missing work on a Saturday in 2011. When he was fired, Patterson sued, claiming religious discrimination. Both the district and appeal level courts sided with Walgreens, saying the employer had done enough to accommodate Patterson in his six years of employment with the pharmacy chain. How much is enough and what constitutes religious discrimination may now be something for the U.S. Supreme Court to consider. From Orlando Sentinel, “Fired for missing work to observe his religion, Orlando man asks U.S. Supreme Court for help.”

New Glendale Adventist Academy Principal Hails from Nigeria. Israel Olaore, the new principal of Glendale Adventist Academy elementary and high school, wants to raise enrollment, re-engage with the alumni association, make the school with 428 students more affordable, and reintroduce the institution to the community. “We need to make sure staff members have a good working relationship with each other, that the office is responsive to the needs of teachers, and we need to prioritize students to make sure that they’re learning,” Olaore said. He added, “Our goal as a Christian school is to bring positive Christian values to the learning experience.” Glendale Adventist Academy’s 22nd principal is somewhat different from his predecessors: he is Nigerian. The 57-year-old earned a bachelor’s degree in philosophy from Nigeria’s Obafemi Awolowo University, master’s degrees in pastoral ministry from Andrews University and in intercultural studies and theology from Fuller Theological Seminary in Pasadena, along with a doctorate in higher education and higher education administration from the University of Arizona at Tucson. The former pastor served as associate vice president and chief of staff from 2010 to 2013 at Babcock University, a Nigerian school with 20,000-plus students. From the Los Angeles Times / Glendale News-Press, “Unexpected path leads Olaore to Glendale Adventist.”