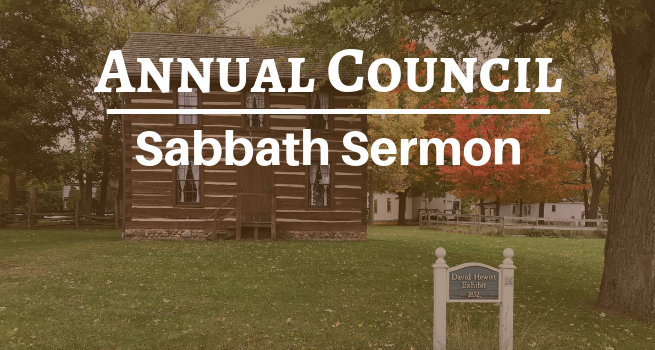 Comments on Ted Wilson's Sabbath Sermon, October 13, at the 2018 Annual Council: The Past With a Future - Looking Back to Move Forward Led By God

Ted Wilson is a good speaker. His presentation is well articulated, he easily engages his audience, he sprinkles his sermon with short catch phrases that trigger loud "Amens." He is easy to follow, and keeps the attention of his listeners. His speaking is relaxed, but not calm, as his pathos is well visible. It looks as if he speaks without a manuscript, though it may be placed in his Bible. He keeps his eyes fastened on the audience and addresses them directly, and they, in turn, keep their eyes fixed at him, most of the time. He presents himself as a dynamic person with a message that is important to him, and by extension the church he heads. He emphasizes his main points clearly. From a performance point of view, it is a pleasure to listen to Ted Wilson.

His sermon has a good structure well adapted to his message. His listeners never have to guess what he is talking about, and he advances from point to point in an orderly manner that leaves no one in doubt where he is headed. His main illustration — images on the big screen of mileposts/markers along a road — are numbered, and accompanied by a few short lines of text that hammer home his points. Each milestone marks a separate topic of concern, looking backward and pointing to the future and the end of the world. The phrase "The Three Angels' Messages" is the big container from which he hauls up the individual points of concern.

Towards the end, he becomes more eloquent as he tries to draw his conclusions, clothed in spiritual appeals to remain faithful, stand fast, and go into the future with confidence and power. Drawing on the story of the 12 spies sent into Canaan that came back with only two encouraging the Israelites to attack, and the ten advising against it because the inhabitants of Canaan were seen as strong, invincible giants with big fortified towns. Wilson focused upon the ten's self-perception of being small grasshoppers in comparison. The appeal was that the SDA Church was a strong giant, growing fast with thousands of baptisms, and therefore we must not view ourselves as mere grasshoppers. This pep-talk section caused many in the audience to shout loud "Amens" in approval.

The underlying message embedded in the sermon was not difficult to discern, but it may well be that the fiery performance — for some — tended to cloud this message because of the appealing performance.

The many milestones/markers all contained a double message. Each message milepost was drawn mainly from SDA history, culture, music heritage, dress codes, etc., and Ellen White's famous statement that we have nothing to fear for the future, except that we forget the past, was quoted several times.

So, what were these 18 messages?

Most of them focus on some item that has caused concern, one way or the other, and that has been discussed and critiqued in the past few years, from recent creation, with double emphasis on "recent," music, youth programs and activities, dress codes, diet, sexual behavior and family life, worldliness, the trinity, church authority, lifestyle, the three angels' messages, Sabbath, unity, Spirit of Prophecy (Ellen White), methods of church growth, persecution for biblical faith, ecumenism, righteousness by faith, doctrines, worship styles, distribution of heaven-inspired books, Last Generation Theology.

In all of these areas the presentation followed a common dichotomy pattern: Recommending one version, discouraging or warning against another version; the one presented as "biblical truth," the other as deceptive, "unbiblical" practice. The dominating thought pattern was clearly simplistic black-white, either-or, for-against. In all of these areas there was no attempt to see any gray zones, no uncertainty regarding the promoted positions, no serious attempt to engage the very relevant challenges presented by our surrounding secular society and its secular worldview, no suggestion or encouragement to seek new modi operandi, to re-evaluate the effectiveness of our present programs and witnessing strategies. No new thoughts could possibly replace old thoughts. The parade of old 19th century attire worn by many participants, including the speaker, was a tell-tale illustration of this lack of re-visioning our approaches to evangelism, church life, and private life.

And why should they be re-visioned? Everything was already a great success, illustrated by the many thousands of baptisms that every year increased our membership statistics, if not in the Western world, so at least in the developing world. "If it ain't broke, don't fix it!" seemed to be the mantra. If there were any hints of brokenness, that was caused by departure from the old ways of thinking and acting. The speaker stressed that he was not leading the church back to the 19th century, but gathered inspiration in the old for better effectiveness in the future.

The sermon's main general focus was on the great success of the course steered by the present church administration and the grave dangers represented by those who happen to have opinions differing from the speaker's ideas. Unfortunately, there was no mention of the number of members that each year leave our church; no mention of the many young people that disappear through the back doors because they increasingly view the church and its politicians, politics, and policies as irrelevant to their lives; there was no attempt to focus on present ideas and practices that seem to be counter-productive to the church's mission, no mention of the possibilities of diverse approaches, the blessings of flexibility and necessary adaption to local needs, no focus on strengthened unity produced by diversity. Instead, the need for "respect" for church authority was stressed, implying that submission and loyalty to leaders and uniformity was the key to future success and preservation of spiritual unity.

One Ellen White quotation displayed on the screen apparently cautioned against too much education, betraying a streak of anti-intellectualism in the speaker, and served as a warning not to listen too much to academics, coupled with a warning against hermeneutics not based on the "proof text," or the "plain reading" method. The speaker may have overlooked Ellen White's important statement that "Ignorance will not increase the humility or spirituality of any professed follower of Christ. The truths of the divine word can be best appreciated by an intellectual Christian" (Testimony No. 22, first published in 1873. CE 23.1). Against this background it was interesting to hear that the speaker was introduced as Dr. Ted Wilson. So maybe we should not listen too closely to a person who attaches the letters Ph.D to his name? In some cases I would agree with this statement.

Ted Wilson's Sabbath sermon was not delivered in a vacuum — there is a context provided in the October issue of the GC Executive Committee Newsletter. It is no great secret that the GC administration's attempts to secure uniformity regarding policy compliance has been a hot potato over the past three years. The suggestions promoted for securing compliance that have been promoted since 2016 have all seen the use of coercion and punishment as the only viable avenues of securing compliance. These proposals have all been met by serious opposition from a number of private individuals and university professors, but also from a growing number of official church entities like local churches, conferences, and unions. The final document to be discussed on Sunday, October 14, was put on the agenda backed by the smallest possible majority in the General Conference and Division Officers Committee (GCDO), with 32 for, 30 against, and 2 abstains. This close vote puts on display that there is deep disagreements regarding this issue even in the inner chambers of the General Conference/Divisions administration.

Last week the GC released a statement, in the form of a Question & Answer document through Adventist News Network, as well as in the GCEXCOM Newsletter. In this document the GC tries to counter some of the concerns raised by those who have critiqued the GC's actions and proposals.

This ongoing struggle for control of the GCC agenda, the information flow, and the strengthening of a hierarchical church organization with a concentration of church authority and power in the General Conference's three-fold manifestations (in session, administration, and GCC), is the context for both the Q&A document, all the compliance documents, the system of compliance committees on all levels of the organization, and also the two speeches given by Ted Wilson, the first on Friday, October 12, and the one on Sabbath, October 13.

On Sunday, October 14, the contentious compliance document will be discussed, and probably voted on, by the GC Executive Committee. It is clear that this document enjoys very far from universal support. GC administration is, therefore, fearful of suffering another defeat. The Q&A document and the two speeches seem to all be last minute efforts to strike back in defense of the GC administration's politics.

The results of these efforts will become clearer on Sunday.