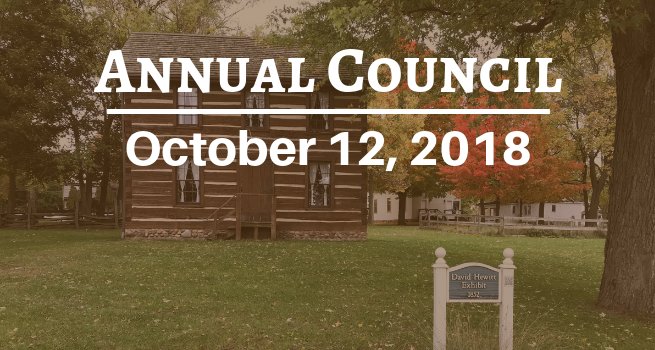 A Leadership Education and Development (LEAD) Conference always kicks off the Annual Council Meeting of the General Conference Executive Committee. Each year the subject changes. This year, in Battle Creek, Adventist history was the topic du jour, and the charm of the program was that it included tours, services, and seminars, all done in small groups. For each time block during the day, there were multiple options: bus tours of Battle Creek, walking tours of the Oak Hill Cemetery, communion services, and multiple presentations in the buildings of the Historic Adventist Village. Choosing a presentation at one time could mean missing something else that you really wanted to hear. Luckily some of the main presentations are being repeated, giving one a second chance to hear significant material on Sabbath afternoon.

To begin the day, I picked Elder Ted N.C. Wilson’s presentation on “Fearless in God’s Name!” It took place in the “Great Tent” pitched in the middle of the Historic Adventist Village. My fears of freezing while sitting outdoors in 47-degree temperatures were for naught. Space heaters kept the tent reasonably warm.

My favorite presentation of the day was given by Bill Knott, editor of the Adventist Review. In “Publish a Little Paper” he told stories about the first four editors of the Adventist Review and their passion for social justice. James White and his fiery editorials about the Fugitive Slave Act. White wrote that SDAs should resist this “evil law.” His editorials sounded a lot like the abolitionist Frederick Douglass, Knott said, so he was not surprised when he learned that the two men had lived within 300 yards of each other in Rochester, New York and probably used the same printer for the small papers that each edited. Uriah Smith’s fierce criticism of the US government for its corruption and failure to enforce racial equality. John Nevins Andrews and his creation of the SDA Benevolent Association, the precursor to ADRA. Alonzo T. Jones, the fighter for righteousness by faith who understood grace and what it meant to fall in love with Jesus. Knott read from a Jones sermon that helped him to personally rediscover grace. Riveting stories all.

But Knott began his lecture by saying that there is, “Something profoundly unfair about what we are doing here today. Every time a storyteller decides to tell a story, that story leaves out another story.” He also noted that “At times like these, we chose certain kinds of people to tell their stories — men. In a movement that owes its existence to a woman, we tell stories of people of one gender, one race, in one country.” He disparaged the "great man theory" of history, saying as though you could distill history down to just the actions of one gender. “The majority of persons belonging to this church now, and in the past have not been men, or from this area.” He paid tribute to the women who listened to all that dictation of the Review editors, the persons of color who ran the presses.

And amid all the great stories that filled the day, that acknowledgement of church members touched my heart, made the poignant singing of early Advent hymns at the evening program more sweet.